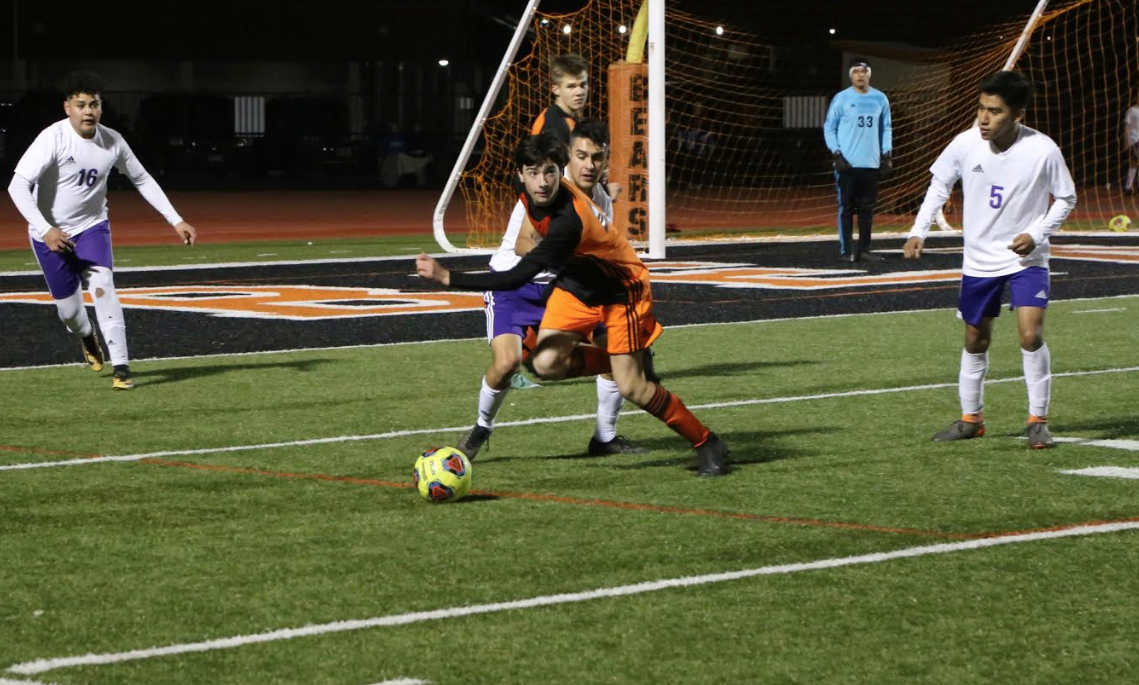 Buy Now
Bradley Peterson, number 14, for Summerville, looks for options in the attacking third as the Bears try to score on Escalon Tuesday night at Thorsted Field. 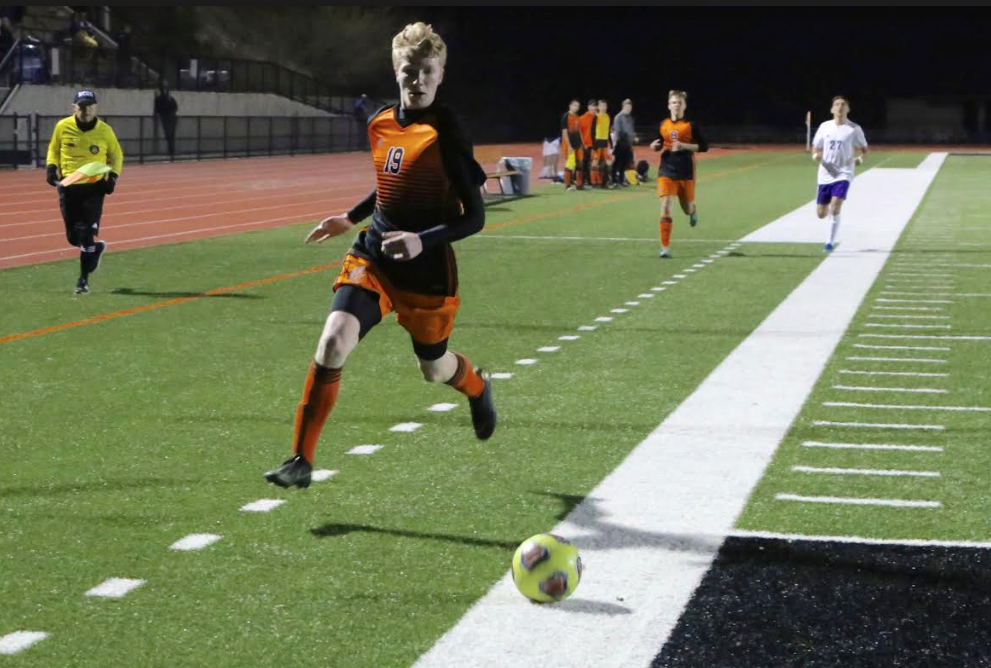 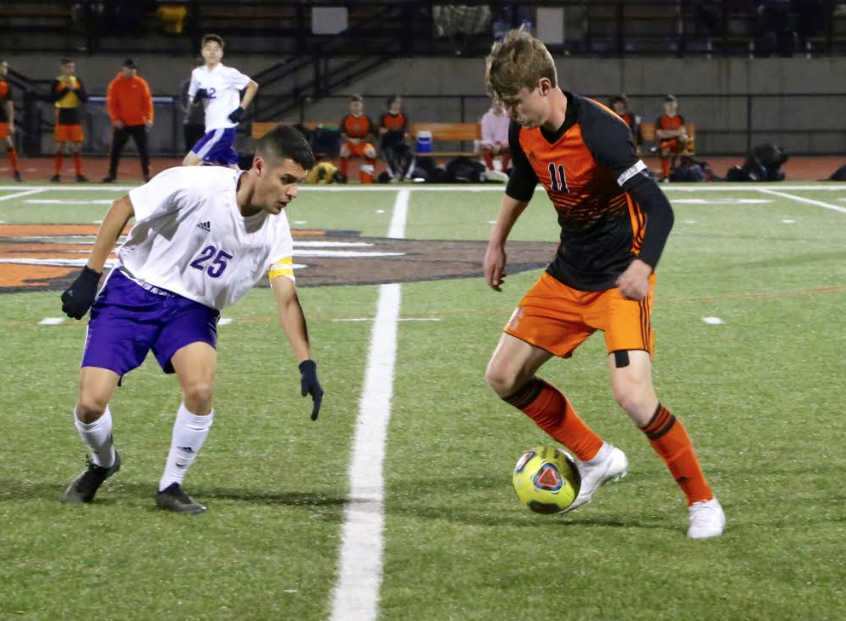 Hayden Fleming, number 11 for Summerville, goes up against Emiliano Ramirez, number 25 for Escalon, on Tuesday night at Thorsted Field.
1 of 3

Buy Now
Bradley Peterson, number 14, for Summerville, looks for options in the attacking third as the Bears try to score on Escalon Tuesday night at Thorsted Field.

Hayden Fleming, number 11 for Summerville, goes up against Emiliano Ramirez, number 25 for Escalon, on Tuesday night at Thorsted Field.

Summerville, Sonora and Calaveras were defeated in boys soccer Tuesday on the first night of CIF Sac-Joaquin Section playoffs, the Summerville soccer girls fought to a 2-2 tie against Hilmar before losing on penalty kicks, and in girls basketball Calaveras won and Sonora lost.

Altogether there were eight playoff games featuring Mother Lode League teams Tuesday night. The Calaveras varsity girls basketball team was the only one from Calaveras and Tuolumne counties to advance in their postseason bracket, when they beat Liberty Ranch 59-39 at home in San Andreas.

Summerville dominated possession and created numerous shots on goal in the first half of their home contest Tuesday night against Escalon in the Division V boys soccer bracket, and Escalon scored twice on counters to defeat the Bears 2-0 at Thorsted Field in Tuolumne.

Escalon attackers Christopher Borrego, number 14, and Alexis Rodriguez, number 7, scored late in the first half and early in the second, respectively.

Summerville playmaker Aliou Tippett, number 21 for the Bears, created several scoring opportunities, narrowly missing wide twice in the first half. Hayden Fleming, number 11 for the Bears, skimmed a shot from 20 yards just over the top of the crossbar about five minutes into the second half.

“We knew we were in for a battle,” Dave Reel, the Summerville head coach, said after the final whistle. “We were without our leading scorer, Louis Rieger. We were trying to figure things out. We had a lot of chances. We just couldn’t find the net.”

Summerville was the #3 seed in Division V. Escalon, the #6 seed, moves on #2 seed Hilmar on Thursday in Hilmar.

Summerville finished their 2019-2020 season with a share of the Mother Lode League title, which they split with Sonora in a 1-1 draw last week that left both teams tied for first in the league with season-ending 7-2-1 records. The Bears now have 10 league titles, and back-to-back Sac-Joaquin Section division titles in 2014-15 and 2015-16.

Also Tuesday night in varsity boys soccer playoffs, Sonora lost 5-2 on the road to Liberty Ranch in Galt in Sacramento County. Liberty Ranch scored twice in the first half to lead 2-0 and pulled away in the second. Sonora was the #10 seed in Division IV. Liberty Ranch, the #7 seed, moves on to play #2 seed Livingston on Thursday in Merced County.

Sonora’s share of the split Mother Lode League title this season is the first time the Wildcats have earned the right to hang a league title banner of any kind for varsity boys soccer at their school.

The Summerville varsity girls soccer team played Hilmar to a 2-2 draw after regulation, and with no goals scored in extra time the match was decided on penalty kicks, and Hilmar prevailed, 4-3.

Summerville was the #5 seed in Division V and Hilmar, the #4 seed hosted the elimination game. Hilmar advances to play #1 seed Colfax on Thursday in Placer County.

Also in Division V, #3 seed Amador’s 2-1 win over #6 Escalon sends Amador up against #2 seed Bradshaw Christian on Thursday in Sacramento.

The #3 seed Calaveras girls beat #14 seed Liberty Ranch by 20 points and they advance to play #6 seed Ripon on Thursday in San Joaquin County.

Sonora was the #13 seed in Division IV and they lost 38-27 to #4 seed Livingston in Merced County. Livingston advances to play #12 seed Hughson, who upset #5 Orestimba 55-48 at Orestimba.