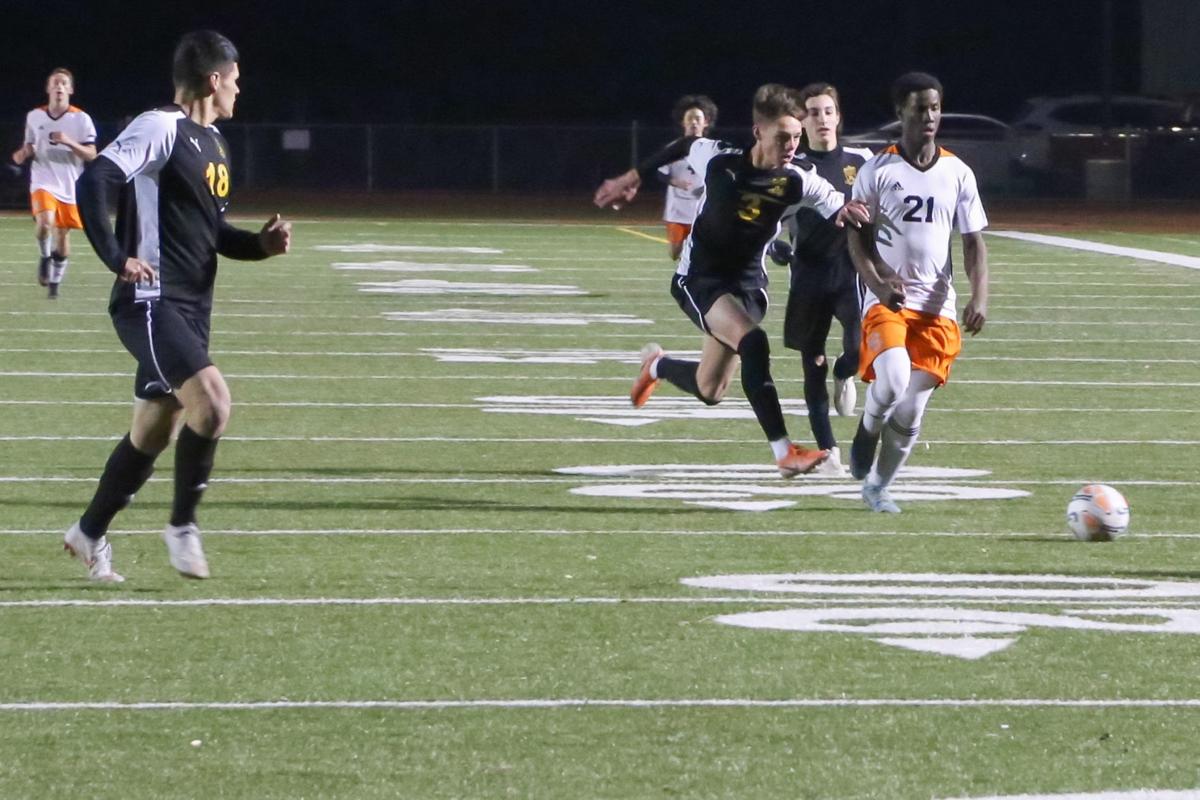 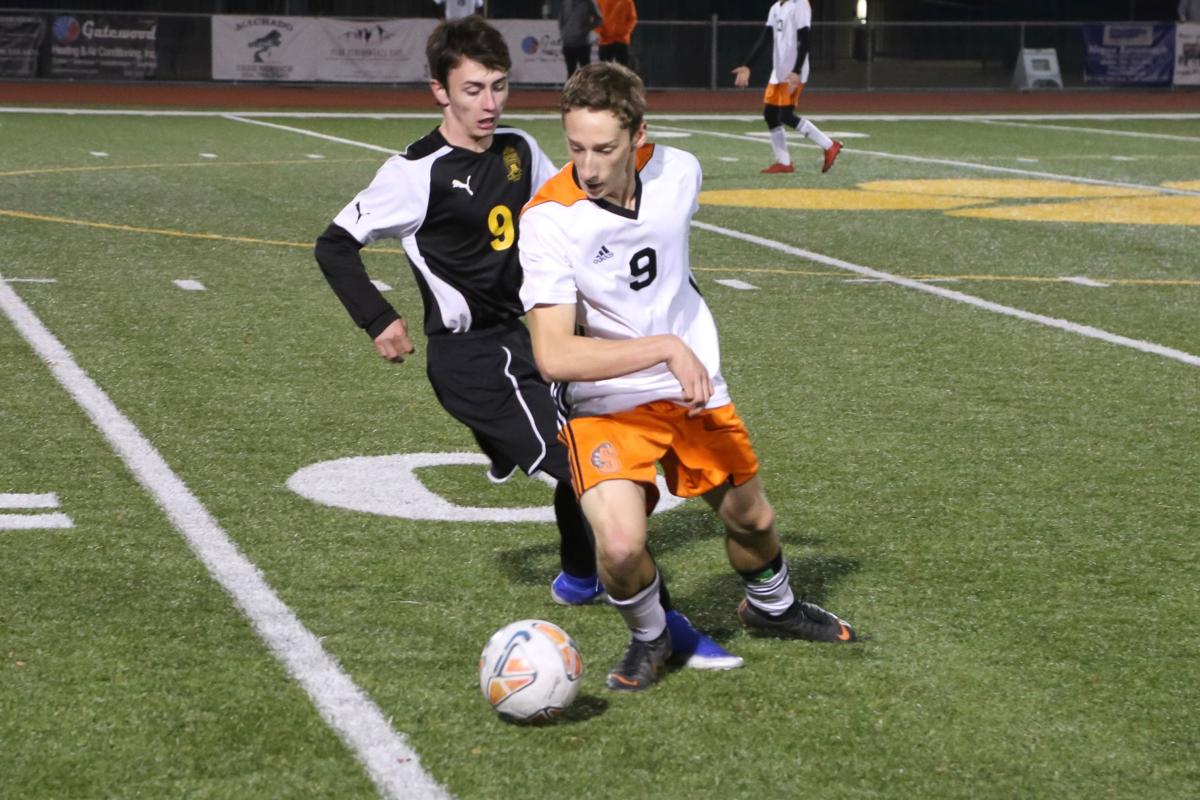 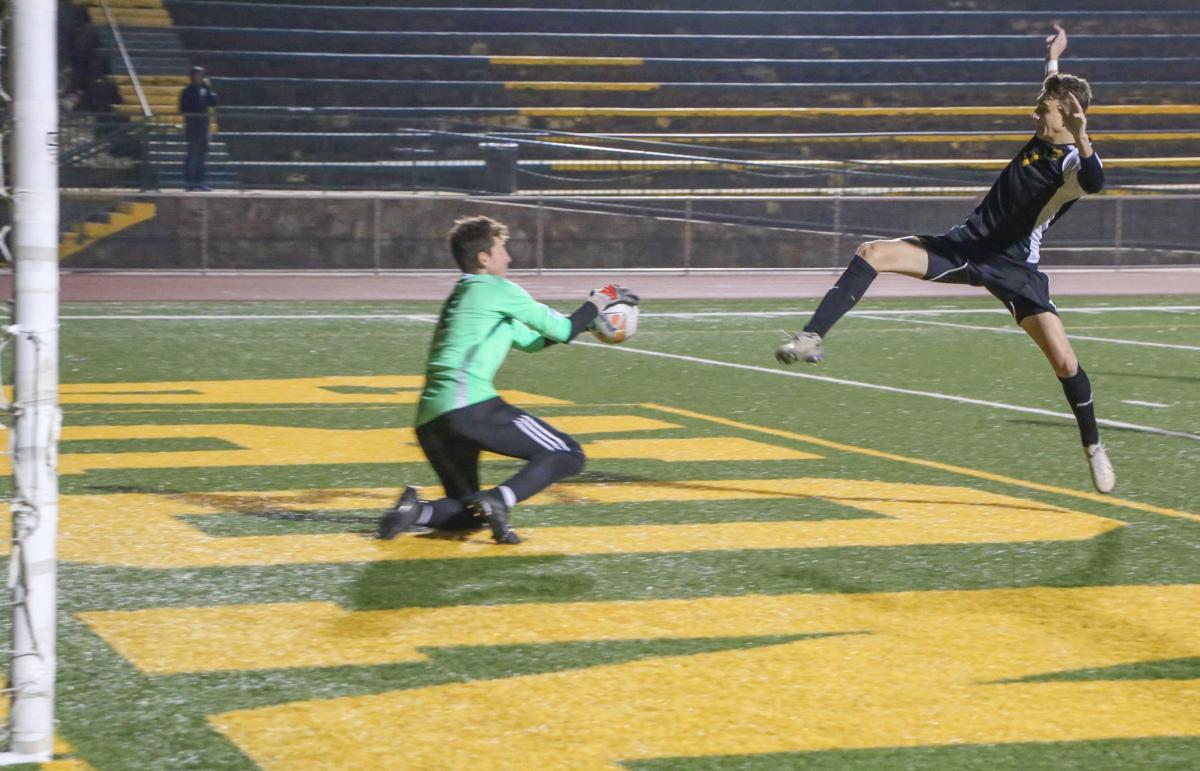 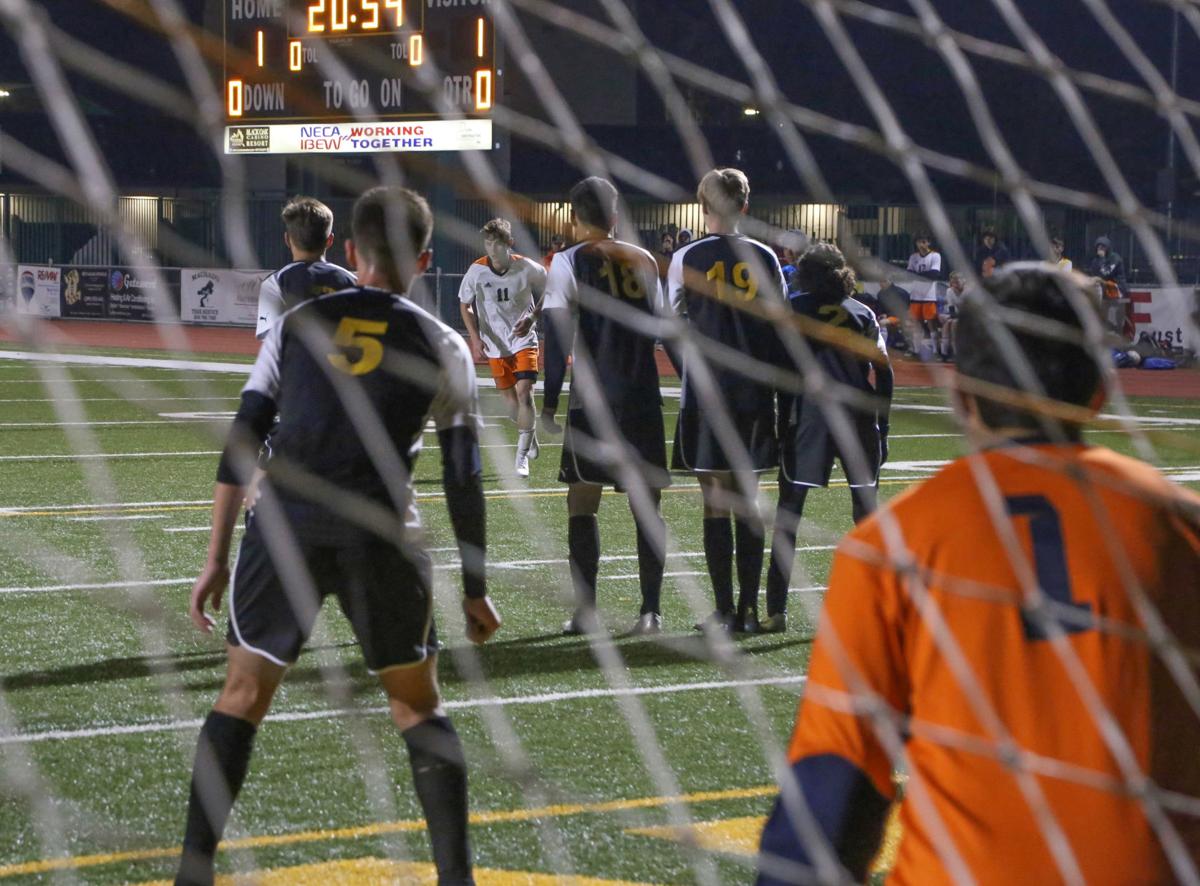 Sonora defenders, with goalkeeper Antonio Valadez, number 1 in orange for the Wildcats, prepare for a Summerville free kick with the score tied 1-1 in the second half Tuesday night at Dunlavy Field. 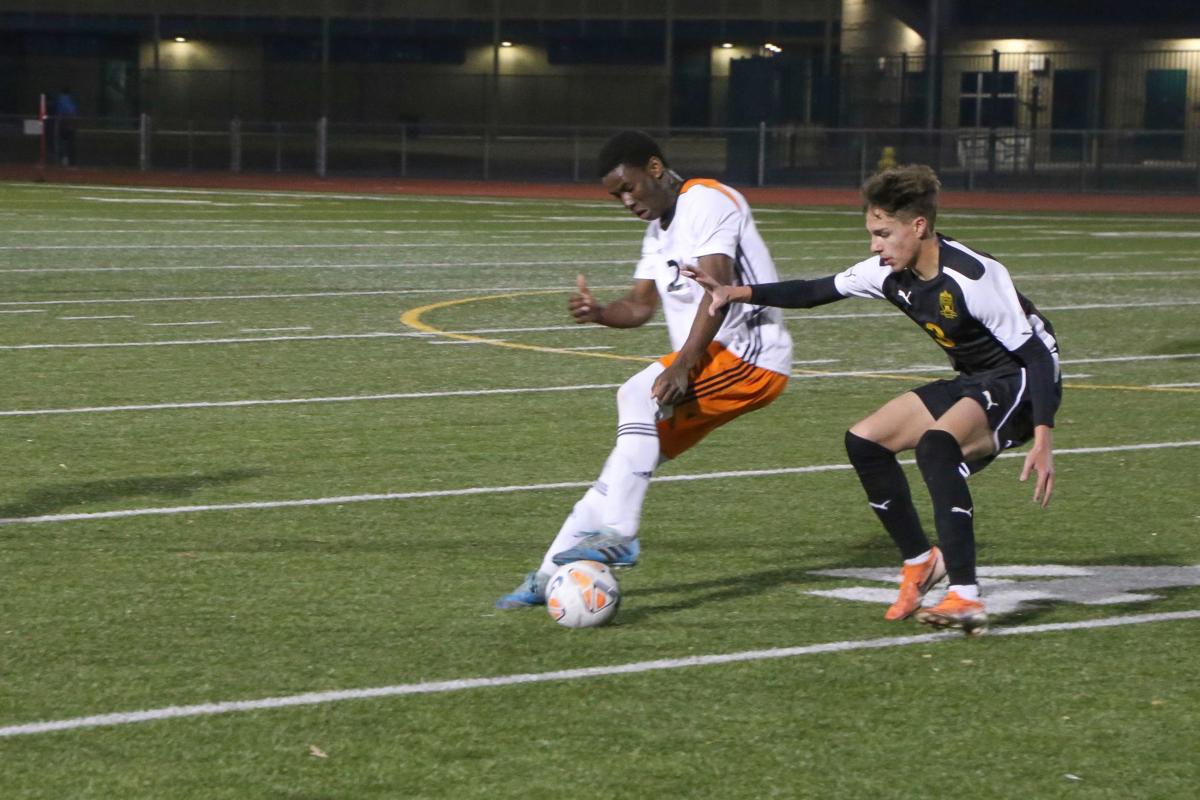 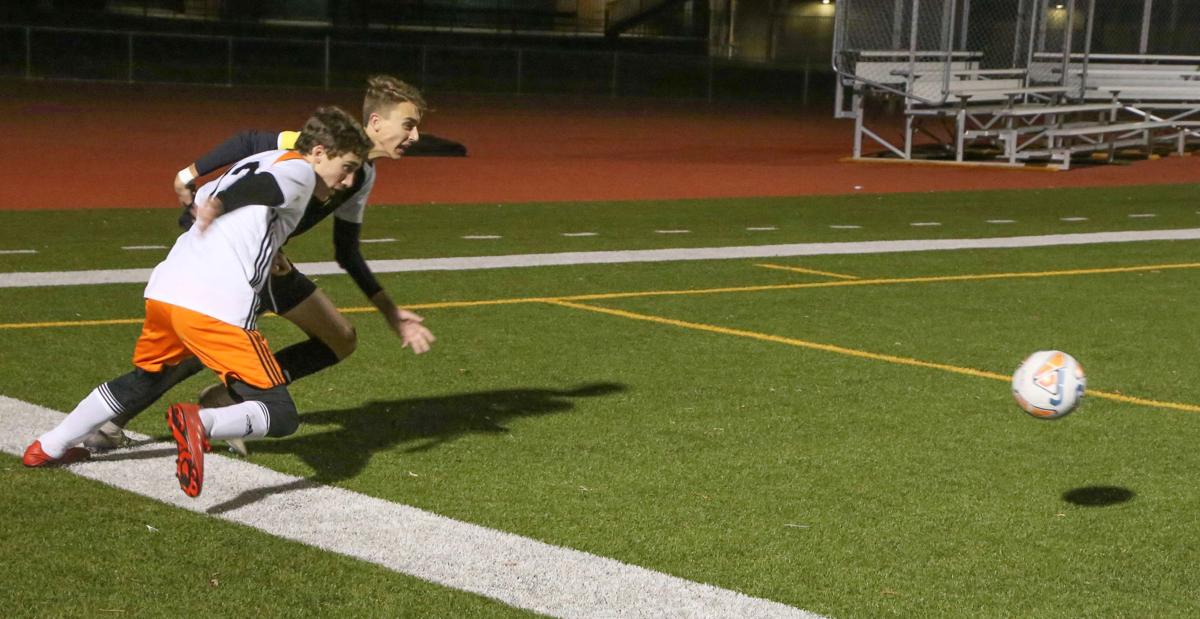 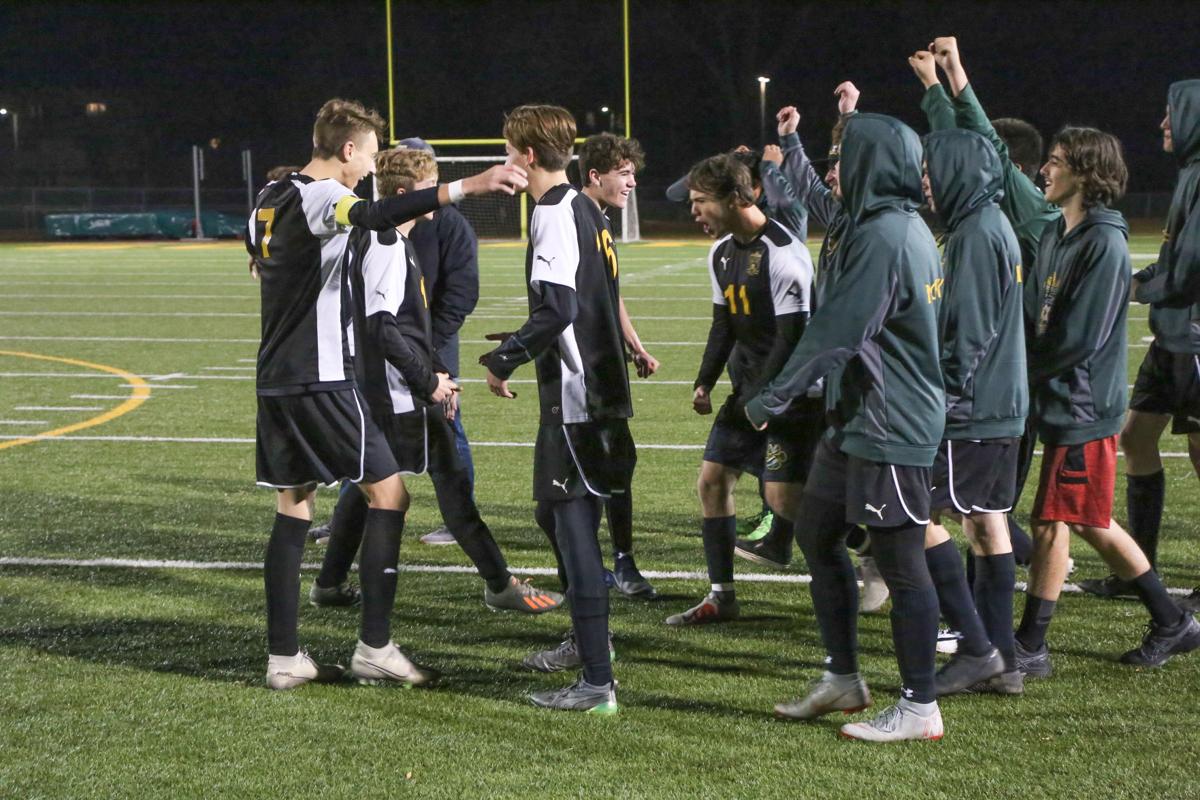 Sonora Wildcats celebrate fighting back from behind Tuesday night to draw Summerville 1-1 and earn a split Mother Lode League title, the first championship of any kind for Sonora in varsity boys soccer.

Sonora defenders, with goalkeeper Antonio Valadez, number 1 in orange for the Wildcats, prepare for a Summerville free kick with the score tied 1-1 in the second half Tuesday night at Dunlavy Field.

Sonora Wildcats celebrate fighting back from behind Tuesday night to draw Summerville 1-1 and earn a split Mother Lode League title, the first championship of any kind for Sonora in varsity boys soccer.

Bitter local high school rivals from Sonora and Summerville, many who grew up playing soccer against each other since they were little kids, battled to a hard-fought 1-1 draw Tuesday night at Dunlavy Field, splitting the 2019-2020 Mother Lode League championship title and the bragging rights that go with it.

Aliou Tippett, number 21 for the Bears, who was born in Liberia, adopted at age 4 in Tuolumne County, and learned to play soccer from scratch here in California, scored the opening goal for Summerville inside the first 10 minutes of the first half.

“The ball came off a defender and I controlled it,” Tippett said after the match. “I juggled it toward the corner and shot to the near post, under the goalie’s hand.”

The Bears on the field and on their bench exploded in unbridled elation, having taken a decisive 1-0 lead so early on the Wildcats home field.

Both sides continued creating dangerous chances with multiple shots on goal. Summerville keeper Liam Toner was tested midway in the first half when a Sonora shot came in hard and low.

“I was off my line,” Toner said after the match. “I had to dive with my right foot to clear it.”

Play was scrappy in close quarters. Players on both sides lost their patience as teammates sometimes tumbled on hard tackles, and frequent low kicks and high challenges put competitors on the turf. Match officials lectured at first, then showed at least four yellow cards as fierce competition continued.

“I was frustrated on some calls,” said Sonora midfielder Kai Perez, number 3 for the Wildcats, who contested numerous 50-50 balls in the center of the pitch and caught contact to his shins multiple times. “That’s part of the game. Even though they scored first, we didn’t put our heads down. They got tired, and we kept going.”

Early in the second half Sonora’s pressure paid off. Tyler Tipton, number 7 for Sonora, was about 30 yards from goal when a ball came over the top in his direction.

“The ball bounced and I beat a defender to it,” Tipton said after the match. “I got a touch on it, touched it again and shot with my right foot to the right upper corner.”

The ball hit the back of the net and it was Sonora’s turn to celebrate at the top of their lungs. All the frustration of trailing nearly a full half at home evaporated in an instant. The match was back on even terms with everything to play for and less than 40 minutes left.

Sonora’s keeper, Antonio Valadez, kept Sonora in the match on several occasions, including a perfectly placed head shot from the Bears that looked goal-bound.

“I was just getting ready and saw him going for the header,” Valadez said after the match. The Bears attacker had time to rear back and snap the ball arcing toward the back of the net but Valadez was in motion. “I spun off and got to the ball in time.”

At the end of regulation there was no extra time and there were no penalty kicks. This was a regular season Mother Lode League game that offered a winner-takes-all title showdown due to points both Summerville and Sonora built up in league play before Tuesday night. The 1-1 draw, left both teams tied at the top of the league with 7-2-1 records. Match officials confirmed at the end of the game the two rivals, so close and so at odds, are now Mother Lode League co-champions.

This left a bad taste for some Summerville players and supporters because earlier this season the Bears laid a 7-1 thrashing on Sonora at Thorsted Field in Tuolumne. Summerville players expect to be the higher seed when CIF Sac-Joaquin Section playoffs brackets are released later this week.

Perez and others in the Wildcats changing room said their share of the Mother Lode League title is the first time Sonora has earned the right to hang a league title banner of any kind for varsity boys soccer at their school.

“It’s a great experience being the first team to put something on the wall,” Perez said. “Even though we’re co-champions, we’re still champions. To finish 7-2-1 is a great feeling.”

Regardless of other results Tuesday, Summerville, Sonora and Calaveras will all make the varsity boys soccer playoffs that begin Feb. 17. CIF Sac-Joaquin Section postseason brackets, including seeds, opponents and match locations, are expected to be released by 4 p.m. Friday.