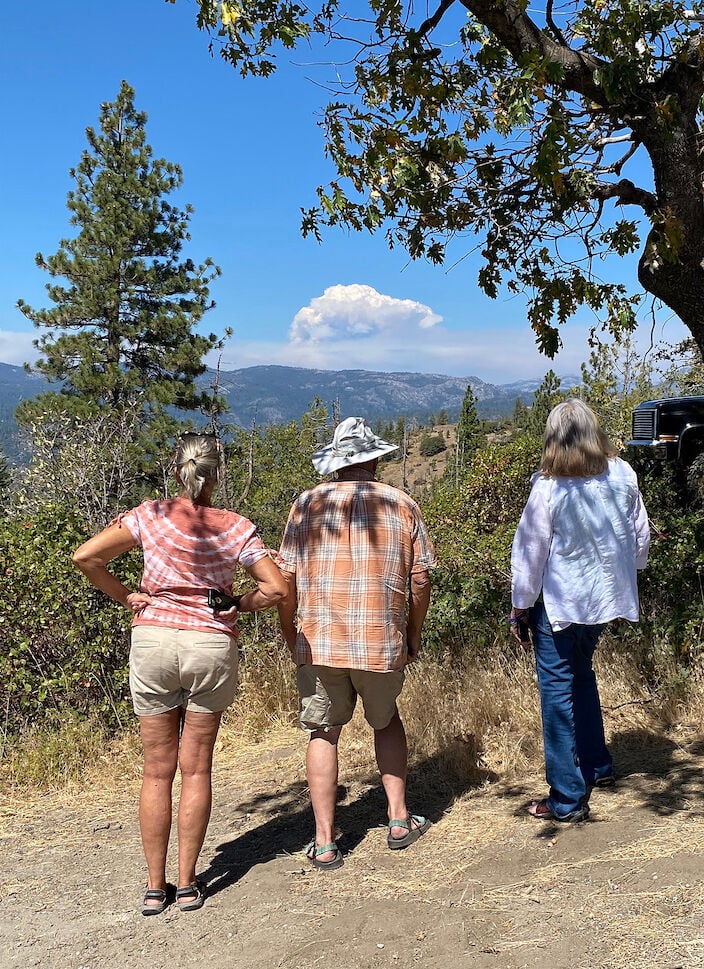 A trio enjoying the high country of Tuolumne County on Tuesday stop to look at the pyrocumulus cloud over the Caldor Fire, which on Monday forced the evacuation of South Lake Tahoe. 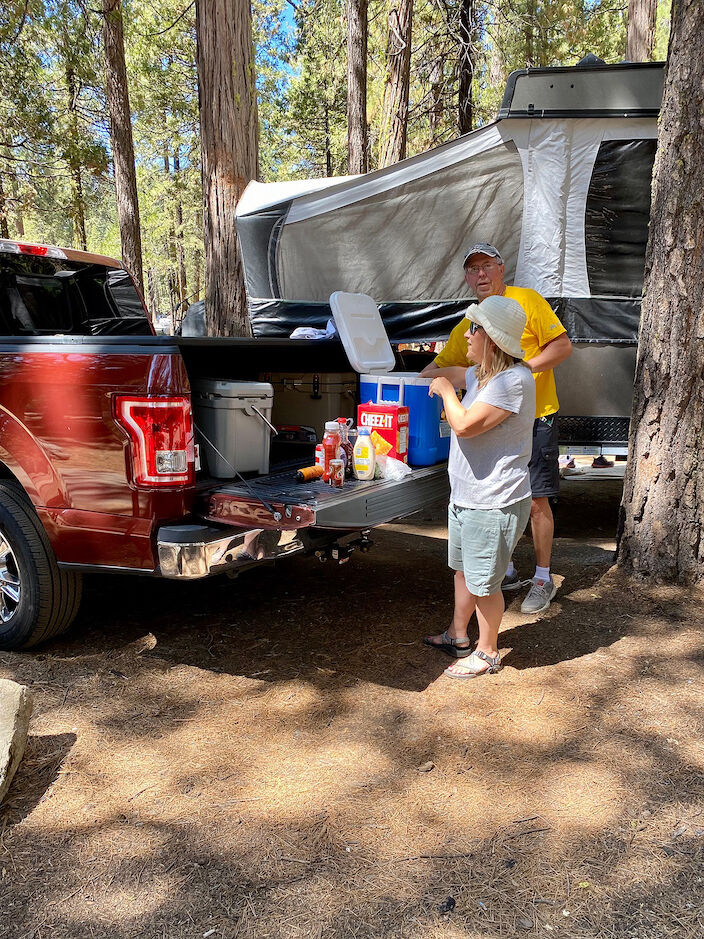 Campers James Zertuche and his wife, Rina, o American Canyon, pack up their Pinecrest campsite on Tuesday. The couple said they're OK with leaving early due to the closure of the Stanislaus National Forest and hope to find another "Pinecrest" elsewhere.

A trio enjoying the high country of Tuolumne County on Tuesday stop to look at the pyrocumulus cloud over the Caldor Fire, which on Monday forced the evacuation of South Lake Tahoe.

Campers James Zertuche and his wife, Rina, o American Canyon, pack up their Pinecrest campsite on Tuesday. The couple said they're OK with leaving early due to the closure of the Stanislaus National Forest and hope to find another "Pinecrest" elsewhere.

The closure of the Stanislaus National Forest on Tuesday night, just days before an influx of commerce, customers and campers over the Labor Day weekend holiday, has some high country business owners chafing at the massive loss of revenue.

"We're devastated by it," said Jim Lewis, owner of the Dardanelle Resort. "It's a huge hit to our revenue, to everything."

But underlying the lament in a loss of business is an explicit acknowledgment from Lewis and many others that the closure, which impacts all national forests in the state of California, was a necessary measure meant to preemptively combat potential new fires while massive wildfires rage throughout the state and burden limited resources.

"We can't really be too upset. Our resources are spread so thin,” Lewis said. “We have to help Tahoe out by releasing the available resources we do have. We're very sympathetic about it because we've been there and done that. We want to try and help any way we can."

The closure takes on another dimension for the Lewis family, who recalled the valiant firefight that helped save some of the Dardanelle Resort three years ago, just months after the family had purchased the property.

The Lewis family purchased the Dardanelle Resort in 2018, but it burned through much of the historic structures and forest during the Donnell Fire that August.

The resort was fully booked for this weekend, he said, with live music scheduled Friday through Sunday expected to pull in customers from Kennedy Meadows to Clarks Fork.

"Since we've owned this business, we haven't had a normal year yet," he said.

The United States Forest Service closed California's national forests to public access beginning Tuesday at 11:59 p.m. The closure is set to expire on 11:59 p.m. Friday, Sept. 17, meaning the forest will be closed to recreational activities through the Labor Day holiday on Sept. 6.

A violation of these prohibitions is punishable by a fine of up to $5,000 for an individual

and $10,000 for an organization and/or imprisonment of up to 6 months.

Stanislaus National Forest acting Public Affairs Officer Traci Allen said the decision was made to minimize the threat of a fire start within the forest. She cited record level fuel and fire conditions statewide and "unpredictable" fire behavior during the current summer season.

"The concern is to minimize new fire starts that have the potential for large and rapid fire growth with a high risk to life and property," she said.

The forest is at the most severe level of National Wildfire Preparedness Level, PL5, and has been since July 14, 2021, she said.

"The best way to help with this is to have a closure so we can protect the public and firefighters," she said.

She said the order might be lifted before the end date or extended based on fire conditions.

But many business owners, some of them permittees with the forest, rely on forest land for outdoor tours and recreation.

"It's not like they can reschedule. This is a 100% loss," said Seth Diemel, owner of Aspen Meadows Pack Station. "There's no active fire in the Stanislaus National Forest. Skies are blue. There's no reason to have this forest closed."

Aspen Meadows Pack Station provides overnight packs and day rides on horseback in the Emigrant Wilderness within the Stanislaus National Forest, which Diemel described as a safe, granite basin.

"They've done a lot of negative things in the name of safety in the last couple years," he said.

"It's just as possible they could have done it last weekend."

Matt Bloom, owner of Kennedy Meadows Resort, estimated they would lose out on between $70,000 and $100,000 in revenue due to the closure. Further concerning, he said, is the possibility that the closure is extended and cuts into the opening of deer season on Sept. 18.

"These are broad stroke closures for land," he said. "What they should do is be more site specific… fire danger above 7,000 feet is pretty minimal."

Kennedy Meadows is at 6,200 elevation, he said, but their pack trips extend into wilderness areas.

At the resort, the cabin, restaurant and store will be open, as will one-hour rides, but on county-owned land.

Judith Vaitys, owner with her husband of the Strawberry Inn east of Pinecrest Reservoir on Highway 108, said their rooms, restaurant and bar would be open over the Labor Day holiday.

But she has already received cancellations from lodgers who now will not be able to enjoy nearby recreation spots such as Pinecrest or Beardsley reservoirs, she said.

“How busy will we be? I don't know, but it's a tragedy because it’s the last holiday before the season closes, and that will affect your bottom line,” she said.

Lisa Mayo, president and CEO of Visit Tuolumne County, acknowledged the public safety priority, but said it was "sad" that forest businesses would be shut out of operation over the holiday weekend

"I hope that they can find alternatives," Mayo said. "We are working on a blog of some alternative things in our area, that's something folks can look forward to."

Jeff Hauff, director of marketing and sales at Dodge Ridge, said the skiing resort, which manages campgrounds at Pinecest, Brightman Complex, Fraser Flat, Clark Fork, among others, supported the Forest Service's decision as an effort to prevent additional fires.

"A huge thank you to the firefighters battling these blazes," Hauff said in an email. "Living in the mountains, we know what it means to respect the services of our firefighters. Our hearts go out to the many people affected by these fires, and we fully support our firefighter's efforts."

Gary Ellenbolt with Caltrans District 10, which manages Highway 108, said the National Forest restrictions do not limit travel on Highway 108 at this time.

"Caltrans recommends the public stay informed regarding any unforeseen road closures due to potential wildfires," he said in an email.

The national forest closure so far has not impacted Yosemite National Park, which is managed by the U.S. National Park Service.

Yosemite posted on its Facebook page Tuesday that the park is open with reservation requirements and fire restrictions in effect below 8,000 feet. The park makes various allowances for wood and charcoal fires, smoking, and gas and alcohol stoves, which are available through its website.

According to the USFS website, an original order which included nine national forests, but not the Stanislaus National Forest, was originally set to expire on Sept. 6.

Exempt from the current orders are people with special permits, federal, state and local peace officers, members of rescue or firefighting forces, specialized workers with authorization. Landowners and lessees and residents are exempt to the extent necessary to access their land.

People engaged in business, trade and occupation are not considered exempt, but may use roads as necessary to carry out their business.