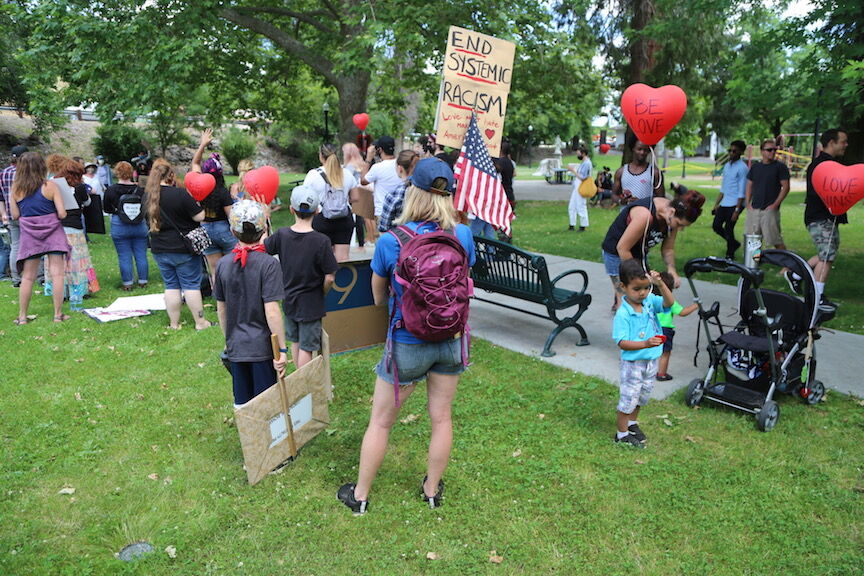 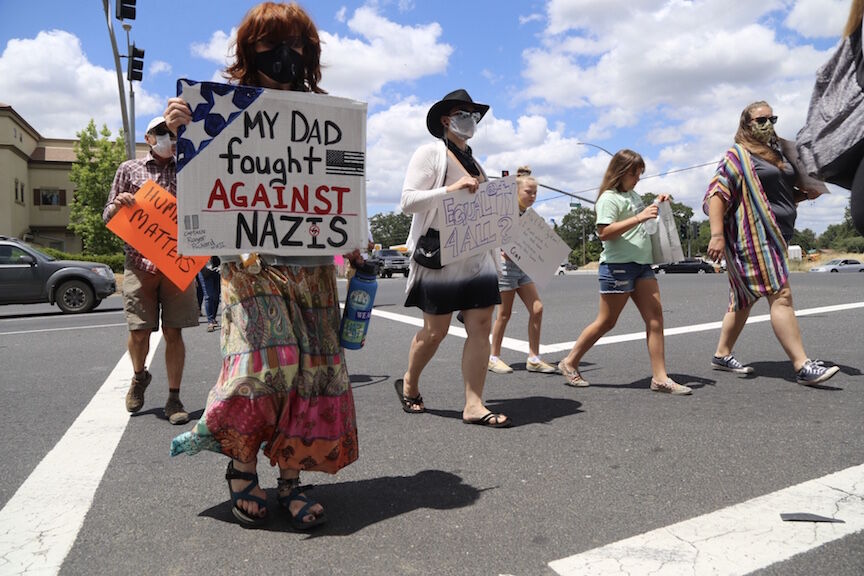 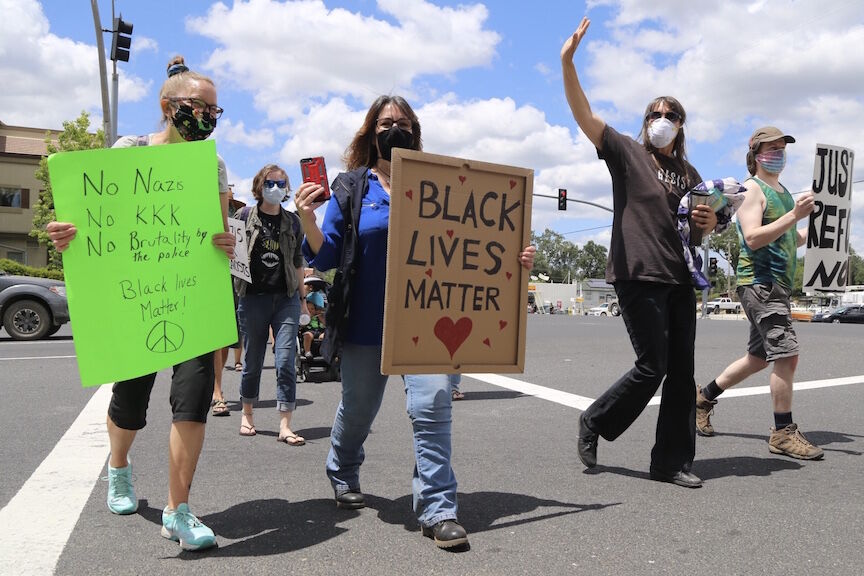 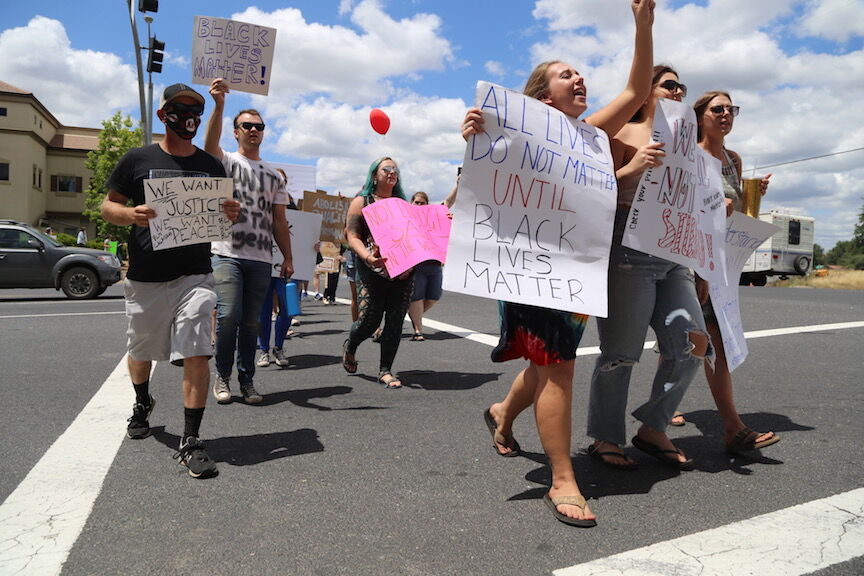 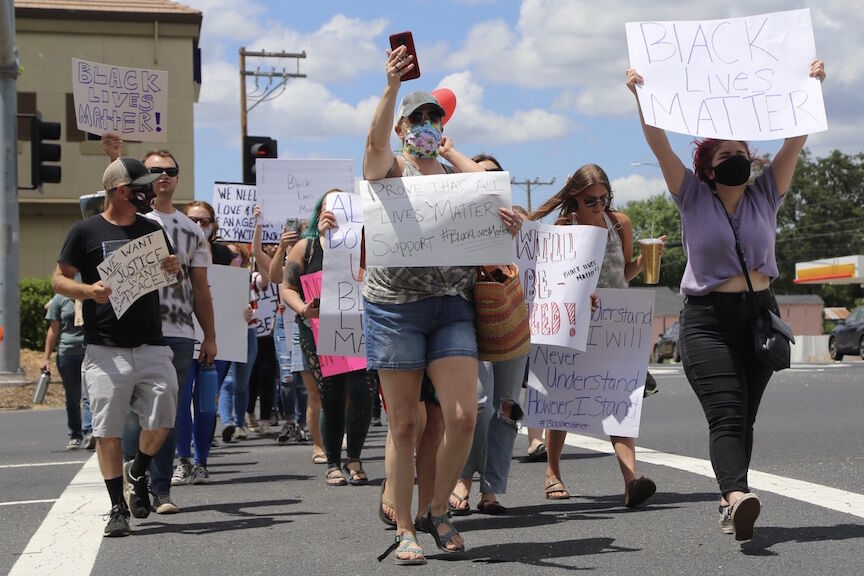 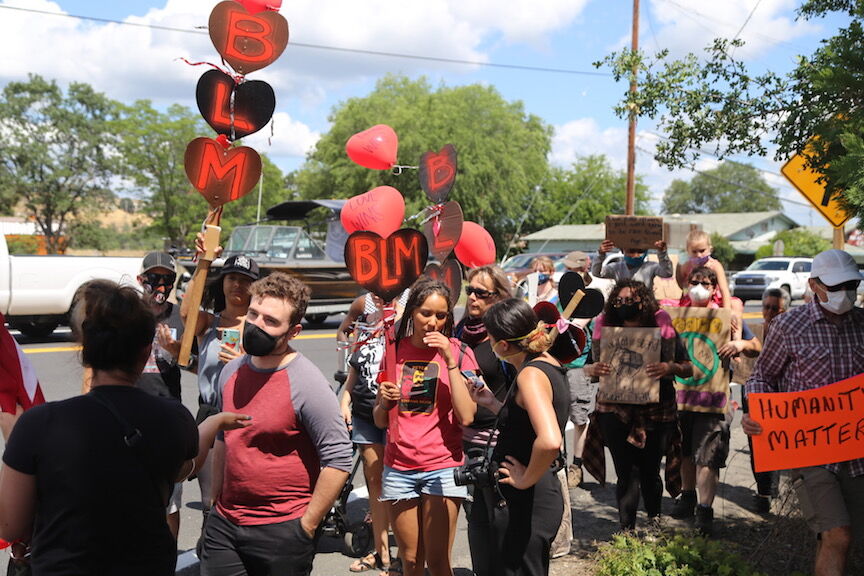 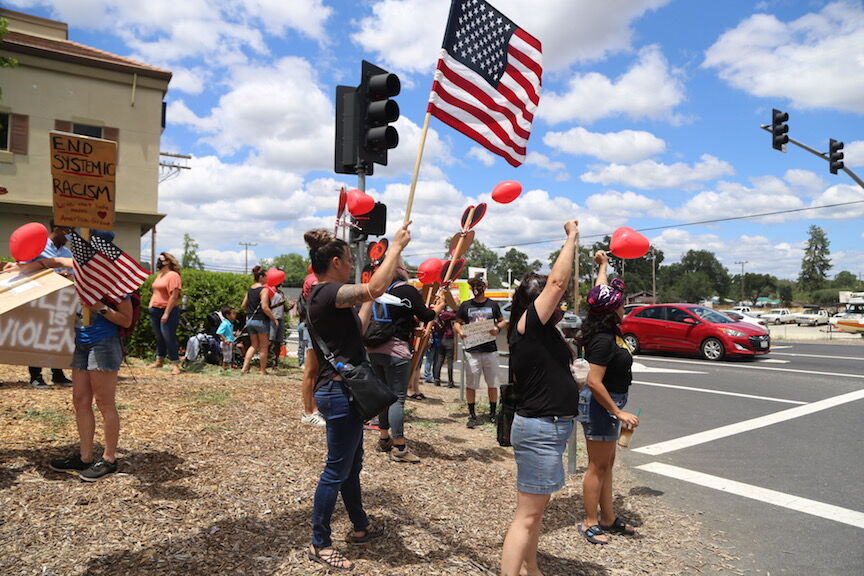 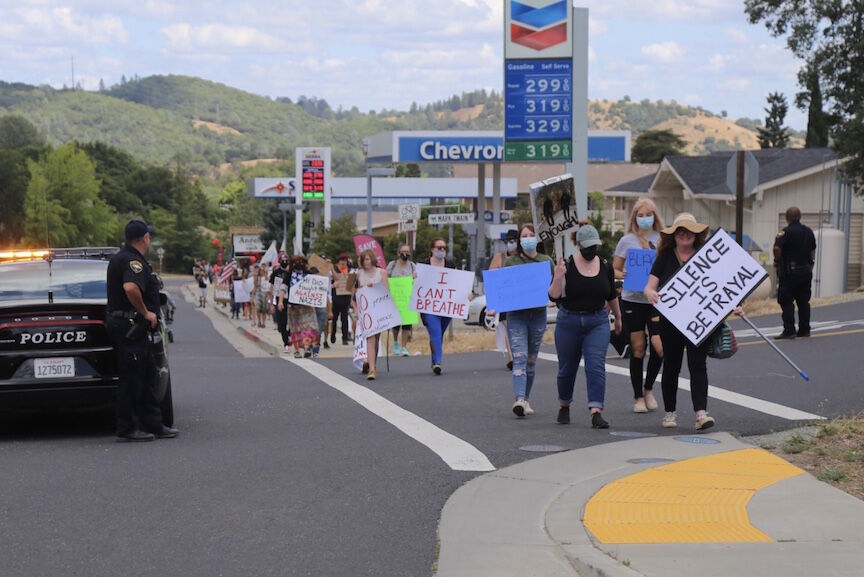 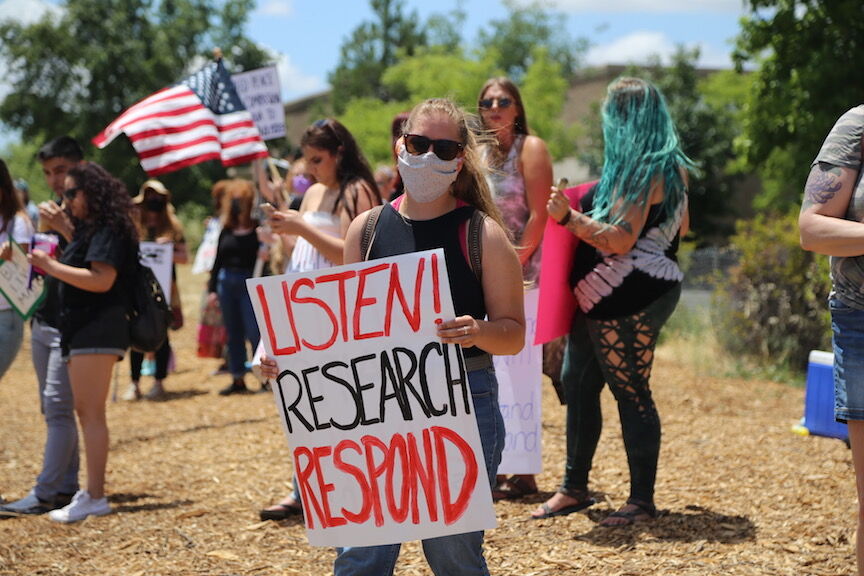 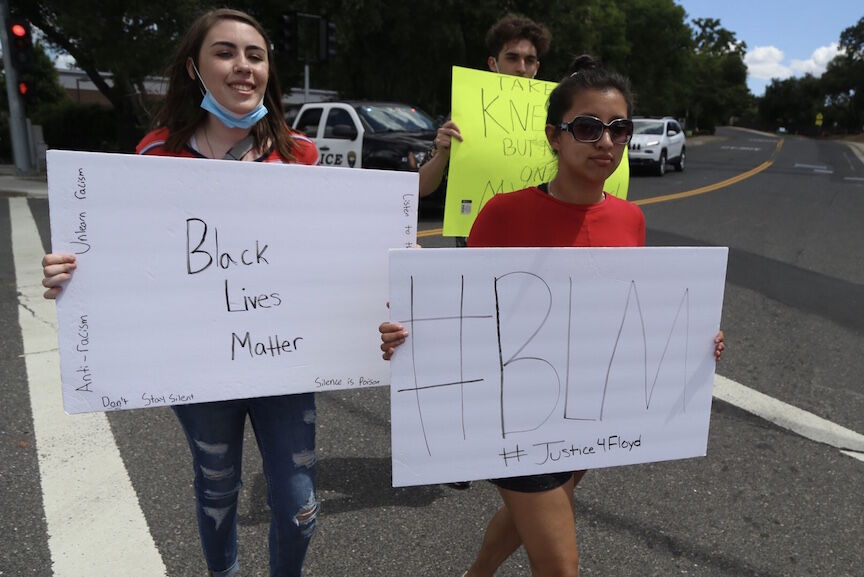 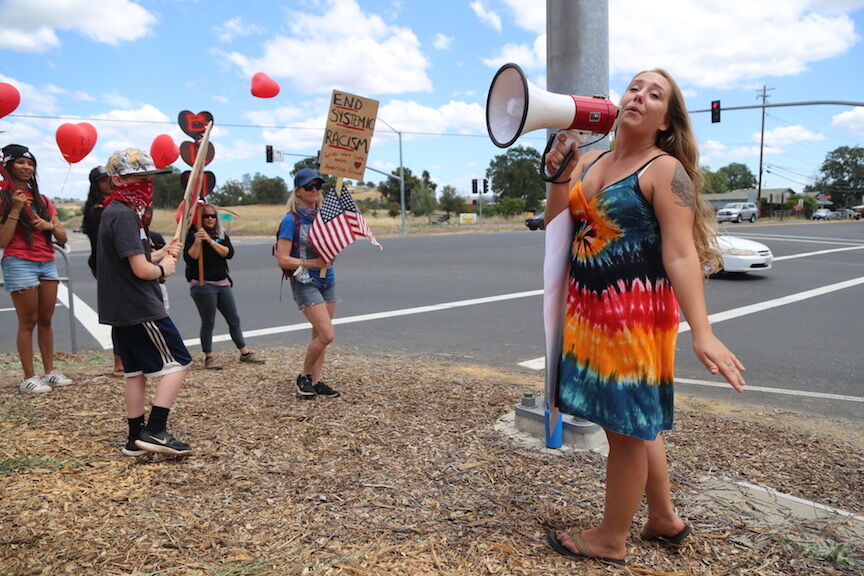 About 100 people took part Saturday in a second Black Lives Matter demonstration in Angels Camp, and they marched from Highways 4 and 49 in the north end of Angels Camp south down to Utica Park near old downtown, then marched back up to the highway intersection near Starbucks and McDonalds.

“I came today to support my fellow colored brothers and sisters,” Copperopolis resident Tiffany Garcia, 18, who graduated from Calaveras High School with the class of 2019, said during the march that ended about 3 p.m. “In order to make a change and stand up for what is right, and to make sure what happened to George Floyd never happens again.”

Like Friday’s protest in Angels Camp against police brutality and racial injustice, Saturday’s demonstration was peaceful and vocal. Many motorists honked their horns and yelled to show support. A few motorists remarked “all lives matter” as they drove past. There was no organized opposition to the protesters as there was Wednesday in Sonora.

“This is such a proud day for our community,” Kassidi James, 21, of Angels Camp, one of the co-organizers of the Saturday protest, said in a brief speech at Utica Park. “We’re not looters, we’re not rioters. We’re here to speak up against the system. Because of these rallies, things are being changed.”

Cara Mello, 45, of Arnold, told the marchers in Utica Park, “This is the most diverse, tolerant generation in history.”

William Canning, 72, of San Andreas didn’t march but he stood on Main Street, also known as Highway 49, with his hat over his heart when the marchers walked by.

Protesters nationwide are voicing their opinions on the May 25 death of George Floyd in Minneapolis police custody and systemic racial injustice.

Earlier Saturday, Katie Freeman, 23, of Sonora, and a Summerville High School graduate in 2015, stood at Highways 4 and 49 and said, “It’s important for me as a white person to be out here protesting against police brutality on black people, and to let them know I’m here if something like that happens around here.”

Before the march began, Angels Camp police officer Robert Moncada was standing outside his patrol vehicle just south of the protesters at Highways 4 and 49, when a black man on a BMW off-road motorcycle pulled up, held out his fist for a bump with Moncada, and the motorcyclist said, “Thanks a lot for being out here.”

Numerous deputies and police officers monitored the protest and march Saturday. Two deputies rode four-wheel all-terrain vehicles behind the marchers. The marchers waved to police who came to Utica Park and kept their distance from the protesters, who shouted, “Thank you!” and “God bless America!”

No significant incidents or arrests were reported from the Friday and Saturday protests in Angels Camp.

The original organizers of the Friday protest in Angels Camp, Claudia Loomis, 19, and Riley Lowell, 18, both Bret Harte graduates in 2018 and 2020, respectively, said they received threats earlier this week and decided to cancel. Then James scheduled the Saturday protest, and some other activists decided to go ahead with the Friday protest. That’s why there were protests two days in a row in Angels Camp, James said Saturday. She said the idea for the Saturday protest started with her friend, Isaac Gibbs, 19, a 2019 graduate of Bret Harte.

“I think you can’t do this too much anyway,” James said before the march began. “Yesterday was peaceful and I think today will be just as peaceful. We were here yesterday, too.”

Asked if she’s had any experience with racism, James said she has through her personal relationships.

“My daughter is black,” she said. “There’s not a lot of black people in Calaveras County. There were two African-Americans in my graduating class, 2016. This county has a stigma of being racist because there’s so many white people and not a lot of diversity.”

Before the first protest in Angels Camp on Friday, the town council met and approved a state of emergency through Thursday and imposed a curfew from 8:30 p.m. to 5 a.m. Friday and Saturday. The Angels Camp council included an option to have the curfew extended if Angels Camp chief of police Scott Ellis and the city administrator agree.

“We support the right to free speech and peaceful demonstration and will work to provide a safe place for everyone's voice to be heard,” Ellis said in a social media post. “Help us keep the demonstrations peaceful by promptly reporting any situation, or potential situation, that may threaten life and/or property. . . . We expect the demonstrations to remain peaceful and are ready to address any unforeseen circumstances that may arise.”