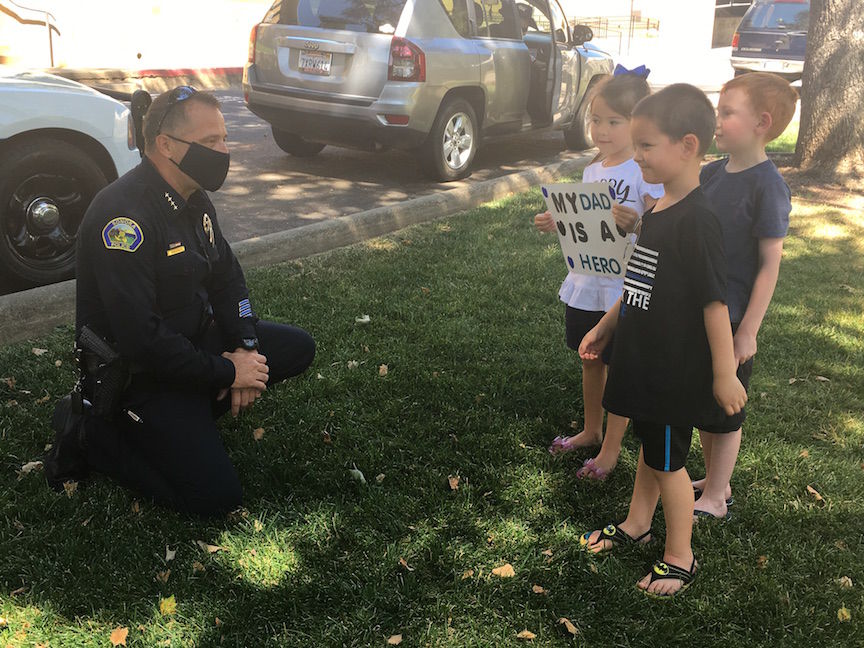 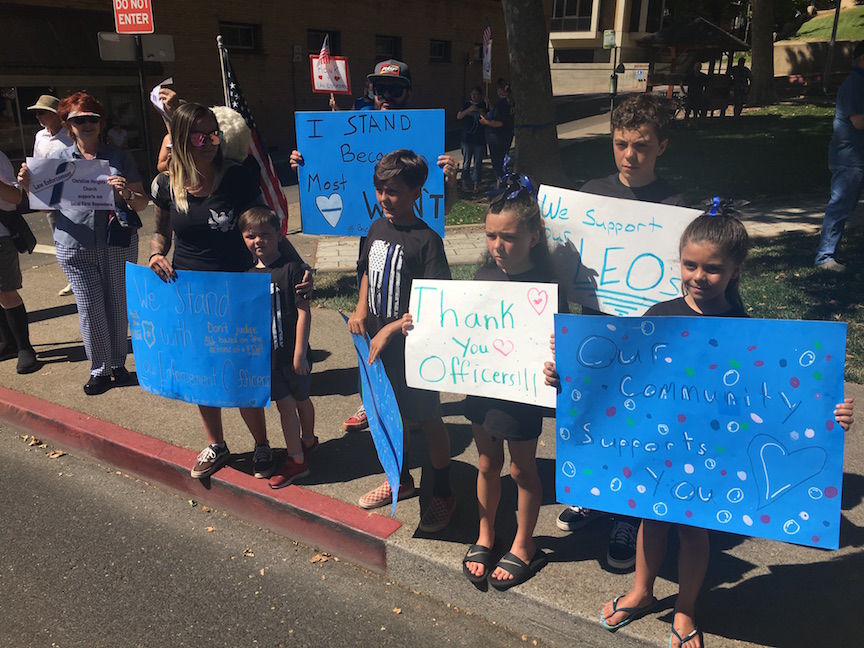 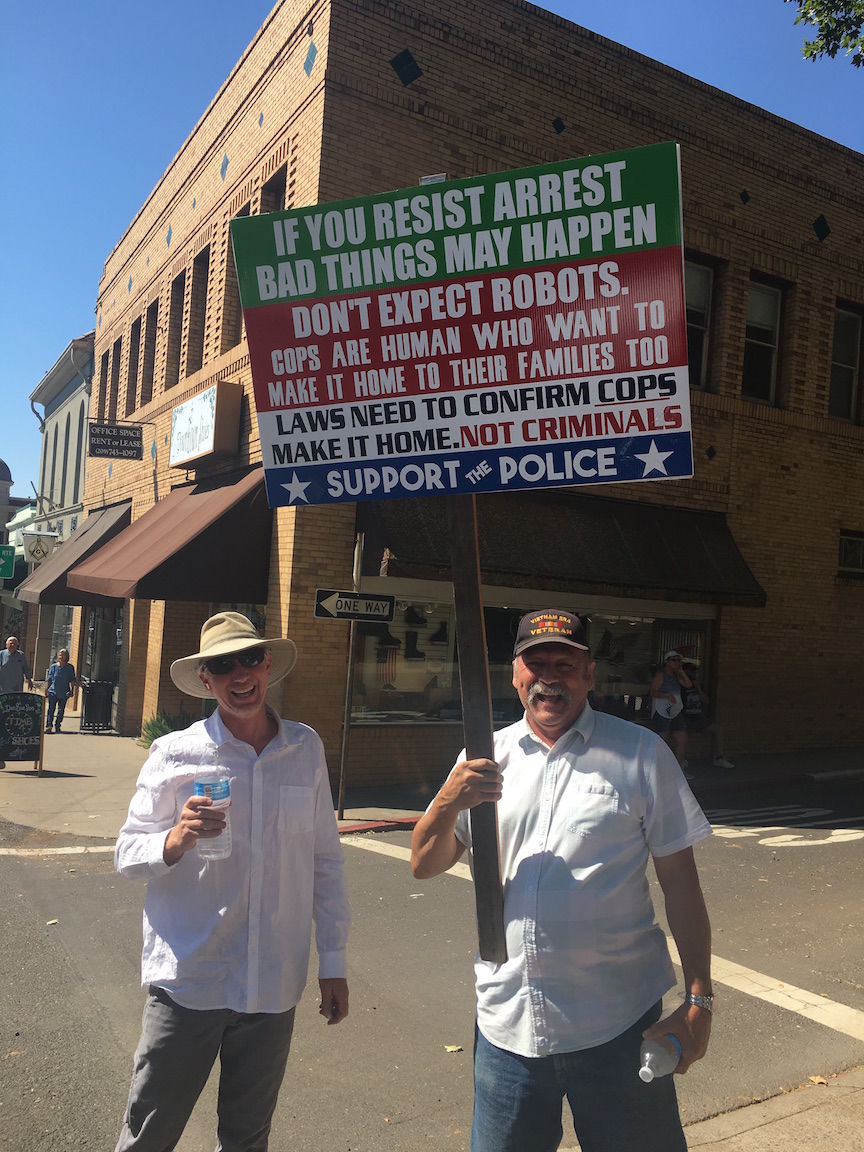 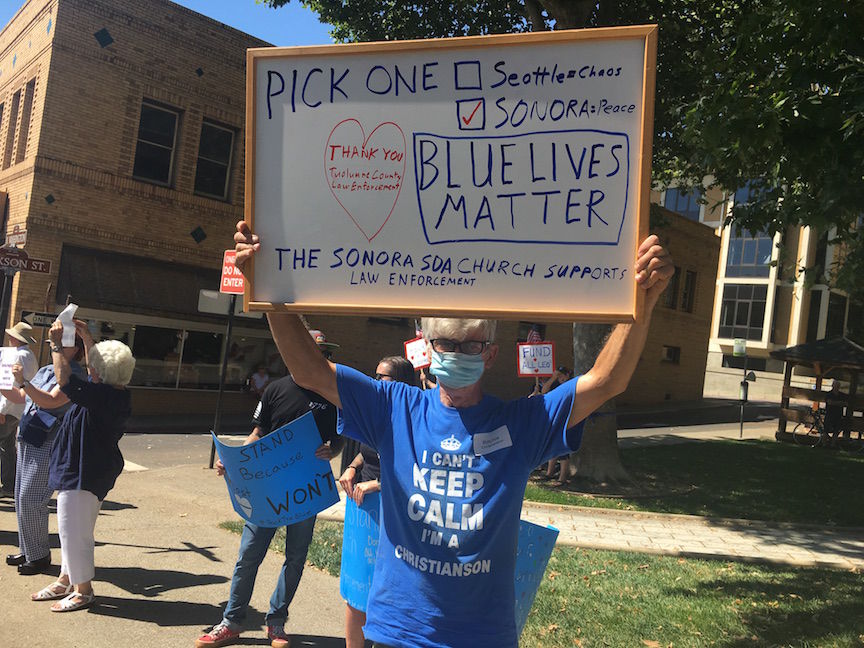 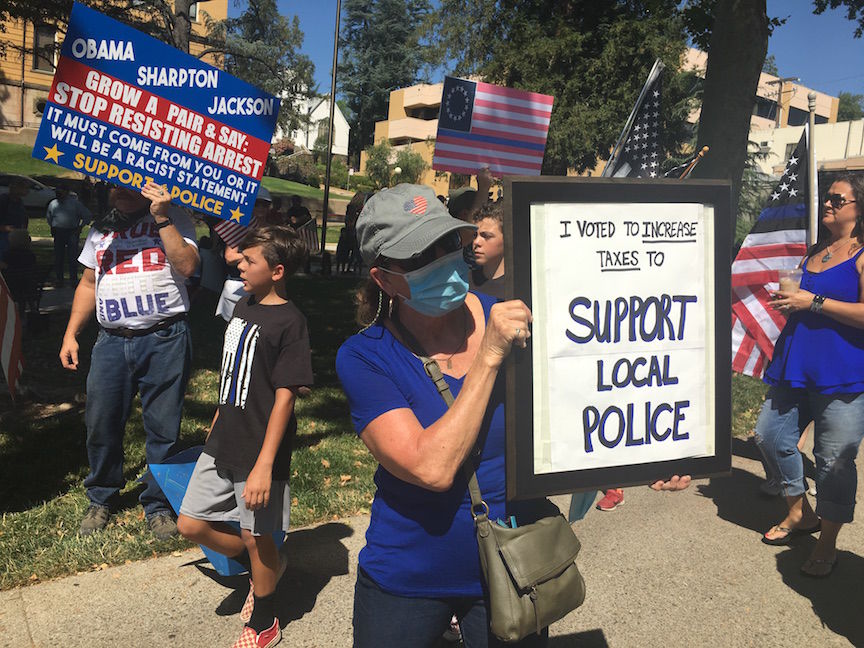 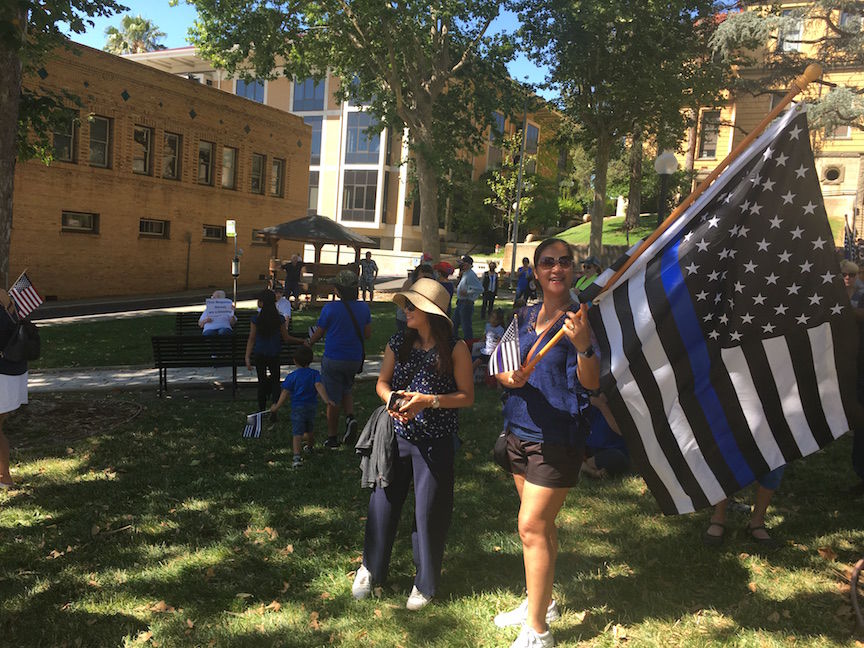 Cherrylyn Curd (right, holding flag), 43, of Twain Harte, and her friend Marife Wood (left), 35, of Sonora, said they attended Saturday's rally to support friends who are local law enforcement officers, their families, and other officers in town. 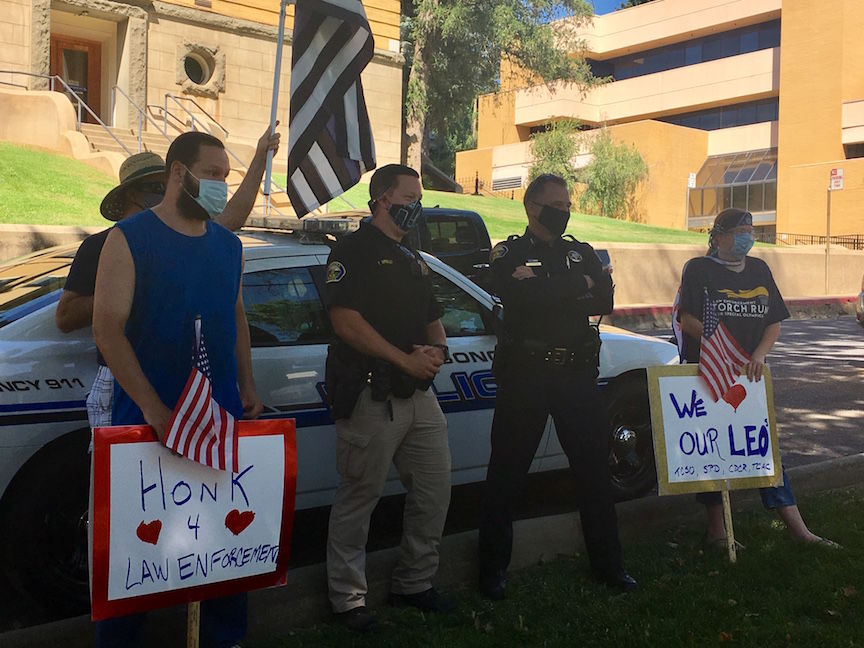 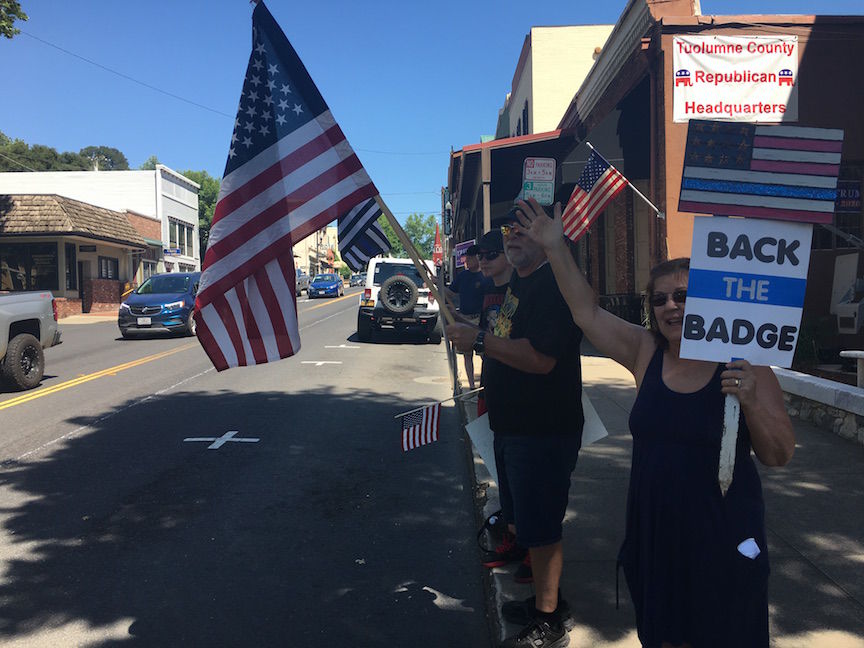 Debbie Corey (holding Back the Badge sign), of Sonora, waves at vehicles passing on Washington Street in downtown Sonora honking in approval of a rally Saturday morning to show support for local law enforcement. 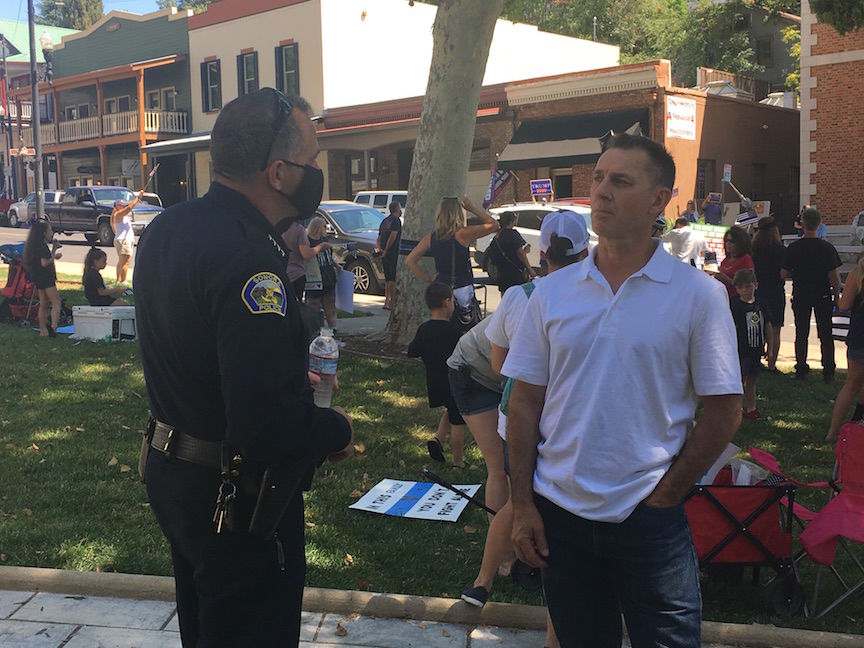 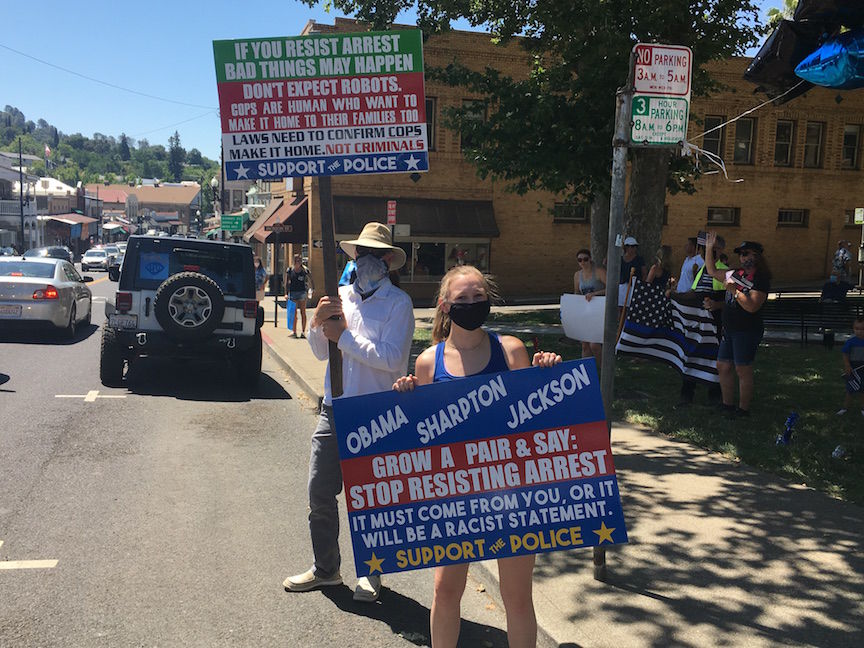 Kate Hovatter, 18, of Sonora, holds a sign for vehicles passing on Washington Street while attending a rally Saturday morning at Courthouse Square in downtown Sonora to show support for local law enforcement.
1 of 10

Cherrylyn Curd (right, holding flag), 43, of Twain Harte, and her friend Marife Wood (left), 35, of Sonora, said they attended Saturday's rally to support friends who are local law enforcement officers, their families, and other officers in town.

Debbie Corey (holding Back the Badge sign), of Sonora, waves at vehicles passing on Washington Street in downtown Sonora honking in approval of a rally Saturday morning to show support for local law enforcement.

Kate Hovatter, 18, of Sonora, holds a sign for vehicles passing on Washington Street while attending a rally Saturday morning at Courthouse Square in downtown Sonora to show support for local law enforcement.

After the Public Health department announced Friday night that some of the new cases of coronavirus were tied to four events, the Tuolumne County Board of Supervisors sent out a news release saying they “implore” the public to not demonstrate or have gatherings.

They asked the “public to make intelligent choices.”

About 100 people gathered in Courthouse Square Saturday for a previously scheduled rally to support police. Many said they had not heard the supervisors’ statement, which was released after 8 p.m. Friday.

Few wore masks and many did not practice social distancing. Sonora Police Chief Turu VanderWiel said he and Officer Thomas Brickley were wearing masks on Saturday to set an example and encourage others in the community to wear them, but he agrees with Tuolumne County Sheriff Bill Pooley that it’s not a “criminal enforcement” issue.

“Anything to slow the spread and help us get back to some semblance of normalcy,” he said.

VanderWiel was one of many at the rally who said they had not heard about the supervisors' press release.

“We’re not going to tell anybody they can’t express their freedom of speech, regardless of their beliefs,” he said.

Another demonstration is planned for Sunday in support of Black Lives Matter. The organizers said they planned to move forward despite the news release from the board.

There have been several other demonstrations — one a large gathering in Courthouse Square on June 3 to support Black Lives Matter during which another group gathered across the street and said they were looking for outside agitators and wanted to protect downtown Sonora.

If there were people from outside the area, they did not make themselves known and the event went off with no violence other than shouting. An exact count was not made but many people did not wear masks or practice social distancing.

There have also been gatherings in Courthouse Square to protest businesses being forced to close and to celebrate Pride month.

Seven cases of coronavirus were announced Thursday, the high for a single day. No cases were announced Friday but Public Health said the results of many tests were not available yet. The total cases are now 22.

“We are concerned that any mass gathering will result in additional cases, pose a harm to vulnerable populations and overwhelm our local health care system,” the supervisors said in their statement.

Gatherings protected by the Constitution such as religious services and protests are allowed but attendance is limited, people must wear masks and practice social distancing as ordered by the state and county health department.

Law enforcement has taken no action against people who don’t follow the rules other than “educating” them about the orders.

The rally was intended by organizers to show appreciation for local law enforcement and not serve as a counter-demonstration to the recent ones supporting the Black Lives Matter movement.

VanderWiel handed out sticker badges to many of the young children who were in attendance with their parents and posed for photos with some holding signs that said “Honk 4 Law Enforcement” and “We Love Our LEOs.”

“It reflects the kind of community we have and know we have here,” he said of the rally.

Rebecca Bell, of Sonora, is the wife of Sonora Police Officer Mikale Bell and attended the rally with their children, Rachel, 6, and Logan, 5.

Bell said her husband wasn’t able to attend after working an overnight shift, but the support from the community meant a lot to her family.

The previous Black Lives Matter protests at the park didn’t bother Bell because she felt they were all peaceful and led to conversations between people with differing views.

There wasn’t a presence of counter-protesters at the rally on Saturday as there have been at two of the previous Black Lives Matter protests, nor did people drive by flipping them off or making derogatory remarks.

One woman wearing a face mask walked through the crowd at one point chanting “Black Lives Matter” with a man, who was also masked, carrying fresh strawberries that appeared to be from the farmers market that was running concurrently a couple blocks away on Stewart Street.

Debbie Corey, of Sonora, stood across from the park in front of the Tuolumne County Veterans Hall holding a sign that said “Back the badge.” She said she believed the only reason the previous protests remained peaceful were due to the “men lining this side of the street.”

Corey also said she believed that the rally on Saturday was smaller than the June 3 Black Lives Matter protest because “the antifa are being funded by (George) Soros,” the billionaire philanthropist and Democratic Party donor.

“I’m tired of having the Black Lives Matter have the only say,” she said. “This is America, and we have just as much of a right to uplift, undergird, and encourage our police.”

Destanie Smith, 30, of Sonora, organized the event and brought along her five children ages 5 to 14, who all wore apparel and held signs supportive of law enforcement along the sidewalk as many vehicles drove by honking in approval of the demonstration.

Smith said that she was aware of the risks from gatherings due to the coronavirus, but felt that it was worth it for people to express their beliefs.

“It shows how well our community can pull together to support what’s important, whether it be BLM or law enforcement support,” she said.

Kate Hovatter, 18, of Sonora, said she attended the event on Saturday because she enlisted in the U.S. Air Force Reserves and believes that supporting law enforcement is important because it would be “extremely chaotic if they weren’t around.”

She held a sign she said was made by someone else that urged former President Barack Obama and Black civil rights leaders Al Sharpton and Jesse Jackson to “Grow a pair & say: Stop resisting arrest. It must come from you, or it will be a racist statement.”

“Don’t resist and do the right thing,” she said of the meaning behind the sign.

Stefanie Reichle, of Jamestown, wore a face mask and held a sign that said “I voted to increase taxes to support local police.”

Reichle said the sign was in reference to local tax measures that failed in the March 3 primary election after she heard Sheriff Pooley speak to the League of Women’s Voters about his department’s limited resources.

“I want people to put their money where their mouth is,” she said. “They voted down the tax increase that would have provided more funding for the police.”