Sign Up
Log In
Purchase a Subscription
You have permission to edit this article.
Edit
Home
News
Sports
Lifestyle
Obituaries
Photo Galleries
Videos
e-Edition
Classifieds
Special Publications
Share This
1 of 15 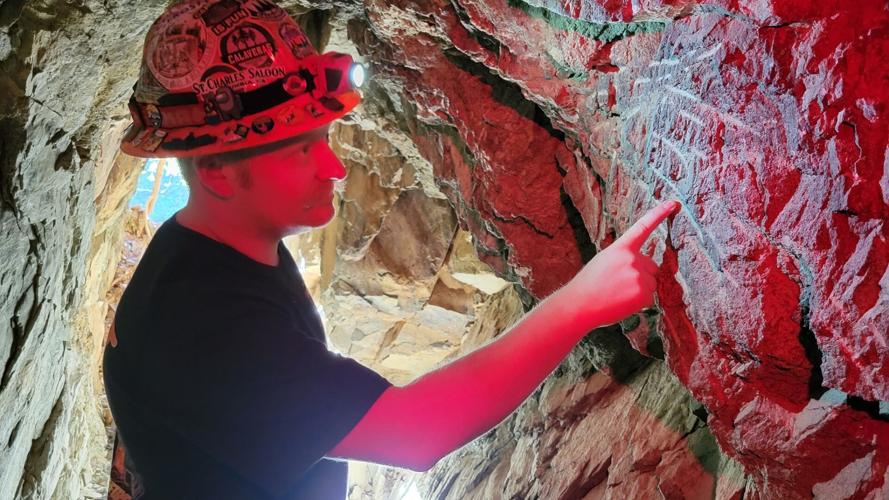 Donald Swanson examines evidence of mining on a recent expedition in the Mother Lode. 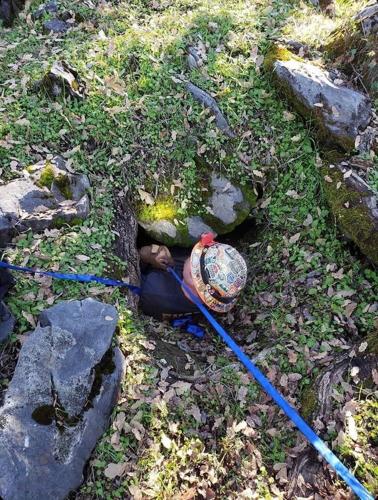 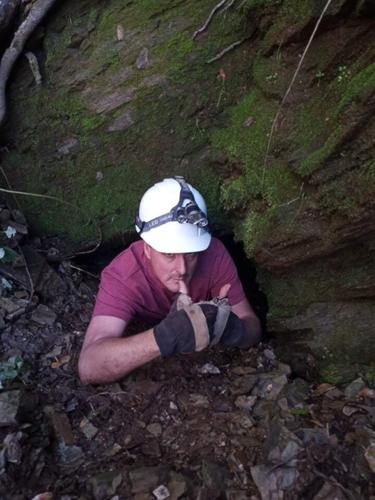 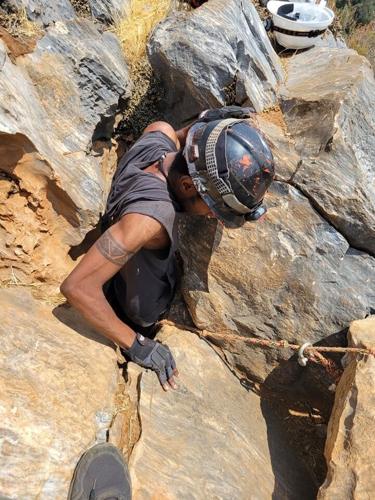 Eli Mansfield eases himself into a crevice in the earth's surface to get down inside a cave or mine opening. 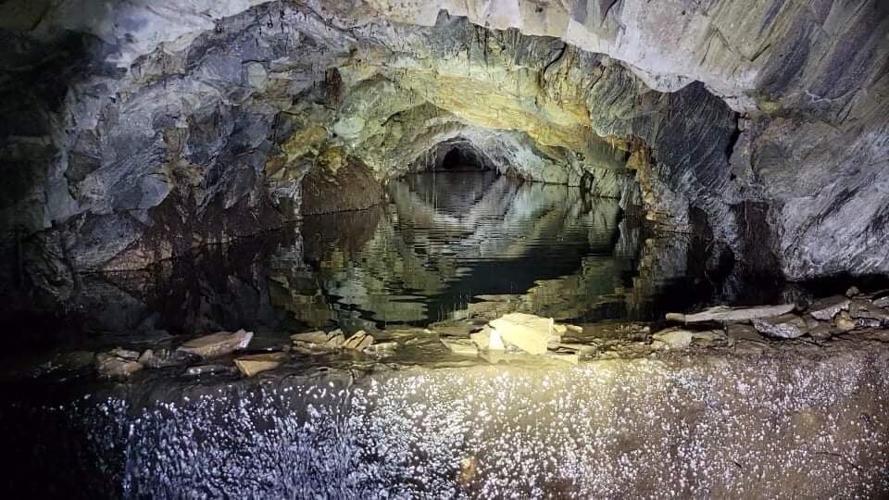 A subterranean body of water in Tuolumne County. 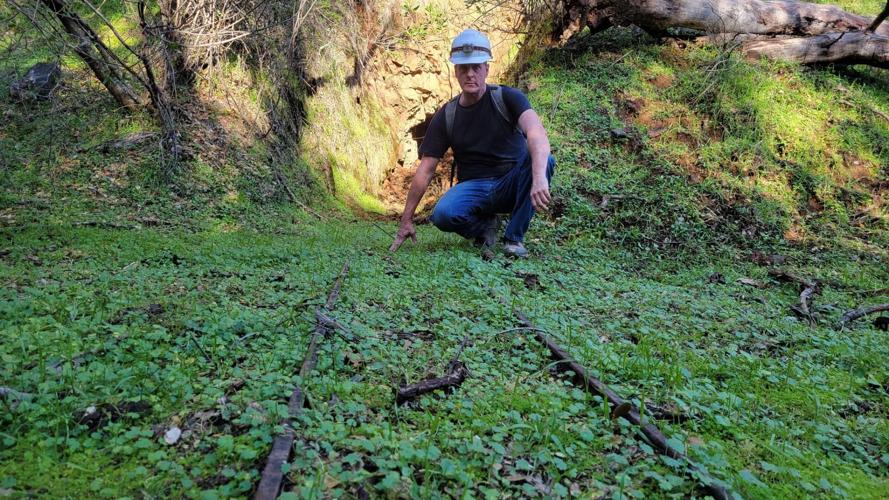 On a caving expedition in the Mother Lode in August. 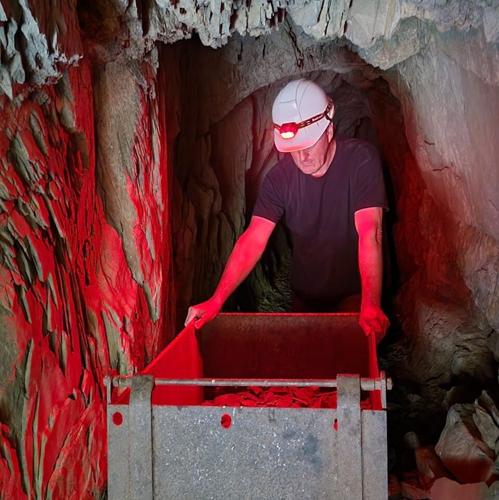 Max Wheeler on a recent subterranean exploration in the Mother Lode. 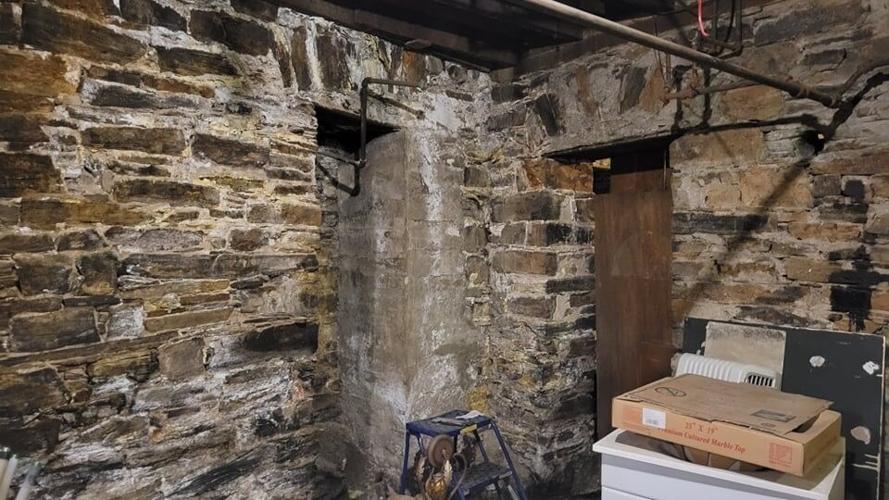 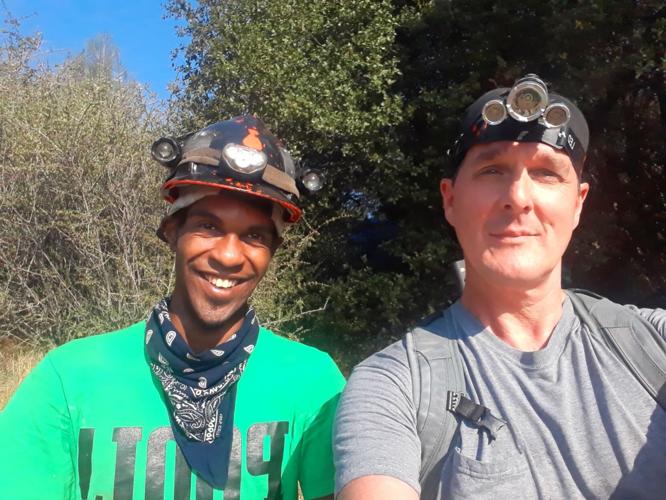 Eli Mansfield and Max Wheeler above ground on a recent exploration in the Mother Lode. 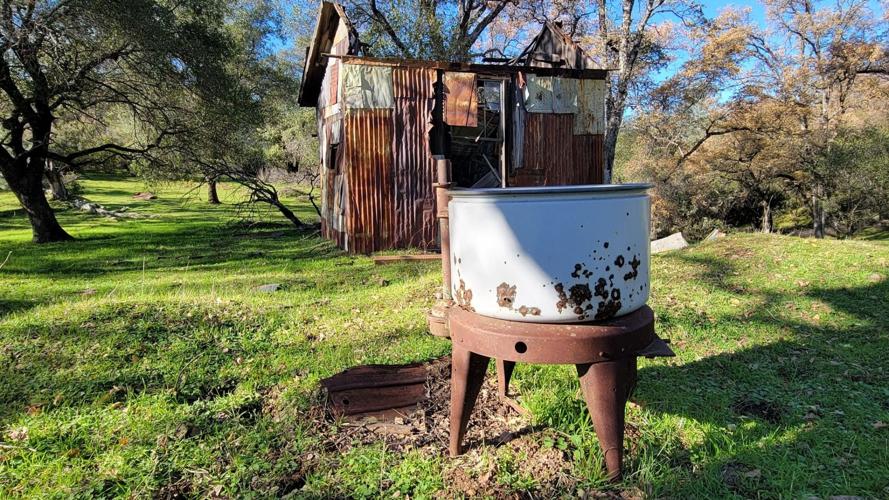 An aging structure composed of scrap metal on a recent exploration in the Mother Lode. 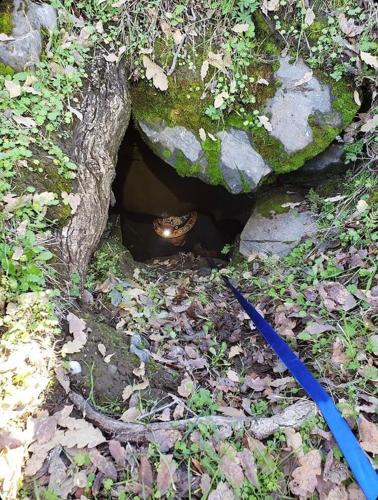 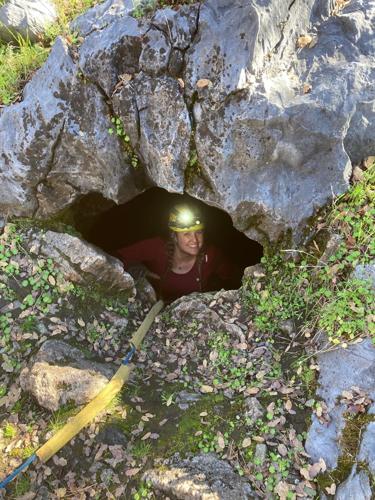 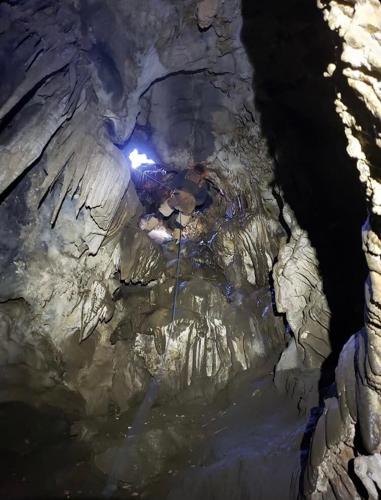 An explorer inside a cave in early January. 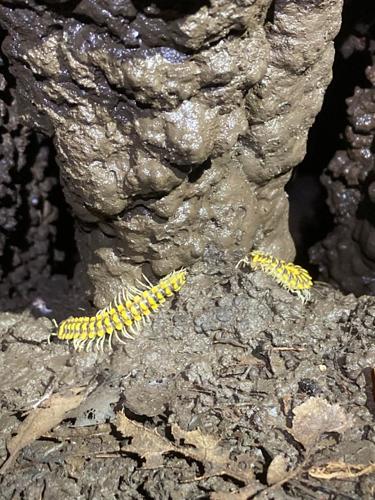 Cave-dwelling centipedes or millipedes in a cave in early January. 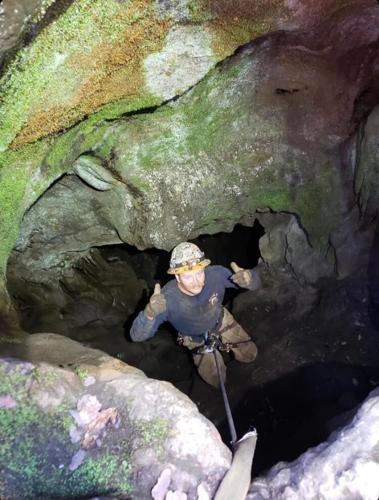 Don Swanson in a cave in early January.
1 of 15

Donald Swanson examines evidence of mining on a recent expedition in the Mother Lode.

Eli Mansfield eases himself into a crevice in the earth's surface to get down inside a cave or mine opening.

A subterranean body of water in Tuolumne County.

On a caving expedition in the Mother Lode in August.

Max Wheeler on a recent subterranean exploration in the Mother Lode.

Eli Mansfield and Max Wheeler above ground on a recent exploration in the Mother Lode.

An aging structure composed of scrap metal on a recent exploration in the Mother Lode.

An explorer inside a cave in early January.

Cave-dwelling centipedes or millipedes in a cave in early January.

Don Swanson in a cave in early January.

Their exploits and discoveries have gained traction with a sizable audience online thanks to their social media pages, Down to Earth Exploring and Gold Country Adventure and Exploration, in addition to their YouTube channels with the same names.

“It’s pretty exciting to get some attention,” Wheeler said in an interview Friday. “We didn’t expect it. We hope people will be excited by what we show, in photos and videos, as excited as we are. We’re not looking to lead tours or anything like that. We’re humble about it. It isn’t about us. We’re just cavers.”

They have gone down into some of the underground storm drains and other passageways beneath the surface streets and sidewalks of downtown Sonora. Some of their discoveries are related to the history of mining tunnels under Washington Street, and stories of secret below-ground corridors for Gold Rush era burlesque dancers and prostitutes.

Recent expeditions have included an underground pond near Table Mountain outside Jamestown and a high-ceilinged cavern with colorful dark-dwelling insects that have scores of tiny legs.

“Some people have offered us money to reveal locations,” Wheeler said. “We won’t do that. We’re not in it for monetary gain, and we respect the locations being undisclosed, for public safety and to prevent vandalism.”

Wheeler, who grew up and finished high school in the Bay Area, remembers building underground forts with his friends, then seven years ago exploring an underground space by accident.

One of Wheeler’s favorite recent explorations is documented in his video “Endless Tunnels and Ore Cart Tracks” on his YouTube channel.

“We never found the end to it,” he said. “Apparently since it is the top level there are many more levels below it.”

Swanson, 27, is a U.S. Navy veteran, firefighter at Mi-Wuk Sugar Pine Fire Protection District, and works as a guide at Moaning Caverns Adventure Park near Vallecito in Calaveras County. Born and raised in Tuolumne County, he said he’s been interested in exploring underground spaces “since I was little.”

Swanson first reached out to Wheeler after seeing his video “Lava Mines Tuolumne County Table Mountain” that he posted in October 2020. Since then, they’ve been meeting up regularly to explore, often on Wednesdays, a day off they share.

The pair are also now often joined on their expeditions by Eli Mansfield, 32, of Ponderosa Hills, whom Wheeler says is agile and fearless and able to get into smaller openings in the earth’s surface.

“He’s not claustrophobic,” Wheeler said. “We send him into the tight spaces sometimes.”

Mansfield does yard work and other jobs to make ends meet. He got interested in exploring mines while hiking. When he was out walking with Wheeler, they came across a few mine openings and decided to go inside.

“I’ll tell you they are beautiful,” Mansfield said. “I can't get enough of the experiences inside these places. I'm a big fan of history, and our county has a lot of it. I didn’t really have much experience before with caves and mines. I've learned so much from others. I was introduced to Donald going caving one day. Since then we have gone on many adventures, and we plan on exploring many more.”

Whether it’s caves and naturally formed spaces underground, or man-made mines and mine shafts and other man-made underground structures, Swanson said they practice safety first “because both caves and mines can be home to many hazards.”

When hazards are numerous, common sense is invaluable, and good personal judgment can be the deciding factor between life and death, Swanson said.

“Typically, abandoned mines are much more dangerous than natural caverns,” he said. “Mines can be roughly 150 years old and sometimes less, while caves can be millions of years old easily.”

Swanson and Wheeler said documenting abandoned and isolated underground sites has become “quite the hobby” since they met. They eventually hope to consolidate all their findings into a Gold Country encyclopedia.

They don’t publish names or locations of their favorite spots because they’ve seen what’s happened to the caverns at Natural Bridges on Coyote Creek, and they blame social media postings for the crowds, trash, and waste that appear at popular, sensitive sites.

“Gold Country Adventure and Exploration is all about the documentation of these places before they are lost and/or forgotten,” Swanson said. “Max and I met through social media messaging when I was looking for like-minded people on YouTube.”

They formed the Facebook group Gold Country Adventure and Exploration with a handful of other people a year-and-a-half ago, and it now has more than 14,000 members. Swanson credits Billie Lyons, formerly with the Tuolumne County Historical Society, for providing important historical facts about areas the explorers have documented.

Wheeler tried to sum up where he and his friends are coming from when he said, “We are in this for the history and the mystery, meaning we are always learning.”

Local historians have uncovered some documented evidence of what lies under the streets of downtown Sonora, and elsewhere in Tuolumne and Calaveras counties. But a great deal of local legend is handed-down hearsay. That’s where eyewitnesses like Swanson, Wheeler and Mansfield are slowly helping to unravel mysteries in local Mother Lode history.

Sharon Marovich, a longtime journalist, historian, and current chair of the Tuolumne Heritage Committee, knows stories of a maze of underground spaces in downtown Sonora, under streets including Linoberg and Stewart, and an old storm drain from Barretta down toward the Sonora Opera Hall, and she remembers part of a drainage tunnel collapsed in the Bank of America parking lot during the notorious hail storm flood of March 2019.

Marovich also recalls the old Bonanza Mine that used to be along School Street between Washington and Snell, and that one of the tunnels was said to extend as far as under the historic county courthouse on Yaney Avenue. There’s also a story of a tunnel near or connected to the old Bradford/Rosasco House at Norlin and Dodge streets, Marovich said.

Jerry Fuccillo, the city’s former longtime engineer, came across a 1919 map showing storm drains under Washington Street that was created by the city engineer back then, C.W. Terry. Fuccillo had the map framed and gave it to the City of Sonora in 1988, said Pat Perry, the city’s historian. It was still hanging in a hallway at city hall this week.

Andy Mattos, with the Carlo M. De Ferrari Archive behind Tuolumne County Library on Greenley Road, said documented information about what’s under the streets of Sonora is limited, in part because most mine maps or maps showing subterranean mine shafts and passageways would have been proprietary. Mine owners and mining companies did not want their valuable information out in the public domain, Mattos explained.

De Ferrari wrote that, in 1853, “considerable wealth remained there either under Washington Street or at the bottom of a series of large gravel filled holes in the creek, which also contained heavy flowing springs or water that defied attempts to drain them.”

In April 1853, the Sonora common council awarded a 10-year right to John T. Haines and others to run a tunnel for mining purposes under Washington Street, with plans for a passage 12 feet wide, 7.5 feet high, and two car tracks running through it.

Mattos also said he’s heard of a city ordinance passed in Sonora in the 1850s or 1860s intended to stop “ladies of the evening from advertising their wares on the street.”

“There were tunnels underneath Sonora where they would move girls back and forth,” he said. “They could not be on the street. They also moved liquor from the saloons to the brothels underground.”

Wheeler said he recently came across a subterranean passage near a former theater in downtown Sonora, where the story was burlesque dancers used the passage to avoid drunken miners, and behind a wall was a sealed-off room with negligees and vanity mirrors where the dancers prepared for performances.

“That’s what the story is anyway,” Wheeler said, admitting that some mysteries may never be solved.

Sherry Blake, the current coordinator for the Tuolumne County Historical Society’s research center at Bradford and Lower Sunset, said she knows Swanson and she’s heard all about his adventures underground.

Blake’s heard enough that now she wants to learn a whole lot more.

“I understand why they don’t reveal locations,” Blake said Friday in a phone interview, laughing to emphasize her excitement and curiosity. “But it’s frustrating for those of us who want to know.”