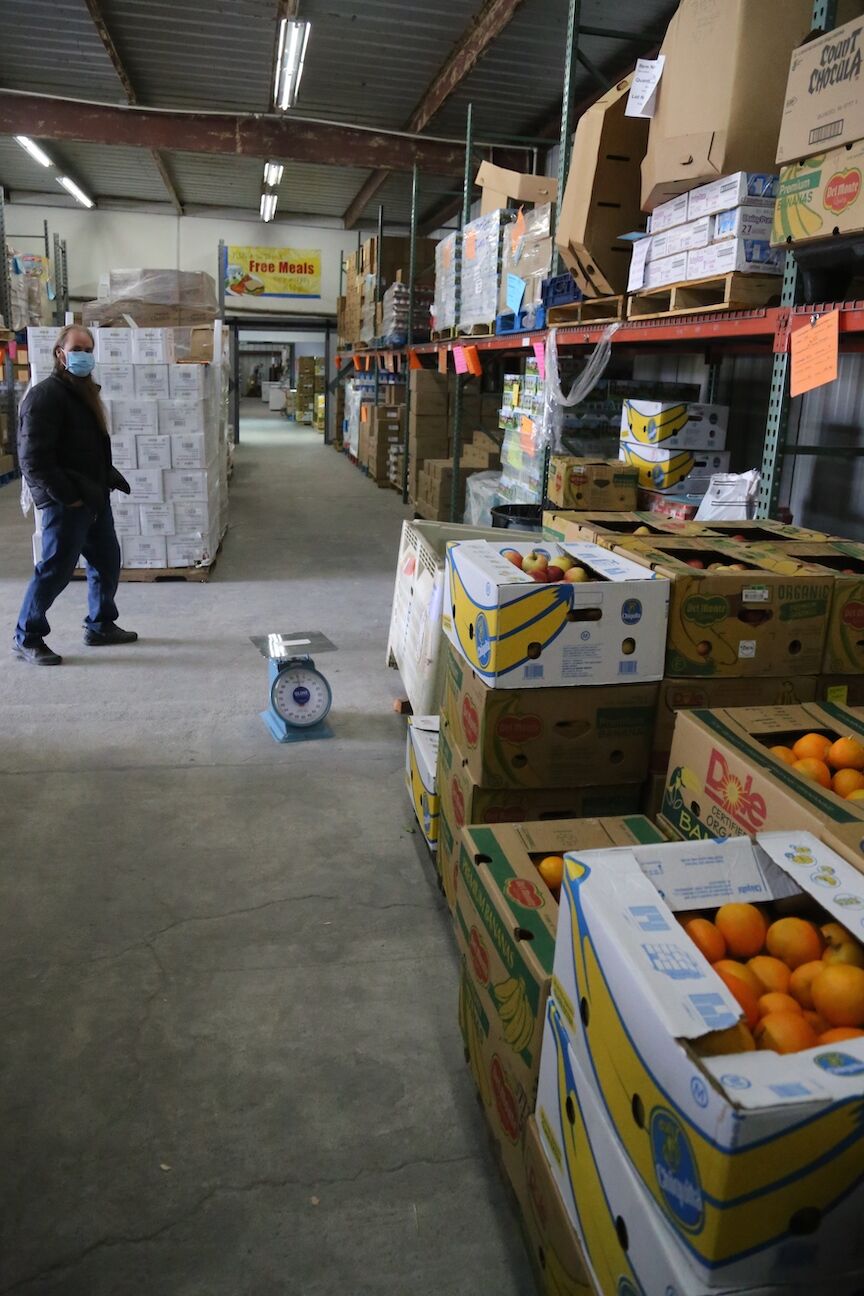 Joe Tobin, the ATCAA food bank director, said this week a state change in federal Emergency Food Assistance Program distributors “is a valid concern for ATCAA, because we need to know whether shipments will continue to come pre-ordered and pre-planned, on the dates and times that work for us.” 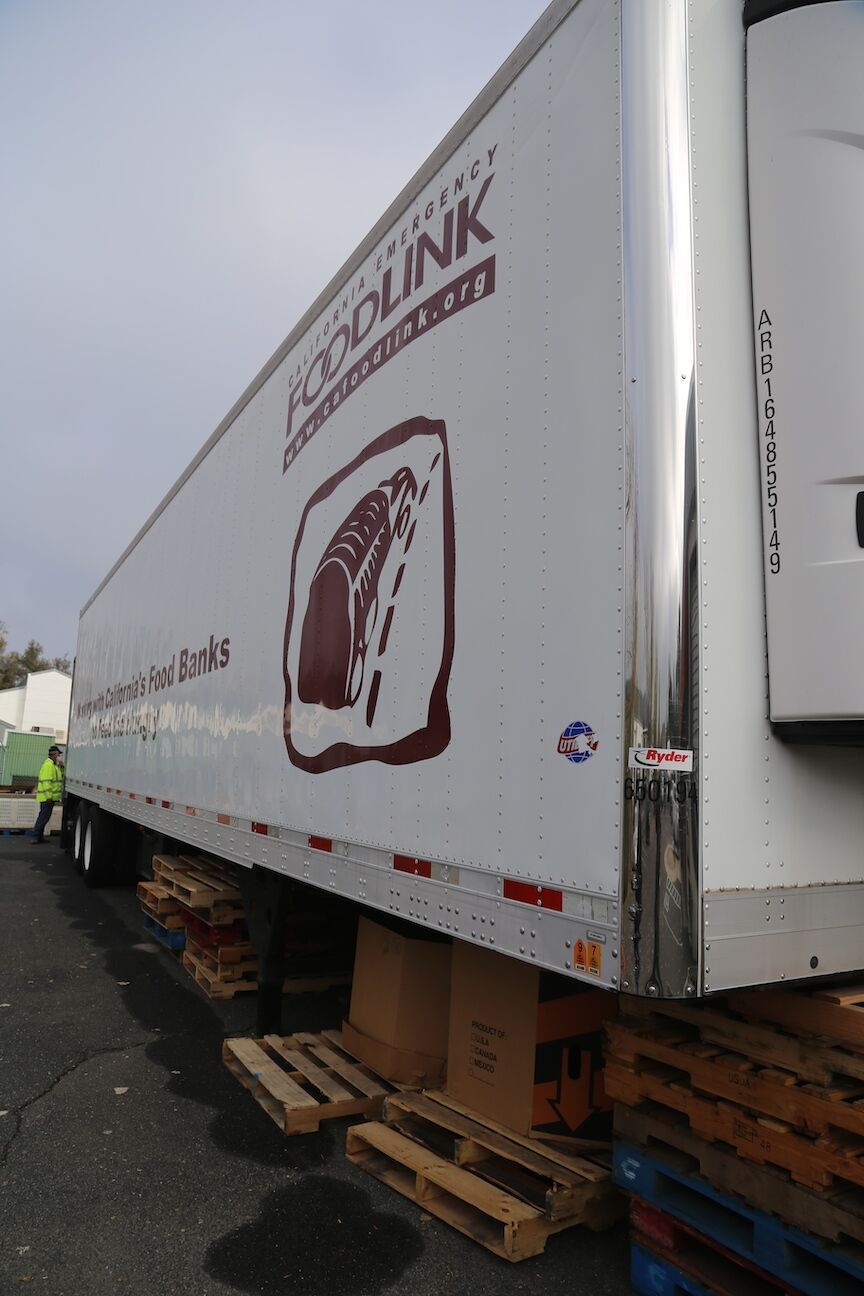 The state Department of Social Services is in the process of switching contractors for distributing federal Emergency Food Assistance Program shipments to foodbanks, including the Amador Tuolumne Community Action Agency food bank in Jamestown that distributes food to more than a thousand families a month, and more than 15,000 individuals a year.

Joe Tobin, the ATCAA food bank director, said this week a state change in federal Emergency Food Assistance Program distributors “is a valid concern for ATCAA, because we need to know whether shipments will continue to come pre-ordered and pre-planned, on the dates and times that work for us.”

The state Department of Social Services is in the process of switching contractors for distributing federal Emergency Food Assistance Program shipments to foodbanks, including the Amador Tuolumne Community Action Agency food bank in Jamestown that distributes food to more than a thousand families a month, and more than 15,000 individuals a year.

The California Department of Social Services is in the process of switching contractors for distributing federal Emergency Food Assistance Program shipments to food banks, including the Amador-Tuolumne Community Action Agency Food Bank in Jamestown that distributes food to more than 1,000 families a month and more than 15,000 individuals a year.

Joe Tobin, the ATCAA Food Bank director, said the change in distributors “is a valid concern for ATCAA, because we need to know whether shipments will continue to come pre-ordered and pre-planned, on the dates and times that work for us.”

The existing contractor is California Emergency Foodlink of Sacramento, which first partnered with state social services in 1984 to distribute food in Northern and Central California before becoming a stand-alone nonprofit organization in 1992.

“We’ve worked with Foodlink for many years, and they’ve been an amazing amount of help to us,” said Tobin, who was food bank coordinator with Resource Connection Food Bank in San Andreas before he became director for the ATCAA Food Bank in Jamestown in July 2019.

“The staff and drivers help us out. They know our routes and times for deliveries,” Tobin said last week. “They’ve been very gracious to us, for our organization. When we needed on-site storage, they loaned us one of their refrigerated trailers. They paid the lease, at least $2,000 a month, and all we have to provide is fuel to keep the fridge running. We’re using that reefer trailer right now, to store perishables that we don't have room for in the warehouse refrigerators. It’s helping keep food for families this Christmas.”

According to Foodlink chairman and CEO John Healey, changes in distribution of The Emergency Food Assistance Program “could leave food banks without the quantity or quality of food they need to serve families starting in January, as many face continued hardships due to the COVID-19 pandemic.”

In addition, food bank distributors in two northeastern California counties have not received TEFAP shipments since October, when CalFoods Logistics was supposed to begin distributing to that part of the state, Healey said.

“We are concerned that without concerted support from our state’s leaders, already vulnerable families could be placed at even greater risk in just a matter of weeks,” Healey told McClintock.

Foodlink is a longtime partner of the state, helping deliver emergency food to families and households in need, Healey said in his Dec. 15 letter. The nonprofit has made investments to help the state administer TEFAP food distribution and combat the state’s hunger problem, including spending on resilient storage facilities, subsidizing the TEFAP program during periods of state budget shortfalls, and helping the state respond to 15 declared natural disasters since 1994, Healey said.

“After 30 years in operation, we recently learned that CDSS has awarded a brand-new company a no-bid contract to provide and operate California’s TEFAP program,” Healey told McClintock. “This transition will take place on Jan. 1, 2021. The department’s reported decision is marked by numerous irregularities that are wholly inconsistent with California public contracting requirements. Furthermore, we have serious concerns that this decision will lead to a shortage of food just as families are grappling with the economic fallout of a third wave of COVID-19 cases. In Lassen and Modoc counties, where the new distribution partner was brought in this fall, food banks have not received TEFAP food since Oct. 1. Instead, families are receiving a minimal amount of food in boxes that were ordered with emergency funds related to the ongoing pandemic.”

Healey told McClintock he and others with Foodlink are concerned that what is allegedly happening in Lassen and Modoc counties could happen to food banks in McClintock’s district, including the ATCAA Food Bank in Jamestown, and the Resource Connection Food Bank in San Andreas.

“It is unconscionable that the state would take these actions during the worst pandemic in 100 years, which has created enormous demand for food banks and distribution sites serving hungry families,” Healey told McClintock.

Donna Hinkle, a representative for a Milford food bank distribution point in Lassen County, confirmed Wednesday that Lassen and Modoc counties have not received TEFAP food deliveries since Oct. 1.

“We received TEFAP food in September,” Hinkle said in a phone interview, speaking from Milford. “We’ve received no TEFAP food since late September.”

Lassen and Modoc counties border each other and are similar in their rural character, with sparsely-populated ranching communities and small towns, Hinkle said. She said she attended a meeting with state Department of Social Services representatives at Lassen Community College in Susanville in early October. In attendance were people with food bank distribution locations in Lassen and Modoc counties.

“There were representatives from all the distribution points in both counties,” Hinkle said. “The state people talked about the new distributor’s contract and they promised we’d be getting our TEFAP food deliveries very soon. None of that has come to pass. I can’t get answers from the state Department of Social Services.”

“I want to emphasize the state needs to make up their minds and get their butts in gear,” she said. “They’re the ones holding up this whole thing. They need to get the food to the needy people in these two counties. They haven’t been taking care of these two counties. We’re right out there on the northeast edge of the state, bordering Oregon and Nevada, and we’re very few people. They forget about us like we’re the red-headed stepchild of California.”

Healey asked McClintock to reach out to food banks in his district to ensure they are receiving TEFAP food they are expecting, on time and of the same quality and quantity.

Asked Dec. 17 whether the Mother Lode congressman had received the Dec. 15 letter, McClintock spokeswoman Jennifer Cressy responded, “We have seen the letter. We have contacted the staffs of the state representatives for Tuolumne County, making sure they have seen the letter and urging them to take action.”

Foodlink has a warehouse at the Old Sacramento Army Depot with 12 bays that are each one acre in size, for a total of 522,720 square feet, and an additional separate freezer that is 30,000 square feet. The state’s TEFAP food storage takes up four bays and about 48,000 square feet of freezer space. Foodlink has five trucks and employs four full-time drivers and one part-time driver.

Tobin, the ATCAA food bank director in Jamestown, said last week, “Since the new folks haven't taken over with the deliveries yet, I have no idea how it's going to work out. I have no reason to believe it won’t work out, but like I've said, we've been dealing with Foodlink for years. They know where the deliveries go, and they know our dates and times. We pre-plan this by every single case of food, and we’re talking thousands of cases of food per year. Timing and distribution is key for us, a hundred percent. Sometimes we get perishables we won't be able to store for a week. If they deliver us a shipment of milk a day late, and miss our distribution, that can mean 500 half-gallons of milk go bad and go in the trash. We’re talking about food for hungry families.”

After reviewing some of the concerns raised by Foodlink, Tobin added that the ATCAA Food Bank in Jamestown has continued receiving its shipments as planned through Foodlink “up to this point.”

“I hear this will change to a new distributor as of the 1st of January 2021,” Tobin said. “I cannot speak to shortages others have experienced, as we have not had this happen to us yet. If that is the case, it definitely raises some concern.”

Tobin reiterated he hopes the new distributor continues to deliver goods the ATCAA Food Bank has pre-ordered, on the dates and times that work for food bank staff and the families they serve. Tobin said he has no reason to believe the new distributor will not follow through, “other than from what I've just read has happened to others. I prefer to be optimistic at this time.”

Tobin said he and his staff will definitely miss Foodlink, because the nonprofit has been an amazing partners during Tobin’s tenure with Mother Lode food banks, and “nothing short of overly gracious to us in our times of need, by helping us out with a refrigerated trailer at no cost, multiple times.”