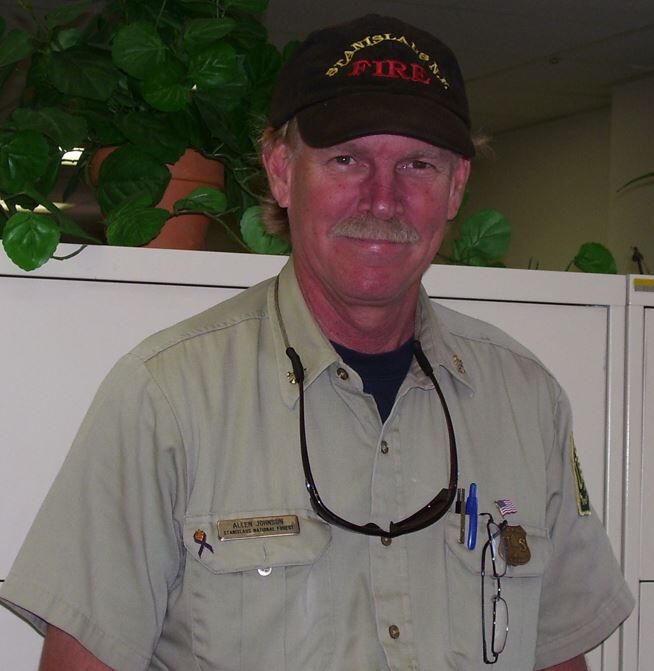 Retired U.S. Forest Service firefighter Allen Wesley Johnson, of Groveland, died at 68 on Aug. 31 of complications from COVID-19 while in the line of duty assisting with the French Fire near Kernville. 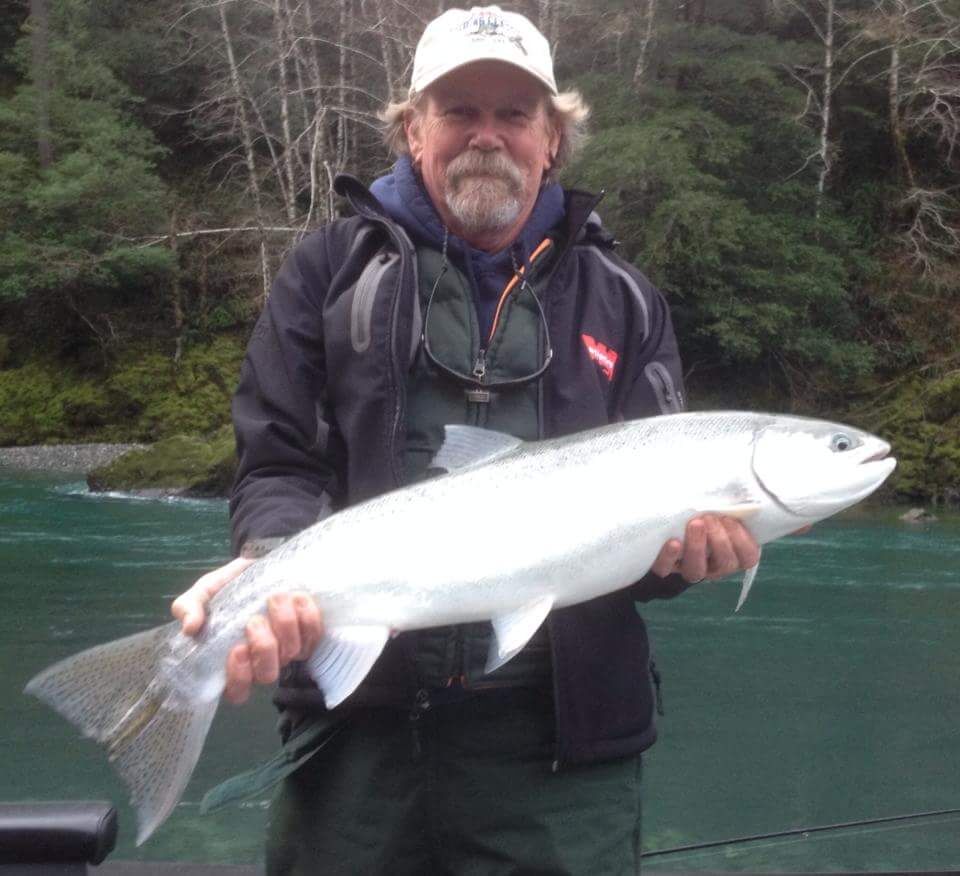 Former colleagues of the late Allen Wesley Johnson said he was an avid fisherman who was always quick to show them photos of his latest catch.

Allen Johnson (standing to the far right) near the Rim of the World outlook on Highway 120 east of Groveland while giving one of his well known "staff rides" of the area burned by the Tuolumne Fire in 2004. 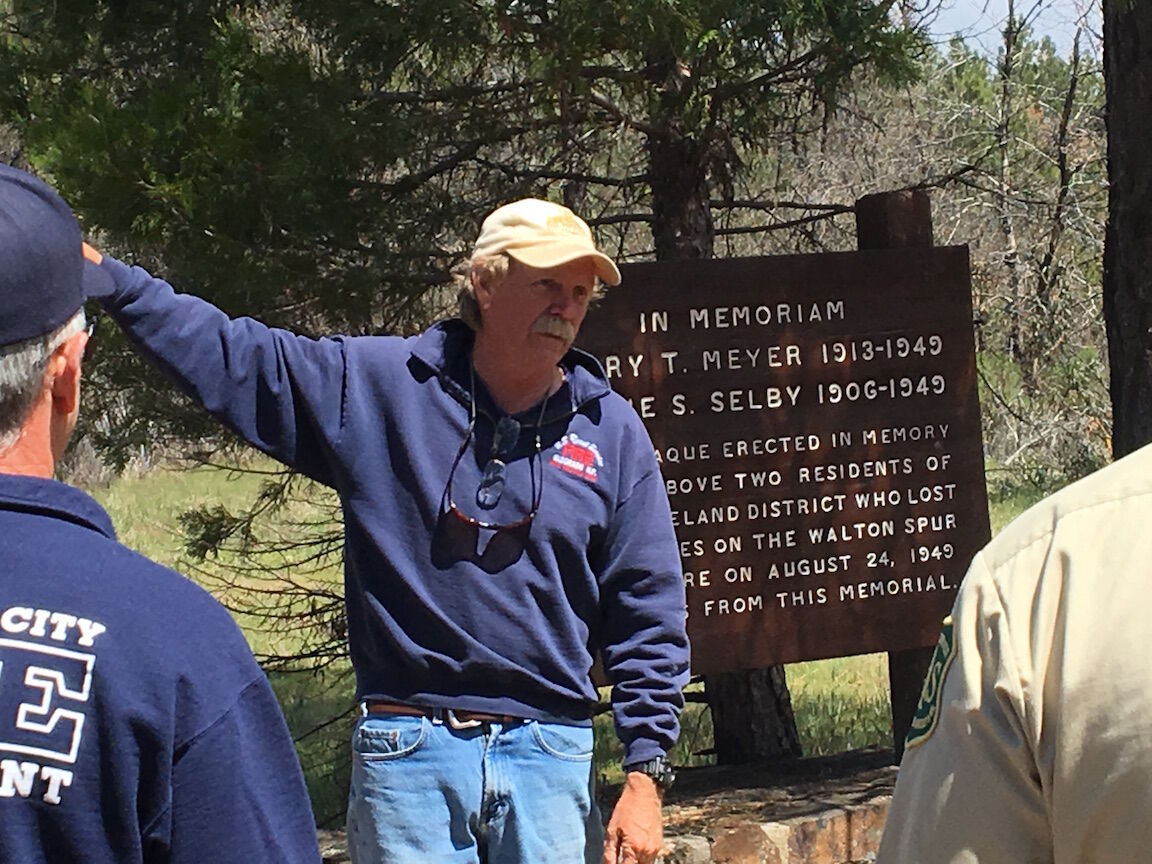 Allen Johnson speaking with seasonal firefighters during one of his "staff rides" to teach them about fire behavior.

Retired U.S. Forest Service firefighter Allen Wesley Johnson, of Groveland, died at 68 on Aug. 31 of complications from COVID-19 while in the line of duty assisting with the French Fire near Kernville.

Former colleagues of the late Allen Wesley Johnson said he was an avid fisherman who was always quick to show them photos of his latest catch.

Allen Johnson (standing to the far right) near the Rim of the World outlook on Highway 120 east of Groveland while giving one of his well known "staff rides" of the area burned by the Tuolumne Fire in 2004.

Allen Johnson speaking with seasonal firefighters during one of his "staff rides" to teach them about fire behavior.

The firefighting community in the Mother Lode and beyond is mourning the loss of Allen Wesley Johnson, a retired U.S. Forest Service firefighter from Groveland who died of COVID-19 complications on Aug. 31, despite being fully vaccinated.

Johnson, who was 68, was hospitalized in Bakersfield at the time of his death, the Forest Service said. His death is considered to have happened in the line of duty because he was helping with the French Fire near Kernville, which he was known to do since retiring in 2010.

“If you lose somebody who’s healthy, strong and working, it’s always a shock,” said Lee Sands, a battalion chief for the Groveland Ranger District in the Stanislaus National Forest who worked with Johnson for many years. “It seems to be the people you’d least expect, in my personal experience with COVID.”

The Forest Service currently does not know when or how Johnson could have caught the deadly virus, the agency said.

Johnson spent nearly four decades working for the Forest Service in California prior to his retirement doing fire suppression and fuels management on the Angeles, Cleveland and Stanislaus national forests.

Sands said he met Johnson in 1999 soon after starting his own career with the Forest Service.

“He was somebody that we all looked up to,” Sands said. “I got to know him and started learning the rules of the job. He was a mentor to me.”

Johnson was not only a good boss to Sands as battalion chief and later division chief of the Groveland Ranger District, but the two also became friends outside of work.

Sands said that Johnson was really open with people who worked under him and would invite them to his longtime home in Groveland, where he enjoyed gardening and cooking meals for colleagues and friends.

“I would go fishing with him every once in a while, and my daughter learned to drive a boat with him,” Sands said. “One thing I’m really going to miss is his voice, getting phone calls from him and seeing him in person and what not. He had a really distinct voice.”

Johnson also was known within the firefighting community for developing “staff rides” to teach seasonal firefighters lessons learned from the death of Cal Fire firefighter Eva Schicke on Sept. 12, 2004, while battling the Tuolumne Fire outside of Groveland.

Barry Rudolph, a retired battalion chief from Cal Fire in Twain Harte, said Johnson was the incident commander for the Tuolumne Fire and was deeply affected by Schicke’s death.

“What happened out of that was a commitment made to the family (of Schicke) to teach fire behavior training to seasonal firefighters, which was really something that had never been done before,” Rudolph said.

Thousands of firefighters from local, state and federal fire agencies participated in the staff rides led by Johnson over the years.

Rudolph said he can’t remember a year in which Johnson did not lead the staff ride, adding that Johnson’s generosity with his time to impart his firsthand experience with the Tuolumne Fire was a “real gift to the firefighting community.”

“That’s a huge loss to lose a person like that, who was intimately involved with the incident and can share all kinds of perspectives and feedback and things that are not gathered in reports,” Rudolph said.

Robert Laeng, who retired as division chief of the Stanislaus National Forest’s Mi-Wok Ranger District in 2016, said he viewed Johnson as both a friend and mentor.

Laeng, who on Friday was in the Shasta-Trinity National Forest helping with the River Complex Fire, said he and Johnson were each promoted to division chiefs of their respective ranger districts within the same month in 2000.

“He was outgoing in many of our conversations at the workplace that carried that into our social lives,” Laeng said. “We talked about our travels and compared experiences around the country and different parts of the world. We both had an interest in gardening and shared seeds back and forth.”

Johnson was also known as an avid fisherman, whom Rudolph said would always first show off photos of his catch of the day before any meeting they attended.

The Forest Service put out a news release on Friday announcing Johnson’s death to COVID-19, which also described longtime Groveland resident’s contributions to the community following his retirement as coordinator of the Southwest Interface Team, or SWIFT.

Jim Junette, the Groveland district ranger for the Stanislaus National Forest, also said Johnson was a “perfect example of a fantastic human being” and a natural leader in the world of fire suppression and fuels management.

“The agency was a better place because of him, and those in the community will continue to benefit from his tireless efforts to protect our communities,” Junette said in the release. “Godspeed brother.”

Anna Payne, a Forest Service spokeswoman, said it was unknown if the White House was aware of the longtime federal firefighter’s death to COVID-19, but both the Secretary of Agriculture Tom Vilsack and Forest Service Chief Randy Moore had been notified.

Payne said it was not known when Johnson was fully vaccinated. She also said his family was unavailable to comment on Friday.

Johnson’s memorial is scheduled for Sept. 26, with more details to follow. An “Allen Johnson Memorial” Facebook page has also been created for people to share memories, condolences and pictures.

His obituary stated that he is survived by his wife of 46 years, Martha Johnson, and brothers Steve and Raymond Johnson, in addition to his in-laws, nephews, nieces, and six exchange students.

Letters of condolence for the family can be sent to Martha Johnson, in care of: Stanislaus National Forest Supervisor’s Office at 19777 Greenley Road, Sonora, CA, 95370. Flowers for Allen Johnson’s Sept. 26 can also be sent to the supervisor’s office.

Another way the Forest Service said people can honor Allen Johnson’s legacy is through contributing to a GoFundMe page for his memorial at https://gofund.me/8b6002a3.

Items needed by Sept. 23 for the memorial include ice, bottled water, masks, a photographer, videographer, and finger food to offer family and Honor Guard. To help, call the Stanislaus National Forest Supervisor’s Office at (209) 288-6279.