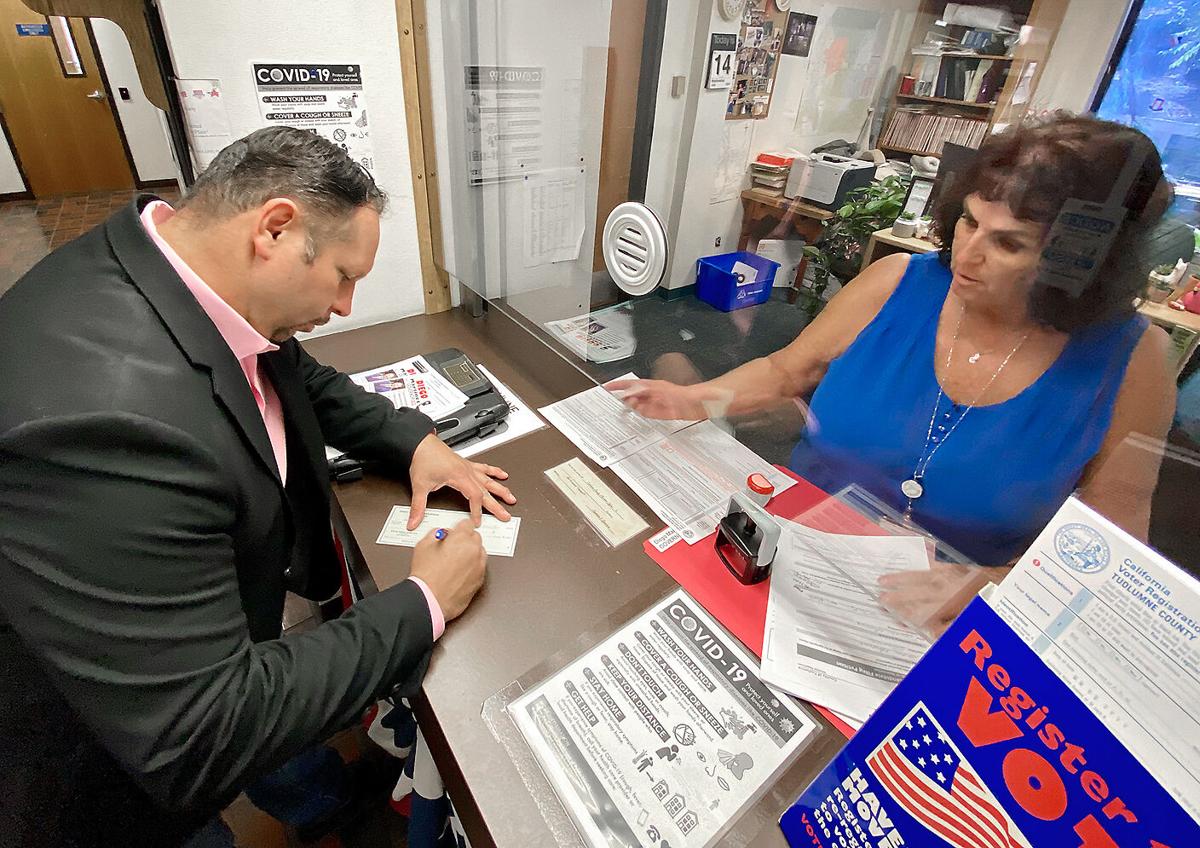 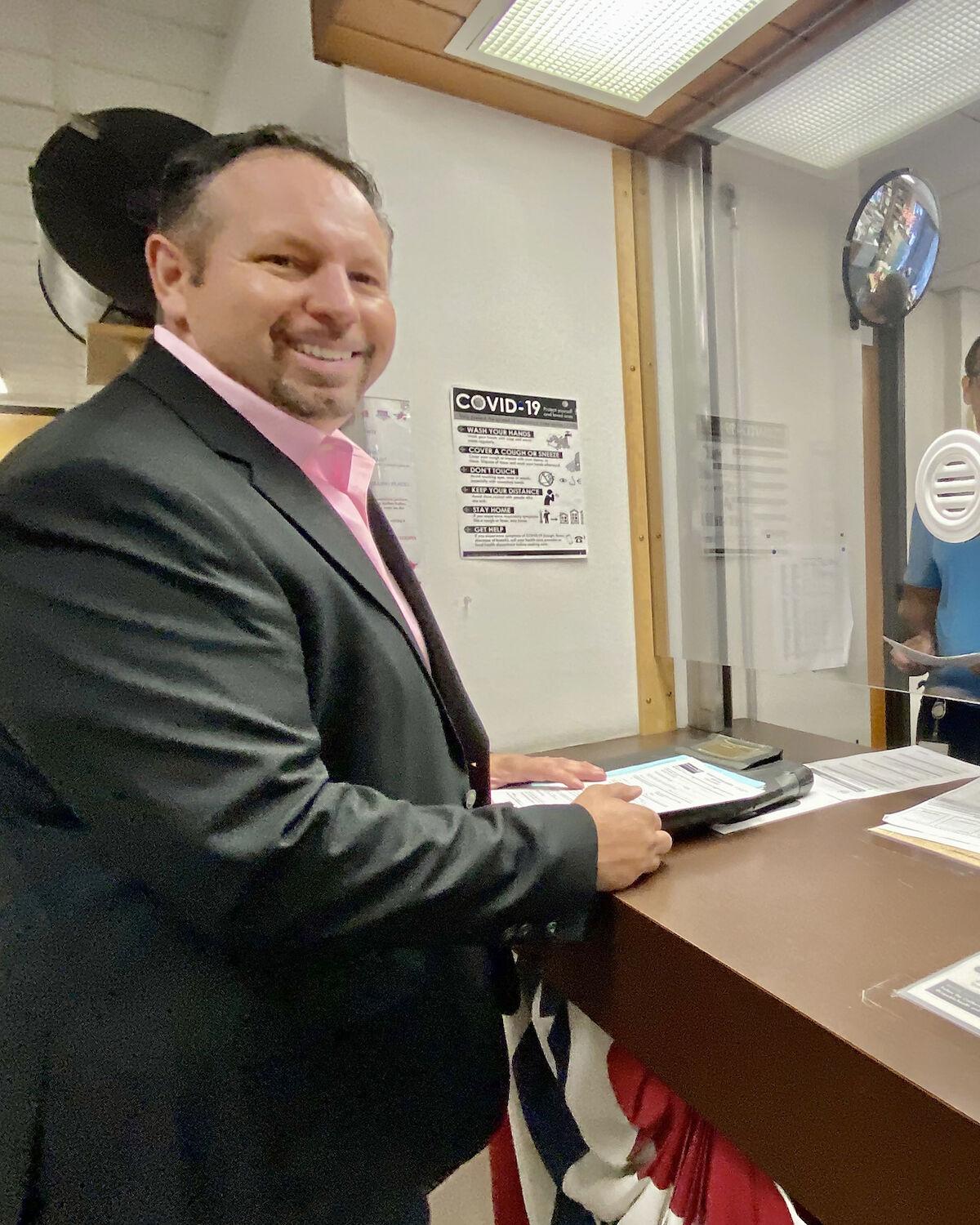 Diego Martinez, 45, of Sonora, is one of 41 candidates whose name will officially appear on the ballot in the Sept. 14 recall election of Gov. Gavin Newsom.

Diego Martinez, 45, of Sonora, is one of 41 candidates whose name will officially appear on the ballot in the Sept. 14 recall election of Gov. Gavin Newsom.

A Republican bail bondsman from Sonora has launched a longshot bid to unseat Gov. Gavin Newsom in the Sept. 14 recall election on a platform that he said invokes his immigrant roots and blue-collar ideals.

"We the people of California hired these people to do a job, yet they are forgetting that they work for us," said Diego Martinez, of Sonora. "We have got to get back to that."

Martinez, 45, the owner of Diego Martinez Bail Bonds in San Andreas, has a tough road ahead. He joins a crowded field — there are 76 potential candidates and counting from all political stripes as of Wednesday, according to Ballotpedia — and has so far been dwarfed in fundraising.

Even in his own party, Martinez is running in the shadow of prolific and recognizable names in California Republican gubernatorial politics: John Cox, who won the 2018 Republication nomination and lost to Newsom; Kevin Faulconer, former mayor of San Diego; and Caitlyn Jenner, a former Olympian and reality TV star who has started her own unexpected and first-time political campaign.

Martinez has raised $15,540 from 13 contributions, according to public records via the California Secretary of State’s Office, with the most recent being a $13,000 donation on July 1 from his own bail bonds company.

Still, Martinez sees himself as a David facing off against Goliaths. He said because he is an immigrant and bilingual, he can attract blue-collar workers and libertarians that the big-money names cannot.

"I don't flatter,” he said. “I'm about justice, and I'm about being correct in what we do for the California people. I am the underdog, and I'm reaching where they're not."

Martinez immigrated to the United States at 6 years old with his mother, two sisters and two brothers from the small town of Solymar in Uruguay. He grew up in Stockton, moved to Tuolumne County during his freshman year of high school, and graduated from Cassina High School.

His career path took him through the restaurant industry, the timber industry and then in the auto industry for 17 years where he worked up from a salesman to a general manager turning dealerships to profitability, he said.

He characterized his success as the embodiment of the "American Dream," the idea that anyone in America can earn success and upward mobility as a result of hard work.

"Who would have ever thought an immigrant who came to California when he was 6 years old would be running for governor for California in 2021?" Martinez asked.

Since declaring in 2020, Martinez’s campaign has been largely self-funded, taking him by car to counties and cities like Orange, San Diego, Humboldt, Mendocino, San Jose and Los Angeles. He said he's been featured on Fresno radio programs and interviewed by Univision — the Latino market looms large in his strategy to secure a plurality of the electorate — and hosts a weekly show on his social media pages.

Now, with his papers to appear on the ballot filed, Martinez is ramping up fundraising with a goal of at least $5 million "to be competitive" and hopes to spread his message to television.

And though Martinez believes his identity sets him apart from the other competitors, his platform is not distinct from traditional Republican Party ideology in California politics.

Martinez described the state as "anti-business" with ungainly, high taxes on nascent small businesses. He is against teaching sexuality and critical race theory in schools, and though he said religion should be kept out of classrooms and the government, he asserted that the term "under God" in the Pledge of Allegiance should be protected. He said a decline in agricultural production, fueled by pro-environmental water policy, diminished the state's influence and left it susceptible to economic infiltration from overseas, exporting-powerhouse economies like China. He said a failure to deregulate the lumber industry has fueled a wildfire crisis and corrupted agencies involved in forest management. He said crime, chaos and riots have run rampant because politicians were "weak" on Black Lives Matter protests and gave financial incentives to inmates in the state penal system.

On Newsom specifically, Martinez believes a successful recall is imminent because of a dissatisfaction that he characterized as transcending the political boundaries between Democrat and Republican.

"Do as I say, not as I do, it backfired on him,” Martinez said of the first-term Democrat. “I believe he tried to buy votes and people aren't buying it anymore. Gavin Newsom has flat out failed the California people."

Recall proponents earned 1,719,943 valid signatures (more than the 1,495,970 necessary to trigger a recall election) by the March 17 filing deadline.

Opponents to the recall, including the Democratic Party-funded political action committee "Stop the Republican Recall of Governor Gavin Newsom," have characterized it as driven by a "partisan, Republican coalition of national Republicans, anti-vaxxers, QAnon conspiracy theorists, anti-immigrant activists and Trump supporters" seeking to overturn the 2018 gubernatorial election, which Newsom won with nearly 62% of the vote to Cox’s 38%.

Much of the furor against Newsom recently was fueled by his COVID-19 policies which included multiple statewide shutdowns and the political upheaval of the last two years in the election of President Joe Biden and Black Lives Matter protests last summer over the murder of unarmed black man George Floyd by Minneaoplis Police Officer Derek Chauvin.

Martinez asserted that Newsom shut down California too early and reopened it far too late. He was critical of the economic policies that largely shuttered small businesses to in-person sales, but kept big-box companies like Wal-Mart in operation with mask mandates.

Martinez, who is unvaccinated, said he's against any form of pressure for the public to receive vaccinations, though he believes it should be free for those who seek it out voluntarily.

Martinez voted for Donald Trump in the presidential elections of 2016 and 2020, though he said his candidacy is unaffiliated with the former GOP president’s national policy because he is strictly California-focused.

"I see California first, not what's going around the world right now, because California needs help," he said.

On Wednesday, Martinez filed a declaration of candidacy and nomination papers with 42 signatures in the Tuolumne County Elections Office.

At least 65 signatures are required to get on the ballot and can be filed in any county throughout the state. Martinez said he plans to submit another 30 signatures in Calaveras County and 25 in Lake County in order to meet the threshold to be confirmed for the ballot by the filing deadline Friday.

Martinez also paid a filing fee — noted online to be $4,194.94 — with five years of tax returns. A candidate could have the fee waived if they filed at least 7,000 signatures.

Debi Bautista, registrar of voters for Tuolumne County, said the election would cost the county an estimated $206,750, mostly due to staffing voting centers for a required period before the election over the Labor Day weekend.

The money comes out of the county’s General Fund, which pays for law enforcement, recreation, libraries, and most other core public services. It’s expected to be reimbursed by the state, though Bautista does not know when or how that will occur.

Bautista said the county was required to keep at least one vote center open 11 days before election day. She plans for the county Elections Office in Sonora to be open Sept. 4-6; the Tuolumne Memorial Hall Sept. 7-10; and Twain Harte Bible Church, Groveland Library, Tuolumne Memorial Hall and likely the Jamestown Community Hall (the site had to be moved from Wilson Realty for this election and a new site is pending) Sept. 11-14.

The Elections Office in the County Administration Center at 2 S. Green St. in Sonora will also be open for early voting from Aug. 16 through Election Day during business hours on Monday through Friday.

The early voting coincides with the expected release of ballots by mail to all Tuolumne County registered voters the week of Aug. 16. All voters will receive mail-in ballots, but they can also vote in-person at the vote centers.

Filled out ballots can also be taken to drop-off boxes at the Mi-Wuk Village branch library, in Twain Harte by the Twain Harte Pharmacy, the Willow Springs Clubhouse in Soulsbyville, The Junction shopping center in East Sonora, the Tuolumne County Library in Sonora, Columbia Elementary, the Groveland branch library and at Rocca Park in Jamestown.

Bautista said she does not know of any other local candidates at this time, though they have until the candidate submission deadline Friday.

Bautista was working in the county accounting office during the successful recall of California Democratic Governor Gray Davis by movie-star Arnold Schwarzenegger and recalled celebrity candidates like Roseanne Barr, Gary Coleman and even a stripper running for the office.

"There seemed to be more people in it for the fun of it than seriously thinking about running for the government,” she said. “I don't see that as much here.”

That election had 70% turnout out of 31,000 registered voters in the county at the time. The most recent election on the failed Measure V fire tax had 42% turnout, while the 2020 presidential election had a record-setting 88% turnout.

Now, there are almost 36,000 registered voters in the county. Bautista estimated turnout for the Sept. 14 recall election would likely be in the approximately 70%.

"For one, this county for its voters had a really high turnout of people who signed the petition to recall him," Bautista said, “and this community is usually engaged.”