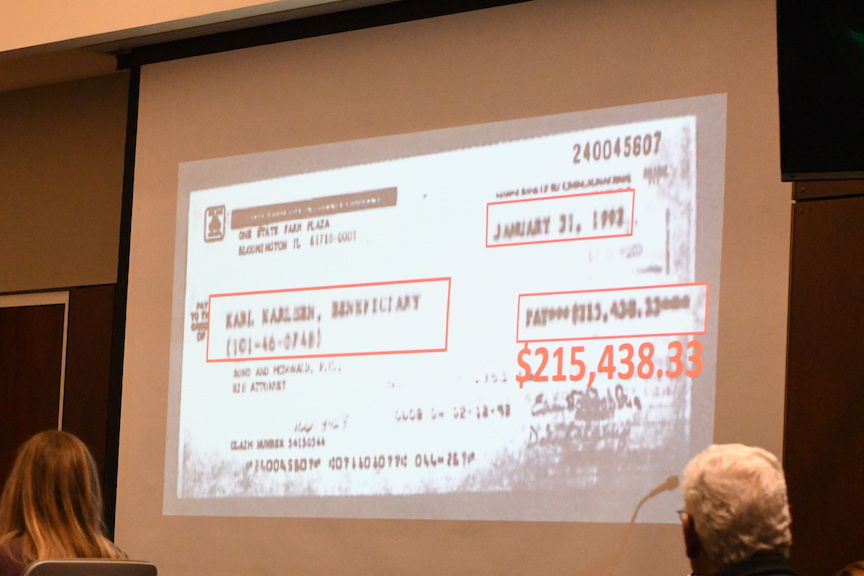 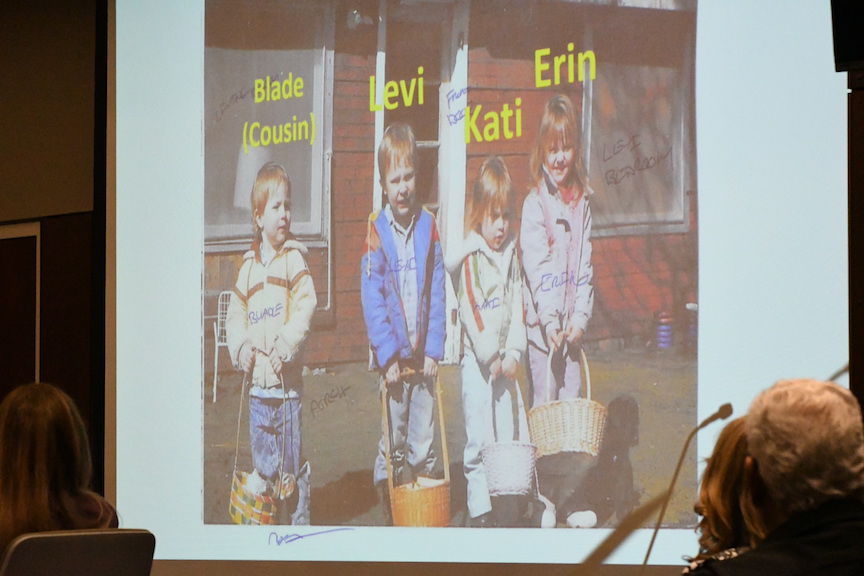 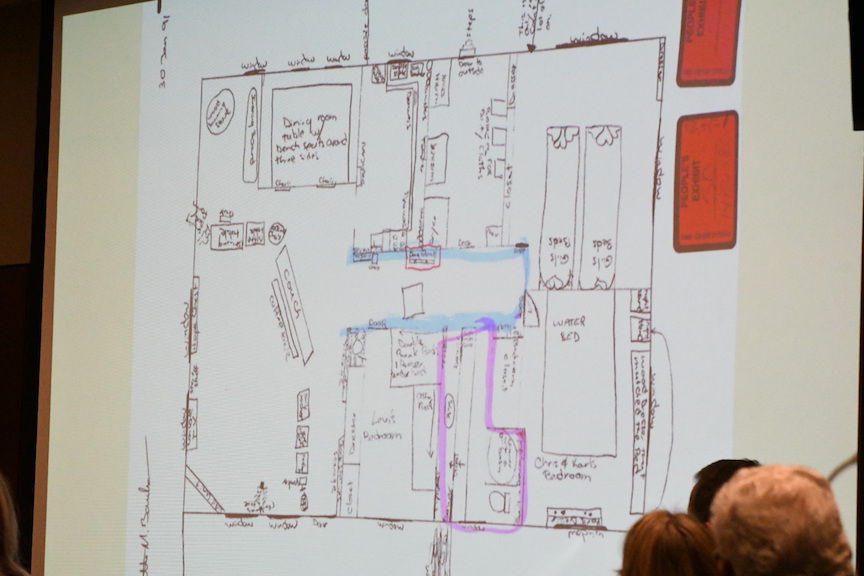 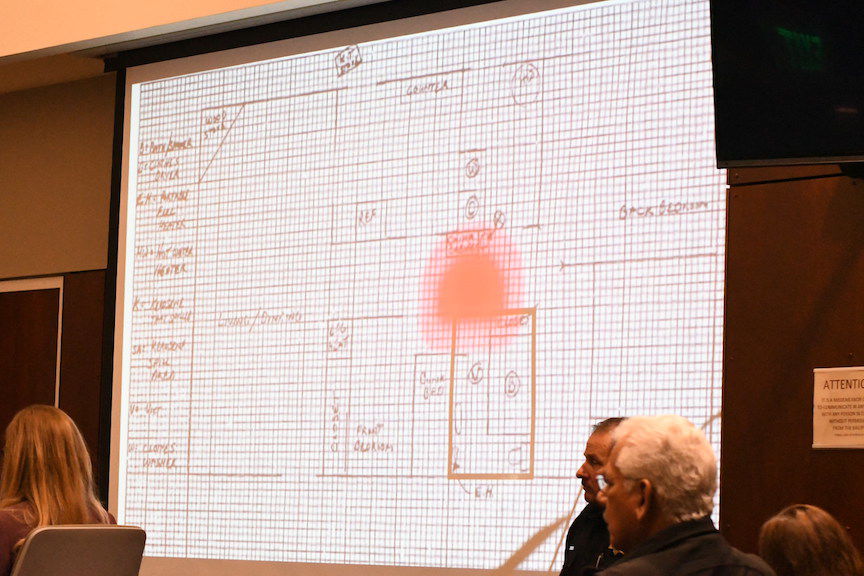 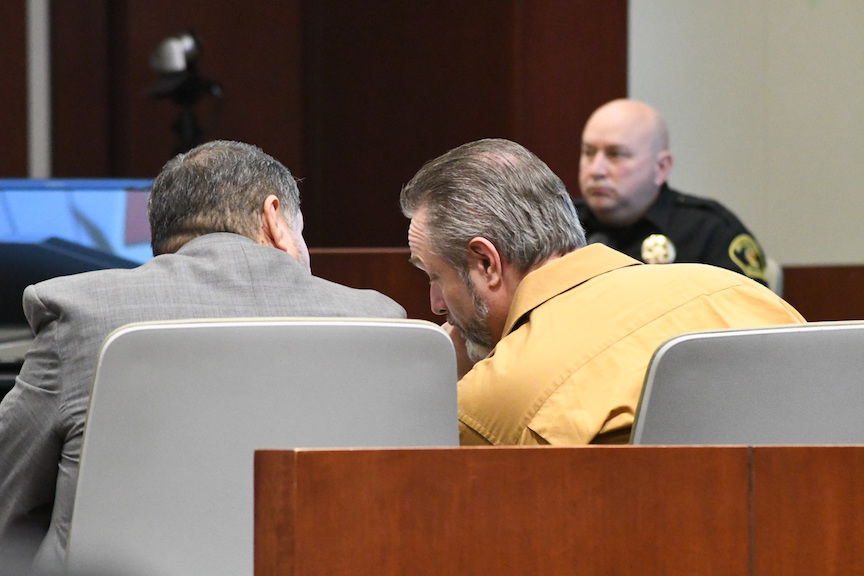 Calaveras County District Attorney Barbara Yook appealed to the seven woman and five man jury to convict Karl Karlsen of murder in the 1991 house fire death of his wife Christina.

Karlsen attorney Richard Esquivel, meanwhile. characterized the prosecution’s case as “schizophrenic,” suggesting it relied on biased witnesses fueled by animus against Karl Karlsen for his role in the death of his son Levi.

“Are we a country of laws or a country run by emotion?” Esquivel asked. “You must go with the law.”

The closing arguments took up all of Thursday, the 15th day of the trial.

Yook summarized the testimony of approximately 35 witnesses, hours of video and audio recording and a litany of documents into a two-and-half hour closing statement, which relied heavily on a overwhelming pathos for Chrstina’s untimely death.

“Christina Alexander Karlsen was so many things to so many people,” Yook said. “To the defendant, she was no more than a piece of property.”

“He extinguished the life that was Christina, and he did it on purpose.”

The courtroom was packed on Thursday with members of the Karlsen and Alexander family, their friends and members of local and national media.

Arlene Meltzer, Christina’s mother, sat in a chair on the outside row beside her husband. Further down in the row sat Christina’s sister Collette Bousson and Karl Karlsen’s daughter Katie, who were joined by Karl Karlsen’s eldest daughter, Erin De Roche, at 2:45 p.m. Among them was Karl Karlsen’s brother Mike Karlsen and other witnesses who lingered for the imminent end of the trial: Seneca County Undersheriff John Cleere and Kenneth Buske, an electrical engineer and fire investigator.

Buske received the brunt of criticism from Esquivel, in a three-hour closing statement.

Calling him a “big shot” who refused to acknowledge any mistakes, Esquivel said Buske’s recollection of the fire scene did not match the indisputable images provided in a video by Christina Karlsen’s cousins.

“His report was complete with errors and inconsistencies,” Esquivel said.

He added that the supposed revelations about Karlsen’s culpability were too old to be considered credible.

“They’ve had 28 years to put a case together and this is what they’ve come up with,” he said. “It wasn’t good enough then, it’s not nearly good enough now.”

At times during his attorney’s closing statement, Karlsen removed his glasses and dab his face with a tissue.

Most of the room sat quiet and attentive as Yook described Christina Karlsen’s final moments.

“She was trapped alone, naked, clutching a washrag to her face,” Yook said. “Those were her last moments… That was how Christina’s life was smothered by the darkest smoke of the fire that was started by the defendant.”

Yook identified evidence presented during the trial: a nine-hour video interrogation with New York law enforcement looking into the death of Levi Karlsen, diagrams of the Karlsen home in Murphys, photos of their children in front of the home, documents related to the fire investigation, check stubs of Karl Karlsen’s payment and the statements of prosecution witnesses.

Yook emphasized the sheer volume of witnesses who indicted Karl Karlsen’s demeanor before and after the fire, and to those who revealed multiple inconsistencies in his claims.

There were the family members, Yook said; his daughter Erin De Roche who survived the fire after her father pulled her out of the room and Bousson who recalled a now-infamous statement that Karl Karlsen referred to his wife, her sister, as a “crispy critter.”

Esquivel disputed the veracity of the comment, and others, as not believable enough to be true.

“That tells you everything you need to know about the case,” he said, referring to the multitude of witnesses as a “numbers game.”

Yook said the first responders of the fire, such as Dennis Mills who recalled finding Christina’s body, and Rich Winn, who was also the owner of a local ice cream shop, said Karl Karlsen asked him for assistance in speeding up the insurance investigation. The investigators associated with State Farm Insurance, Heather Gower Small, Ulises Castellon and Buske, shared in the conclusion ultimately blamed Karl Karlsen for starting the fire and had the data to corroborate it, Yook said. The subsequent law enforcement investigations spearheaded by Cleere and Calaveras County District Attorney’s Office investigator Mike Whitney led to Karlsen’s 2013 conviction in the death of Levi and the charges brought against him in Calaveras County.

Esquivel argued Karlsen was consistent in his representation of the Murphys fire, despite inconsistencies which he said were due to the duration between Christina Karlsen’s death and the investigation.

“The people are painting you a picture and that picture is just a mess,” he said.

He asserted that the prosecution was seeking to indict Karlsen in the death of his wife simply because of the circumstances which lead to revelations about his son’s death.

“They want you to ignore all those contradictions because he killed Levi,” Esquivel said.

“This was his plan,” Yook said. “Just like the other ones.”

She added later, “when you kill somebody for money, it’s murder. The defendant knew. You know.”

It segued into another timeline. On Dec. 7, 1990, Karl Karlsen received a regular paycheck and a Christmas bonus. Five days later, he purchased the life insurance policy on his wife, his children and himself. Yook focused on Dec. 30. According to testimony, she said, that day the first kerosene spill happened, a board was nailed 17 times over the bathroom window and Karl Karlsen confirmed the next two days his closest neighbor would not be home. On Jan. 1, Christina Karlsen died in the house fire. He spoke to a family friend named James Roberts on that day and told him he didn’t know if Levi was able to get out — a contrast to his later claims that he saved Levi by busting out a window and was hit with a fireball after breaking it.

On Jan. 3, his brother and sister-in-law arrived in Murphys from New York to help him grieve. On Jan. 5, and on his personal request, Yook said, Karl Karlsen left with his children back to New York.

She ran clips of the 2012 Cleere interview on the screen, where Karl Karlsen claimed the bathroom window was only large enough to fit a baby out, that he boarded the window eight months before the fire and that he purchased the life insurance three to four months before Christinas’s death.”

Yook explained to the jury that they could convict Karlsen of either first or second degree murder based on their evaluation of the evidence. He is also charged with special allegations of committing the murder for financial gain and that he has a prior murder conviction in the death of Levi.

Yook said the jury could reach the conclusion on first degree murder based on the legal concepts of arson or whether the murder was “wilfull, premeditated and deliberate,” though they did not have to all agree on the same basis.

“If you look at the chain of events and what happened,” Yook said, “there is no other conclusion.”

Esquivel asked the jury to find Karl Karlsen not guilty.

The defense called two witnesses over two days and Karl Karlsen did not testify. Following a prosecution rebuttal on Friday morning, the jury will enter into deliberations.