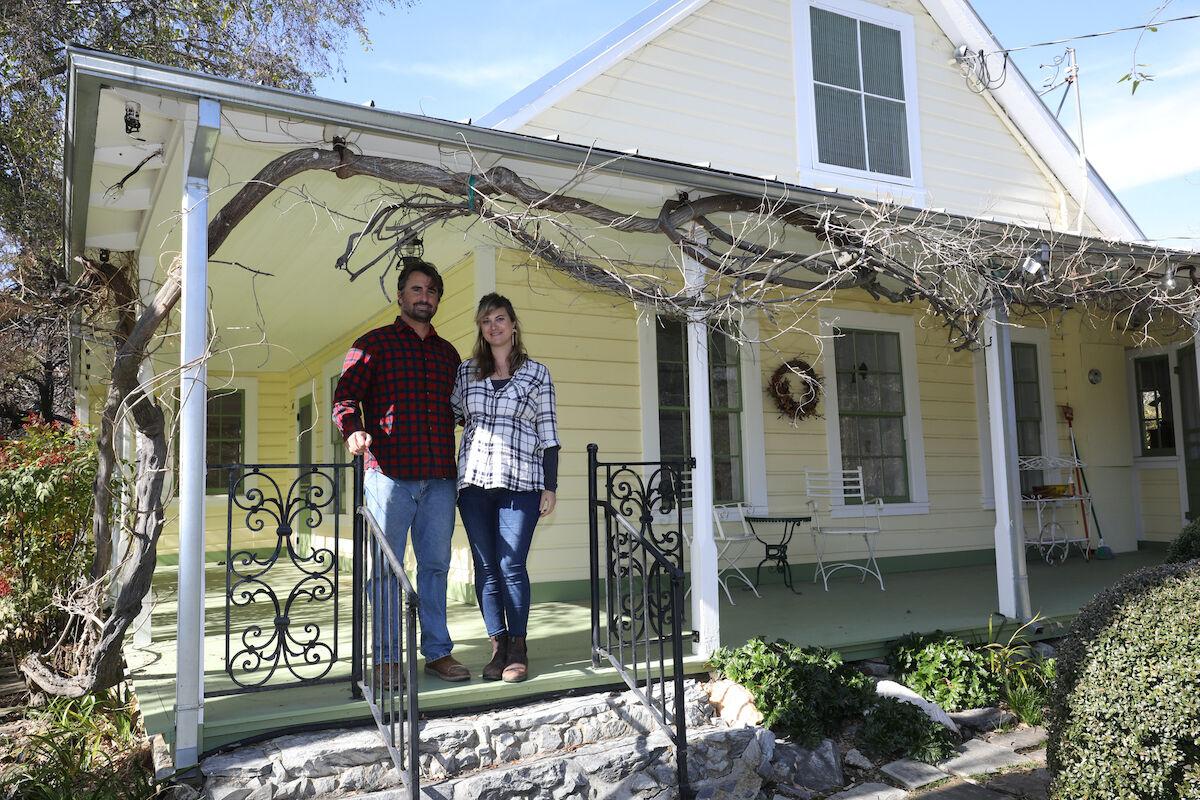 New owners of the Douglas Flat House, Lily and Michael Belli stand on the porch of their home where they were wed in 2019. 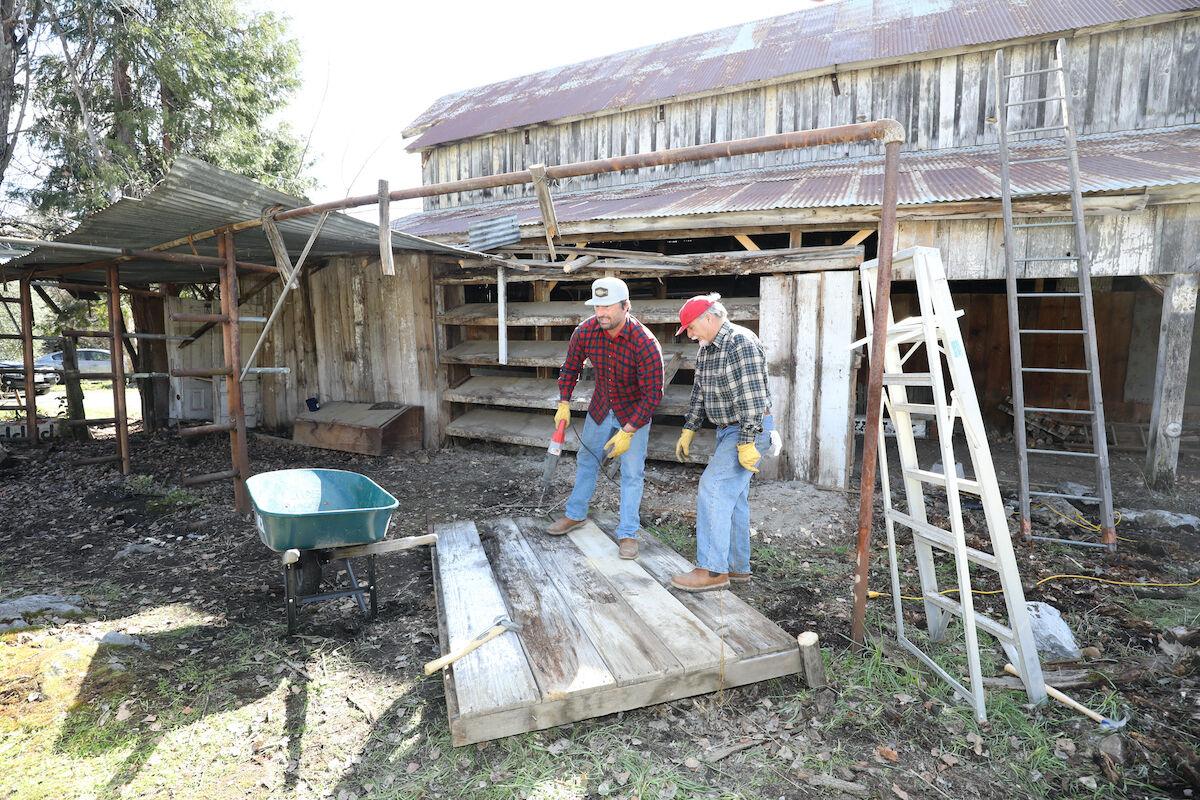 Michael Belli, left, and his dad, Val, right, work on shoring up the old barn on the property where country dances were held at one time. 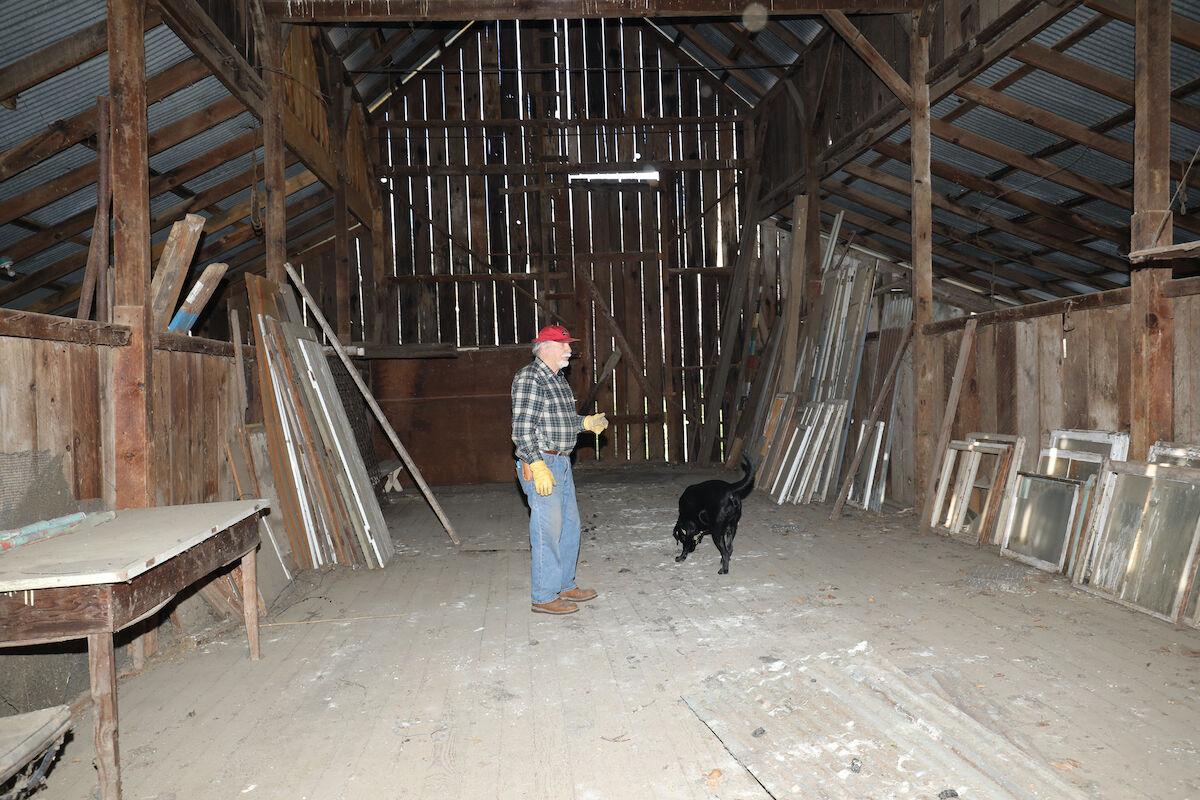 Val Belli stands in the barn with his lab, Sammy. 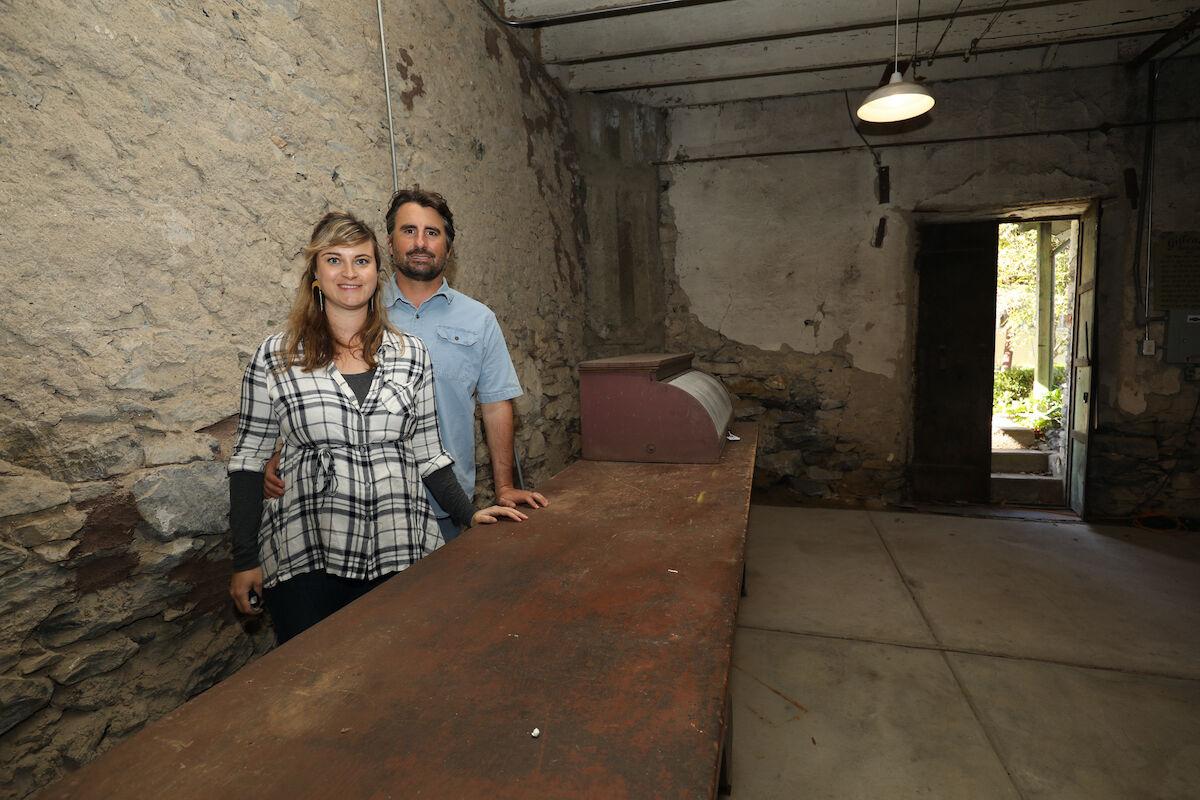 Lily and Michael Belli inside the old Italian Store, a stone building on the property, which they plan to rent out for small events. 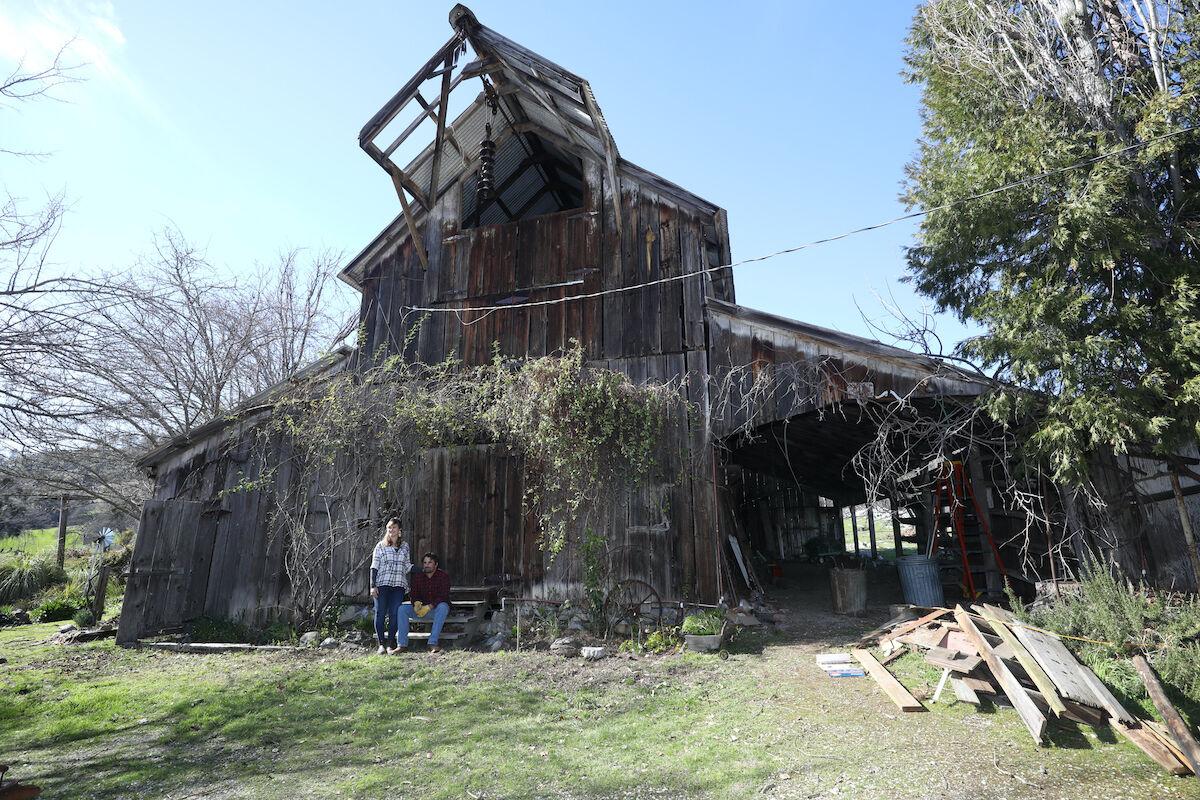 Lili and Michael Belli and family work to renovate the barn and gardens at Douglas Flat House on Main Street in Douglas Flat. 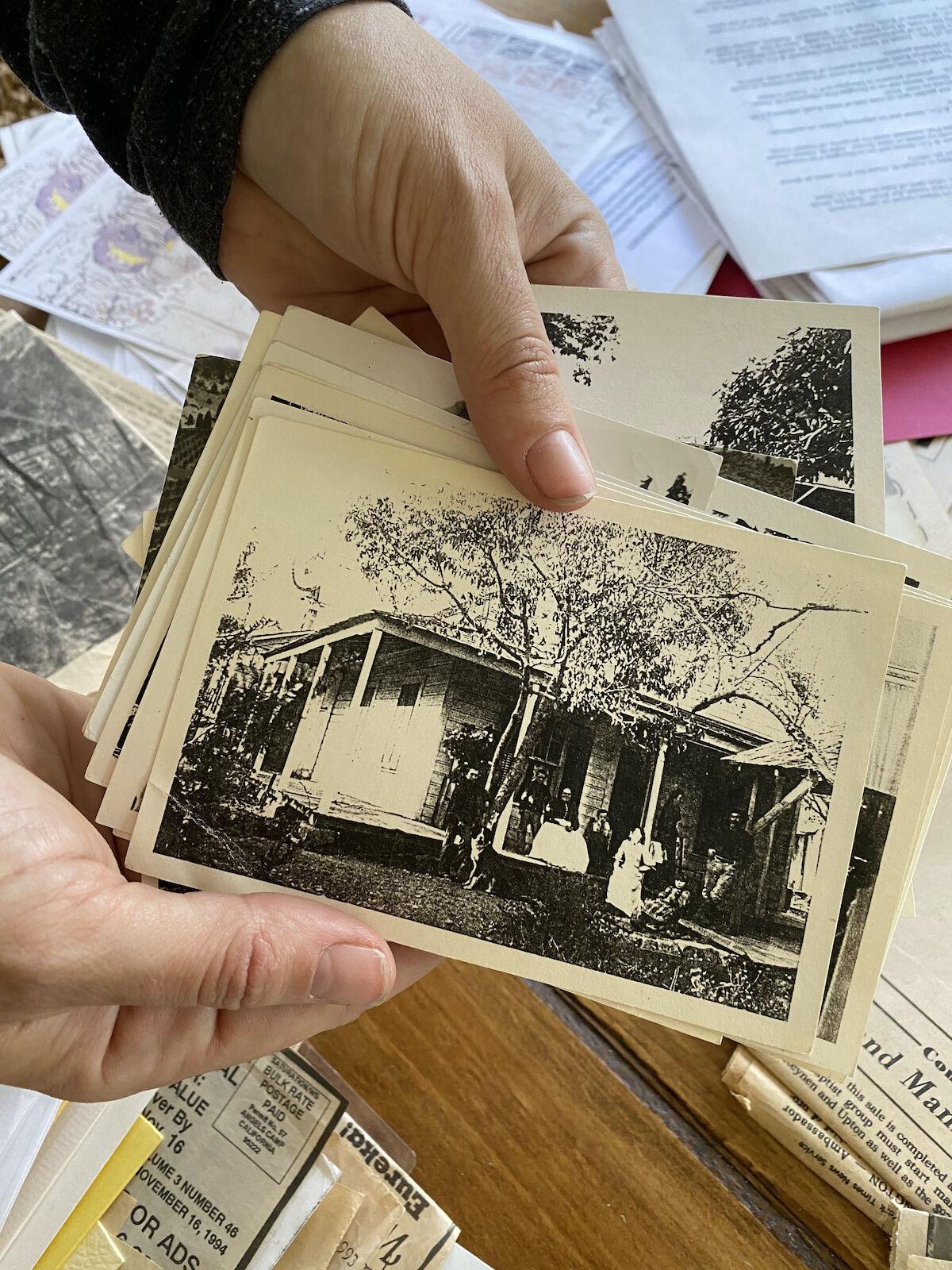 The previous owner gave Lily Belli a box full of newspaper clippings and photos, including this one of the Malaspina family who lived on the property from 1885 to 1968. 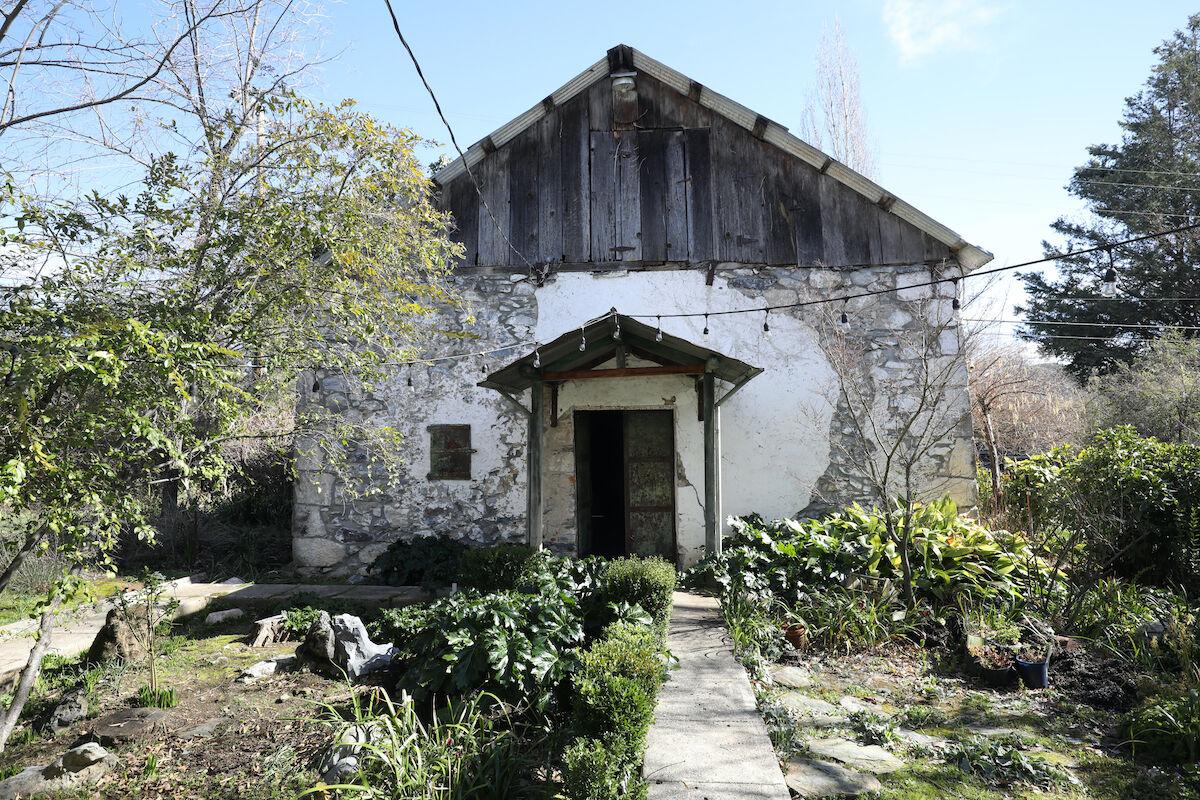 A stone building on the property is "the old Italian store."

New owners of the Douglas Flat House, Lily and Michael Belli stand on the porch of their home where they were wed in 2019.

Michael Belli, left, and his dad, Val, right, work on shoring up the old barn on the property where country dances were held at one time.

Val Belli stands in the barn with his lab, Sammy.

Lily and Michael Belli inside the old Italian Store, a stone building on the property, which they plan to rent out for small events.

Lili and Michael Belli and family work to renovate the barn and gardens at Douglas Flat House on Main Street in Douglas Flat.

The previous owner gave Lily Belli a box full of newspaper clippings and photos, including this one of the Malaspina family who lived on the property from 1885 to 1968.

A stone building on the property is "the old Italian store."

Just off Highway 4 and south of Murphys is a 1.6-acre property bedazzled with a fruit-tree orchard and Gold Rush-era stonemasonry known as Milfiori, Italian for "place of 1,000 flowers."

The property is the recent purchase of on-site residents Lily and Michael Belli, who plan to reclaim the vibrancy of the historic land and return it to its reputation as a community jewel, event space and gathering spot.

"I feel we're breathing new life into a lot of neglected corners, but we don't plan on altering the property dramatically,” said Lily Belli, 31. “We want to maintain it, be the stewards of it … I feel a responsibility to honor and enjoy and share this wonderful place to the best of our ability."

Much of the work since they moved in this month has been curating the landscape by tearing out rampant euphorbia weeds strangulating the property, cutting back hedges, identifying dying trees and cataloging the condition of the property’s four main structures.

Landmark among them is the historic stone-and-plaster building visible from the street, and a farmhouse residence, both charted to approximately 1861. A secondary home, "the cottage," is nestled near a three-story barn from about 1890.

Dotting the property are the living and dead relics of recent antiquity. Two old, dry wells and a water tower dot the property. Just next door is the old Douglas Flat Schoolhouse, which still operates as a community center. A verdant orchard of apple, pear, pomegranate, quince, fig and olive trees and spindling grape vines blossom between them.

"We're trying to save as many plants as we can, even though many of them have been really neglected a long time," Lily Belli said. "We're still discovering the natural delights of this property."

Lily Belli is not sure of the derivation of Milfiori for the property, though she said she has heard it for at least 20 years. The current winter conditions belies its potential, she added, suggesting a much grander bloom come springtime.

"It may have been from earlier given the property's Italian heritage and natural beauty. It's a perfect fit,” she said.

A stone plaque dedicated by Matuca Chapter 1849 of E Clampus Vitus in 2001 identifies some of the early history of Milfiori and the surrounding town of Douglas Flat, once a booming gold-mining town.

The stone building, known as the Italian Store, was built in 1861 by Italian immigrants, Antonio and Caterina Gagliardo, where it served as a post office, social center and Wells Fargo Bank. Some documents appear to incorrectly spell the name of the founders as "Gilleado," Lily Belli said, but much of the earnest and original history is characterized by their stewardship.

And that early history is rife with Wild West hijinks.

Lily Belli said the Italian Store is set with a gun port, a remnant of an armed guard who monitored a safe in a shanty behind the bank. Should anyone attempt to plunder it, "he only had to poke his shotgun through the port that was aligned with the safe and pull the trigger," the plaque said.

At the time, gold flowed in from Table Mountain and along Coyote Creek from the opulent Tertiary Central Hill Channel, supporting mines called Ohio, Hitchcock, Southwestern, Texas and Lone Star.

The family also built the farmhouse residence around 1861, which is surrounded on all sides by a garden.

Around 1885, the Gagliardo family fell on hard times and sold the property to Giacomo (a.k.a James or Jim) Malaspina and his wife, who were originally from Liguria, Italy. It was during their tenure in about 1890, according to tax assessment documents, that the three-story barn was built, which was also used as a public dance hall. The cottage was likely an amalgam of many smaller buildings built during this era and was later the site of the Vallecito Union School District office.

The Malaspinas and their nine children managed a store and farm-garden on the property, and it was sold in 1968 to Cliff and Louise Johnson.

Cliff Johnson was a hobbyist gardener, and Louise Johnson was an artist. Those interests made a communion which brought Milfiori into the modern era as a site of abiding natural beauty.

Bardon and Annie Stevenot, of the legacy vintners Stevenot Wines, bought the property in 1998 and "brought the house itself and the cottage into the 21st century," Lily Belli said.

"They took great care to maintain the historical charm of the house and restored it to what it might have looked like," Lily Belli said, retaining the "wavy glass" on the windows and stripping additions down to their original bones.

They sold the property in 2003 to Willi Krause, who lived there for 16 years and sometimes hosted events there.

"I would love to know more about the people who lived here and what they looked like," Lily Belli said. “I don't know much about the previous residents, though I feel very connected to them."

The provenance of Milfiori and it's ornamentation was made possible through a catalogue of legal documents, newspaper clippings, genealogical research and letters passed through the owners.

"It was kind of a mess when I received it, but I was able to piece together a timeline," Lily Belli said.

Lily Belli was born Lily Stoicheff and attended Bret Harte High School before moving to Santa Cruz for college. She describes herself as "Californian," though her maiden name is Macedonian. Her parents moved to Calaveras County in 1989 (her mother opened Alchemy market), and she first visited Milfiori in high school when her mother catered an event there.

"I was immediately captivated at how beautiful, romantic and dreamy the place was," she said. “I knew if I ever got married, I wanted to get married here."

Lily Belli lived in Santa Cruz for many years and met her husband there, Michael Belli, 35, who tracks his family heritage to Luca, Italy and Sicily. They were engaged in Murphys, and her marital wish came to fruition when they were married at Milfiori in September 2019.

"It was just perfect and romantic and stunning, as I had been dreaming about for 15 years," she said.

Lily Belli is seven months pregnant with a baby boy who is due at the end of April.

They initially declined an offer to purchase Milfiori, but the proposition lingered on Lily Belli's mind. A year later, they visited and were "thrilled" at the condition of the historic structures.

"We decided we were already at a turning point in our lives and we decided to do it," she said.

They bought the property in October 2019 and moved in February 2020.

When the eventual opening comes, Lily Belli hopes to host events ranging from private dinners in the Italian Store to outdoor painting and yoga classes.

Lily Belli, a former food journalist and event planner, may even host small cooking classes in her kitchen. They even plan on "modest-sized" weddings of about 100 guests maximum to keep their events intimate and avoid too much wear and tear on the property.

"I think we need to wait for restrictions on gathering size to lift,” she said. “Some things could happen soon after that. The stone building is ready to take reservations now if people are interested.”

They envision that the grounds will be "made beautiful by the end of the summer," while the barn restoration may take years.

"We want to support it, so it stands for many years to come," she said. "It's mostly just a stunning photo backdrop at this point."