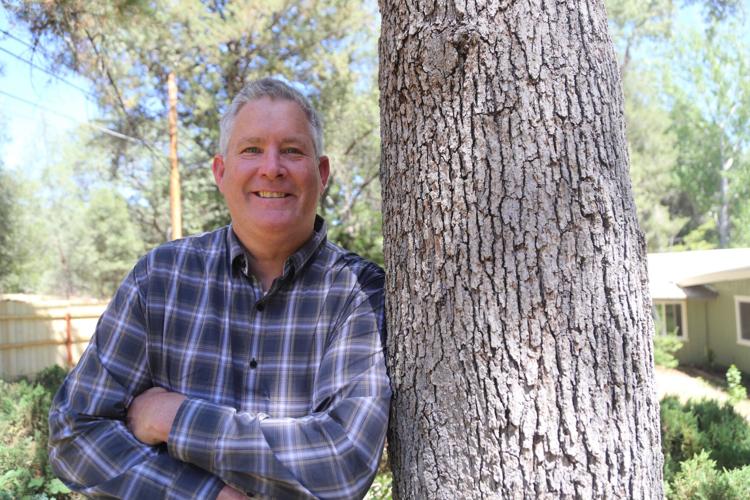 Ron Hamilton, 56, former superintendent of Gold Rush Charter School, a longtime participant and supporter of Tuolumne County 4-H and Mother Lode Fair junior livestock programs, and a community advocate, had to take disability retirement in December due to his increasing difficulties with Parkinson's disease. He was first diagnosed with Parkinson's in 2015. 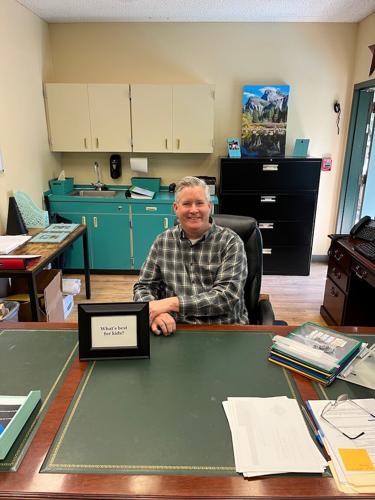 Ron Hamilton made "What's best for kids?" his motto when he first came to Gold Rush Charter School in 2012. 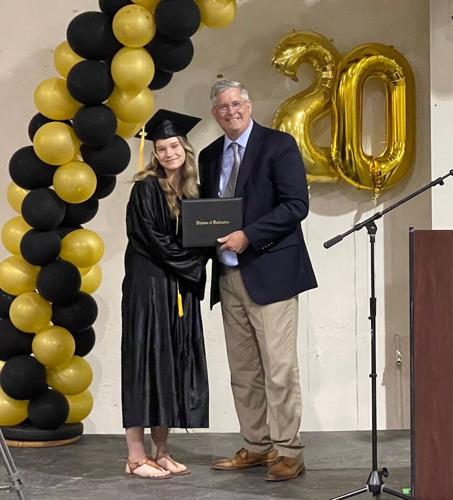 Ron Hamilton with Emilie Jones, a Class of 2022 graduate of Gold Rush Charter School, on June 3. Hamilton's last day of work was Dec. 24 due to an auto accident and his disability retirement is effective June 30.
1 of 3

Ron Hamilton, 56, former superintendent of Gold Rush Charter School, a longtime participant and supporter of Tuolumne County 4-H and Mother Lode Fair junior livestock programs, and a community advocate, had to take disability retirement in December due to his increasing difficulties with Parkinson's disease. He was first diagnosed with Parkinson's in 2015.

Ron Hamilton made "What's best for kids?" his motto when he first came to Gold Rush Charter School in 2012.

Ron Hamilton with Emilie Jones, a Class of 2022 graduate of Gold Rush Charter School, on June 3. Hamilton's last day of work was Dec. 24 due to an auto accident and his disability retirement is effective June 30.

He’s a fifth-generation Tuolumne County native known for his efforts to help others and his willingness to volunteer, including times when he cooked meals for crews assigned to the 2013 Rim Fire, and more recently when he helped raise $30,000 for victims of the August 2021 Washington Fire between Sonora and Jamestown.

Hamilton had to take disability retirement in December due to an auto accident and his increasing difficulties with Parkinson’s. He just attended his final Gold Rush Charter graduation as superintendent on June 3. His retirement officially begins June 30.

A total of 46 graduates comprised the Class of 2022 at Gold Rush Charter School. At the June 3 ceremony, Elisia Garcia, graduating as a junior with a 4.0 grade-point average, was valedictorian. Daniel Higgs, a senior with a 3.98 GPA, was salutatorian.

Asked for perspective on his time at Gold Rush Charter School and about his challenges confronting Parkinson’s, Hamilton spoke Thursday at the home where he grew up in Jamestown. His parents recently passed, and his family and friends were busy arranging an estate sale.

When he came to Gold Rush Charter School in 2012 there were 225 students. He brought a sign with him, a gift from a Copperopolis educator, that said, “What’s best for kids?” and he said that became a motto for him and his team.

Hamilton also worked with teachers and students to help them develop personal lesson plans to meet each individual student’s needs.

Jennie Lou Tippett, a Gold Rush Charter School parent with eight of nine children who attended the country school or independent study at one time or another over the course of 13 years, said Friday, “We just had our sixth eighth-grade graduate.”

“Ron was intuitive and informed about not just the students’ needs but their whole family’s needs and situations,” Tippett said. “We think of Ron as someone who is always putting on public fundraisers for many good causes. But he also quietly helped and encouraged many Gold Rush Charter School families out of the public eye.”

Tippett said Hamilton came from a big family himself, so he knew what it was like for students who came from big families. He knew when the Tippetts had three kids trying to go to science camp, and he always helped the Tippetts figure out ways to make sure all of their children were involved in all programs and field trips like the rest of their classmates.

“He did that for many families, not just ours,” Tippett said. “He treated everyone equal. It didn’t matter if it was someone who went to his church or went to 4-H with him. He treated everybody the same and believed everyone deserves a chance at the unique education Gold Rush offers.”

Hamilton’s work ethic and his focus on students left impressions on staff and teachers who worked with him at Gold Rush.

“Ron, always the first thing he asks is, ‘What’s best for the students?’ That is always his focus,” said Bonnie Ruby, a Gold Rush Charter teacher for nine years, who teaches reading intervention for students from kindergarten through third grade. “He’s always supported students, parents, and staff.”

“We definitely miss his heart for the students and his good nature,” Ruby said Friday in a phone interview. “We’re going to miss his personality. He cared about us as individuals, and our families. We’re going to miss the family feel he brought to Gold Rush. That’s another thing he says, ‘Family is first.’ We’re already missing him. We wanted him to be able to finish out the year. We had to do what we could without him.”

Ruby said it was moving to have Hamilton at Gold Rush Charter School’s graduation two weeks ago.

“It was very nice to see him there at graduation and hear him say the last things to the students and the staff,” Ruby said. “I love Ron’s heart, both for the students, for the families, and for his staff.”

By early 2020, just before the COVID-19 pandemic, Gold Rush Charter had grown to about 525 students. Recently, school administrators were able to set aside $1.8 million in surplus revenue for the future.

Hamilton said he began noticing he had some coordination issues before he was diagnosed with Parkinson’s in 2015.

He’d already had brain surgery back in 1999 for Chiari malformation, in which part of the brain at the back of the skull bulges through a normal opening in the skull where it joins the spinal canal, putting pressure on parts of the brain and spinal cord. Before his Parkinson’s diagnosis, he thought he was experiencing post-surgery complications.

“Then one day at the fair, my handwriting scribbled,” he said. “That had never happened before. I went to see a neurologist and he said, ‘You’re here about your Parkinson’s aren’t you?’ I asked how he knew that and he said, ‘By the way you walk.’ I was shuffling, and I didn’t move my right arm. Parkinson’s attacks your dominant side first. My right arm, I can’t write any more and my motor skills are neutralized.”

Hamilton says he also has Lewy body dementia, the second-most common type of progressive dementia after Alzheimer’s disease. He said it’s important to note that he has had to take disability retirement due to his health issues, not because of his age.

“I’m 56,” he said. “If I could keep working, I’d stay with the kids. But I can’t put on my clothes by myself any more. My memory is not what it was. Normally I’m asleep right now, in the afternoon.”

A bird chirped in a nearby tree. Hamilton recognized it immediately.

“Hear that bluebird singing?” he asked. Growing up in Jamestown he learned the songs and sounds of robins, jays, quail, turkeys, screech owls, barn owls, and other birds. Wooden birds’ nests were nailed to multiple trees on his family’s property, trees that included white oak, red oak, black oak, and Douglas fir.

Hamilton said he had eight siblings growing up, and two of them passed away at young ages. They raised pigs on the family’s land, and he joined 4-H in 1974 at age 9. He says he retired from 4-H two years ago due to Parkinson’s. He’s the president of the Mother Lode Fair board this year, and he said he’s helping out because he has experience.

“To look at me, I mostly look healthy, but inside I’m shaking,” he said. “I have no strength or energy. I can’t sleep at night due to the pain, and I can’t stay awake during the day. I’m now stuttering more and falling down more.”

He and his wife started the Ronald and Krishna Hamilton Parkinson’s Foundation through the Sonora Area Foundation back in 2018, to raise social awareness and community support for local residents who struggle with Parkinson’s disease. The foundation helps those who need financial assistance for medication and for hotels when traveling to doctors’ appointments.

“As a caregiver, it’s frustrating as you watch your loved one struggle each day with the emotional, physical, and mental effects of Parkinson’s disease,” Krishna Hamilton said Thursday evening.

Parkinson’s takes its toll on the whole family, she said. Your whole lifestyle changes as you watch a once-active person full of life and energy decline due to the disease and know there is no cure.

“It’s important for everyone involved to know that God will carry you through these difficult days,” Krishna Hamilton said. “You must keep your faith strong.”