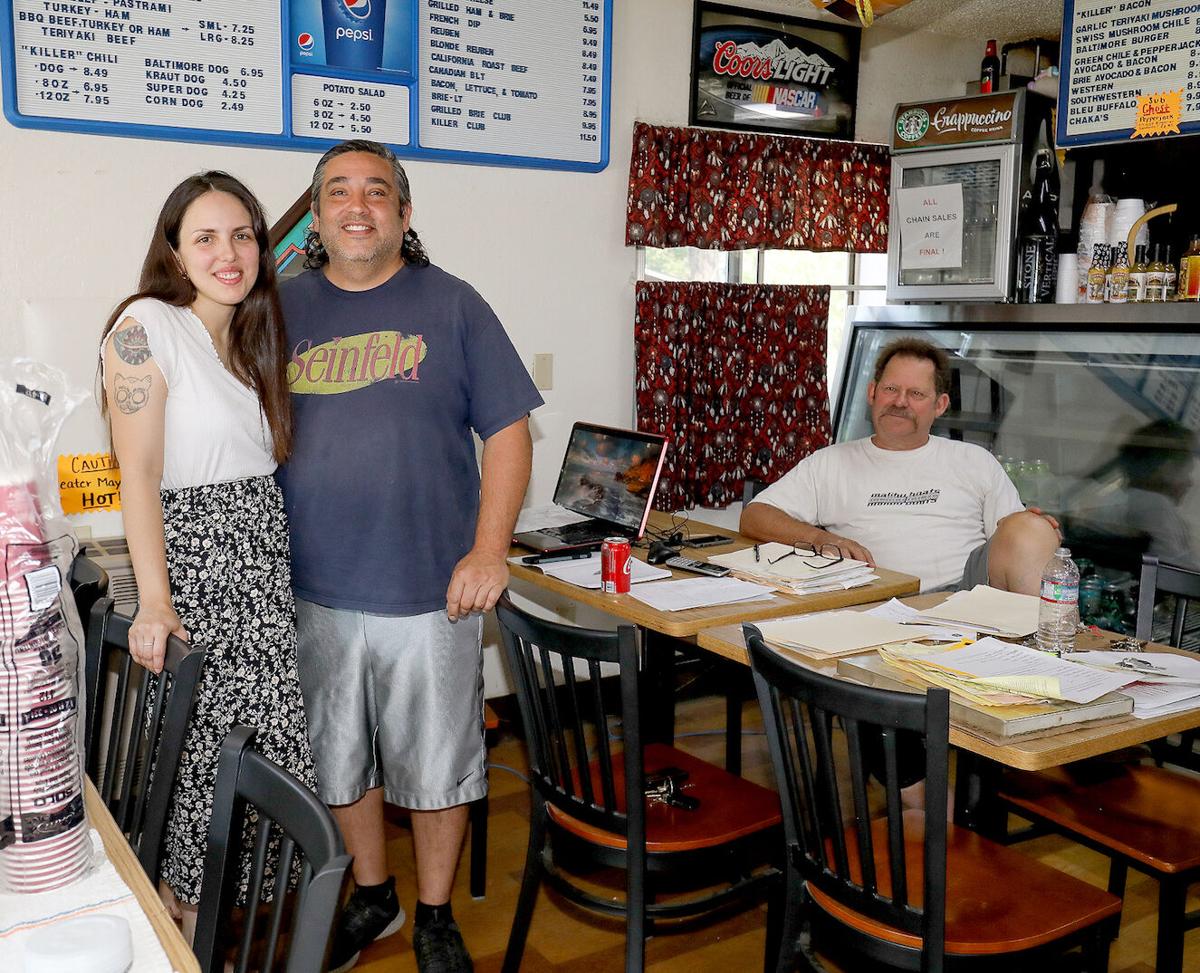 Andy Cohen takes a seat as Chelsea Robbins (left) and Asher Feldman, the new owners of Andy's Mountain Grill & Deli in Mi-Wuk Village, pose for a photo in their newly acquired business. 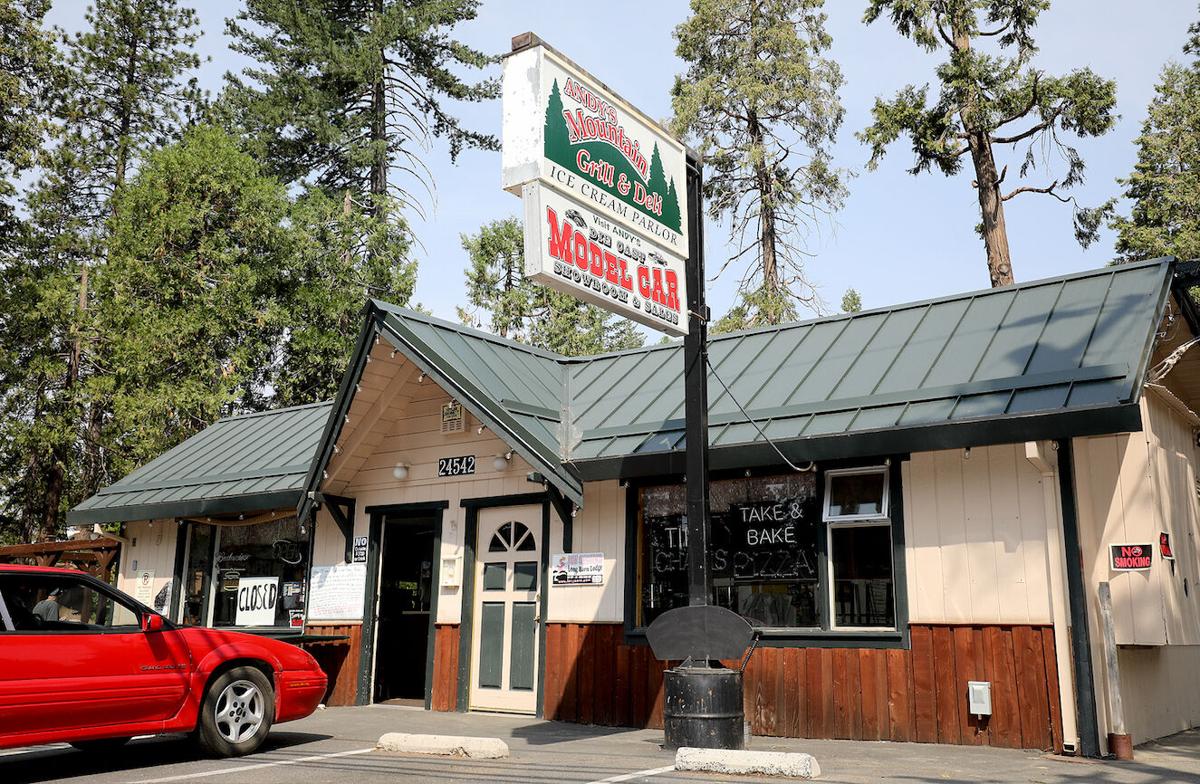 The Mi-Wuk Village eatery has been closed since June 1 due to the lack of a buyer and shortage of workers.

Andy Cohen takes a seat as Chelsea Robbins (left) and Asher Feldman, the new owners of Andy's Mountain Grill & Deli in Mi-Wuk Village, pose for a photo in their newly acquired business.

The Mi-Wuk Village eatery has been closed since June 1 due to the lack of a buyer and shortage of workers.

A couple from Florida has purchased Andy’s Mountain Grill & Deli in Mi-Wuk Village, which closed in June after 25 years in business, and say they intend to keep the namesake’s legacy going with the same menu and recipes when they reopen.

Andy Cohen announced the new owners of his business on Monday morning as Asher Feldman, 42, and his fiancée, Chelsea Robbins, 28, who are coming to the Mother Lode from Leesburg, Florida, outside Orlando.

The couple hopes to reopen the business in August. Feldman saod he’s been working in kitchens, restaurants, and catering for decades, since he got out of high school.

Cohen and Feldman declined to share the purchase price, though they both emphasized the business will retain its full name and menu as the final agreement includes Andy’s burger secrets.

“Coming from the restaurant industry, I know how much he put into it,” Feldman said of Cohen. “I want to keep his legacy going. Everything on the menu is carrying over, and most importantly, we’ll be keeping all his recipes.”

The final deal sealing the change in ownership of the business also includes Cohen’s 1964 Ford Econoline, the four-cylinder van painted with the Andy’s Mountain Grill & Deli logo that’s been parked in front of the eatery for years.

Cohen and Feldman greeted visitors Monday from two tables inside the dining room at Andy’s Mountain Grill & Deli, which remains closed for business. Cohen had a couple stacks of papers in folders in front of him, Feldman had a laptop open, and they were listening to someone explaining transaction details on a speaker phone.

“It’s a pain in the neck getting the utilities and other things reconnected and restarted,” Cohen said. “This is our table of misery.”

Feldman said he grew up in Fort Lauderdale, Florida, and his culinary experience and love of cooking began when he first got out of high school.

“I was kitchen manager for a pizza restaurant in Pembroke Pines,” Feldman said. “They had two chefs with 50 years collective experience and they gave me a good start.”

He moved on to Big Tomato Market Grill in Pembroke Pines, Florida, where he was executive chef, and the New River Pizza & Grill in Fort Lauderdale. He has also worked as corporate executive chef for two Seminole Hard Rock Hotel & Casino locations, in Tampa and Hollywood, both in Florida.

Feldman said he also ran his own businesses, Loggerhead Catering in Dania, Florida, and Chef Consulting, Inc., in Weston, Florida.

The couple, who are bringing Robbins’ two young sons with them, said they decided to take on the new business challenge and relocate across the country on the edges of the Stanislaus National Forest in the Central Sierra Nevada because they have connections here, they’ve visited before, and they love the area.

“It’s a beautiful town,” Feldman said of Mi-Wuk Village. “We want somewhere safe where the boys can grow up. We love the nature, the hiking, the mountains.”

“We have family here,” Robbins added, “in Twain Harte.”

Cohen has removed scale models he had displayed in a room next to the eatery’s dining room in the same building. Feldman said he and Robbins will open a coffee shop in that space, and Robbins will run it.

“We’re going to have the best pastries you’ve ever tasted,” Feldman said, adding he does not intend to start a pastry war with another of Tuolumne County’s venerable eating institutions, Alicia’s Sugar Shack, just down the road in Sugar Pine.

Feldman said one previous visit to the Highway 108 corridor and the Stanislaus National Forest was enough to convince him this is where he wants he and his loved ones to be.

Cohen, a Los Angeles County native who brought his love of burgers and barbecue to the Mother Lode in the 1990s, is in his 60s now. He first opened Andy’s in December 1995 and closed on June 1.

In May, before closing the business, Cohen said one secret to perfect burgers is “start with fresh 100% beef: no seasoning, no butter, never frozen, and char-broiling.”

Cohen still lives in the area and says he’s not planning to move, and will continue helping with the annual Christmas CHiPS for Kids toy drive. Last December he drove a Sugarpine Unified District bus full of presents for youngsters to the California Highway Patrol Sonora headquarters in Jamestown.

“I’ll see you in December,” Cohen said on Monday.