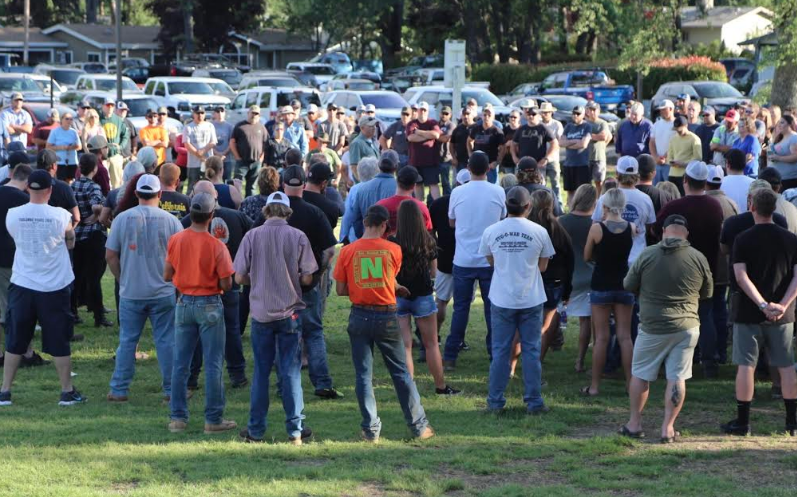 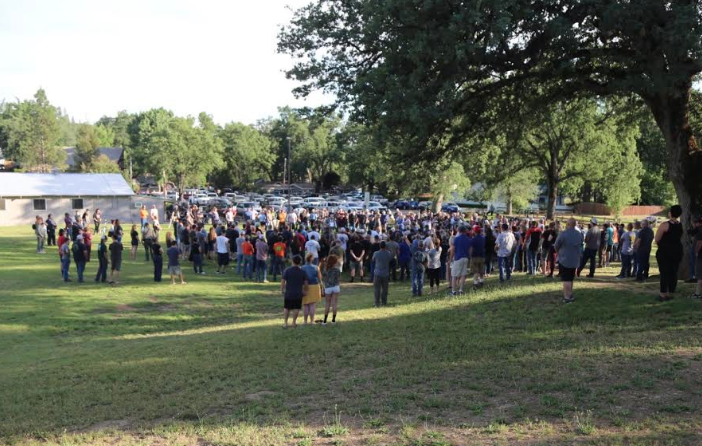 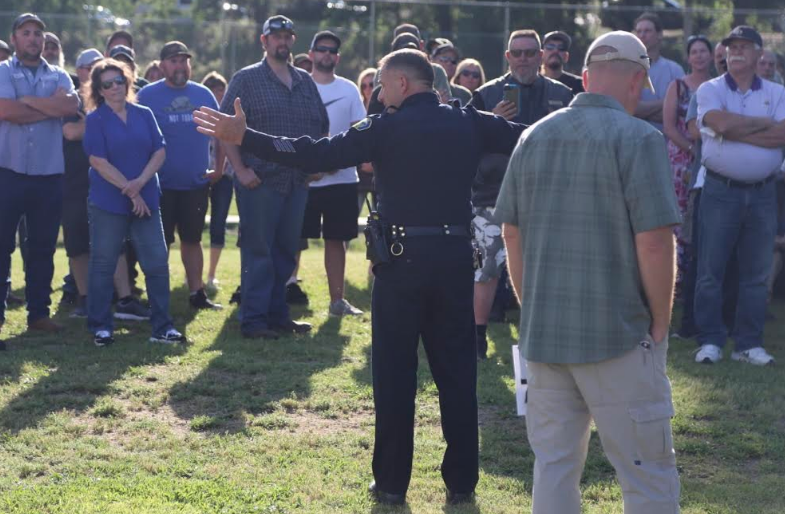 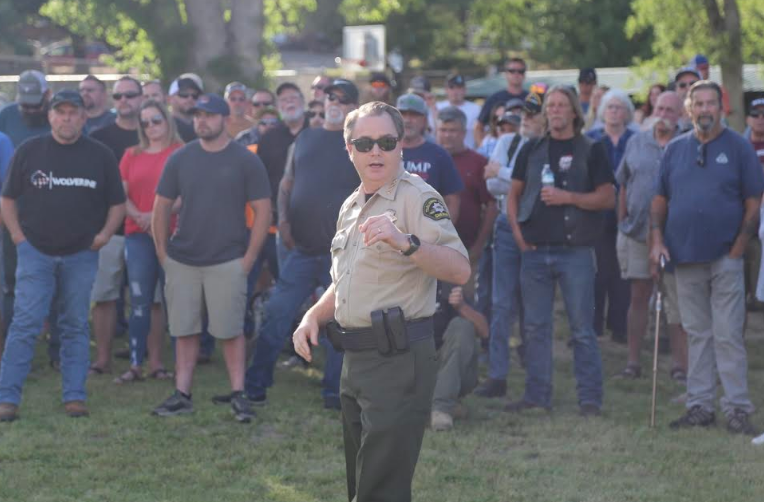 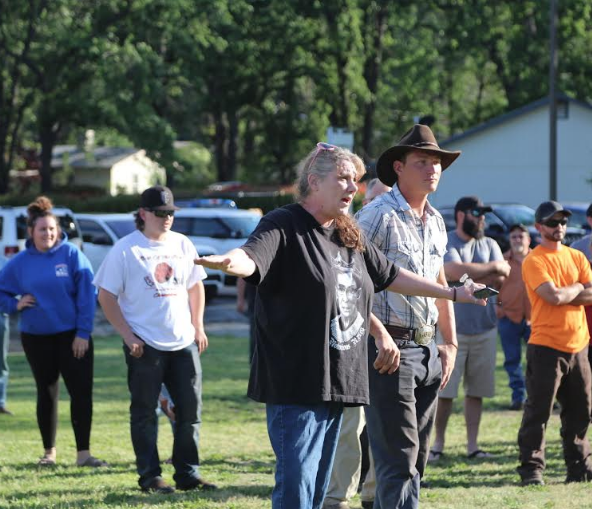 An organizer of the Sonora protest on Wednesday addressed concerns raised by people meeting in Soulsbyville Tuesday night.

An organizer of the Sonora protest on Wednesday addressed concerns raised by people meeting in Soulsbyville Tuesday night.

About 200 people, concerned that a George Floyd protest in downtown Sonora at 1 p.m. Wednesday could devolve into looting and rioting, attended a pre-protest meeting led in part by State of Jefferson advocates and attended by Sonora’s chief of police and the Tuolumne County sheriff.

State of Jefferson supporters intend to be downtown during the protest, organizers Dave Titchenal and Joe Bick said.

“I have 17 years military experience,” Bick said shortly after the meeting started at 6 p.m. “The definition of a state where civilians are combatants is civil war. My time with the State of Jefferson has been preparing for situations like this, to keep the peace. It’s better to be prepared.”

Turu VanderWiel, Sonora police chief, and Bill Pooley, Tuolumne County sheriff, both said they’ve heard talk on social media about people coming from out of town to disrupt the protest at Courthouse Square, and both said they had been unable to find any solid information to confirm any of the rumors.

“We’re going to be out in full force tomorrow,” VanderWiel said to applause. “As far as being overrun, that’s not going to happen.”

Sonora police expect a small turnout of protesters at Courthouse Square, VanderWiel said. The police chief welcomed the cooperation of anyone who wants to monitor the protest to ensure nothing gets out of hand.

“Extra eyes, extra bodies, we welcome that,” VanderWiel said. “Guns, we ask you not to do that. Let us do the apprehensions. Let us do the use of force.”

Pooley said, “Every cop we have is going to be on duty tomorrow.”

Law enforcement in Calaveras and Stanislaus counties are aware of the protest Wednesday in Sonora. There is a protest planned at 10 a.m. in Oakdale and some protesters may decide to come up here to Sonora, Pooley said.

“I’ve had calls from people saying, ‘I’m bringing a gun to this’ and that scares the death out of me,” Pooley said. “Please, no guns, no open carry. This is not an open carry state.”

The sheriff emphasized afterwards he and other local law enforcement view Oakdale’s 10 a.m. protest as a possible barometer for what to expect in Sonora. If Oakdale’s peaceful or if there’s riots, that’s good information for law enforcement monitoring the Sonora protest, Pooley said.

“Every rumor we’ve checked out we’ve been unable to substantiate, and we’ve disproved some of the rumors,” Pooley said. “There have been a lot of peaceful protests, like last night in Patterson, in Stanislaus County, it was absolutely peaceful. I think we’re going to be fine here.”

Lt. Jarrod Tippin with the Tuolumne County Sheriff’s Office said he’s had to deploy on multiple civil unrest incidents in his time in law enforcement.

“People are upset about what happened in Minnesota,” Tippin said of the way a Minneapolis police officer kept a knee on Floyd’s neck more than eight minutes before he died. “Everybody should be upset. If you’re not upset you should be. People are going to be angry tomorrow. Expect that.”

A woman who said she represents the protesters spoke briefly and emphasized people intend to be peaceful at Courthouse Square. Others had suggestions about what to do tomorrow.

“Can’t we move the protest by Walmart?” asked Lon Lacey, 29, of Sonora, to much laughter. “Nobody cares if they burn that down.”

Lacey also asked Pooley, “Are we going to posse up? Where can we sign up to posse?”

Pooley made it clear he’s not organizing any posses.

Bick told the gathering he encourages people to go downtown for a walk Wednesday. Spend time at a business or businesses, spend a couple dollars, and if things don’t go well during the protest, “raise your voice, use your cell phone.”

Be a good witness, make video, Bick said earlier. Respect everyone. At one point Bick said he’d been asked about vacant buildings, and Bick asked who has folding chairs, and who wants to sit around downtown tomorrow?

He also suggested that people bring their big dogs with them.

The protesters have empathy for people and that’s honorable and to be commended, Bick said.

“We want to provide a peaceful, visual deterrent for looters and rioters who may not be from Tuolumne County,” Bick said. “If you’re walking around, spend some money. Let’s make this a positive event.”