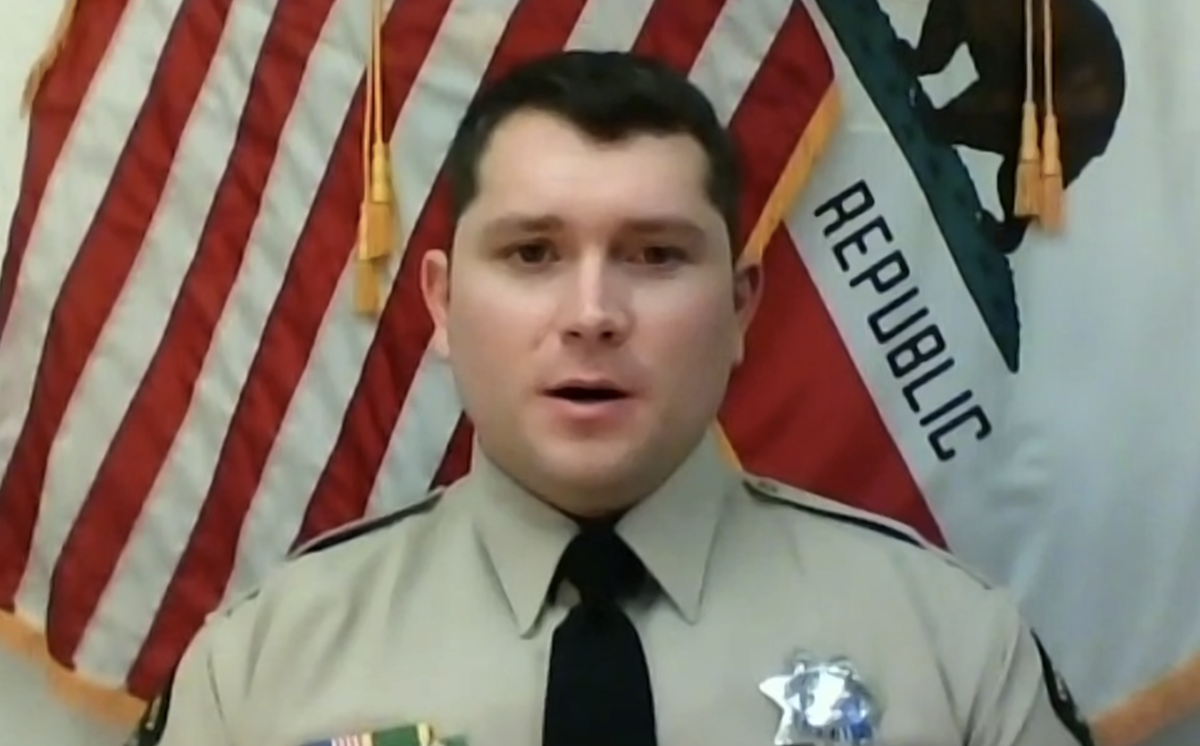 Tuolumne County Sheriff's Cpl. Andrew Long, 32, a Sonora native, recounts saving a man from jumping off a bridge during a press conference over Zoom on Tuesday. 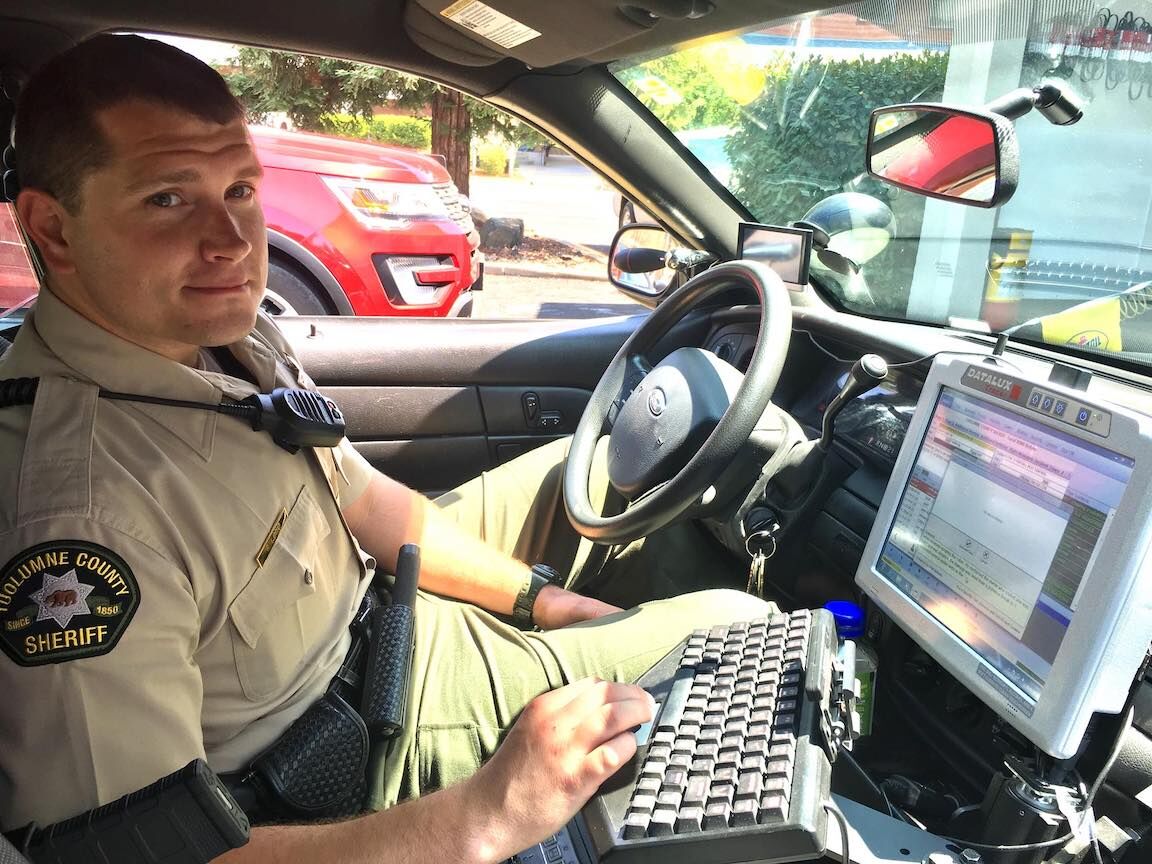 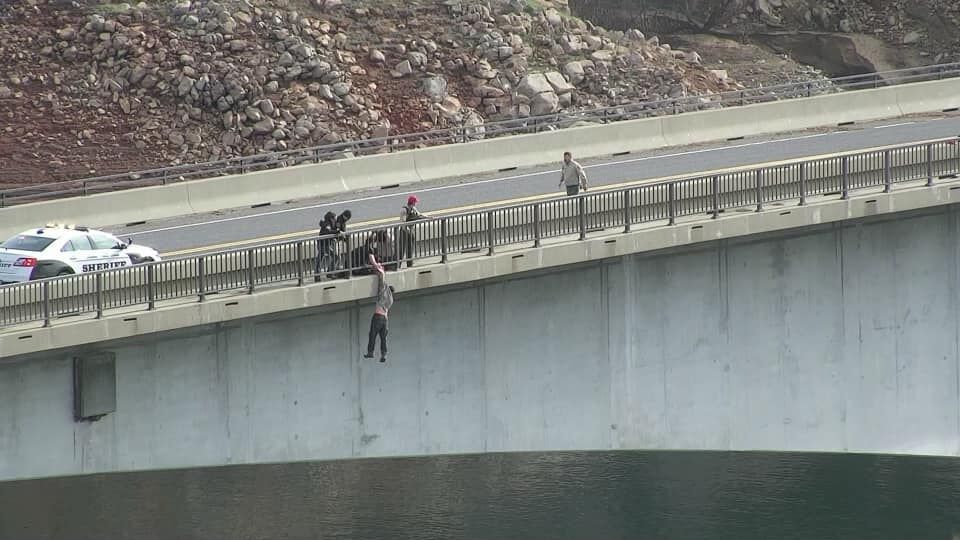 Tuolumne County Sheriff's Cpl. Andrew Long hangs onto the arm of a Tuolumne County man who attempted to jump from the Parrotts Ferry Bridge about 10 a.m. Feb. 8, 2021.

Tuolumne County Sheriff's Cpl. Andrew Long, 32, a Sonora native, recounts saving a man from jumping off a bridge during a press conference over Zoom on Tuesday.

Tuolumne County Sheriff's Cpl. Andrew Long hangs onto the arm of a Tuolumne County man who attempted to jump from the Parrotts Ferry Bridge about 10 a.m. Feb. 8, 2021.

Tuolumne County Sheriff’s Cpl. Andrew Long credits adrenaline, a little bit of luck and his partners in law enforcement for helping him prevent a man from taking his own life by jumping off of Parrotts Ferry Bridge over New Melones Reservoir Monday morning.

Long detailed the events that led up to the dramatic shot during a press conference over Zoom with regional media outlets on Tuesday and said that he didn’t grasp the severity of the situation until he saw the photo, but he doesn’t consider himself a hero.

“I’m a first responder … this is what we do,” he said. “We’re there for people’s worst and their best days, we are here to help people, we’ve all taken an oath to do it, and everyday this is what we deal with, it’s just rarely in the spotlight for other people to see.”

The incident began about 12:30 a.m. Monday when the Sheriff’s Office received a call about a Tuolumne County man who was at a bridge saying he was going to kill himself.

Calaveras County law enforcement agencies and California Highway Patrol assisted in helping the Sheriff’s Office check around both the Stevenot and Parrotts Ferry bridges over New Melones Reservoir, but were unable to locate any sign of the man until his vehicle was found by a Tuolumne County Sheriff’s deputy about 3:30 a.m.

A volunteer Tuolumne County search-and-rescue team was sent about 7 a.m. to check the banks of the reservoir and around Parrotts Ferry Bridge, then Long said he noticed a man walk up on the bridge about “9 a.m. or so” and found out it was the man they were looking for when he spoke to him.

Long said through speaking to the man he came to learn that the man had been in the area while they were searching and aware of their presence, but he doesn’t know if anyone will ever know what made him decide to go on the bridge.

“I know he was in the area, he just wasn’t immediately where I was searching or where my resources were searching,” he said.

During the hours-long search before the man appeared on the bridge, Long said he was just hoping they weren’t too late.

Long said he spoke to the man on the bridge for about 15 to 20 minutes from a distance of about 15 feet, mainly about the man’s life and family in an effort to get to know him a little better. The man apparently didn’t want to speak with Long much and at one point told him it was the longest he’s ever spoken with a cop.

The man further distanced himself from Long as more resources arrived on scene and was about 40 to 50 feet away when he began to climb over the bridge’s guard railing, prompting Long to break out into a sprint in hopes of saving him.

Long said he dove down and was “lucky enough” to grab the man’s forearm through the railing despite having a broken thumb at the time. He was then able to wrap both hands around the man’s left forearm just below the wrist.

The man dangled for about 30 seconds with Long holding onto him before Calaveras County Sheriff’s Deputy Jason Markovitz reached them and helped pull the man back over the railing with search-and-rescue volunteers who quickly rigged up a rope system.

“I asked him for his arm, reminded him that we all have a reason to live, and he has things to look forward to and we are here to help him,” he said. “I just did my best to try to remind him of that.”

Long said they were able to provide the man with mental health assistance after the incident and hopes that it will help him.

This wasn’t the first time Long has dealt with people in a mental health crisis during his career in law enforcement and the military, which includes five years with the Sheriff’s Office and nearly eight years as a Navy corpsman prior to that. He has served a year-long tour of Afghanistan with the Marine Corps, authored a book on emergency and combat first aid, and earned a bachelor’s degree in homeland security and emergency management, according to a Facebook post from the Sheriff’s Office in 2018.

“Anytime you’re in a life-and-death situation, it just makes you appreciate life,” Long said of how the experience on Monday affected him. “It made me appreciate life and everything I have going for me, and I hope that it will eventually do the same for him.”

Long said he couldn’t say whether the COVID-19 situation over the past year contributed at all to the man’s mental state, but he does hope more mental health resources are provided to help people who are struggling. He reminded people of existing resources like the National Suicide Prevention Lifeline at (800) 273-8255.