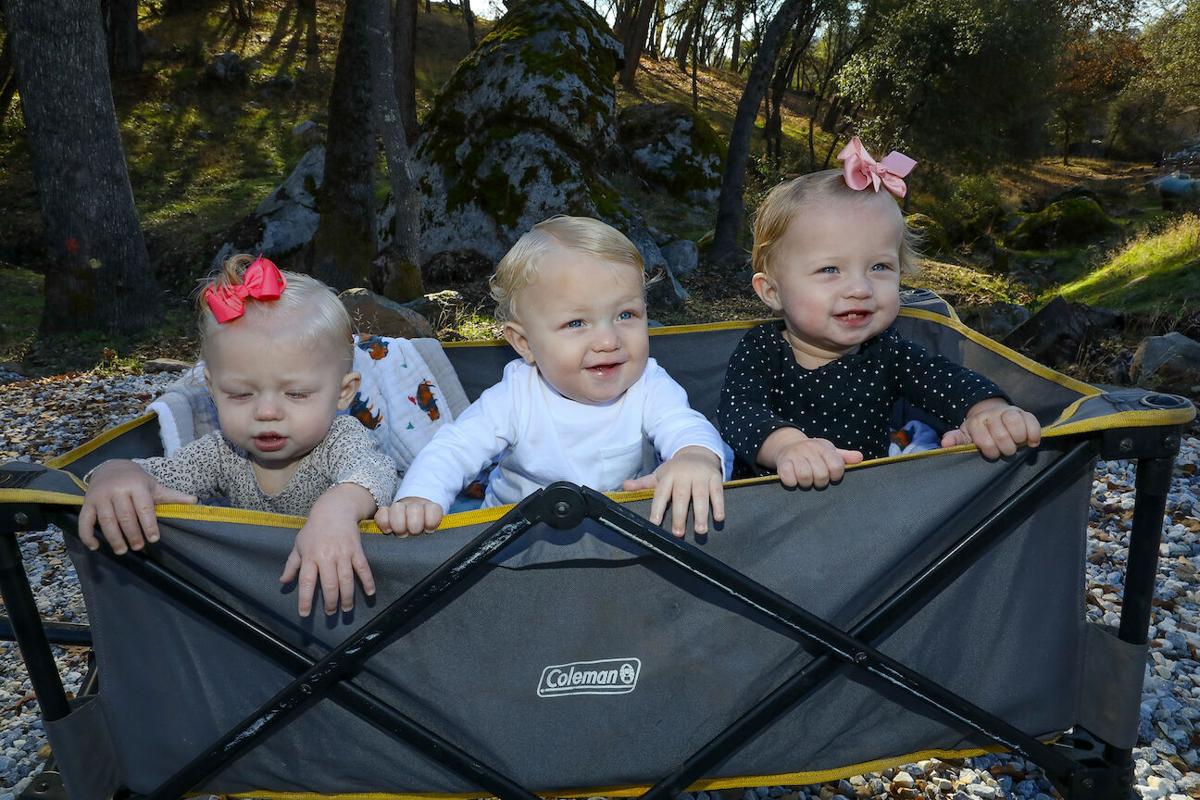 One-year-old triplets Kinsley, Kasyn and Kaylie look forward to a walk at their home in Sonora on Jan. 8. 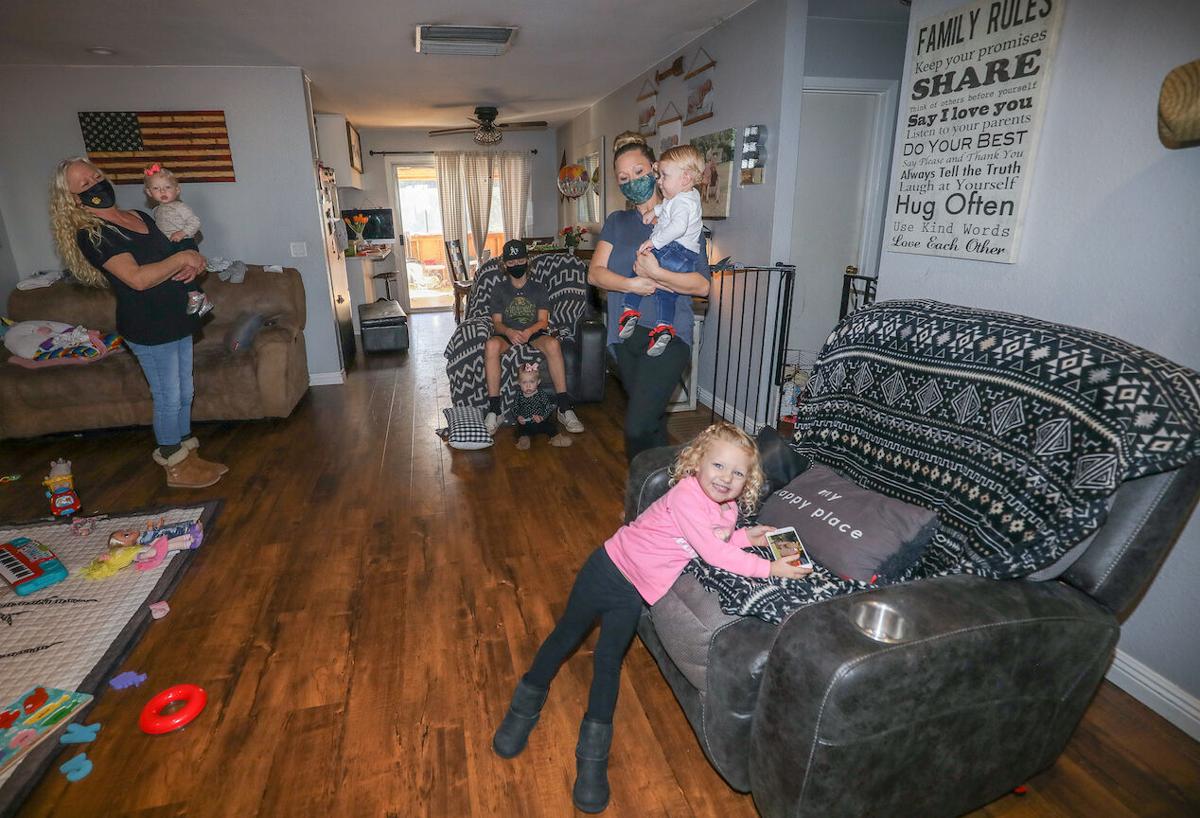 Kasie Hart, left, gets some help with her triplets and 3-year-old daughter, Jamasyn, from her mother, Tarie Townsend, left, and her 15-year-old son Treydan, center. 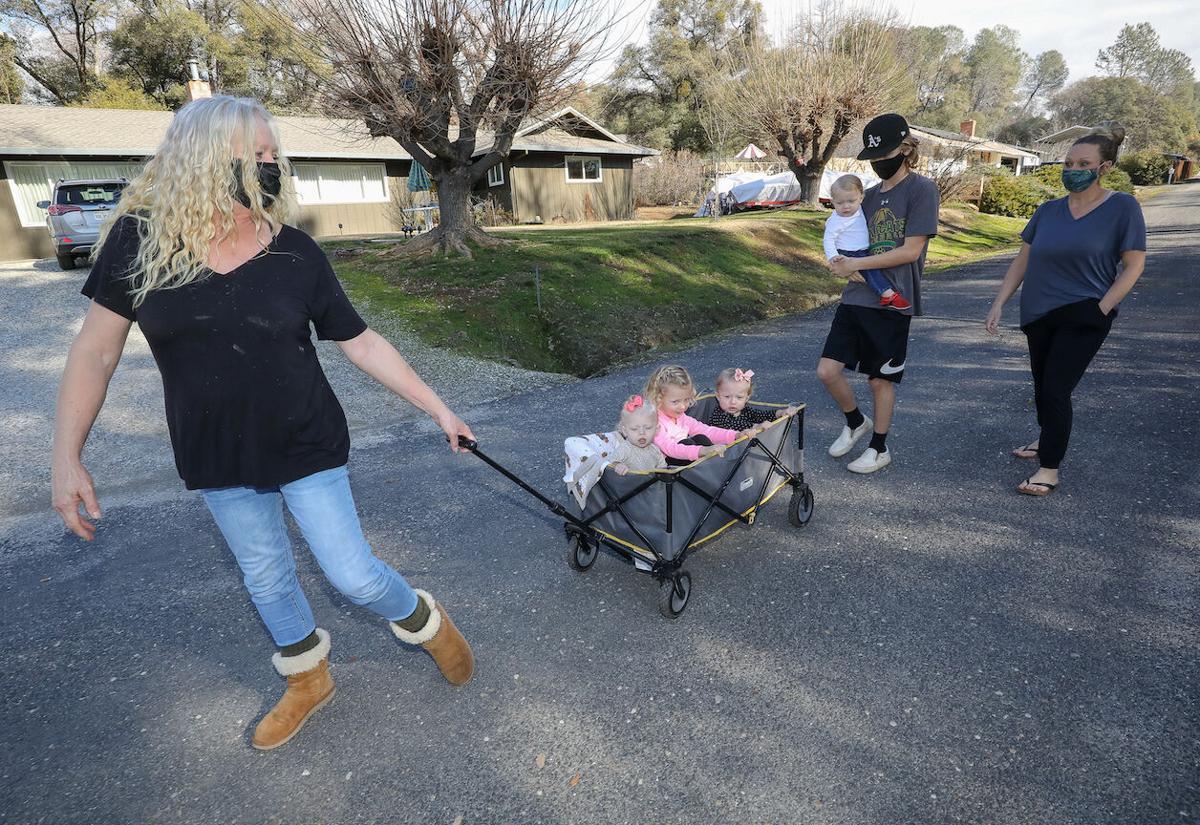 The family heads out for a walk in the neighborhood. (From left) Grandmother, Tarie Townsend, Kinsley, Jamasyn, Kaylie, Treydan, holding Kasyn and mom, Kasie.

One-year-old triplets Kinsley, Kasyn and Kaylie look forward to a walk at their home in Sonora on Jan. 8.

Kasie Hart, left, gets some help with her triplets and 3-year-old daughter, Jamasyn, from her mother, Tarie Townsend, left, and her 15-year-old son Treydan, center.

The family heads out for a walk in the neighborhood. (From left) Grandmother, Tarie Townsend, Kinsley, Jamasyn, Kaylie, Treydan, holding Kasyn and mom, Kasie.

Having three infant children is hard enough at any time, but Sonora resident Kasie Hart gave birth to fraternal triplets Kinsley, Kaylie and Kasyn right at the start of the coronavirus pandemic.

With three older children at home, Hart, 36, and her partner, Matt Burris, 39, initially had an "imaginary plan" on how to manage a family that would nearly double in size. Almost as soon as the triplets arrived though, COVID-19 shattered that plan.

"Whenever I was pregnant before, friends and family and local people were volunteering to come help. That all kind of changed when COVID hit,” Hart said. “It was more of a change mentally to plan on doing stuff on my own. They were more worried about getting the babies sick, so they kind of stayed away.”

The triplets celebrated their first birthday on Wednesday. Under typical circumstances it would have been a moment of celebration, guests and pageantry, but the triplets weren't able to have the birthday party they deserved, Hart said.

Hart, who attended Sonora Elementary School and Sonora High School, found out she was pregnant with triplets at Adventist Health Sonora while in the first trimester and referred to a doctor in Modesto.

After the first visit, she called her mother crying and said, "There are three of them."

"It was definitely exciting, even though at the same time it was more than we expected,” she said. “It was exciting because it was new and we never experienced it before. Everything was new, from the pregnancy to the parenting to the birth.”

Hart was later referred to a hospital in San Francisco due to the high risks involved with a triple pregnancy, and many of the medical professionals cautioned her about the dangers inherent in it. A change in her health insurance moved her again to UC Davis Medical Center in Sacramento.

Being pregnant with triplets only magnified the concerns of Hart's mother, Tarie Townsend, 63. Being far from a hospital always lingered in the back of her mind, Townsend said, and she described it as a very stressful time.

In December 2019, the triplets had health scares: doctors discovered a hole in Kinsley's heart and fluid in Kasyn's brain. On Dec. 30, 2019, Hart was told in Sacramento that a return to Sonora was too risky.

A charity known as the Ronald McDonald House put up Hart and Townsend in Sacramento, while Matt Burris and his parents took care of the three children in Sonora.

Early in the morning on Jan. 6 last year, all three babies were delivered by C-section in 10 minutes with few complications and positive blessings from the medical staff.

The triplets were born premature by almost six weeks, though by most metrics they were in the womb longer than most triplets, the doctors told Hart.

The babies spent the next three weeks at UC Davis Medical Center due to their low birth weights, being connected to feeding tubes and difficulty controlling body temperatures, but they returned home on Jan. 23, just as a strange illness called the coronavirus was making headlines.

Despite the premature birth, Hart said they are "happy and healthy and don't have any health conditions."

In the womb, the babies were first identified as "Babies A, B, and C," and they were birthed in that order. Hart said they initially discussed all three names rhyming, but they decided that they should share a common letter: "K." The triplets are fraternal, meaning they are not identical.

The oldest is Kinsley Teresa Burris, a girl, born 4 pounds, 12 ounces and 15.25 inches long, at 6:35 a.m. Hart said she was headstrong and curious, the first to sit up and crawl and is currently the only one to have taken steps.

The next was Kaylie Ann Burris, a girl, born 3 pounds, 4 ounces and 16.5 inches long, at 6:37 a.m. Though she's the smallest, the family refers to her as "tiny, but mighty." Hart said she is lovely and cuddly, but is very loud and "likes to be heard."

The youngest of the trio is Kasyn Stephen Burris, a boy, born 4 pounds, 9 ounces and 17.75 inches long, at 6:40 a.m. He's grown into the biggest of three, and though he has a "chill" attitude and likes to "go with the flow," he likes to be around and close to his sisters, Hart said.

Raising the trio can be stressful at times, and Hart said she sometimes feels as if she was being "pulled in multiple different directions."

Hart’s 3-year-old also needs attention, and the older kids need a quiet place set up to their homework. Sometimes, their 15-year-old, Treydan Burris, picks up the slack by entertaining 3-year-old, Jamasyn Burris. At the moment, Hart said she's appreciating distance learning because she has Treydan Burris home to help.

"They've been so awesome,” she said. “It would have been a totally different story if they weren't here.”

Since her pregnancy, Hart left her job as an administrator overseeing the Adventist Health Sonora rural health clinic on Forest Road in Sonora, but taking care of the triplets has morphed into its own kind of full-time occupation.

"This job has been really challenging, and she's the calmest, most patient person," Townsend said. "She's just been working very hard and taking everything with her family."

"Matt has done a great job working every day,” Hart said of her husband. “He jumps right in and does dad duty and helps with everything that needs to be done.”

Though there are financial struggles inherent with only one working parent, the family is maintaining a positive perspective and focusing on the now rather than the later.

"I don't think it will affect them long term so much, but I do feel like they miss out on little things like being social or experiencing the world as a 1-year-old and stuff like that," Hart said. "I try not to look that far in the future. We just try to take it day by day and enjoy the moment."

All the members of their close family live in Sonora, but still, the isolation inherent to the COVID-19 crisis has presented its own challenges for their closeness to the children.

"We haven't been able to see anybody,” Townsend said. “Nobody has been over to see the babies.”

Townsend and her husband both contracted COVID-19 in November and were quarantined, unable to help during that time.

Often helping out the family is Townsend and her husband, Kevin, who is also 63. There is also Burris' mother and step-father, Kara and Anthony Gutierrez, and his father, Lee Burris.

The grandparents don't live with them, but since they all live in Sonora, they're able to contribute to little tasks that are all the more difficult with six kids rolling around: going to the grocery store, taking the kids to school, or picking them up.

"They're always willing to jump in whenever they can,” Hart said. “It's small tasks you don't think are a big deal, but when you throw three babies in the mix and a 3-year-old, going to the store isn't a simple task.

“I've always known it takes a village to raise kids. I feel like a family isn't able to do it without the rest of the village, and now with these kids, it's even more concrete."