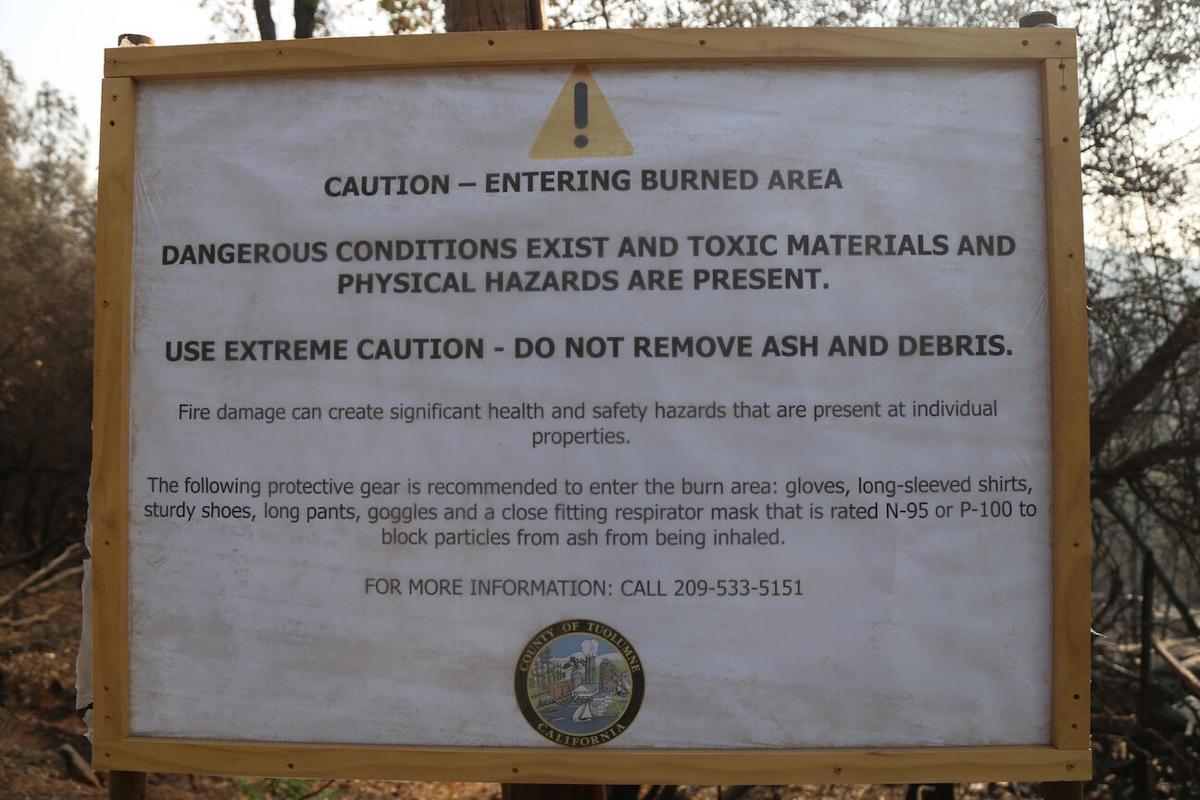 The first significant storm of the autumn-winter season could bring light rain to Sonora and the Washington Fire burn area on Friday. Intense rains on the burn area and toxic debris could unleash flash flooding and erosion onto undamaged properties below, as well as Highway 108 and Stockton Road. 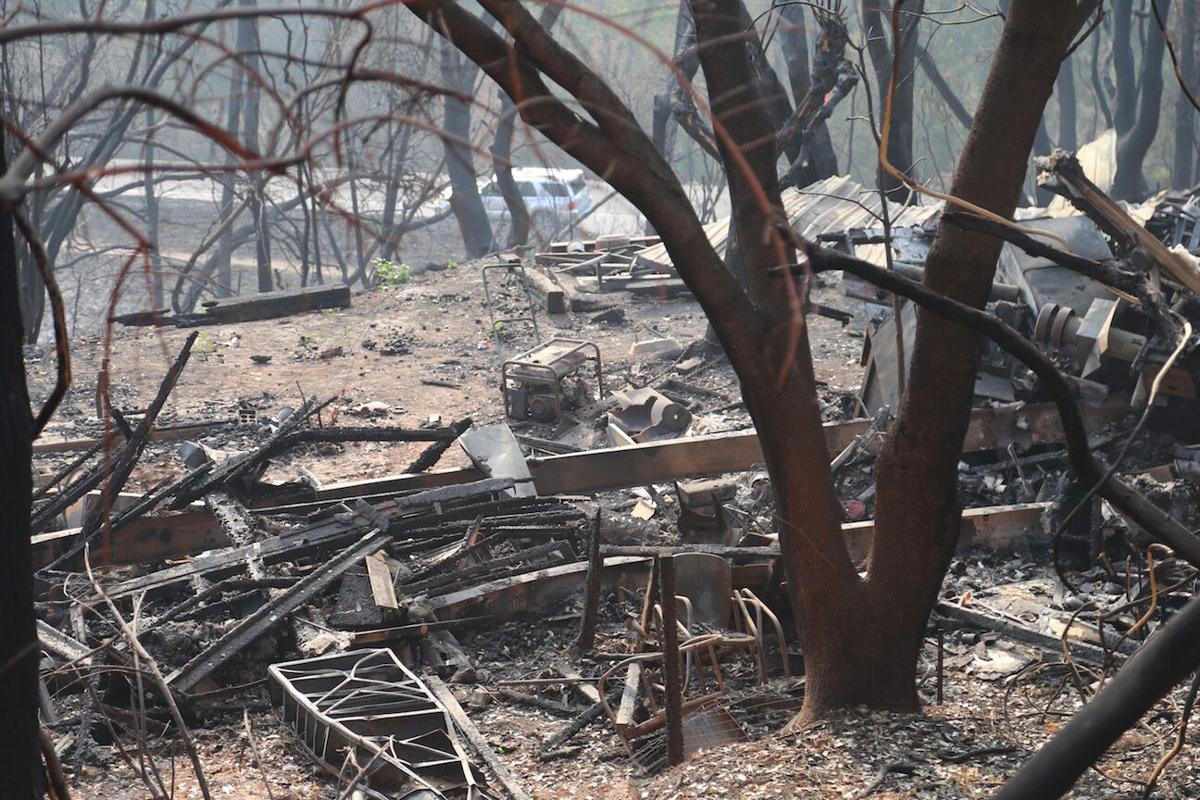 This photo shows part of the Washington Fire burn on Tuesday morning this week. The Tuolumne County Office of Emergency Services and the county Community Development Department are working on a debris flow assessment and potential mitigation plan in anticipation of the rainy season, the county OES coordinator said this week.

The first significant storm of the autumn-winter season could bring light rain to Sonora and the Washington Fire burn area on Friday. Intense rains on the burn area and toxic debris could unleash flash flooding and erosion onto undamaged properties below, as well as Highway 108 and Stockton Road.

This photo shows part of the Washington Fire burn on Tuesday morning this week. The Tuolumne County Office of Emergency Services and the county Community Development Department are working on a debris flow assessment and potential mitigation plan in anticipation of the rainy season, the county OES coordinator said this week.

More than five weeks after the Washington Fire burned a hundred acres and destroyed 19 structures between Sonora and Jamestown, it’s unclear if Tuolumne County has a timetable for implementing post-fire erosion mitigation and control efforts in the steepest, most vulnerable parts of the burn and below it.

What could be the first significant storm of the autumn-winter season could bring light rains to Sonora and the Washington Fire burn area on Friday.

More intense rains on the burn area and the toxic debris left over from structures and vehicles that burned — later this fall and winter — could unleash flash flooding and erosion onto undamaged properties below, as well as Highway 108 and Stockton Road.

Asked Tuesday what Tuolumne County government has done about the post-fire dangers that exist in the Washington Fire burn on the Jamestown side of Highway 108, the county Office of Emergency Services coordinator said county OES and the county Community Development Department are working on a debris flow assessment and potential mitigation plan in anticipation of the rainy season.

Tuolumne County is working with partners at the U.S. Forest Service who have experience with debris flow plans, including the August 2018 Donnell Fire, “to understand potential impacts,” Dore Bietz with county OES said Tuesday.

As of Wednesday, it was not clear who with Tuolumne County government is helping oversee debris removal from properties damaged in the Washington Fire, or whether a target date has been set for having debris removed from all properties in the burn.

Sonora Fire Chief Aimee New said the hillside neighborhood above Stockton, Highway 108 and Golf Links Road, where properties burned in the Washington Fire, is Tuolumne County’s jurisdiction, not the city’s.

Portions of the Washington Fire burn that are east of Stockton, within Sonora city limits, and owned by the city are “being prepped with water bars to deflect water and run-off away from any waterways and to limit the ability of possible mudslides,” New said.

“Once the fire was declared controlled, we're (Cal Fire) only playing a very minor role in it now,” Murphy said Tuesday.

Many properties next to and below the Washington Fire were not damaged by the fire, but they are now vulnerable to runoff and erosion from the burn area when the next big rains hit.

In the burn area along Golden Dove Lane on Tuesday morning, there were red tags on some properties advising people it’s unsafe to enter or occupy the locations due to fire damage and household hazardous materials.

A property owner, Jeremy Caswell, said a man with Cal Fire or Tuolumne County Fire was in the burn area last week who said he was supposed to be looking at erosion potential in the burn.

Lisa Westbrook, spokeswoman for Tuolumne Utilities District, said there is some concern about the burn area above the TUD wastewater treatment facility between Southgate Drive and Highway 108.

“We understand that City of Sonora crews were out there today installing wattles near Southgate Drive, but not near the TUD property,” Lisa Westbrook with TUD said. “From the impacts from the fire, it appears that the slope north of the plant needs some erosion control treatment. The District hopes to coordinate this effort with the City of Sonora soon.”

Scientists with the U.S. Geological Survey say that fast-moving, highly destructive debris flows triggered by intense rainfall are one of the most dangerous post-fire hazards.

The risk of increased runoff and debris flows after fires is due to vegetation loss and soil exposure. Cases of sudden and deadly debris flows are well-documented in the western United States, particularly in Southern California.

Post-fire erosion events, including debris flows, “are a risk to life and property because they can occur with little warning, can exert great impulsive loads on objects in their path, and may strip vegetation, block drainage ways, and damage infrastructure,” USGS states online.

Rainfall intensities as low as 0.3 inch in 30 minutes have triggered debris flows in Southern California. Any storm that has intensities greater than 0.4 inches per hour poses the risk of producing debris flows, according to USGS.

Wildfire-related flooding and increased runoff may continue for several years in a burn area, and potential for debris flows can persist through the first two rainy seasons after a fire. Some of the largest debris-flow events happen during the first post-fire storm season, according to USGS.

Deadly post-fire erosion events in the past 20 years in the Golden State include the Christmas 2003 deaths of 16 children and adults in Waterman Canyon north of San Bernardino in the October 2003 Old Fire burn area. January 2018 postfire debris flows in Montecito, Santa Barbara County, in the December 2017 Thomas Fire burn area, caused at least 21 fatalities, destroyed more than 100 homes, damaged more than 300 other homes, and shut down Highway 101 for nearly two weeks.

California Geological Survey scientists estimated Montecito debris flows had speeds of 10 to 15 miles per hour, were 25 to 30 feet deep, and capable of carrying boulders as large as a tow truck.

The good news for people who live in and below the Washington Fire burn area is the burned watersheds above them are nowhere near as large as the steep burned mountainsides that unleashed ash, mud and boulders and killed people in 2003 and 2018.

Nevertheless, the neighborhood that includes Golden Dove Lane and Silver Pine Drive has enough burned materials in it to pose a significant threat to any properties, drainages, roads, waterways, and other infrastructure situated downhill and downstream from the burn.

Scientists have used streamgages and cameras to monitor burn areas in the past, to try to provide early warnings of post-fire flash floods and debris movement. The USGS has worked with the National Weather Service, National Oceanic and Atmospheric Administration, and other local, state, and national organizations to assess needs for emergency preparedness or early warning systems that can help protect life and property from post-fire erosion events.