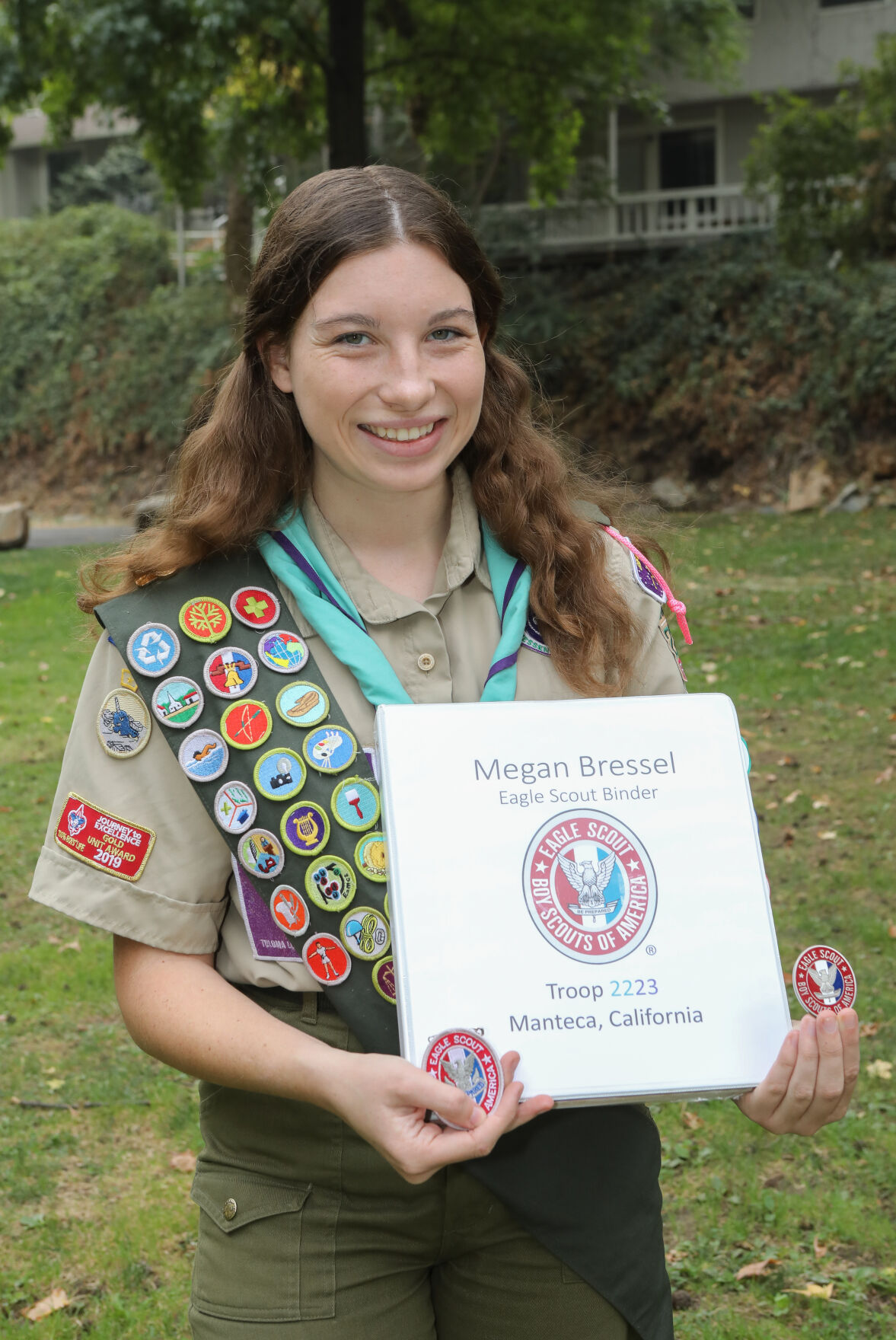 Eagle Scout Megan Bressel is all smiles as she holds her project folder at Rotary Park on Oct. 8. 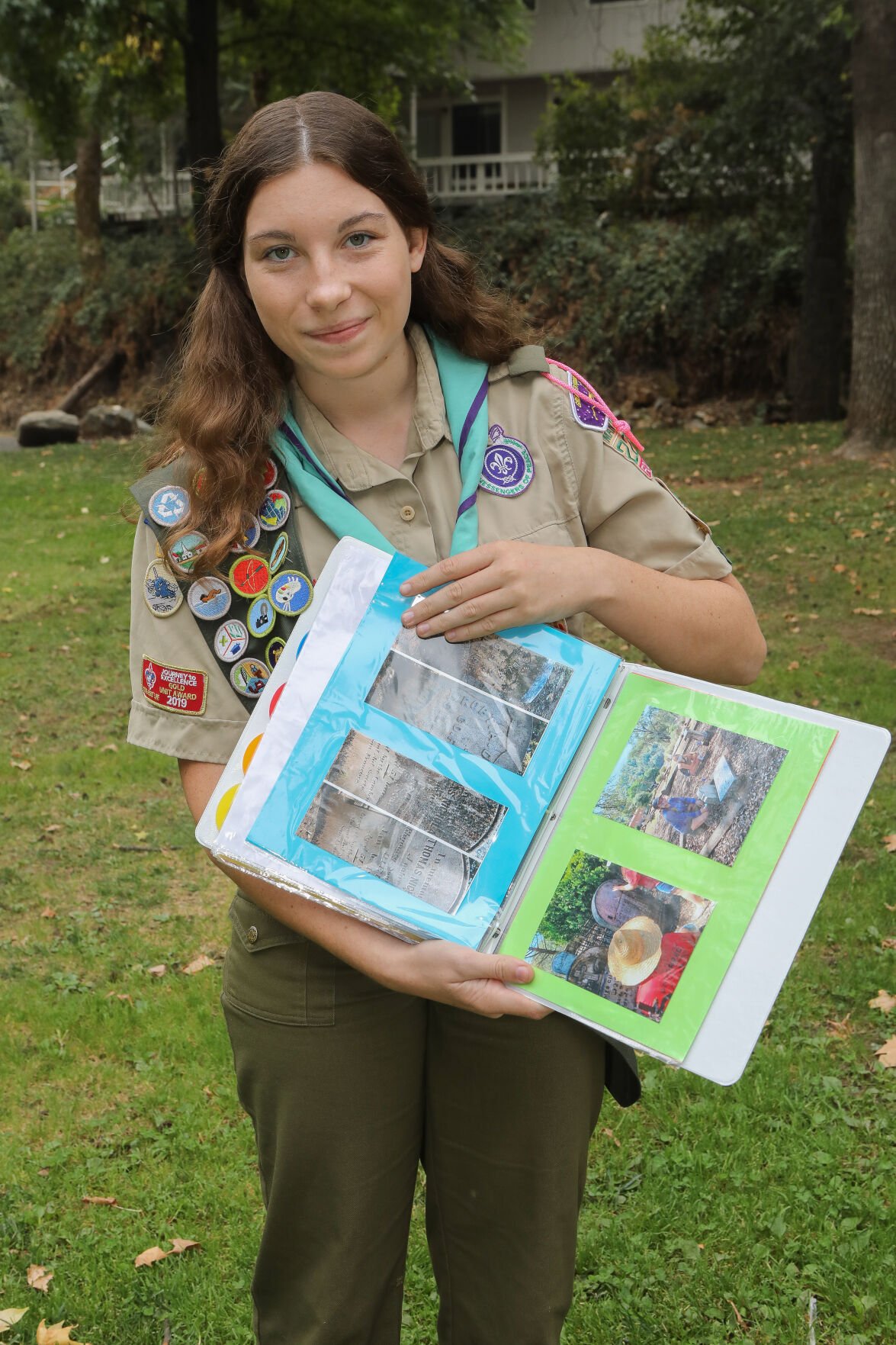 Megan Bressel, 17, of Tuolumne shows photos of her Eagle Scout project at Rotary Park in Sonora on Oct. 9th. 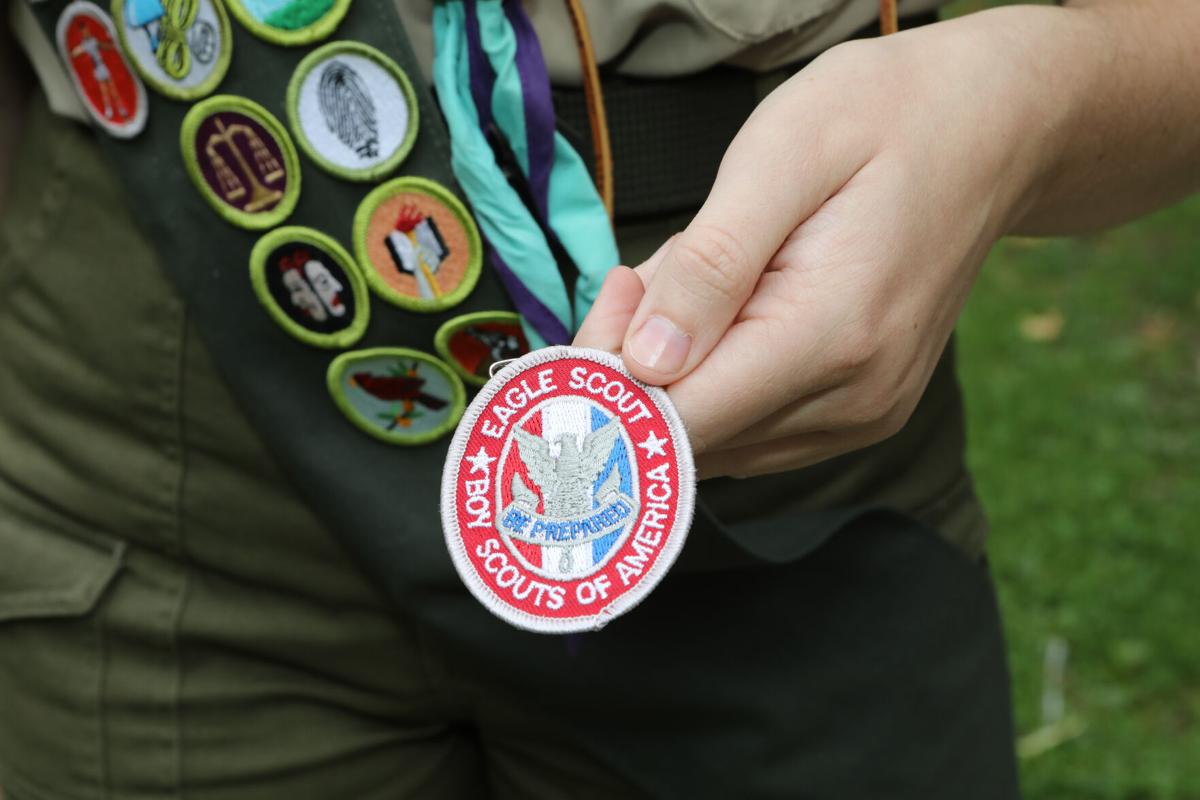 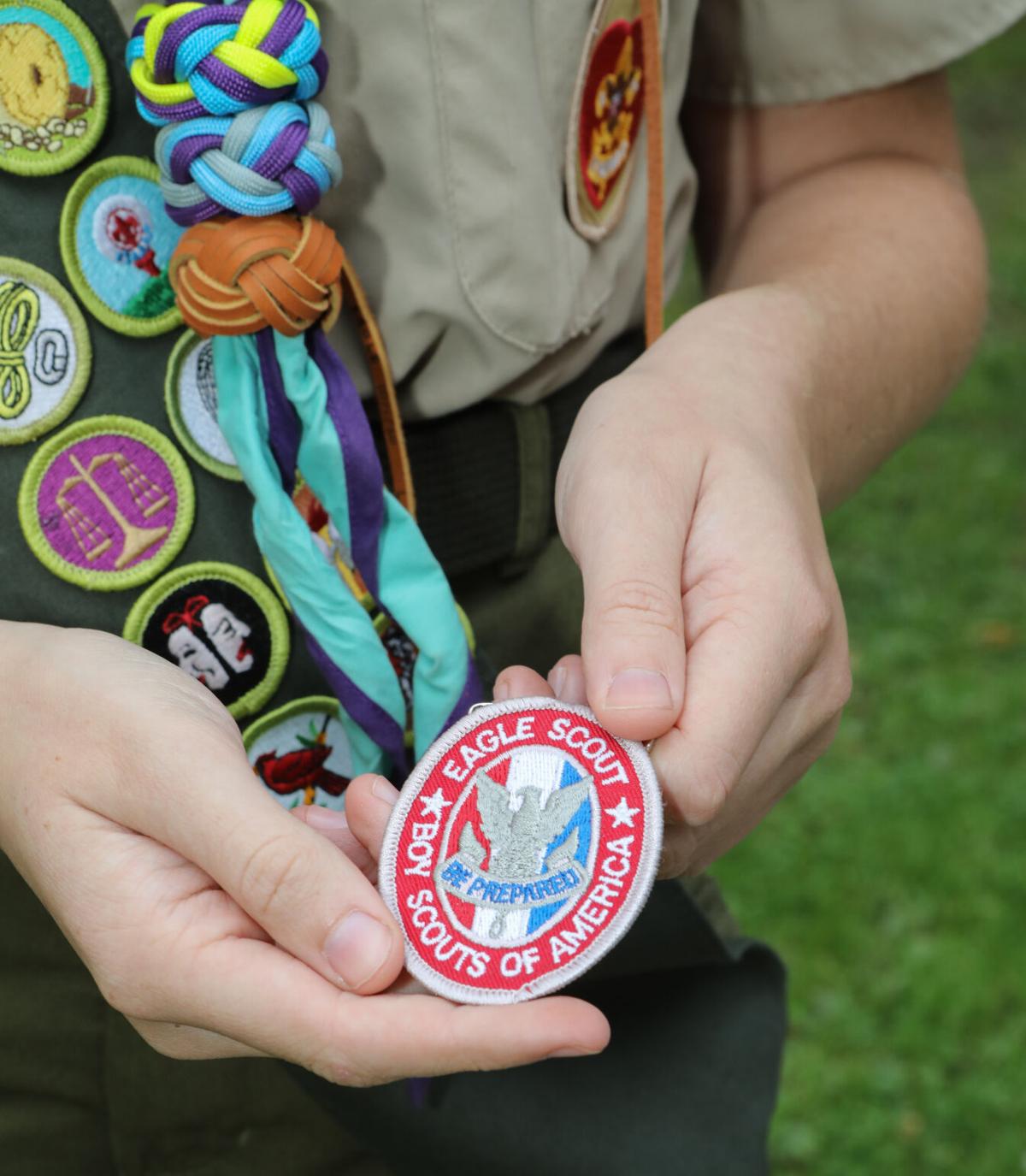 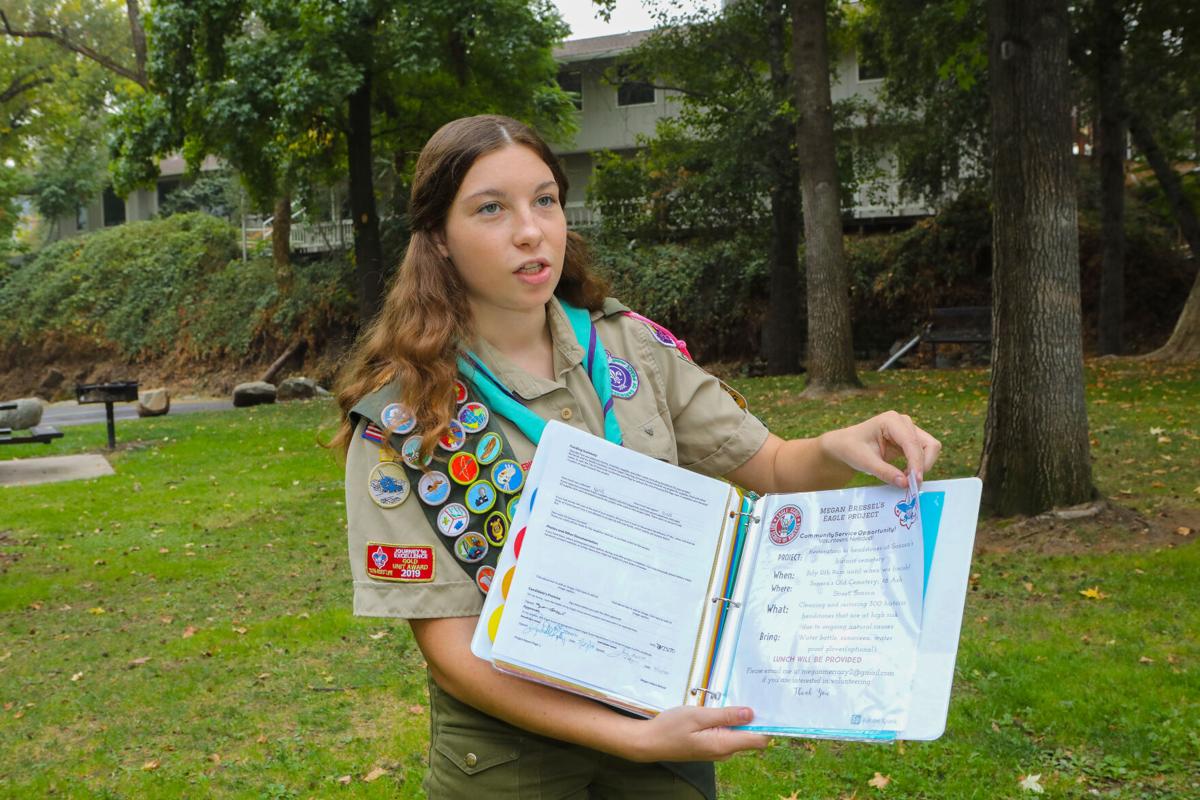 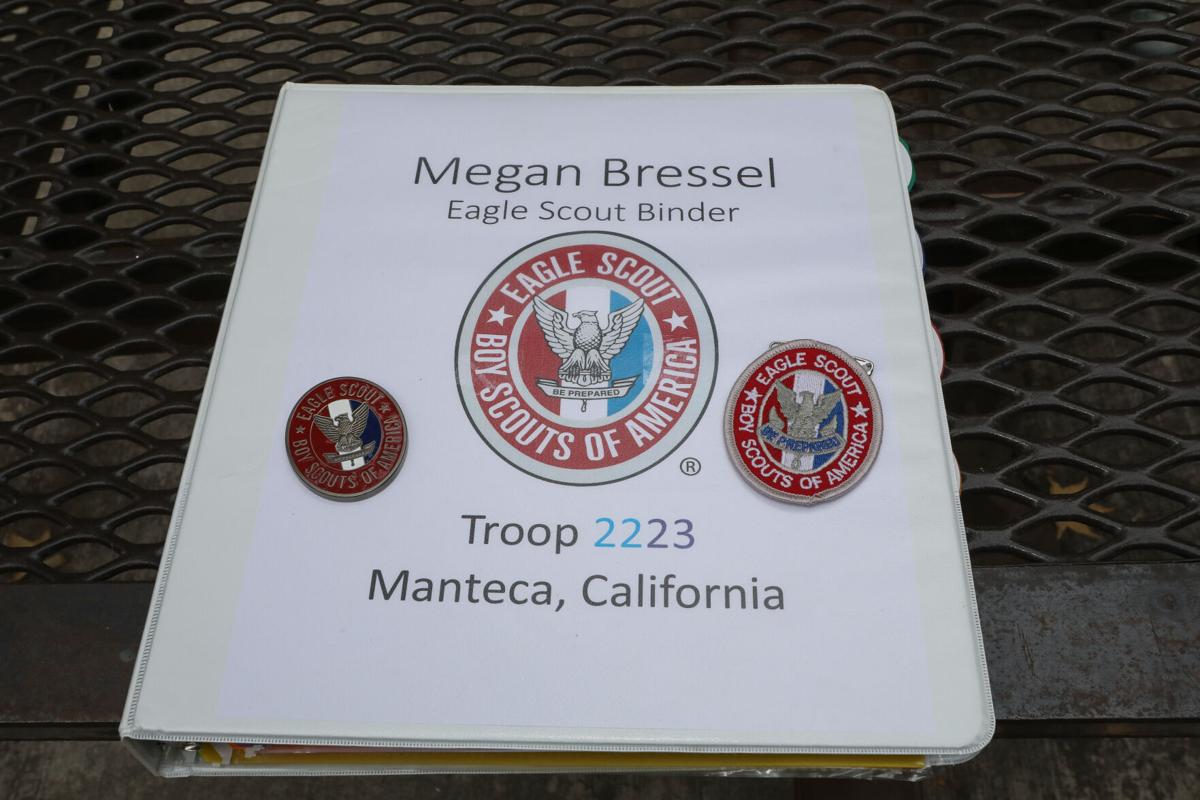 Eagle Scout Megan Bressel is all smiles as she holds her project folder at Rotary Park on Oct. 8.

Megan Bressel, 17, of Tuolumne shows photos of her Eagle Scout project at Rotary Park in Sonora on Oct. 9th.

Megan Bressel, a 17-year-old Summerville High School senior who lives in Tuolumne, made history Oct. 1 when she became one of the nation’s first female Eagle Scouts.

She was one of two candidates that day in Modesto. The pair had to appear before a panel of four adults and share letters of reference and discuss their Eagle projects. No parents or scoutmasters were in the room.

Bressel had a binder with a report in it and photos showing how she led a team of 50 volunteers in July, cleaning and restoring more than 450 historic headstones in 90-degree heat at the Old City Cemetery on Ash Street in Sonora.

She and her co-candidate, Katie Osterhout, of Waterford, answered questions for about 45 minutes. Then the grownups asked them to step out of the room.

A few more minutes later, the Eagle board of review panel invited Bressel and Osterhout back in, this time accompanied by their scoutmasters and their families.

A panel member who is one of the most senior members of the Greater Yosemite Council told Bressel and Osterhout, “What is today? It’s Oct. 1. Today is the first day that females can do their Eagle board of review, and today is the day you two have earned the rank of Eagle Scout.”

Bressel said her scoutmaster, Paul Acosta, gave her an Eagle Scout coin to acknowledge she had just attained the highest rank in scouting.

She said she was overwhelmed and surprised when she stepped outside and found her entire troop had come from Manteca to cheer for her, about 40 scouts and family members altogether.

Bressel has been active in Scouts since she was a Girl Scout at Summerville Elementary from first grade to sixth grade. In October 2018 she learned the Boy Scouts of America would allow girls to join in their own all-girl scouting troops. Her first thought was to figure out if she could make Eagle Scout.

Boys, who can join Boy Scouts as early as age 10, can take seven years to become an Eagle Scout. Bressel had two years to work her way to Eagle.

Nationwide, there will be hundreds of young women who will be part of the inaugural class of female Eagle Scouts when their numbers are tallied a year from now.

Bressel is among a smaller group of candidates who earned the rank of Eagle on their first day of eligibility, the first time in history that girls have been allowed into the formerly all-boys fraternity of Eagle Scouts.

But, Bressel doesn’t have time to rest on her laurels. She is a senior this year at Summerville High’s Connections Visual and Performing Arts Academy and like her classmates, in spite of the coronavirus pandemic, she is busy keeping up with a packed hybrid learning schedule that includes in-person and virtual learning.

Bressel received her Eagle patch Tuesday night from her scoutmaster, Paul Acosta, at a Troop 2223 court of honor in Manteca, in front of about a dozen girls, who are all Scouts, and their families, about 50 people altogether.

Mike Hale, a deputy regional director with the Boy Scouts of America, and interim executive for the Greater Yosemite Council in Modesto, said eight young women in California had passed their Eagle boards of review as of Thursday.

Nationally, there are more than 1,200 young women working toward their Eagle rank, Hale said.

Hale confirmed that Scouts BSA is the program for young men and women ages 11 to 18, and that is the program in which Bressel has attained the rank of Eagle Scout.

Bressel said what happens next is waiting to receive her Eagle certificate, credentials and other paperwork from the national offices of Scouts BSA and the Boy Scouts of America in Irving, Texas. She’s been told to expect her certificate and credentials sometime in November.

There will be another ceremony here in Tuolumne County, called an Eagle court of honor, during which Bressel will be awarded her Eagle Scout badge and Eagle Scout medal.

People who Bressel worked with on her Eagle project at the Old City Cemetery in Sonora will be invited to the ceremony. They will get to see Bressel have her badge and medal pinned on her uniform.

Bressel and Osterhout were singled out in a statement distributed last week by Hale titled and packaged “Inaugural Eagle Press Release.”

When the Boy Scouts of America opened the Scouts BSA program to girls, Bressel knew she had a once-in-a-lifetime chance to work hard and challenge herself in a scouting program, she said in the statement.

“I’ve had more outdoor adventures, leadership opportunities and personal connections than I expected,” Bressel said. “The highlight has definitely been restoring the historical headstones for my Eagle Project. It was my honor to give back to my community.”

Bressel said she plans to graduate from Summerville High’s Connections Visual and Performing Arts Academy, attend a four-year university, and continue in scouting in the Venturing program and the Order of the Arrow.

“Earning the rank of Eagle Scout takes hard work and perseverance, and we are honored to recognize Megan and Katie for this significant accomplishment,” Bob French, president for the Greater Yosemite Council in Modesto, said in the statement. “Along the journey to Eagle Scout, young people gain new skills, learn to overcome obstacles and demonstrate leadership among their peers and in their communities. These benefits are invaluable for everyone, and we are thrilled that they are now available to even more youth.”

Young women have been part of scouting for decades in programs offered by the Boy Scouts of America, including Sea Scouts, Venturing, Exploring and STEM Scouts. Boy Scouts of America expanded access for girls to scouting in recent years by welcoming girls into Cub Scouts and into Scouts BSA last February.

Since then, according to Hale and the Boy Scouts of America, tens of thousands of young women across the nation have joined Scouts BSA and many of them are working their way toward the rank of Eagle Scout.