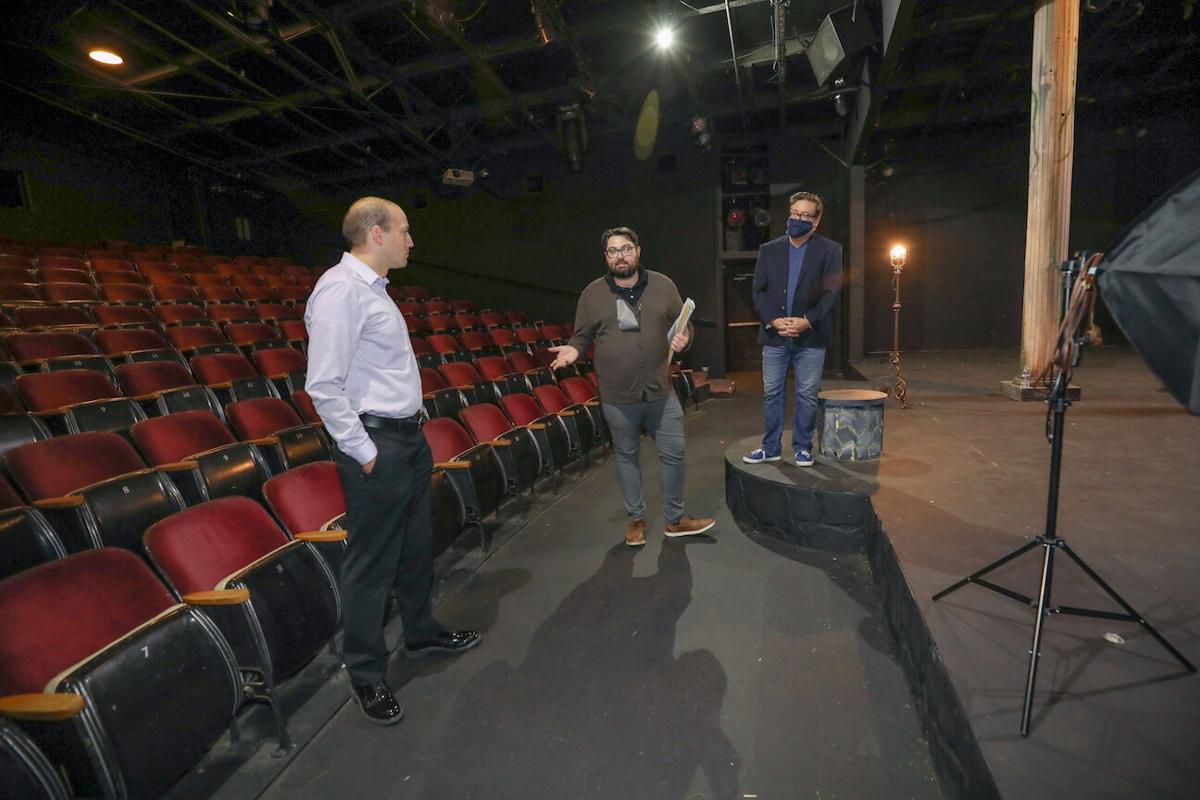 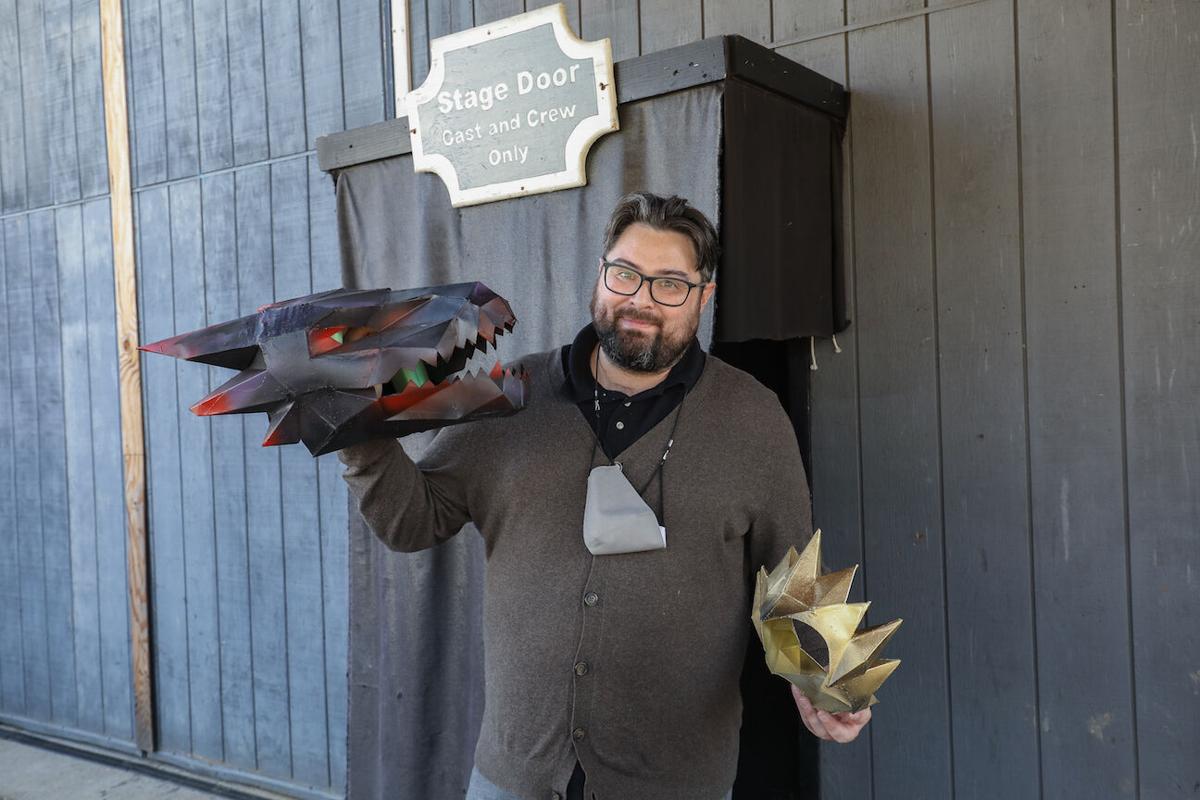 Marketing Director of Sierra Repertory Theatre Jerry Lee holds a dragon head and a crown from the theatre's production, The Sword and The Stone in front of the stage door at the theatre on Oct. 21. 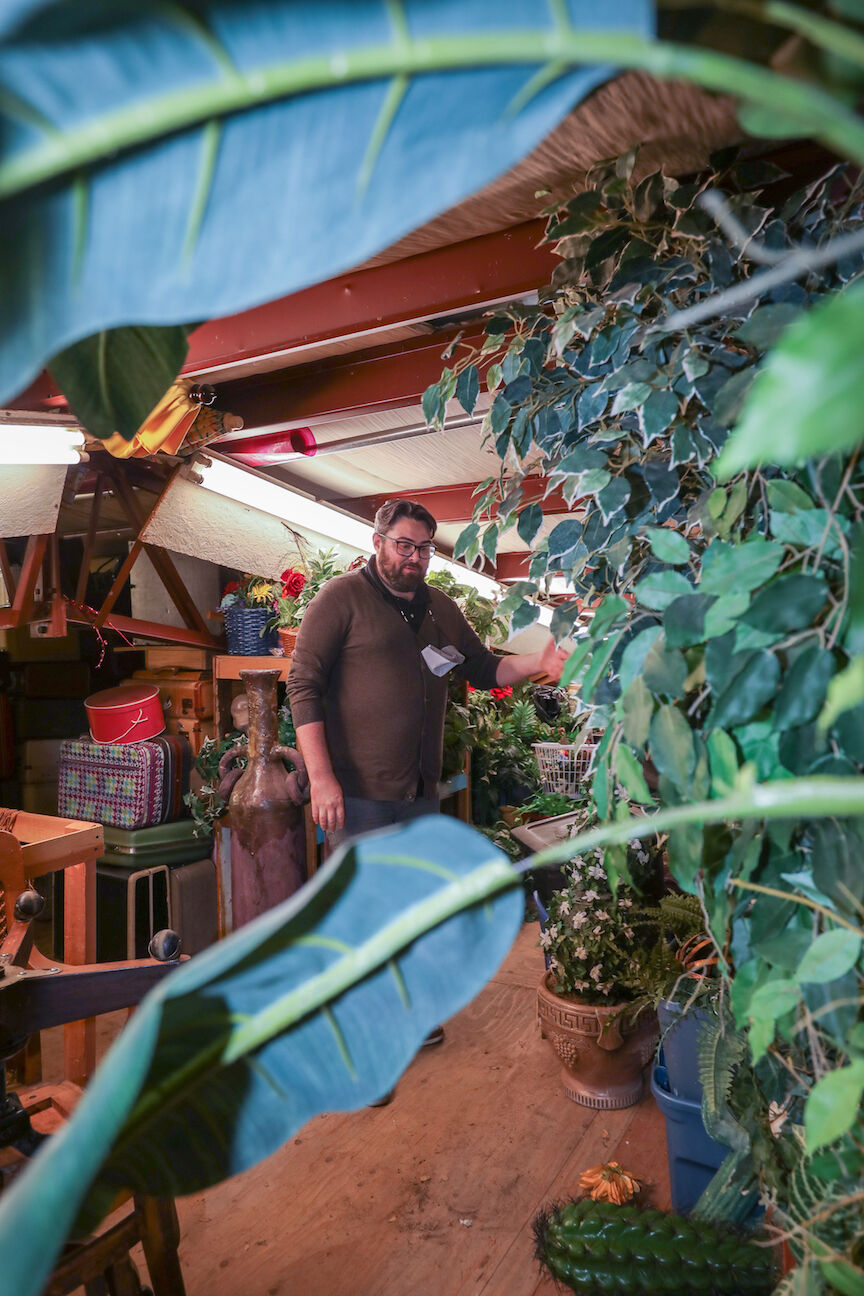 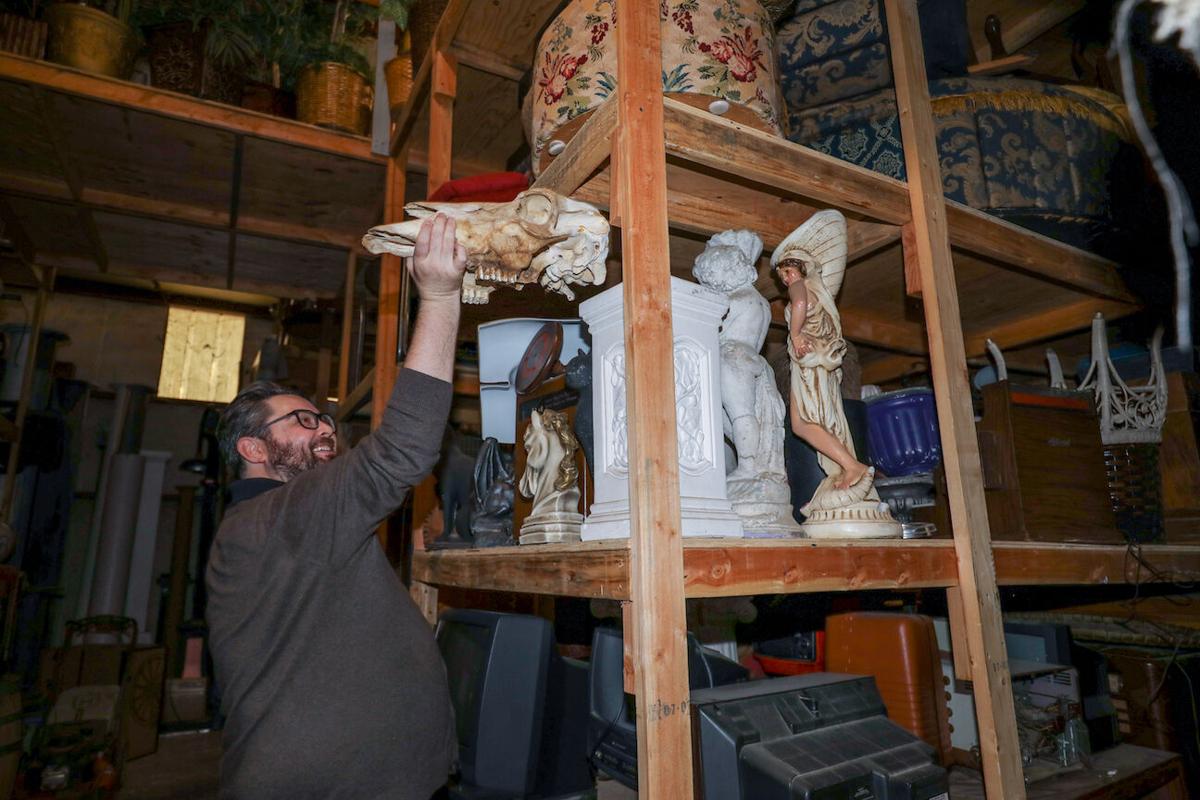 Marketing Director of Sierra Repertory Theatre Jerry Lee pulls a skull of the shelf in the prop and scenic shop, one of many items left over from the many plays at the theatre.

Marketing Director of Sierra Repertory Theatre Jerry Lee holds a dragon head and a crown from the theatre's production, The Sword and The Stone in front of the stage door at the theatre on Oct. 21.

Marketing Director of Sierra Repertory Theatre Jerry Lee pulls a skull of the shelf in the prop and scenic shop, one of many items left over from the many plays at the theatre.

It was the year of Sierra Repertory Theatre's 40th anniversary, but even the premier Tuolumne County theater company based in East Sonora could not ignore the safety risks posed by the COVID-19 pandemic.

Like so many other county businesses, entertainment or otherwise, they were forced to close their doors. As the crisis deepened, they ultimately canceled the majority of their 2020 season.

But, Managing Director Jeremy Blunt said a small group of administrative staff were busy over the last seven months, whether it was installing refurbishments, maintaining youth arts education services or plotting their anticipated 2021 return.

"We have one foot in the now, dealing with the pandemic and not being able to be open and, of course, we still have core costs," Blunt said. "We're also having one foot in the future. We are balancing both tasks."

In March, when words like "global pandemic” and “shelter-in-place" were first being discussed, the administrative staff knew they needed to act fast.

They were already a few weeks into their public production of “Camelot,” with four weeks to go. Their next show, “Church Basement Ladies,” had completed its first week of rehearsal, with sets, costumes and technologies already built and designed.

"It really was an emotional time for all these shows. There is so much love and commitment that goes into it," Blunt said, "but COVID was starting to really pick up and spread around the country, so it was something we had to do, but it was still a very tough decision."

Twenty-two full-time and part-time production staff, which includes resident designers, stitchers, painters, set-builders and box office staff, were temporarily but indefinitely furloughed. (They were already paid for their work on both unfinished productions.)

The actors on “Camelot” were paid through the end of theIR contracts and for the first few weeks of “Church Basement Ladies,” which did not make its public release date.

"The shelter-in-place hadn't been mandated here yet, but we have actors from all over the country, and we knew we had to get them home," said Producing Artistic Director Scott Viets.

At this time, SRT retains only six full-time employees, which includes the four administrative staff and two shop maintenance men.

Shows are canceled through the end of the year, and they are anticipating making an announcement about their next season within five to six weeks.

'We are trying to wait it out," Viets said. "Broadway is shut down until May 31st. That's kind of a guideline for us as well."

A blueprint for the anticipated reopening is in development, but not yet in its final stages. The  administrative team is monitoring local and state mandates in the development of the plan and is purchasing personal protective equipment like masks, face shields and plexiglass dividers. They work closely with theatrical unions who will be verifying and reviewing safety plans to make sure they are in accordance with other theaters around the country who are planning their own reopenings.

"A lot of that is being worked out right now,” Blunt said. “There will be a plan in place.”

Associate Artistic Director Jerry Lee added, "We don't want to set a return date yet and have the public be disappointed yet again by something out of our control."

In the interim closure period, the administrative staff has turned toward rejuvenating and refurbishing their theater site in anticipation of a COVID-controlled reopening.

"For the first time in 40 years, a theater company that has run from January through December has this luxury of opportunity to pull back the curtain and say we can fix this, we can fix that," Viets said.

The two main refurbishment projects were the HVAC system in the East Sonora theater and renewing the lighting scaffolding that hangs above the stage and audience.

Viets said the rotting shed which held the HVAC system was removed and rebuilt (the filtering system was ensured to be COVID compliant) and the many-decades-old wooden planks holding the lights were torn down and replaced with steel, which could last up to 40 years.

Additionally, the local grounds were spruced up by a local community group, the Tuolumne County Garden Club, in anticipation of some events or intermissions being held outside.

"We're streamlining every department, every office every facet of this theater company so we could just be more efficient," Lee said.

"The arts are so vital in a child's education,” Blunt said. “We felt during this time, we were able to serve our students with workshops so they could learn and grow in their craft.”

SRT provided some scholarships to students who could not afford to participate and offered virtual master classes led by professional actors for students under 18.

The SRT junior students produced a version of “The Sword and the Stone,” which was provided to area schools free of charge, Blunt said.

The educational projects were paid through a $20,000 grant from the Mary Stuart Rogers Foundation and the refurbishment projects through donations from the board of directors.

"We've really been just scraping by with just the generosity of the board to get us by with this, Viets said. "All the unknown and what-if scenarios."

The Fallon House in Columbia State Historic Park was acquired by SRT in 1998 and functions as a "second stage" for its many productions.

"One does not take precedence over the other," Viets said. "There's not a bad seat in either house."

Though they are the predominant theater left in Tuolumne County after the dissolution of Stage 3 Theatre Co., they noted MYACT is another production company in the area.

Despite their efforts during the closure, they added, funds remain limited. Three-quarters of their income is from ticket sales, Viets said, with 65 to 70 percent of patrons coming from out of the county.

They said the total 40,000 to 50,000 patrons who attend SRT shows each year inject approximately $3 million into the local economy, based on a June 2018 estimate.

"This is a destination theater," Blunt said. "The impact this theater has is incredible."

SRT has set up an Endurance Fund to fundraise $30,000 to pay for ongoing core costs, such as rent and utilities.

"We knew we were in a marathon here to get through this, so we thought about the Endurance Fund," Blunt said. "We thought that was a great visual of what we are going through."

It's been two weeks since the announcement, and the fund has raised $16,400, Blunt said.

Additional donations will be matched dollar for dollar by the board, and the fundraising will last until Dec. 20.

"It wasn't an option to simply shut everything down," Viets said. "We knew to be able to survive this, we needed to be proactive, we needed to fundraise. We're grateful for the gifts we've gotten so we can stay here."