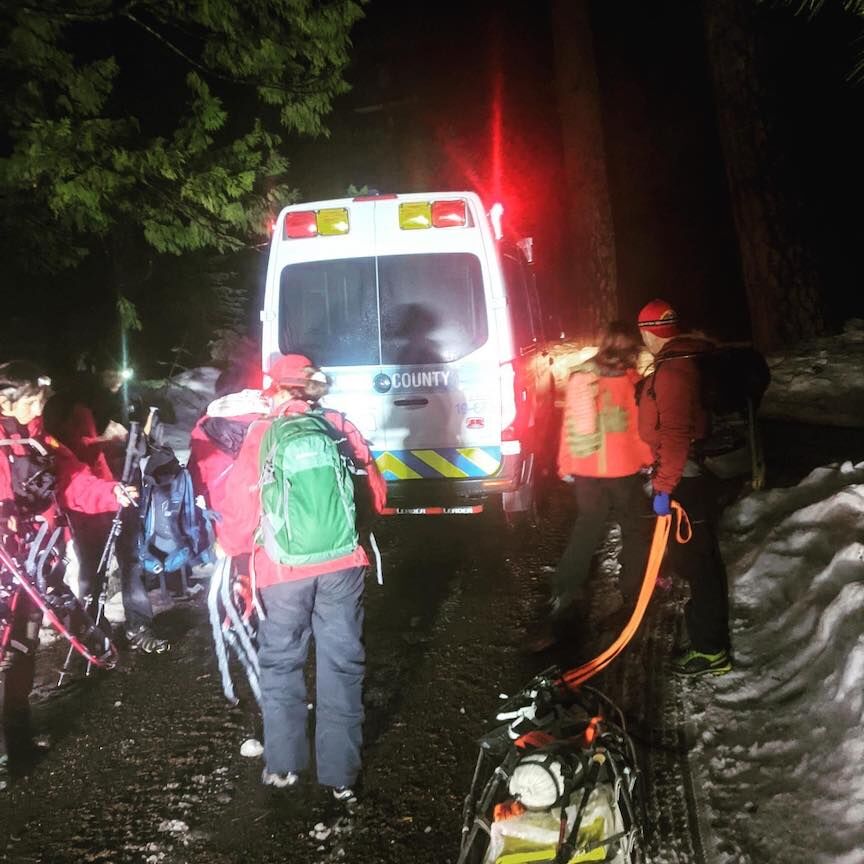 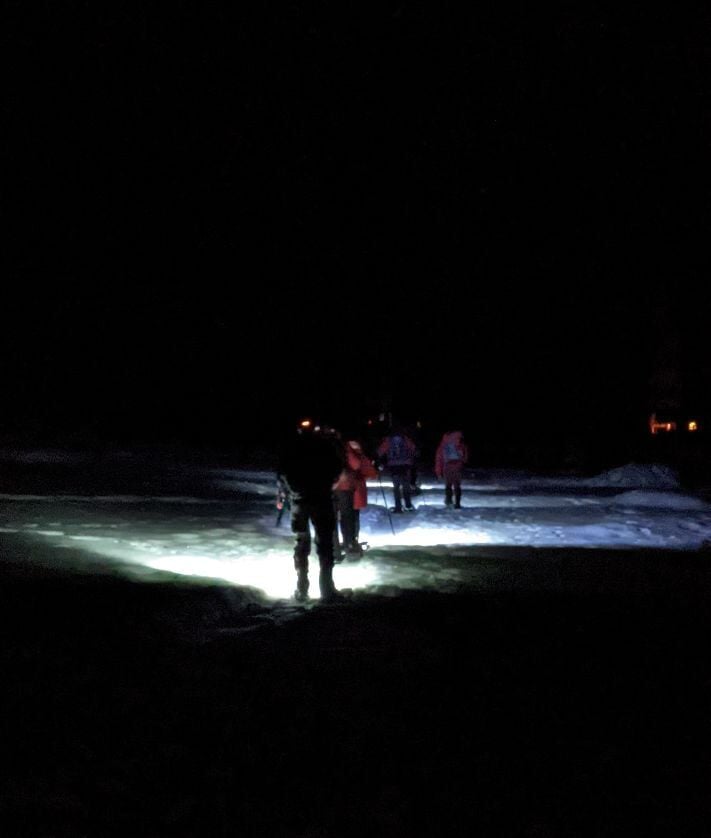 It took members of the Tuolumne County Sheriff's Search-and-Rescue Team about 90 minutes in the dark to reach a pair of hikers Monday night who got stranded in frigid weather on the east end of Pinecrest Reservoir.

It took members of the Tuolumne County Sheriff's Search-and-Rescue Team about 90 minutes in the dark to reach a pair of hikers Monday night who got stranded in frigid weather on the east end of Pinecrest Reservoir.

Volunteer firefighters from Pinecrest Station 55 and Tuolumne County Sheriff’s search-and-rescue personnel did another rescue Monday night at Pinecrest Reservoir, where two people went hiking in the snow, one fell into water, and the two took refuge at a cabin and called for help.

It was the second rescue of visitors who were under-prepared for winter conditions at Pinecrest in 10 days. Three adults without proper winter gear were rescued Feb. 6 from a location near the South Fork Stanislaus River inlet on the east end of the reservoir.

In the most recent incident, two stranded hikers called 911 for help and Station 55 got notified at 6:35 p.m. Monday. The two hikers were out walking around the lake for four hours. One of the hikers fell in the water.

It got dark. The two hikers were in wet clothes, it was freezing cold, and they were exhausted. They were still out on the east side of the reservoir. The two hikers took shelter at a cabin and called for help, Tuolumne County Fire Department staff said in a social media post.

Volunteer firefighters took extra clothes, extra snowshoes, and gear to warm the stranded hikers. It took about 90 minutes to reach them.

Members of the Sheriff’s Search-and-Rescue Team were called out to help transport. They brought rescue backboard baskets called litters that can be used to carry patients. The volunteer firefighters and search-and-rescue personnel gave the stranded hikers dry clothes and snowshoes, evaluated them for hypothermia and other cold-related illness, and walked them out about a mile and a half to a waiting ambulance.

Paramedics did more evaluation of the rescued hikers while they warmed up in the back of the ambulance. The two people, who were not identified, were eventually released with no medical issues, Tuolumne County Fire Department staff said. They were able to make their way home without further medical assistance, search-and-rescue staff said.

The two people who were rescued Monday night were “a little better prepared for the cold weather and 3 to 5 feet of snow” than the three people who required rescue 10 days earlier, Tuolumne County Fire Department staff said, but they did not have all the necessary equipment.

Hiking near the water and falling in the water created “a life-threatening scenario” and without help from first responders and search-and-rescue, the Monday night rescue could have ended differently, Tuolumne County Fire Department staff said.

Pinecrest Station 55 is staffed by volunteer firefighters in cooperation with the Pinecrest Permittees Association. If they were not on call at the station, the next nearest fire responders would come from Mi-Wuk Sugar Pine Fire Protection District about 30 minutes away.

One of the Sheriff’s Search-and-Rescue newest volunteers, Brendan Danicourt, left his own birthday party when he received the callout for the Pinecrest rescue Monday night.

“Brendan has been doing some great work with SAR and his dedication is appreciated by everyone on the team,” the Sheriff’s Search-and-Rescue Team said in a social media post.

Last week, in their account of the Feb. 6 rescue at Pinecrest, Tuolumne County Fire staff advised visitors that when you’re in the backcountry or the high country any time of year, wear the appropriate gear and prepare for the worst-case scenario.

In addition, visitors to the outdoors should always ensure you travel together, and let other people know where you’re headed and when you expect to be back.

Tuolumne County Fire staff also reminded people the specialized equipment rescuers and other first-responders use in alpine winter conditions — like winter rescue gear and all-weather response vehicles — all cost money to purchase, test and maintain. In other words, rescues do not occur without significant costs.

It was not clear from county fire and sheriff’s SAR accounts of both rescues, Feb. 6 and Monday night, whether the rescued people will be charged for the help they received. Identities of the rescued individuals in both incidents were not released.