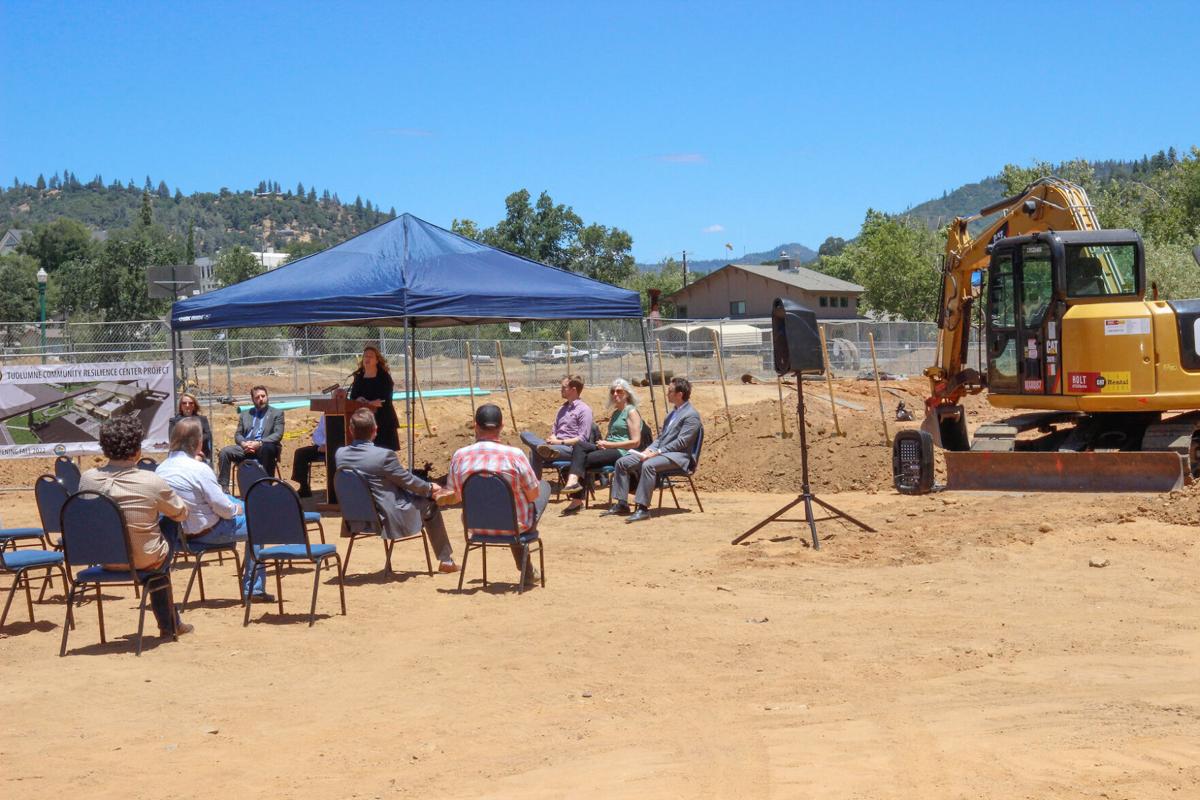 Deputy County Administrator Maureen Frank addresses the crowd at the ground breakingceremony for the Tuolumne Community Resilience Center project on Bay Street in Tuolumne on Tuesday. 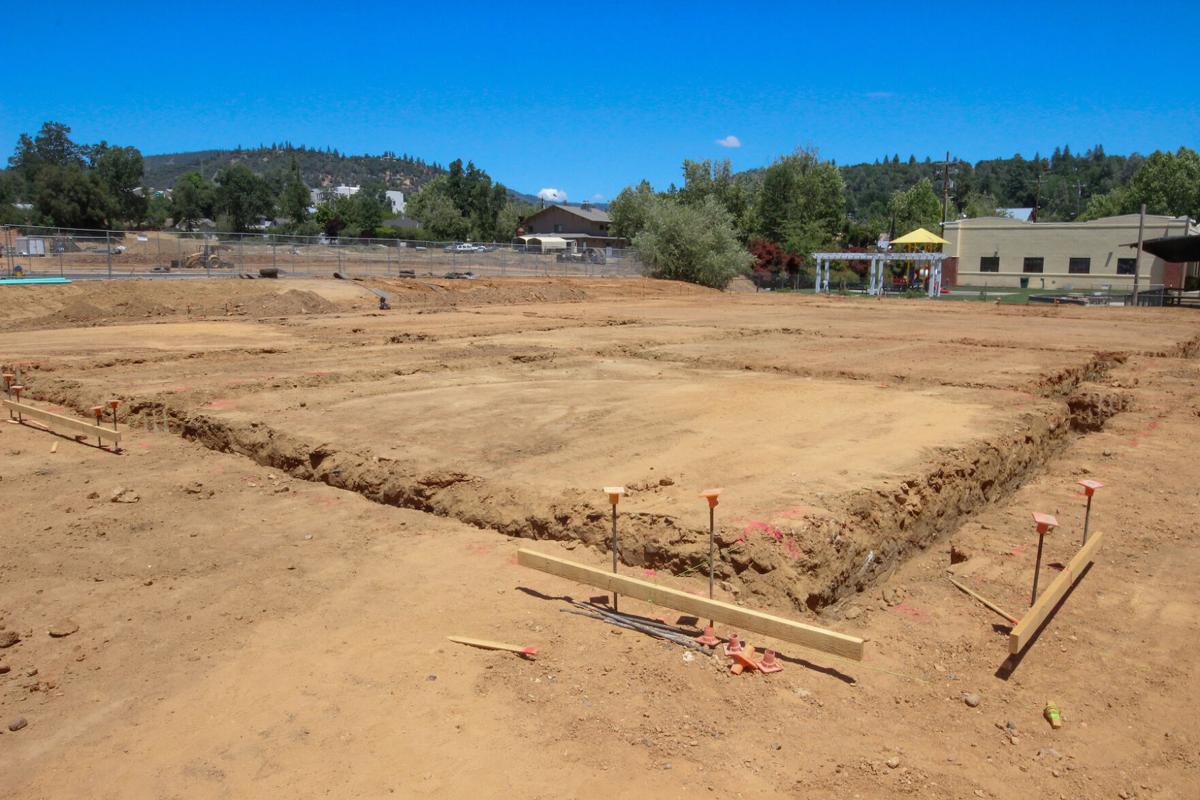 Trenches are in place for the foundation to be laid for the Tuolumne Community Resilience Center project on Bay Street in Tuolumne.

Deputy County Administrator Maureen Frank addresses the crowd at the ground breakingceremony for the Tuolumne Community Resilience Center project on Bay Street in Tuolumne on Tuesday.

Trenches are in place for the foundation to be laid for the Tuolumne Community Resilience Center project on Bay Street in Tuolumne.

Tuolumne County Supervisor Ryan Campbell recalled the devastation of the 2013 Rim Fire and the importance of new projects such as the community resilience center in Tuolumne in a speech Tuesday afternoon at a ceremonial groundbreaking for the federal grant funded project.

"It was burning right over there, right over the ridge where we are standing now," he said. "When you have resilience, you know you can face the challenges and still bounce back from them."

Campbell said the statement emphasized the years of reactionary effort put in by county officials to not only restore the approximately 400 square miles burned by the mega-blaze, at the time the third largest fire in California history.

The construction of the resilience centers, or community sites dedicated to community projects, sheltering and disaster response, reflected a new reality in California, Campbell added, now that the Rim Fire had already slipped to the ninth largest fire in the state’s recorded history.

"It's incredible to see all the community input and community hard work starting to come to fruition as we celebrate the Tuolumne Community Resilience center and next month the Groveland Community Resilience Center," said Deputy County Administrator Maureen Frank, who oversaw the effort to attain a $70 million federal grant that California received in 2016 through the U.S. Department of Housing and Urban Development’s National Disaster Resilience Competition, which funded three separate projects that included the resiliency centers.

Grants from the competition were intended to fund disaster recovery in affected areas and prepare for potential new natural disasters. Tuolumne County was given funding through the state to recover from the Rim Fire and better withstand future catastrophes.

The two resiliency centers, in total, are expected to cost about $25 million to construct.

An official groundbreaking for the center in Groveland will be on July 13, though like the Tuolumne site, work has already begun there.

"I think it's a great opportunity," said Office of Emergency Services Coordinator Dore Bietz. "This is going to be a way and a step for us to prepare for another Rim Fire."

At the county Board of Supervisors meeting on Tuesday prior to the groundbreaking, Frank and other officials provided updates on the ongoing projects, which also includes a biomass energy and wood products manufacturing facility as well as forest restoration and the installation of fuel breaks.

Frank said the restoration of forests, meadows, fences and troughs were mostly completed, with fuel breaks expected to be installed next year. She also said last June the Sierra Nevada Conservancy, the other projects funded by the grant, sought companies who use biomass as a part of their industry and wanted to relocate to Tuolumne County. Three potential businesses were in the loan application process, she said.

The resiliency centers are just one pillar of the project, accounting for about $20 million from the grant. Another $28 million was earmarked for projects to restore forested areas mostly in the Stanislaus National Forest and create fuel breaks, while the remaining $22 million was to develop a biomass energy and wood products manufacturing facility.

During statements on Tuesday, multiple references were made to county and state efforts to bridge a $5 million funding gap for the centers and provide for both sites instead of just one. The money was granted by the state through the federal Neighborhood Stabilization Program, which was intended to help stabilize communities with high rates of abandoned and foreclosed homes as a result of the 2008 economic crash.

According to a sign at the site, the Tuolumne center is set to be finished in the fall of next year.

Both centers will be about 8,775 square feet and contain a lobby area, office space, large gathering room for up to 200 people, commercial kitchen, bathrooms and up to two classrooms. They will also have approximately 200 parking spaces and a “multi-functional outdoor area,” such as a covered picnic area or stage.

County Supervisor David Goldemberg inquired at the meeting as to whether Tuolumne County Arts would be able to use the community for art programs, which was confirmed. It was also noted to him that the biomass facility was granted an additional year extension, so county officials were confident the project would be finished without loss of funding.

Organizations renting the facilities are expected to offset the cost of maintenance and operation, about $45,000 a year. In May, county supervisors approved a contract with the state pledging to maintain and operate them through at least 2027, or pay back the grant funding used for their construction.

The Groveland site plans to host hospitality courses through Columbia College due to its proximity to Yosemite National Park.

The intended multi-uses of the sites vary outside of their primary function as gathering or sheltering places during natural disasters.

Public input specified Groveland as more of a center for gatherings and events and will include an amphitheater.

The Tuolumne site, however, is geared more toward economic stimulation.

"I think true economic development is if you can affect a person," said County Supervisor Anaiah Kirk in a speech at the groundbreaking. "I am really looking forward to seeing how this building can help build the economy in that capacity."