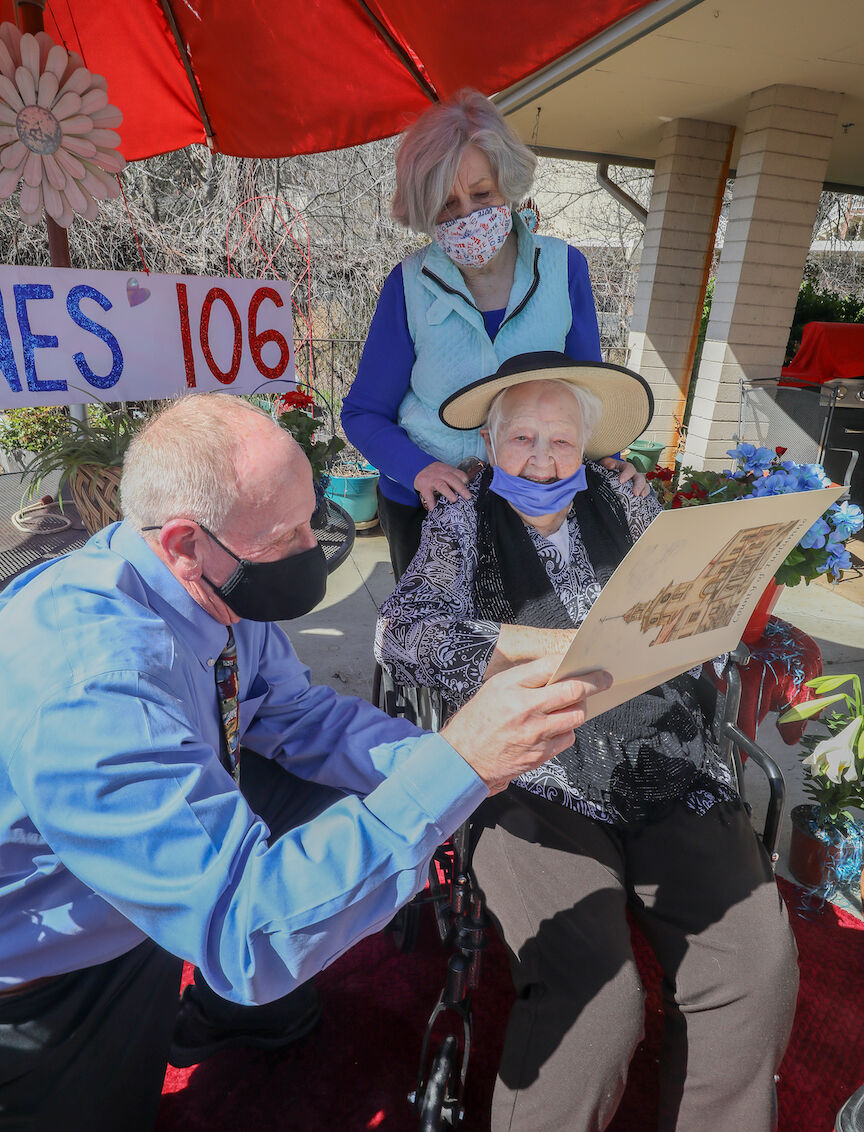 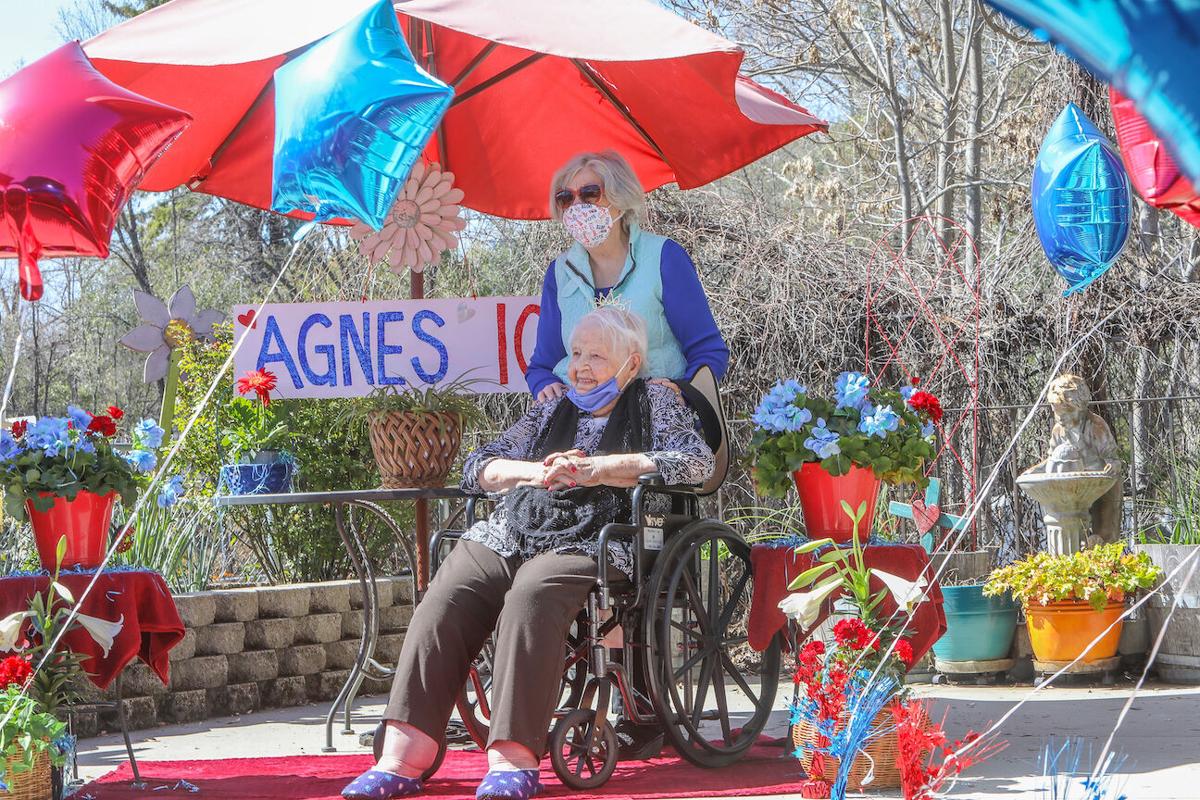 Agatha Christiansen gets the red carpet treatment for reaching the age of 106 and is all smiles as she looks over to everyone helping her celebrate with her daughter, Patti Cherry, of Sonora standing by her side. 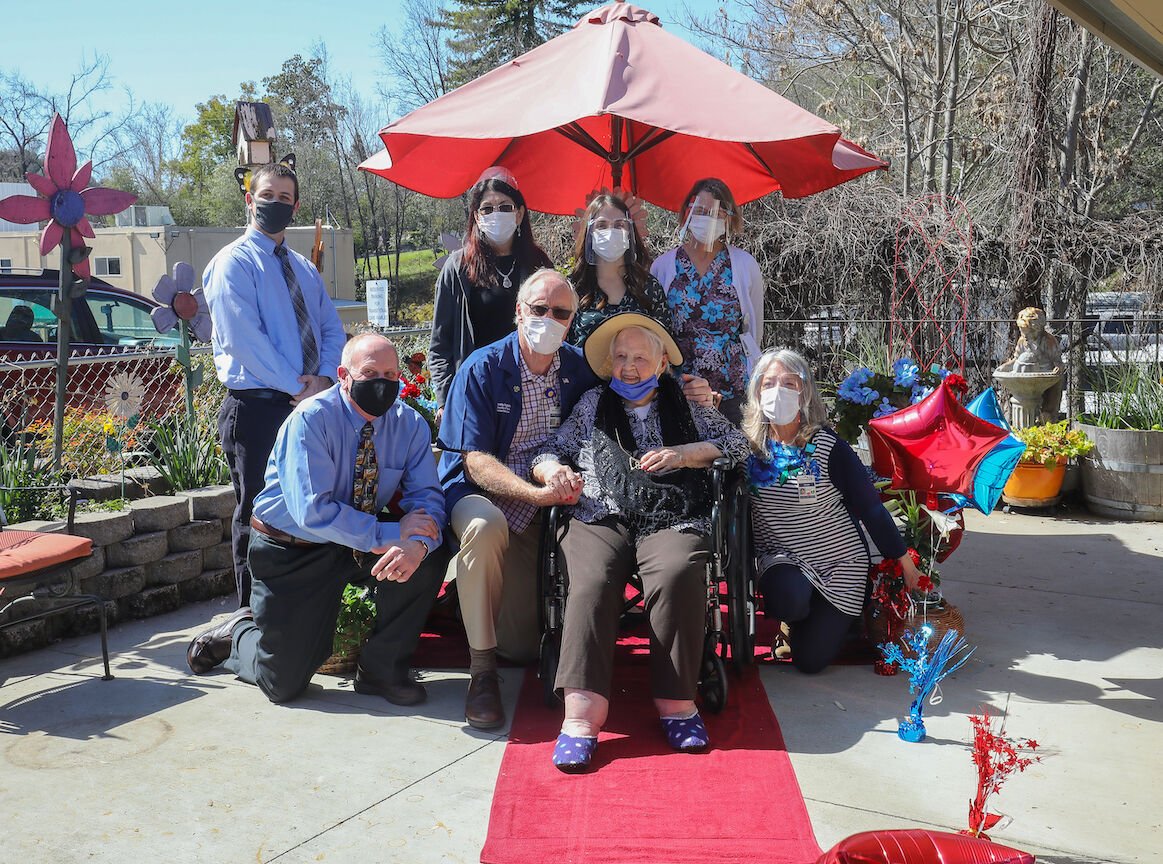 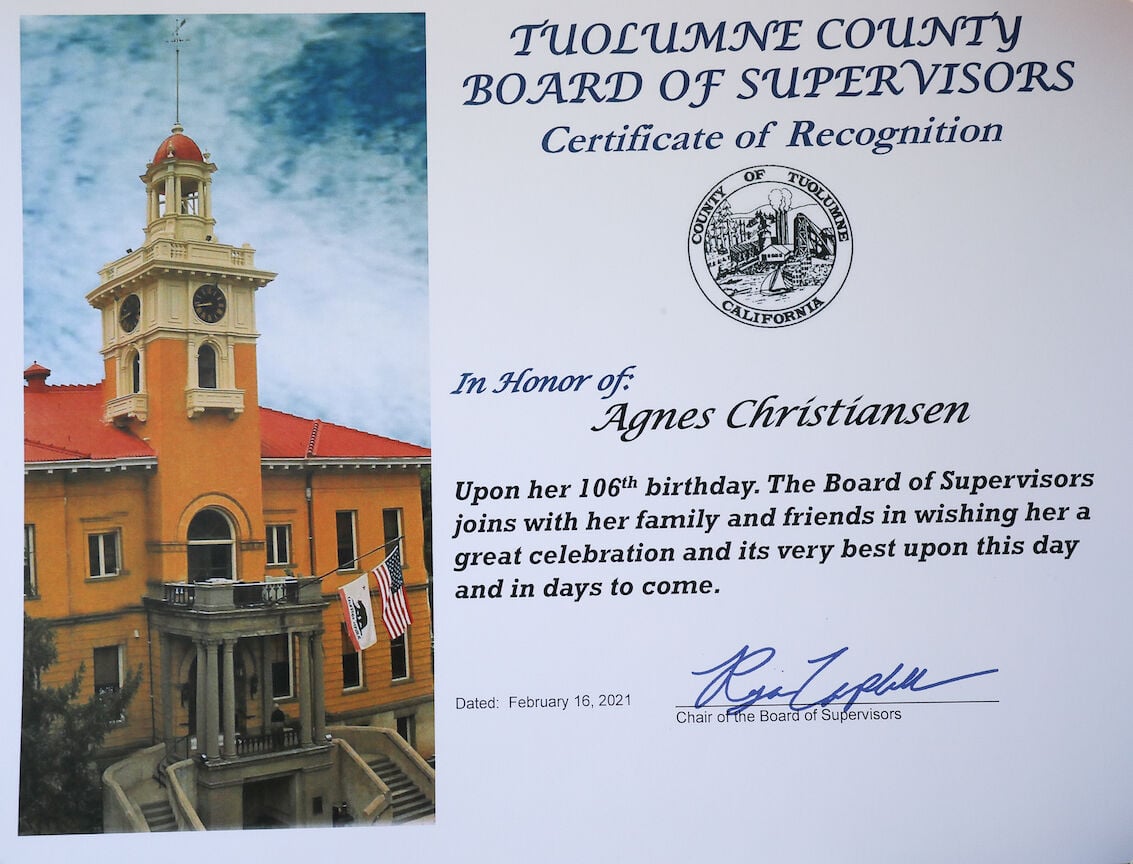 The Tuolumne County Board of Supervisors issued this certificate of recognition to Agatha Christiansen for her one hundred and sixth birthday on Monday.

Agatha Christiansen gets the red carpet treatment for reaching the age of 106 and is all smiles as she looks over to everyone helping her celebrate with her daughter, Patti Cherry, of Sonora standing by her side.

The Tuolumne County Board of Supervisors issued this certificate of recognition to Agatha Christiansen for her one hundred and sixth birthday on Monday.

A woman believed to be Tuolumne County's oldest resident at 106 years old was honored in a ceremony Monday morning for her longevity, but her family and her medical caretakers said she was more deserving of an award for her personality and disposition.

"I don't hear and I don't see, but I appreciate you coming to meet me anyway," said Agatha “Agnes” Christiansen, a resident of the Adventist Health Sonora’s Sierra Care Center on Fairview Lane in Sonora. "You're a lovely bunch of people, or else you wouldn't want to do it. I hope you come back, even if it's strange for me."

Christiansen moved to Sonora when she was 98 years old to live with her daughter, Patti Cherry.

Cherry, who moved to Tuolumne County in 2002, said Christiansen lived at home for more than two years before moving into the Adventist Health facility.

"She asked me to please put her in a home. She didn't want to be a burden," Cherry said. "I really have high praise for the people here at Adventist Health."

"She's always had a big personality and people have always loved her," Cherry said.

Christiansen was isolated for over a year during the COVID-19 pandemic, and though Cherry tried to keep in touch with her over the phone, Christiansen's hearing and sight deteriorated while in quarantine.

"She understood. She would say, 'You just gotta behave yourself,' ” Cherry said.

When they reunited about a week and a half ago, Christiansen cried for about 10 minutes, Cherry said.

Her attitude was the opposite on Monday, just as bright as the hot sun which bathed a balloon-bedecked courtyard out front of the medical facility.

Christiansen was draped in a black scarf and had a ring of shade on her face from a wide-brimmed sun hat on top of her white hair. Despite being in a wheelchair, Christiansen still appeared sprightly. As she was pushed down a red carpet laid in her honor, she scooted her purple slippers down onto the floor ahead of her.

The county typically holds an annual event honoring centenarians, but opted to honor Christiansen directly in a paired-down and masked event this year.

"The reason we got you this crown is because you're the queen of this house," a woman said, touching the gold and plastic crown in Christiansen's hands.

Tuolumne County Supervisor David Goldemberg sits on the county Commission on Aging and presented Christiansen with a document commending her age.

"I just wanted to do something extra," he said. "I hope I can get anywhere as close to that."

Rusty Ingrahm, director of the skilled nursing facility at Sierra Care Center, said she used to take daily walks in past years before being restricted to the chair. She is still known by the traits of her youth — agreeable, appreciative and social.

"She's a sweetheart," Ingrahm said. "She's always been very happy to be here."

Christiansen would credit her longevity with the ordinariness of her life, Cherry said, not any kind of philosophy, training or diet.

In fact, Cherry said, "her eating habits weren't that great."

Once in a while, Cherry will drop off Kentucky Fried Chicken or McDonalds for her mother, she said.

At least once a week, Ingrahm cuts up a danish from the Tuolumne Market into small pieces to give to Christiansen, who almost always eats the entire thing.

Cherry, who is the fifth of six children, is 79 years old. Christiansen has outlived three of her children, one of which died from COVID-19. She has 12 grandchildren, 17 great-grandchildren and 25 great-great grandchildren.

Christiansen was born in Belle Fourche, South Dakota, near the Black Hills on Aug. 12, 1914. Her parents, originally from Prussia, had fled persecution and genocide in Russia to settle in the United States only a few years before her birth. Much, if not all, of Christiansen's extended family died in the pogroms, or mass execution riots, which characterized Russia at the time.

Christiansen was one of seven children, all of whom she has outlived. She met her first husband and Cherry's father, John Johnson, at the Grange Dance Hall in South Dakota. After a divorce, she met her second husband Jim Christiansen and they moved to Oakland so he could work in the shipyards.

"She was all-American,” Cherry said. “She loved to dance, she was pragmatic. When she wanted to leave South Dakota, she did.”

Christiansen worked in restaurants and as an usherette in old-school movie and theatre venues. She moved to Pleasanton in 1941, where she resided for much of her life.

"She just lived kind of an ordinary life,” Cherry said. “She was shy, uneducated, but a practical person. She could do anything."

Like many of the era, her life as a young woman was upended by the financial crisis generated by the Great Depression — her family lost their farm — and she "sobbed for days when F.D.R. died" in 1945, Cherry said.

Franklin Delano Roosevelt, a Democratic U.S. president from 1933 to 1945, is credited for pulling the nation out of the Great Depression with a series of social programs and occupation supports known as The New Deal and for stewarding the U.S. during the majority of World War II.