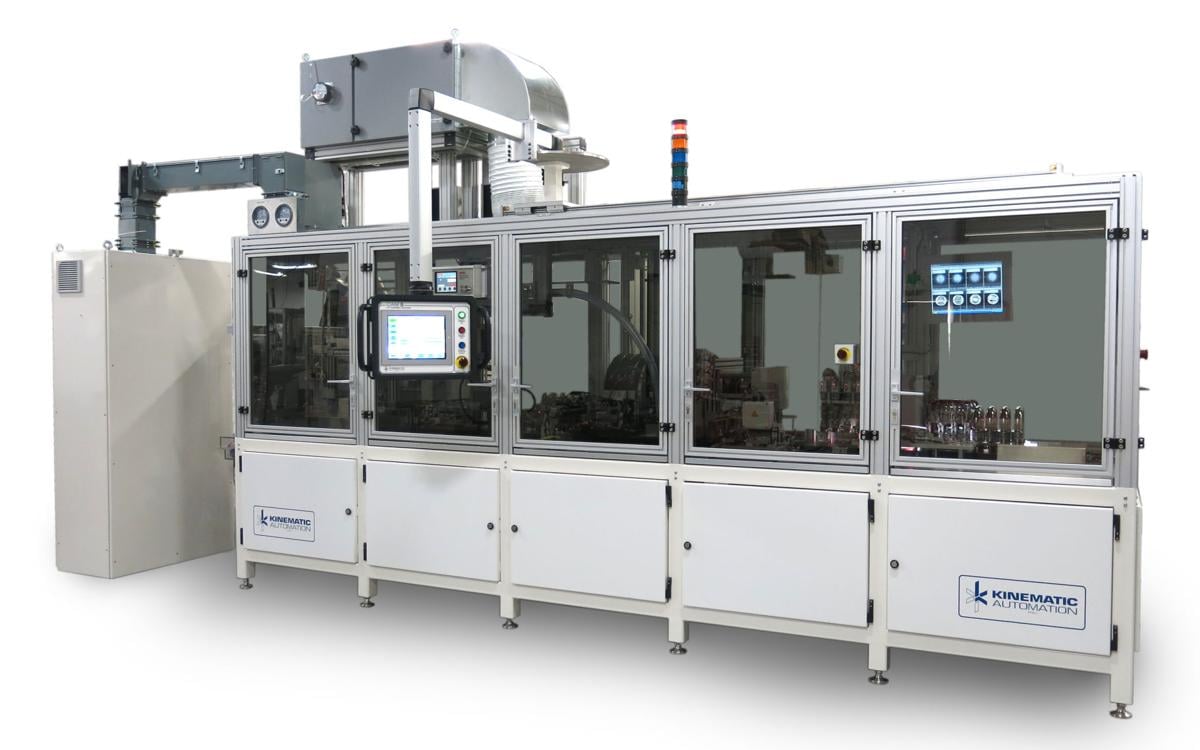 Kinematic Automation in Soulsbyville is fast tracking the production of a machine that will help manufacture coronavirus testing kits that can reportedly produce results in less than three hours. 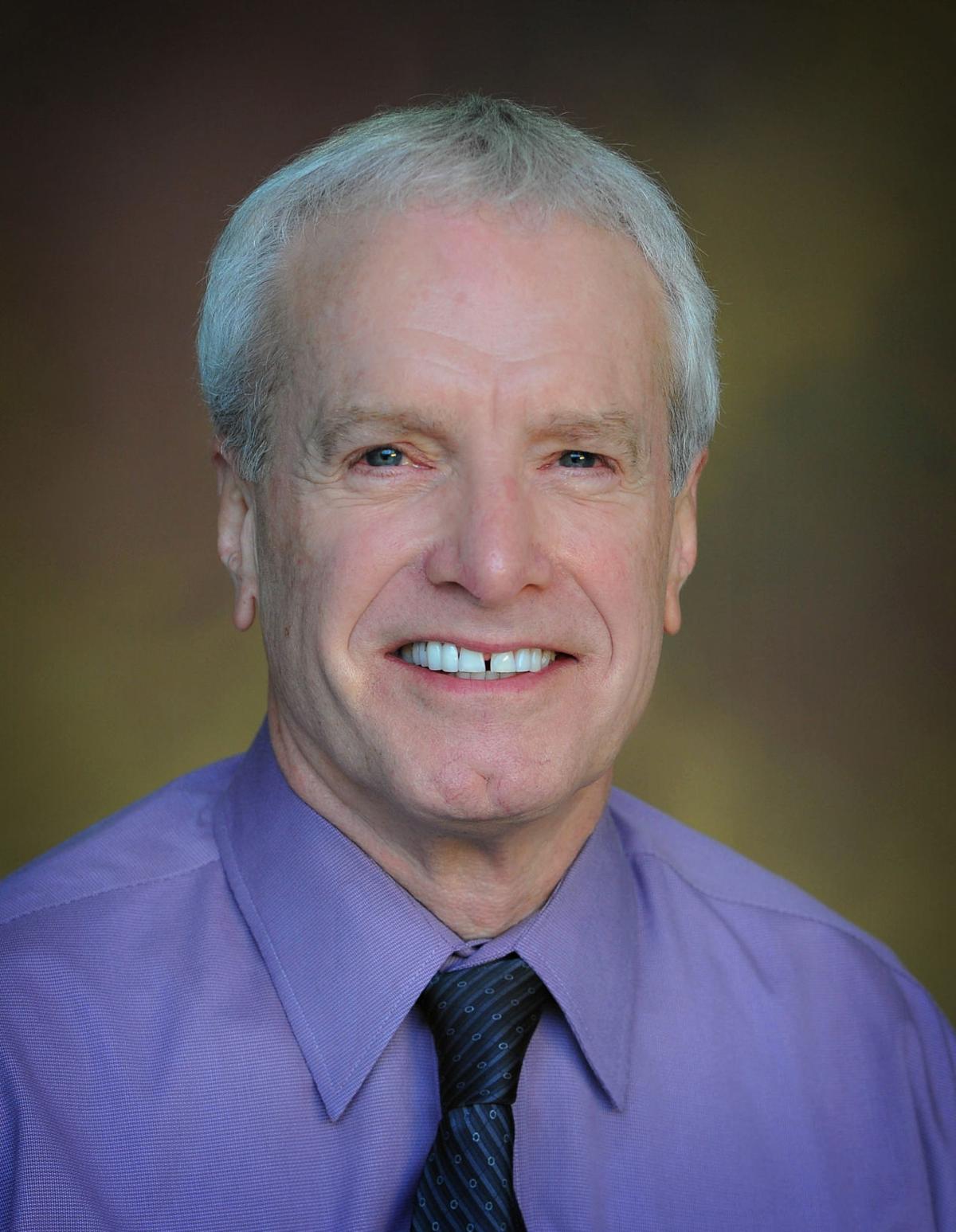 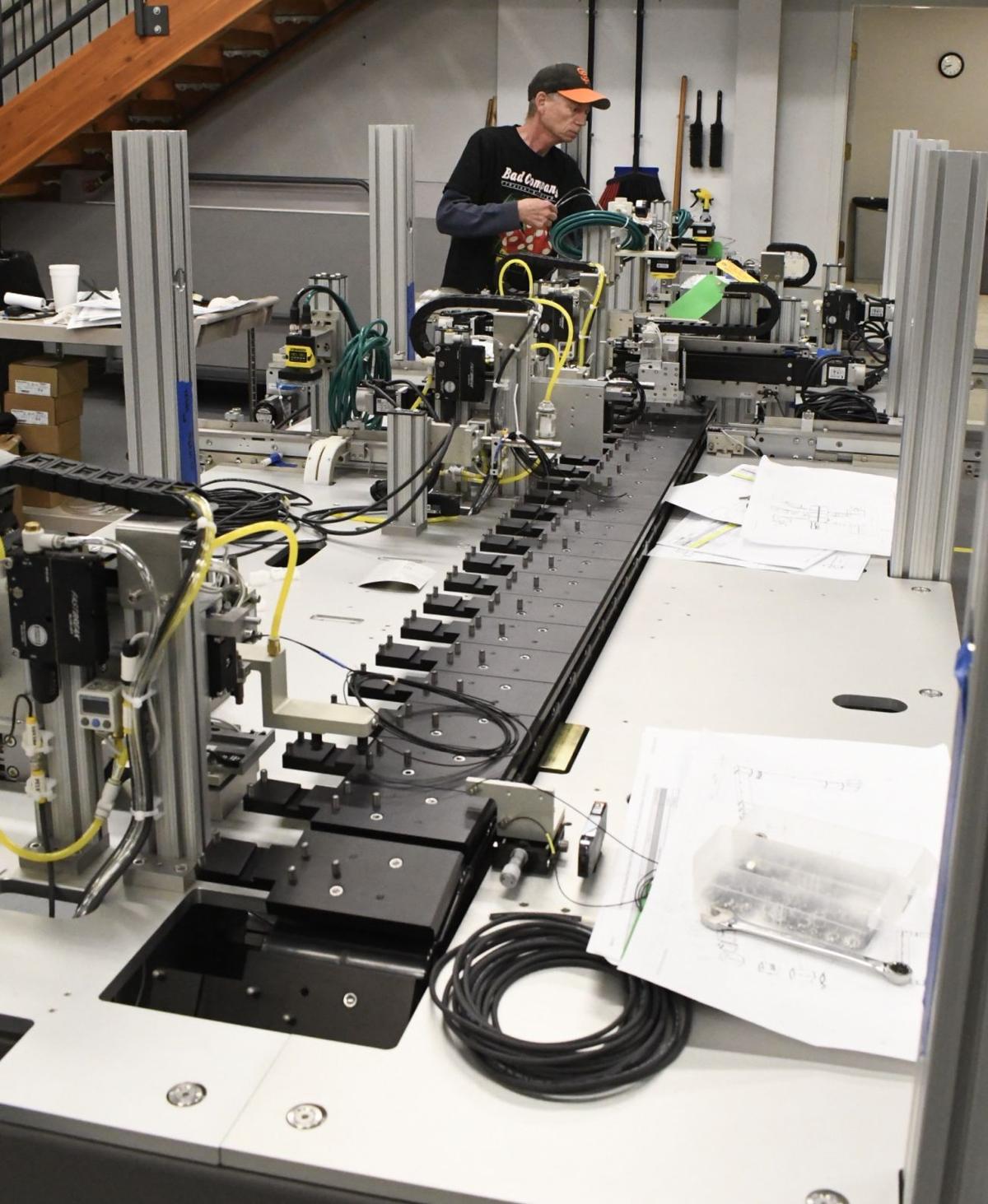 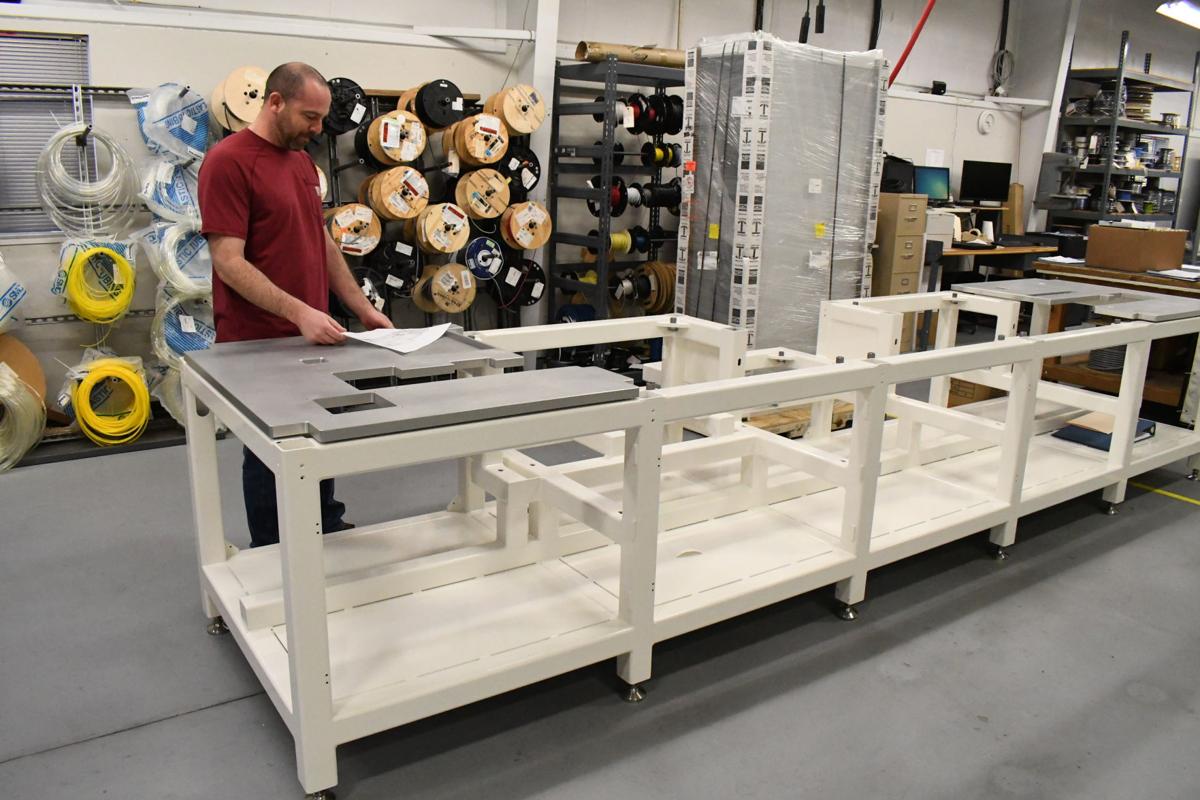 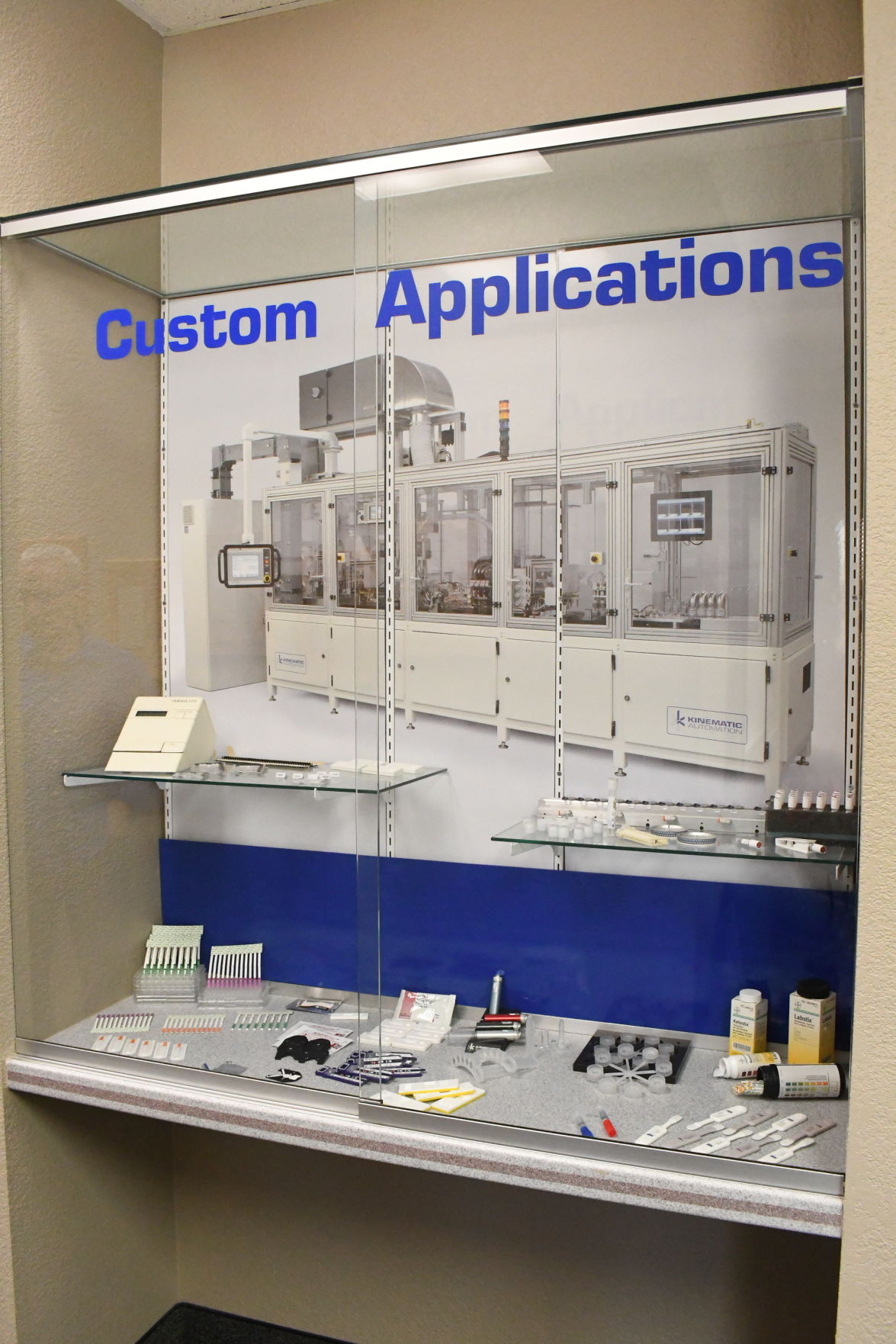 A glass display case at Kinematic displays products of the machines that Kinematic makes. 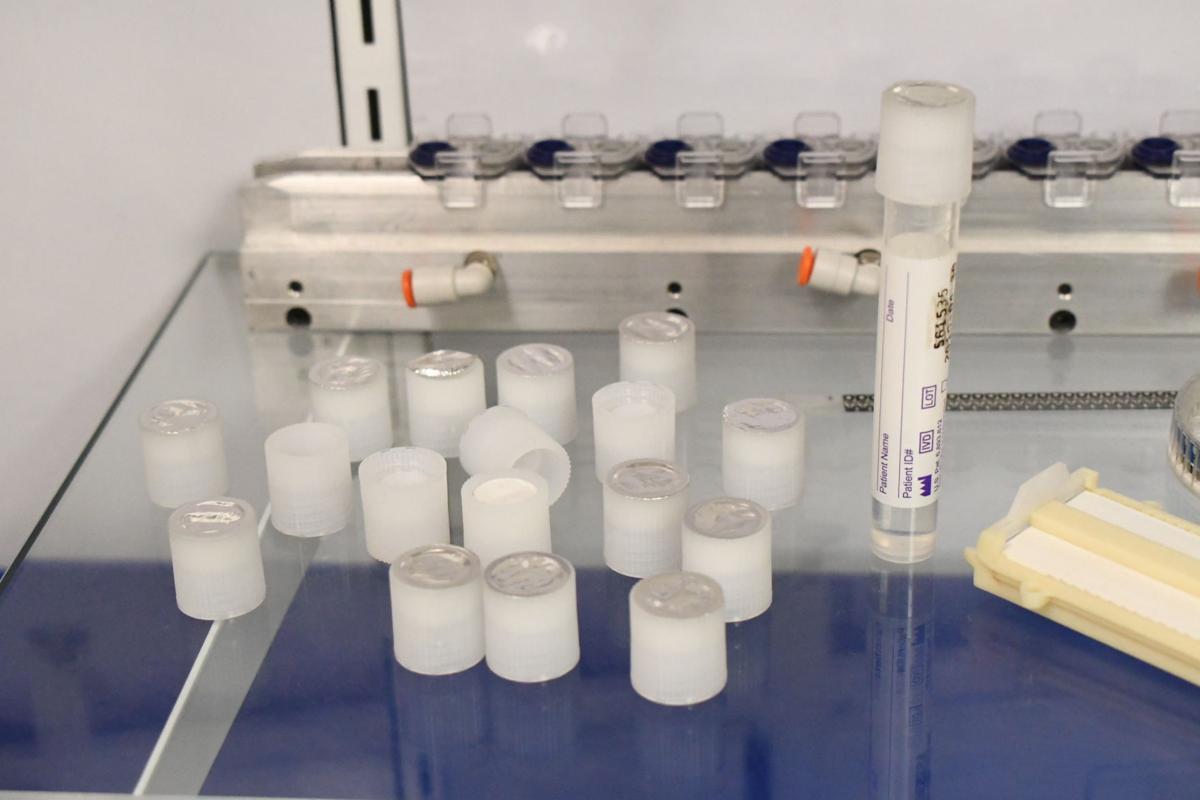 Kinematic Automation in Soulsbyville is fast tracking the production of a machine that will help manufacture coronavirus testing kits that can reportedly produce results in less than three hours.

A glass display case at Kinematic displays products of the machines that Kinematic makes.

A company in Tuolumne County is building machines that will help in the global battle against COVID-19 and looking to hire more local people with mechanical expertise.

Ted Meigs, president and co-founder of Kinematic Automation near Soulsbyville, said he was recently contacted by Hologic Inc., a longtime business partner, to fast track the production of a machine that will be used in the manufacturing process for new coronavirus test kits.

“They reached out to us with a letter that basically said Kinematic would be exempt from any state or federal regulations limiting anything we had to do to support this company from getting this new test on the market as soon as possible,” he said.

Hologic Inc., a medical technology company based in Marlboro, Massachusetts, announced earlier this week that it had gotten emergency approval from the United States Food and Drug Administration to move forward with production on the test kits.

The company stated in a press release on Monday that the kits can produce results in less than three hours, and it plans to produce 600,000 of them a month starting in April.

Meigs likened the situation to a national war effort that hasn’t been seen since World War II.

“I was too young for World War II, but I’ve never seen anything come close to this level of mobilization in my lifetime,” he said.

Kinematic Automation was founded in 1980 by Meigs and Dave Carlberg, who recently retired but is still involved in the business. The company specializes in building equipment for manufacturing medical testing supplies, such as pregnancy tests and blood glucose strips.

Meigs said the machine the company is fast tracking will manufacture the caps for the sample collection containers in the coronavirus test kits. The machine can produce 100,000 over a 24-hour shift.

“They needed us desperately because they can’t launch this without this machine that provides one of the components that’s critical to the test,” he said.

The company employs 44 people, most of whom live in the county, and is looking to hire at least four more county residents who have a background in mechanics.

Additional workers are needed to complete the machine within the one to two months, while also allowing the company to keep up with orders from other companies that are producing different types of coronavirus testing kits.

Meigs said the jobs are temporary for four to six weeks and offer good wages, but they could last longer due to the increased demand for their machines.

“If we continue to get orders, this employment might last a little longer than we anticipated,” he said. “We’re doing everything we can to accommodate everyone who is requesting equipment from us, but we do have our limits.”

The company is reluctant to hire people from outside of the county due to the risk of exposing its employees and the community to the virus.

“We thought this would be a great opportunity to put a couple folks to work that might be casualties of this current situation,” Meigs said. “We just need to get some competent mechanics who are good with tools and know how to read an assembly drawing.”

Public health experts say that social distancing and aggressive testing are key to containing the spread of the fast-moving virus, but the U.S. has lagged behind other countries in the number of tests taken.

More than 130,000 tests had been taken in the U.S. as of Friday morning, up about 27,000 from the previous day, according to The Covid Tracking Project that collects data from all 50 states.

The Korean Center for Disease Control reported more than 316,000 tests had been taken as of Friday morning in South Korea, where the number of new cases has reportedly declined.

“We’re really behind the rest of the world in getting our people tested,” Meigs said. “If you can’t get them tested, you can’t know where the disease is and how fast it’s spreading.”

There were no known cases of coronavirus in the county as of Friday afternoon. The total number of tests taken was 62, with 14 of those still awaiting results.

The numbers for the county only represent the tests routed through the county Public Health Department and reported to the state’s infectious disease system, which may not represent the actual total because commercial laboratories are only required to report positive results.

Meigs said the company feels a responsibility to complete the machine for Hologic Inc. as soon as possible to help the U.S. catch up to the rest of the world on testing and slow the virus’ spread.

“We’re not happy about the situation, but we’re proud that we can do something here that could possibly save tens of thousands of lives,” he said. “That’s the responsibility we feel here.”