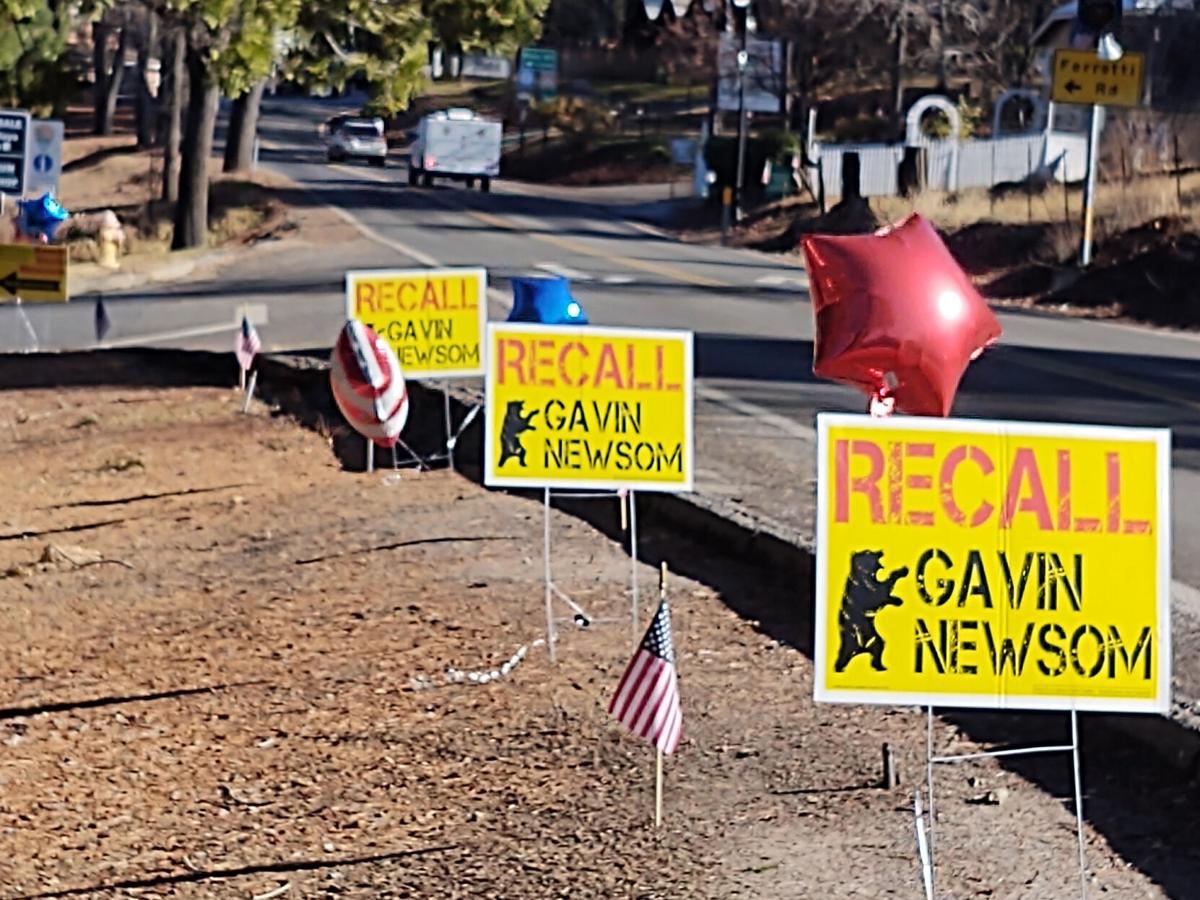 The Tuolumne County recall effort against Gov. Gavin Newsom has a periodic pop-up in Groveland. 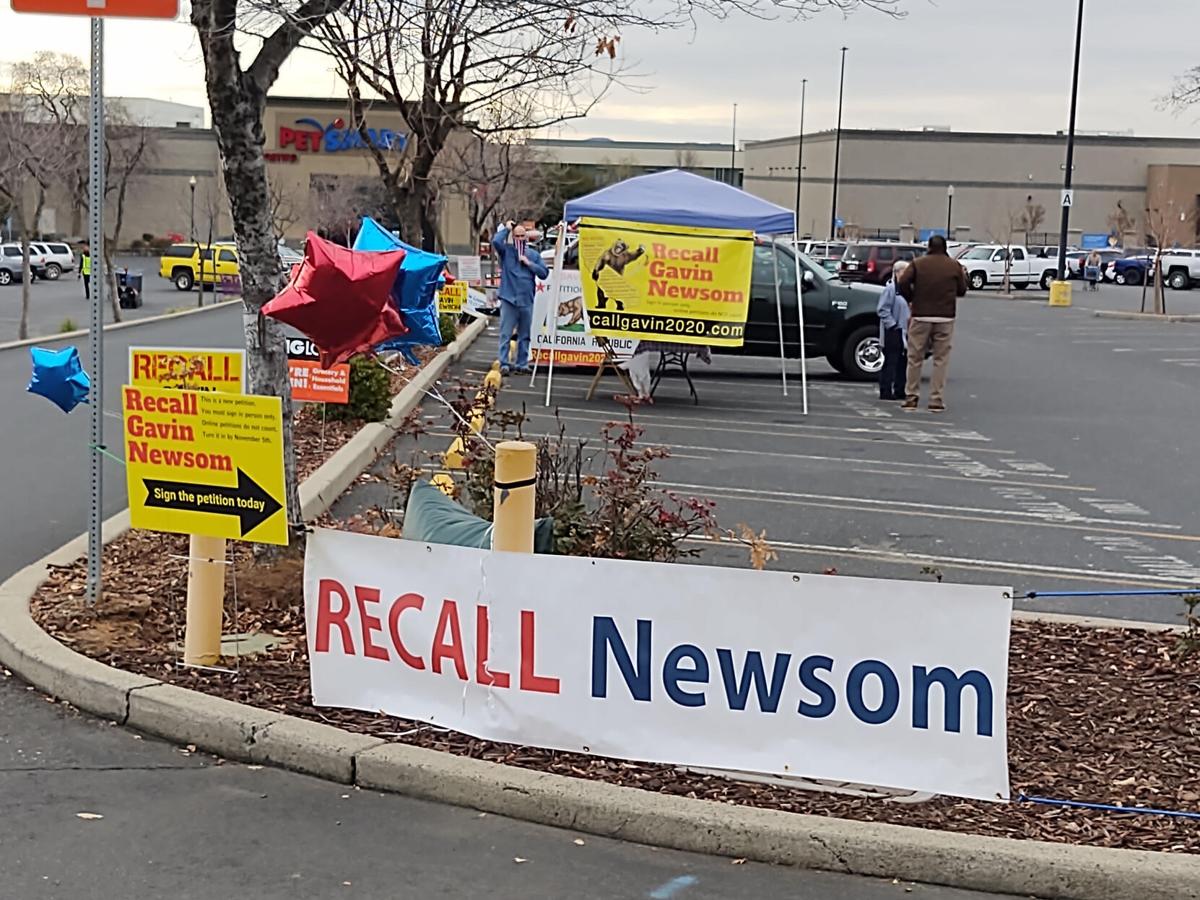 The Tuolumne County recall effort against Gov. Gavin Newsom has a permanent pop-up in the Crossroads Shopping Center in Sonora.

The Tuolumne County recall effort against Gov. Gavin Newsom has a periodic pop-up in Groveland.

The Tuolumne County recall effort against Gov. Gavin Newsom has a permanent pop-up in the Crossroads Shopping Center in Sonora.

Tuolumne and Calaveras counties have reportedly smashed threshold signature minimums for the movement to recall Gov. Gavin Newsom as the count tops over 1.4 million statewide.

"We're way over our number, but we're not going to stop," said Tuolumne County recall coordinator Jackie Mills, 58 of Sonora.

Mills estimated she and her team had accrued about 4,800 signatures countywide by Tuesday.

“To see the mismanagement and people leaving, the transition of our state over the last few years, it's been sad,” she said. “For me, this was my way to express my disappointment and participate in this grassroots patriot movement.”

Newsom swept to victory in 2018 by a significant majority with nearly 62% of the vote, but the recall movement intensified this summer fueled by COVID-19 lockdown frustrations and simmering resentments against Democratic policies in the midst of one of the most partisan and contentious national elections in history.

Once viewed as a lofty goal, the statewide effort has reached 1.4 million signatures, just shy of the approximately 1.5 million signatures required to get the recall on the ballot. And recall supporters still have over a month to get more.

"We'll probably be there by the end of the week,” Mills said. “They're just flooding into our mailroom.”

The only other recall election to successfully reach the ballot was 18 years ago against Democratic Gov. Gray Davis, when Republican Arnold Schwarzenegger was elected and when current Republican U.S. Rep. Tom McClintock, who represents the Mother Lode, came in third place overall behind primary Democratic challenger and then lieutenant governor Cruz Bustamante.

Mills is joined by a group of about six volunteers who have been with her since the beginning of June. Since then, they have set up throughout the county, from Groveland to Tuolumne to Jamestown.

As coordinator, Mills organizes events, gathers petitions and submits them to the third-party vendor and the county.

"It's beginning to be a full-time job toward the end here as we're pushing," she said.

Until the deadline, the Tuolumne County recall pop-up will be held across from Walmart and Panda Express in the Crossroads Shopping Center in Sonora, every Saturday from 9:30 a.m. to 1 p.m.

A passerby might see Mills with a megaphone, flanked by festive banners promoting the cause. A significant portion of signers treat the petition like a fast-food drive through: They're handed a brand new pen, print their name, sign their name and give a complete address. No ID is required, and the process takes only minutes.

"You can't miss us,” Mills said. “There are balloons and a bunch of people running up to sign up. This is a coalition of grassroots volunteers."

Albright said she's never sure where she will be day after day. She was in Valley Springs on Tuesday, but she has often ventured out of the county to Jackson.

"I try to get out as often as I can,” she said. “Our county is small, and we've kind of saturated it. I can say we are doing very well.”

But with any highly-charged political movement, they've faced their fair share of criticism.

The organizers said their support is a political mosaic and cannot be pigeonholed by partisanship.

"We get people from all sides. It's not just one political party," Mills said. "To summarize it, in my opinion, these are people frustrated with the mismanagement of California."

Albright said she had memorable moments, such as hearing from Bernie Sanders-supporters-turned-Donald Trump supporters and lines of cars 15-deep.

“I tell them this is a nonpartisan effort and everyone is welcome," Albright said.

Mills said she pointedly disavowed right-wing fringe movements, such as QAnon, which state Democrats have tried to associate with the recall effort.

"I do not believe that at all,” she said of the online conspiracy movement. “I have volunteers who are all from different sides of the aisle. We are just California loving people who would like to get our Golden State back and have it be managed how it should be.”

The recall effort is sponsored through the California Patriot Coalition, but its funding sources have been largely from Republican activist groups and political entities, according to CalMatters.

John Cox, 2018 Republican gubernatorial candidate, notably gave $50,000 to the effort and said he would likely run if the recall went to ballot.

The recall effort began in June, and a deadline was extended by a judge from Nov. 17 to March 17 due to the COVID-19 pandemic. The 1.5 million figure, or 1,495,709 signatures, is 12% of the voters in the last election and the requirement to trigger the recall.

Tuolumne County needed only 2,856 signatures to meet 12%, while Calaveras needed 2,593. The statewide volunteer signature count stands at 4,731 for Tuolumne and 3,423 for Calaveras at this time.

Organizers must send signatures first to the third-party vendor and then to the county for verification. So far, they have submitted 2,129 to Tuolumne County and 1,976 to Calaveras County.

April 29 is the deadline for counties to verify signatures, according to CalMatters.

The county registrar verifies the signatures much like they would do on a mail-in ballot during an election year. Those signatures are then sent to the secretary of state, who would certify the results and schedule the recall election.

The election would be held later this year, possibly in late summer or fall, but is dependent on when the deadlines are met.

If it makes it to the ballot, it would ask two questions. The first would be if voters want to recall Newsom. If a majority of voters said yes, the next question would be a vote for whom to replace him.

There is no limit on the number of candidates who can be on the ballot. The person with the most votes wins, even if they do not get a majority.

The recall effort has gained enough traction now to be acknowledged by President Joe Biden's press secretary, Jenn Psaki, who tweeted on Tuesday, "in addition to sharing a commitment to a range of issues with @GavinNewsom from addressing the climate crisis to getting the pandemic under control, @POTUS clearly opposes any effort to recall @GavinNewsom."

Leading members of the recall movement took the statement as a potent admission that they were gaining traction.

"Welcome to 2021, and this is the biggest political story that will be in America this year, the recall of Gavin Newsom,” said Randy Economy, a senior advisor for the recall movement. “I'm just wondering what took them so long to get engaged? I think it's great. Welcome aboard, White House,"

Still, Economy said they are not resting on their laurels until the deadline passes.

"We're cautiously optimistic,” he said. “We're going to work as hard as we can until March 17. Over two million is our goal.”

Economy said they expect a press announcement, possibly by the end of the week, while a third-party vendor continues to evaluate the validity of their signatures before they submit them to the county offices.

"Their word is gold, and they're usually totally right on target," he said.

Dana Baker, member of the Tuolumne County Democratic Central Committee, acknowledged that Newsom and other American governors did not "successfully put the people first in their COVID responses."

"That said, a recall of Newsom is extremely dangerous, because Republicans are generally in favor of much more harmful policies on coronavirus, healthcare, labor, conservation, and more, all of which affect us here in Tuolumne County,” she said. “But ultimately, it’s imperative the California Democratic Party prepares a game plan for the potential recall that gives people a chance at improved leadership regardless of the outcome.”