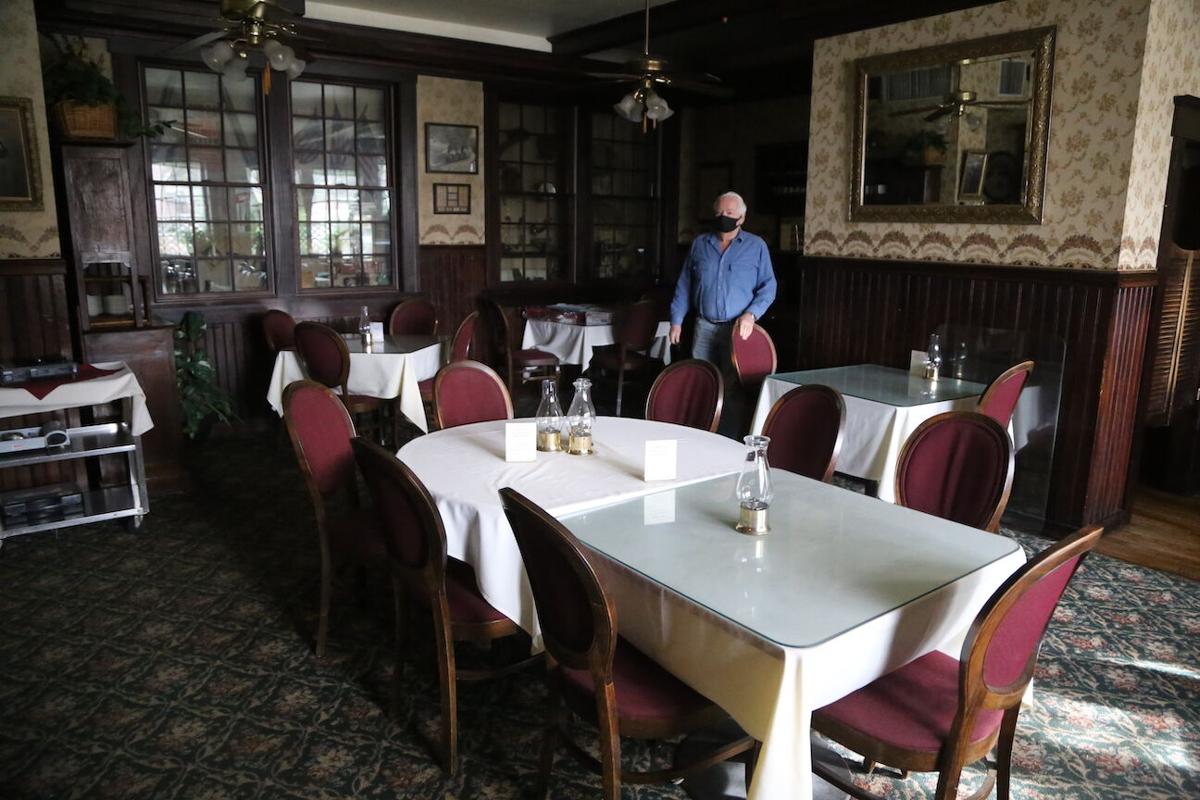 Stephen Willey, owner of the National Hotel Restaurant & Bar in Jamestown, stands in one of his business' empty dining rooms on Wednesday. 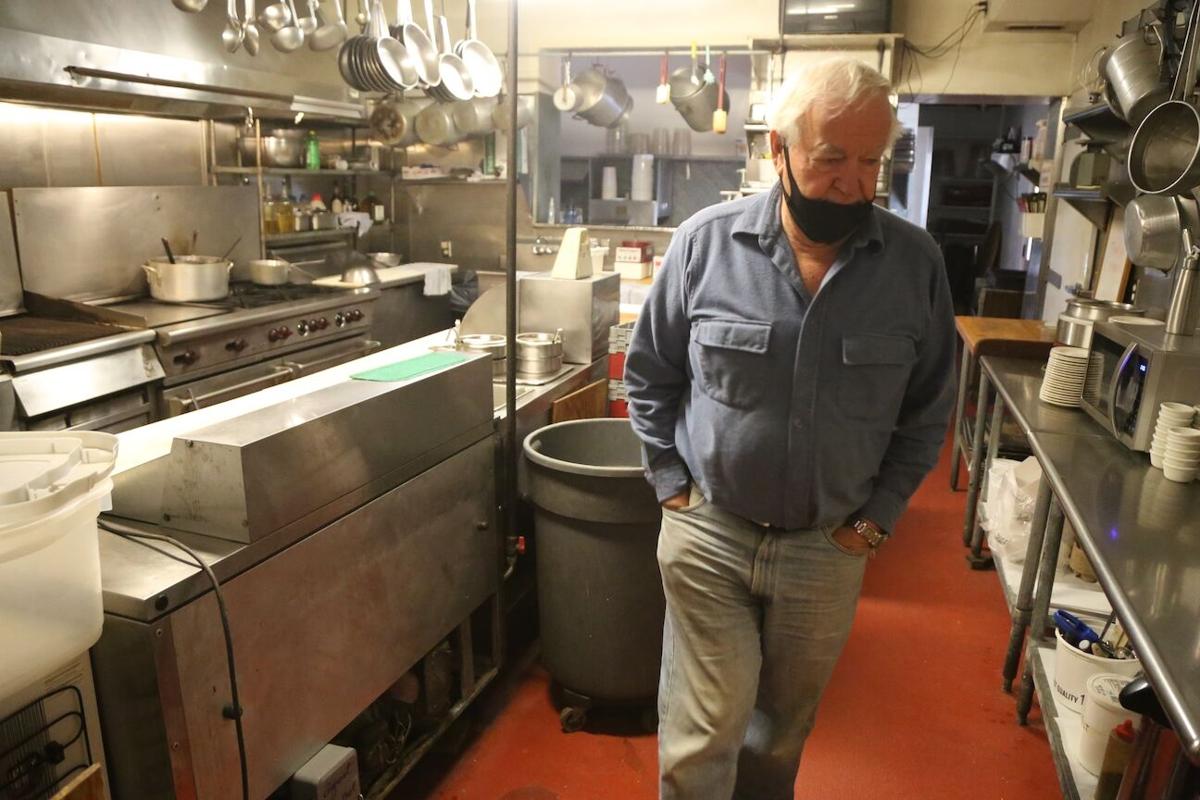 Stephen Willey, owner of the National Hotel Restaurant & Bar in Jamestown, walks through his business' kitchen, which is not in use right now.

Stephen Willey, owner of the National Hotel Restaurant & Bar in Jamestown, stands in one of his business' empty dining rooms on Wednesday.

Stephen Willey, owner of the National Hotel Restaurant & Bar in Jamestown, walks through his business' kitchen, which is not in use right now.

Some restaurant owners in Jamestown and Sonora have closed their doors temporarily due to current COVID-19 restrictions, saying they maintain their high quality even when serving to-go orders only and can’t break even in some cases, so they intend to stay shuttered until county and state health authorities allow outdoor dining.

“We’re waiting for the county health department and the state to permit outdoor dining, indoor dining or both,” Stephen Willey, owner of the historic National Hotel Restaurant and Bar in Jamestown, said Thursday in a phone interview.

“We’re known as one of the best restaurants in probably three counties,” Willey said Wednesday at the National. “We’ve been doing our best to follow the guidelines, but now, with takeout only, our food does not travel well. Given the quality of our food, we’re not going to compete with fast-food.”

Willey announced he was closing the National temporarily on Sunday this week. On Thursday, he clarified that he has limited rooms available to overnight stays, but the kitchen, two indoor dining rooms, outdoor patio dining and the saloon, with total seating for more than 100, are all closed for the time being.

Willey said he hopes to reassess the situation and reopen in the beginning of February.

Willey also said he is in the process of selling the business. He said he has two different parties who are looking at the National right now. He said he wants to retire and is seeking a special new owner, who will look after his 18 employees, half of whom have been with the National 10 years or more.

Before Sunday, Willey said the National had been serving take-out only since early December. Before that, he and his staff were able to offer outside dining on the 1859 hotel’s patio.

Prior to that, the National had indoor dining with social distancing. In May, it was outside dining. During the first few months of the pandemic, it was closed.

It’s been hard to keep track of all the changes, Willey said.

During an interview on Wednesday at the National, Willey took a call from the DoorDash delivery service.

“They had an order for us,” he said, “and we forgot to let them know we are on hiatus.”

Restaurants are supposed to be limited to take-out only under the current regional stay home order, effective since Dec. 6 and contingent on intensive care unit availability in the 12-county San Joaquin Valley region that includes Tuolumne and Calaveras.

As of Thursday, ICU availability in the region remained at 0%. A 4-week ICU projection for the region from the state Department of Public Health stated it “does not meet criteria to exit order.”

The Diamondback Bar and Grill on South Washington Street in downtown Sonora is another popular restaurant in the county that is temporarily closed due to the COVID-19 restrictions.

“My employees are extremely upset,” Diamondback co-owner Lana Smith said in a phone interview Monday. “Between Copperopolis, Jamestown and Sonora, there are other businesses that are noncompliant. We tried to stay open one week. We couldn't make it.”

It’s frustrating, Smith said, in part because Diamondback is known for its food offerings, and it’s more difficult to maintain high standards when everything is prepared for take out only.

“We make everything fresh,” she said. “We can't change the quality of our food. We're closed for now, and we hope we can open again soon.”

Smith said she and co-owner Frank Uzzardo have applied for grants, but they’ve received no funding so far.

“We cannot afford it” to stay open for take-out only, Smith said. “We have to do a certain amount of sales a day. We have a kitchen staff. Everything is against us, the small businesses.”

Smith said a lot of other businesses are not complying with the current local and state health guidelines, and no one is enforcing them. She opened for indoor dining briefly in August and received a cease-and-desist order from the City of Sonora, with threats of fines up to $1,000.

Sonora Brewing Co. also received a cease-and-desist order in August. City staff said the orders are a step before the city potentially imposes fines on businesses for not following COVID-19 rules. Fines begin at $250 for the first violation and up to $1,000 for the third.

“I don’t have the money,” Smith said this week. “We have to close and be compliant. If I stay open and serve outside, I could do it. We're remaining closed until we can serve outside.”

Smith said she feels there are some businesses that are being picked on and called out for not complying with the letter of the current guidelines, while other businesses are allowed to do as they please, including even serving people indoors.

“I can't stay closed forever,” she said. “The problem is, Diamondback Grill is the heart and soul of the county. You'd think people would work with us more. Right now, we are waiting until we can open and start serving people, not throwing a burger in a box. It's just not cost-effective.”