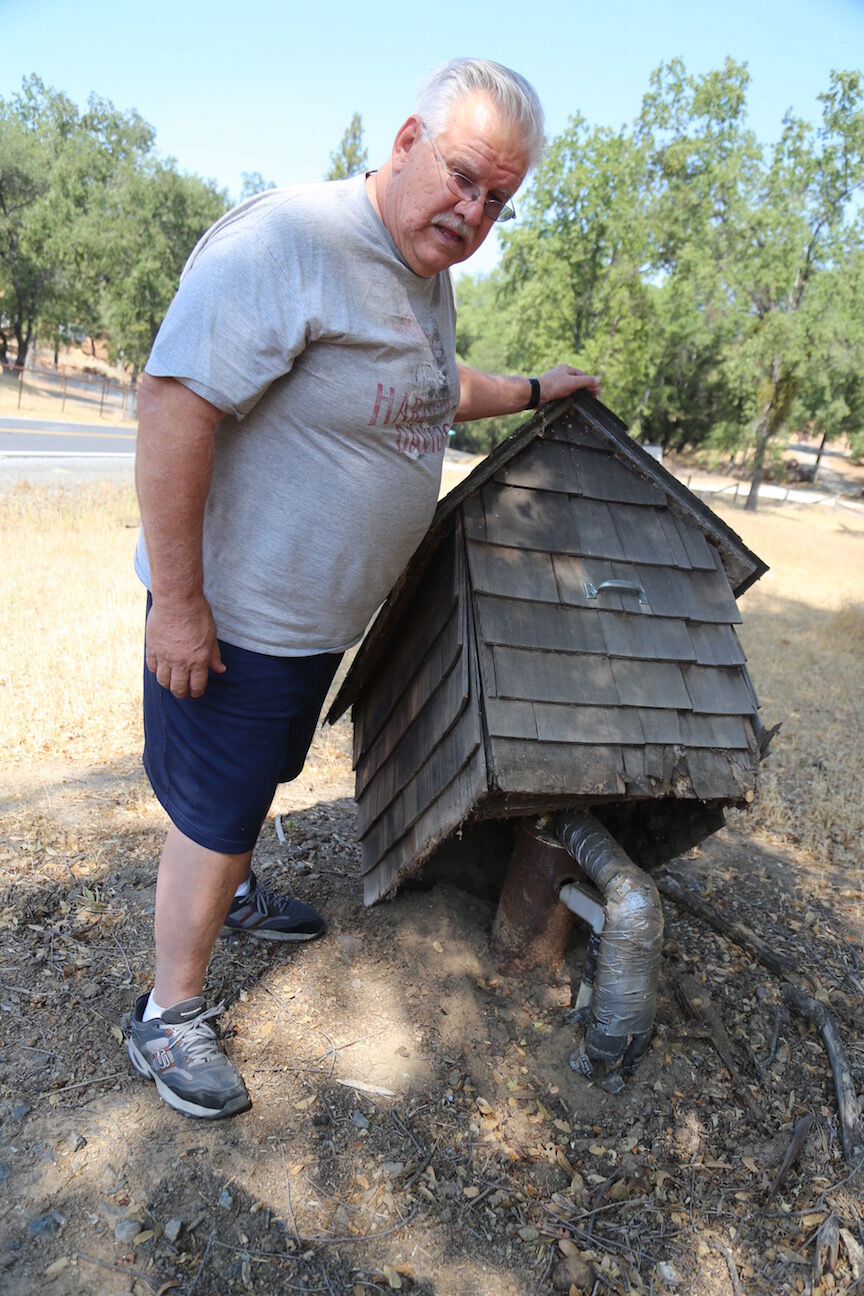 Terry Carney, of Soulsbyville, shows the head of his well that he says dried up about two weeks after the July 9 magnitude 6.0 earthquake that struck near Walker, Nevada and was felt by people up and down the Sierra Nevada and as far west as the Bay Area. 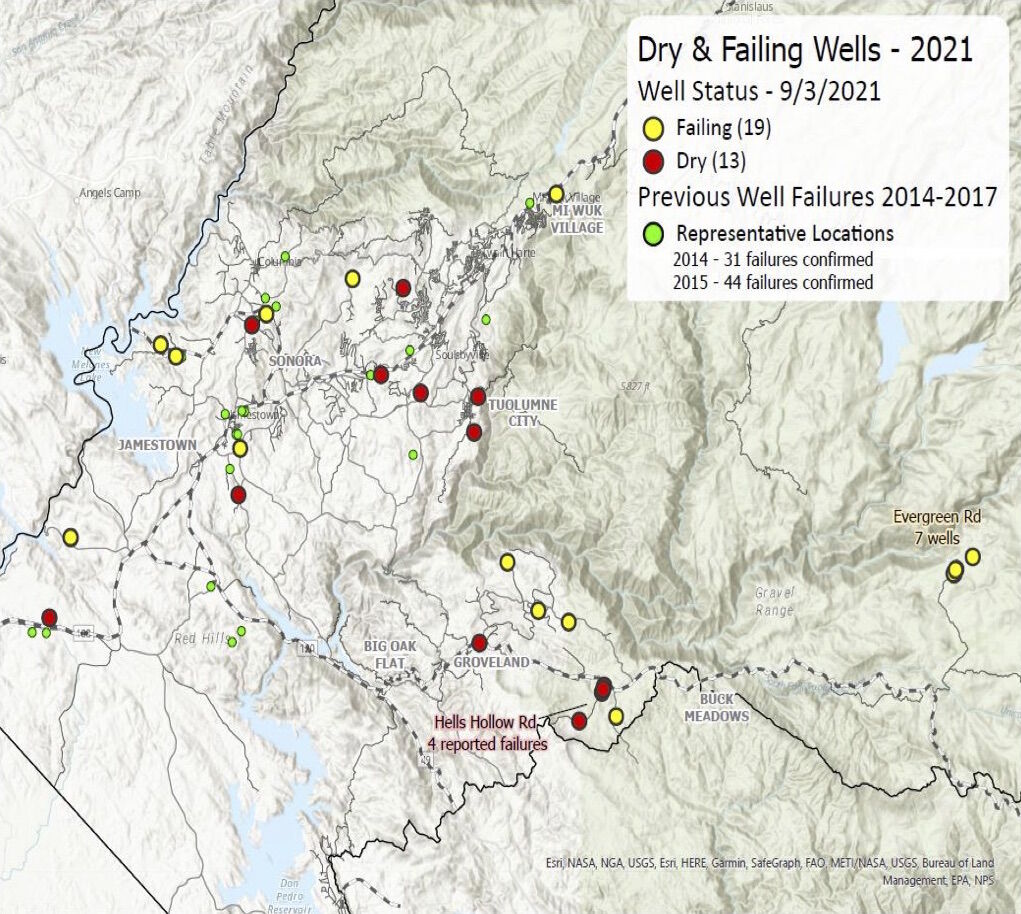 A map presented to the Tuolumne County Board of Supervisors on Sept. 14 shows the areas where wells are failing or going dry.

Terry Carney, of Soulsbyville, shows the head of his well that he says dried up about two weeks after the July 9 magnitude 6.0 earthquake that struck near Walker, Nevada and was felt by people up and down the Sierra Nevada and as far west as the Bay Area.

A map presented to the Tuolumne County Board of Supervisors on Sept. 14 shows the areas where wells are failing or going dry.

Terry Carney, 71, showed the head of his well Thursday and said it dried up about two weeks after the July 9 magnitude 6.0 earthquake that struck near Walker, Nevada and was felt by people up and down the Sierra Nevada and as far west as the Bay Area.

Carney’s well is one of more than a dozen that have dried up so far this year in Tuolumne County, in addition to at least 19 other wells that are failing but have not yet dried up, according to county staff.

The county had a combined total of 75 confirmed well failures during recent previous drought years in 2014 and 2015.

This is his first problem Carney’s had with the roughly 300-feet-deep well since he and his wife, Ruth, moved into their place off Soulsbyville Road in 2004. Carney said the house and the well were built four years earlier in 2000.

Neighbors with deeper wells have not had issues, Carney said Thursday.

The Carneys are now paying $200 a week for Covers to fill their 350-gallon holding tank with drinking water. The tank is connected to their home's plumbing.

Tuolumne County has shared information with the Carneys about low interest loans for drilling, though the couple have not had any financial assistance from the county at this point.

“We’re doing laundry at a relative’s house,” Terry Carney said. “We shower in the morning and we keep them short. We’re using a lot of paper plates. We flush the toilet every third time. We’re basically trying to conserve water every way we can.”

An updated drought map for the Golden State released Thursday shows most of Tuolumne and Calaveras counties remain in the most dire stage of drought, according to U.S. Drought Monitor scientists.

Dry and failing wells were discussed by county government staff and the elected Board of Supervisors on Tuesday.

“It’s pretty obvious this drought is continuing and it’s not getting any better,” County Supervisor David Goldemberg said at the meeting.

Dore Bietz, the county Office of Emergency Services coordinator, noted that having a wet winter this year does not mean the county will be out of the drought by 2022.

Some commercial businesses have wells that are failing, Bietz said. The county is trying to track every property with dry or failing wells, whether the people there use the water for drinking and other household uses, or exclusively for irrigation and agriculture, she said.

Applications for assistance with dry wells and failing wells are being fast-tracked, Quincy Yaley with the county Community Development Department said. Two families have requested emergency assistance and have been provided bottled water, Bietz said.

Some people are contacting the county about dry and failing wells, but they are hesitant to say where they are and share contact information because they fear code enforcement consequences and possibly having their homes red-tagged, Yaley said.

The board voted unanimously to continue drought response measures that include:

• Directing people with dry and failing wells to available resources.

• Applying for funding for possible assistance to aid in drought response.

• Extending an existing proclamation of a local state of emergency due to continued drought conditions.

In addition, as drought impacts improve or worsen, county staff will continue bringing recommendations to the board, including dedication of staff and funding if needed, and setting aside funding to help people impacted by dry and failing wells, and other drought impacts.

Eight days later on May 18, the county Board of Supervisors proclaimed its own local state of emergency due to drought and extended it in July. Since then, a county drought task force has met an unspecified number of times and is expected to meet once a month going forward. The county Office of Emergency Services has been keeping track of those needing assistance due to drought impacts, including dry and failing wells, and has been working with Tuolumne Utilities District and Amador-Tuolumne Community Action Agency to provide relief.

Yaley and OES staff are working on how to better track and verify well failures in the future, Bietz said. The county Community Development Department and county OES do not have staff to dedicate to drought relief unless future funding is allocated or received.