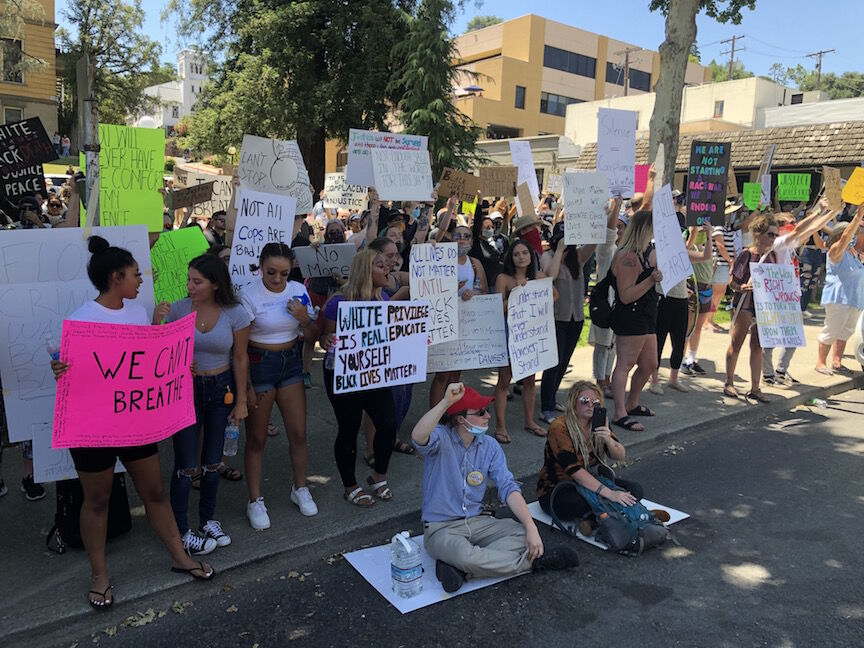 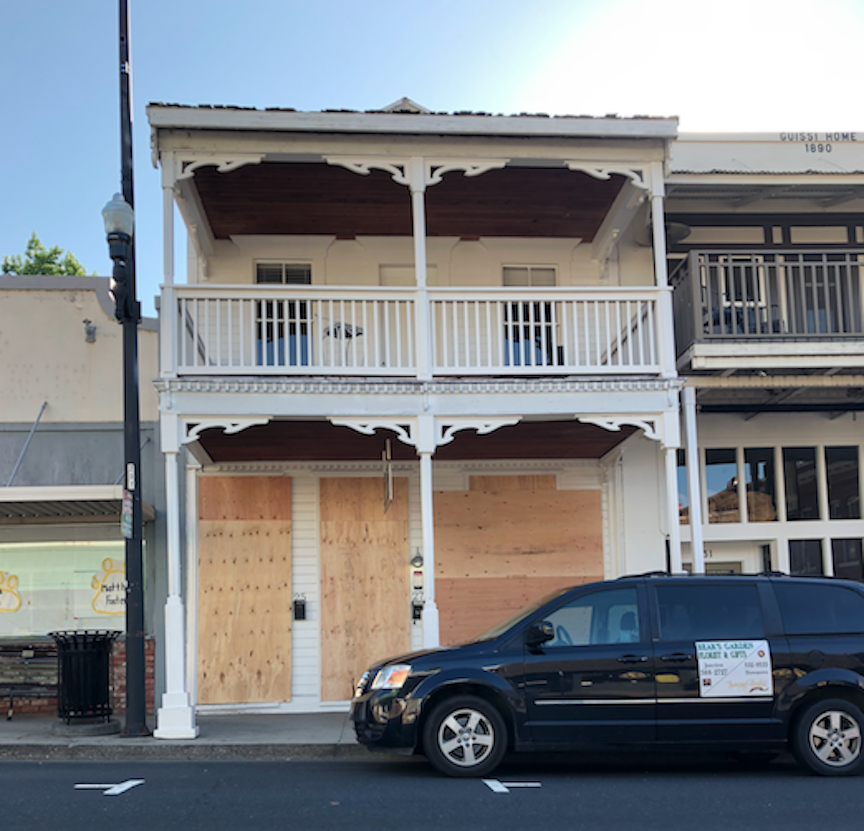 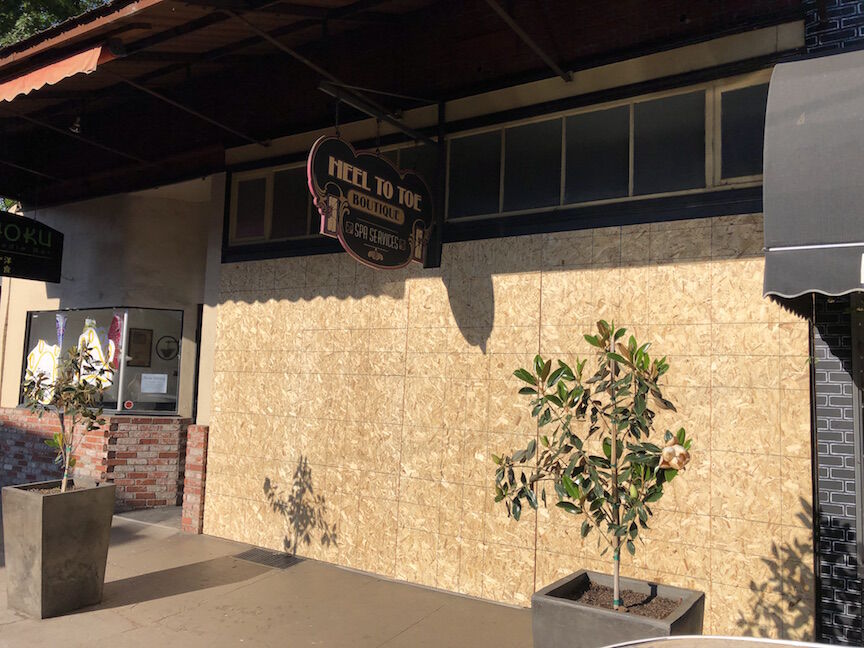 Hundreds of people showed up Wednesday for a rally supporting Black Lives Matter at Courthouse Square and for a gathering across the street of people opposing them.

People chanted slogans back and forth. The Black Lives Matter supporters stood silently while many laid on the ground or kneeled for almost nine minutes, the amount of time a police officer kneeled on the neck of George Floyd before he died in Minneapolis a week ago.

Earlier, some downtown Sonora business owners boarded up their buildings.

PhoneSmart was one of the businesses along Washington Street that had plywood over its windows Wednesday morning before the protest began.

Derek Nunes, who owns the cell phone repair shop, said he decided to board up after a neighbor told him about a post on Facebook regarding people wanting to come from out of the area after the protest and “take over the city.”

Nunes said he isn’t worried about the local protestors, and he agrees with their message, but he’s concerned about the potential for outside agitators and doesn’t want to take chances.

“I don’t have a reliable source, but I would rather just be safe than sorry,” he said. “I’m still going to be open today and go about a business as normal.”

Brian Fischer owns the building that houses PhoneSmart and also recently opened the Sonora Fly Co. on South Washington Street, which also had plywood over the door and windows.

Fischer said he didn’t have an opinion on the protest either way and was taking the precaution to protect his investment.

“It’s better to have it and not need it than to need it and not have it,” he said.

The protest envisioned as a peaceful gathering has become clouded with fear as people speculate over out of town people coming to stir up trouble.

Organizers wanted to protest the killing of George Floyd at the hands of a Minneapolis police officer last week and more broadly the conditions of the African American community.

Shortly before noon — more than an hour before the protest was supposed to start — about 30 people wearing tee shirts with "All Lives Matter" printed on them and carrying American flags gathered across the street from the park outside the Sonora Veterans Hall.

Meanwhile, a protest planned in Calaveras County for Friday has been postponed because of threats made against the organizers, according to their Facebook post.

"It was sad to see the true colors of some people in the community, but it was great to see so many supporters" she said on Facebook.

Loomis was joined by Riley Lowell, 18, both of whom live in the city and graduated from Bret Harte High School, in organizing the event

Loomis said they decided to call the protest off due to the number of threats they received from people within the community who didn’t support their message.

“It got to be too much for us to handle at a personal level, and we didn’t want to endanger anyone who was going to come out to protest,” she said.

Some of the threats included bringing guns to the protest and running over protestors, Loomis said.

Loomis said the pair met with officials from the City of Angels Camp, Angels Camp Police Department and Calaveras County Sheriff’s Office who weren’t supportive of the event.

“They said they were protecting our First Amendment rights, but not here, not now and not this way,” she said. “We need to get some of their support if we want this to be peaceful as possible.”

The pair have yet to set a new date for the protest, but Loomis said they are hoping it could be possible within a week or two.

Loomis said she didn’t expect the level of backlash when they first announced the protest on Friday. She and Lowell had previously organized a protest for gun safety while they were students at Bret Harte High.

“I’ve never had backlash like this for anything I’ve organized,” she said.

There were rumors in the community about people from outside of the area being behind the event or planning to come up and cause chaos, but Loomis said she didn’t see any actual evidence of that.

Loomis said it wouldn’t make sense for people to come to a small conservative town when they live in a bigger liberal area that’s more supportive of their message.

“Anyone who knows us knows that we’re not part of any radical fringe group,” she said. “We’re just passionate about social justice and standing up for those who can’t use their own voice.”

See complete coverage of the event in the Thursday Union Democrat.

See Thursday's Union Democrat for photos and stories about the protest.