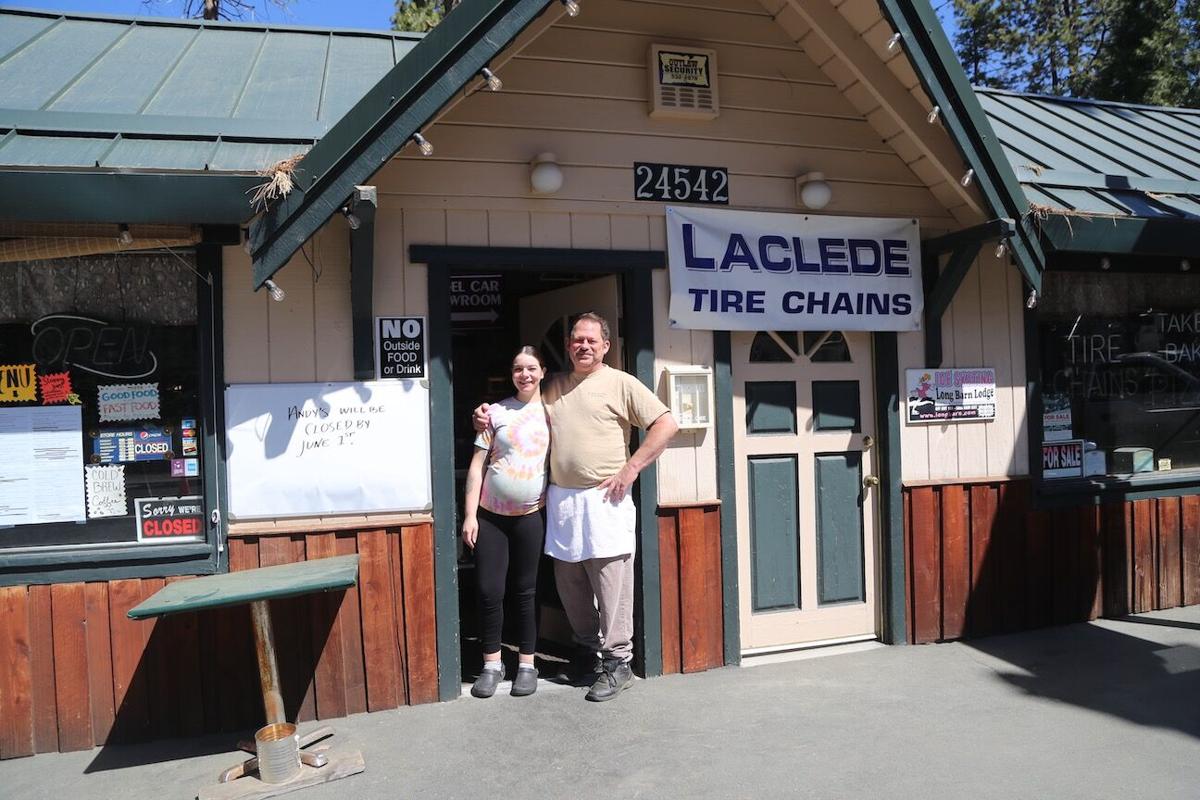 Andy Cohen, owner and founder of Andy's Mountain Grill & Deli, stands with his longtime employee Sarah London on Thursday morning in Mi-Wuk Village. Cohen announced last weekend he is closing the business he first opened in December 1995 by June 1. 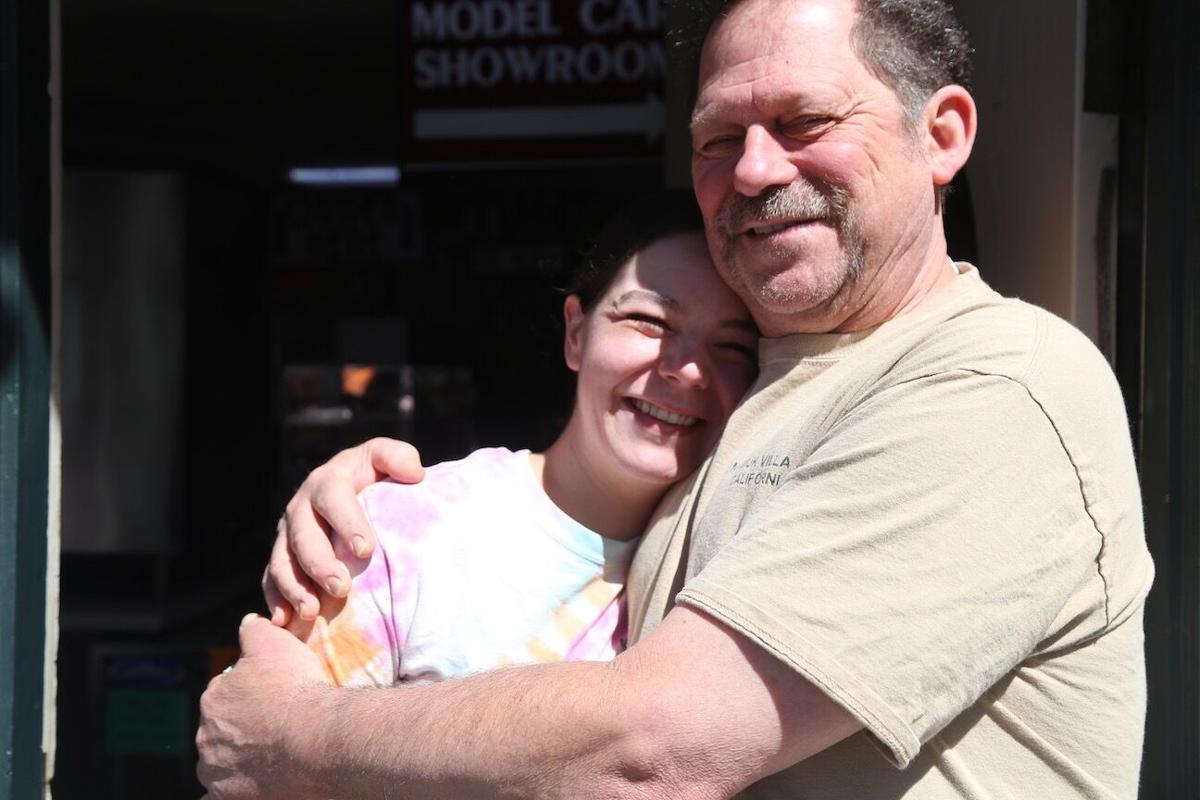 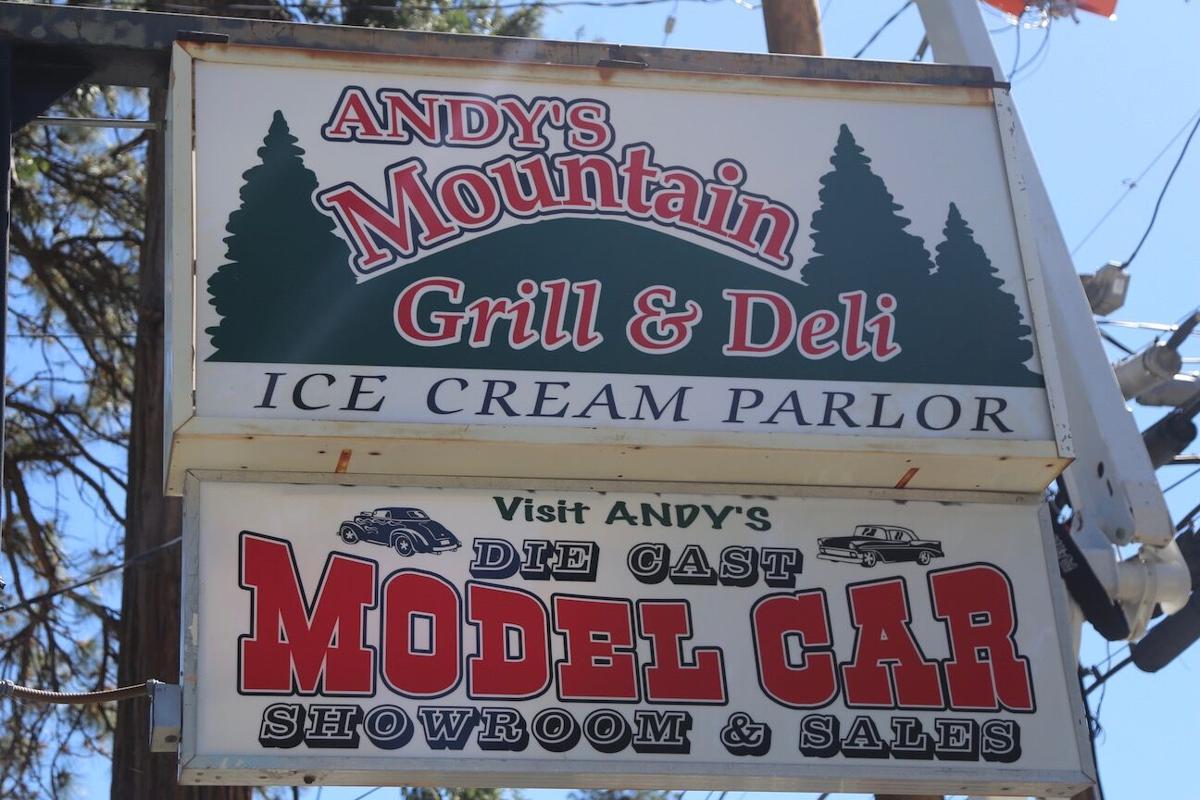 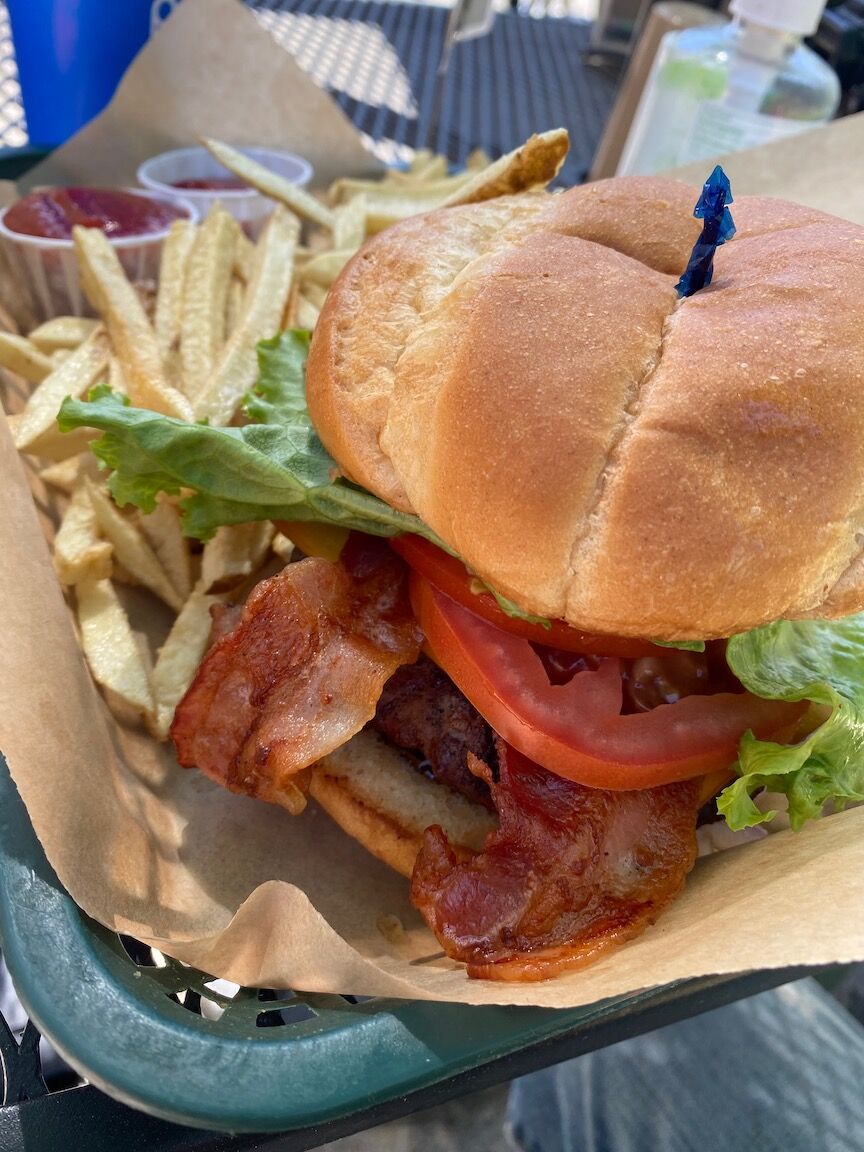 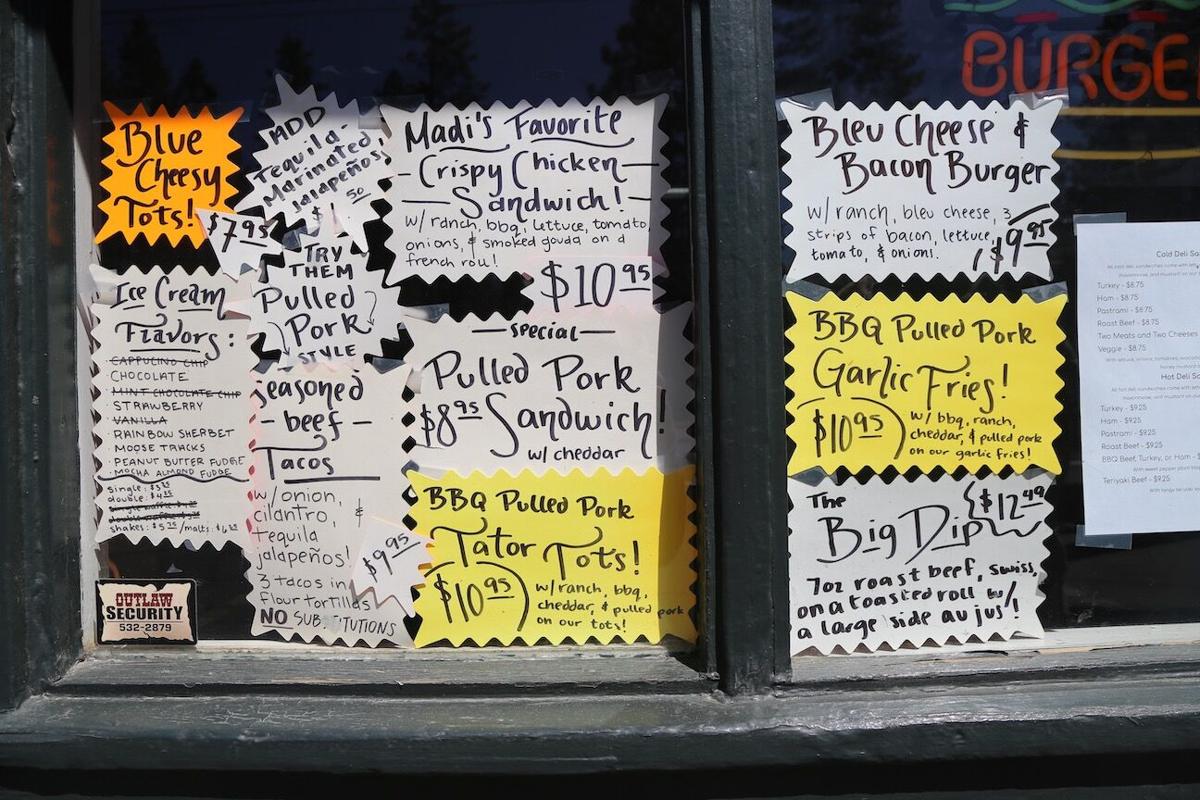 Andy Cohen, owner and founder of Andy's Mountain Grill & Deli, stands with his longtime employee Sarah London on Thursday morning in Mi-Wuk Village. Cohen announced last weekend he is closing the business he first opened in December 1995 by June 1.

Andy Cohen, a Los Angeles County native who brought his love of burgers and barbecue to the Mother Lode, says he’s closing Andy's Mountain Grill & Deli in Mi-Wuk Village by June 1, ending his quarter-century run as maker of what some say are among the best burgers in Tuolumne County.

“Twenty-five years I’ve been peeling potatoes,” Cohen said last week as he scraped spuds in the kitchen at Andy’s, an hour before he would begin making customers their first burgers of the day at 11 a.m. “It’s the story of my life.”

Cohen says he’s losing staff and hasn’t been able to rehire anyone because unemployment is so good right now that no one wants to work. Other business owners in Tuolumne County have similar observations about the challenge of hiring in the midst of the COVID-19 pandemic.

The 63-year-old also said he’s disappointed he hasn’t been able to sell Andy's Mountain Grill & Deli for a decade.

Asked how many burgers he’s made and sold since he first opened Andy’s on Dec. 22, 1995, Cohen said, “thousands, there’s no way to know.” He said his most popular burger is the smoky cheddar bourbon-style bacon burger. The one he thinks is best is the tequila-marinated jalapeño bacon gouda garlic burger.

Some customers stick to the basic Andy’s All-American burger with no cheese, no bacon, no fries, then pour on Andy’s habanero hot sauce. They say that alone is worth the wait at Andy’s, where among the many signs posted inside and outside there is one that says, “We make Good Food not Fast Food” and “Please be Patient.”

Asked about his prior professional cooking experience and if he has any secrets to share about how he does burgers, Cohen said in his kitchen, “I learned it here. Right here. This is my experience. I always enjoyed cooking and barbecuing at home, growing up in Marina del Rey. The secret is burgers start with fresh 100 percent beef. No seasoning, no butter, never frozen, and char-broiling.”

Char-broiled burgers are better than flat-grilled burgers every time, Cohen said. Each day he plans to open, it takes 30 minutes to heat up the char-broiler and his flat grill, and about 15 minutes for the deep fryer to get hot enough for his fresh-cut fries.

Cohen said he and his staff get inspired when they go to food and cooking shows in places like Pleasanton and San Francisco. With a bunch of different people cooking and preparing different foods, they find new ingredients to try. They didn’t go to any food shows this year because of the pandemic.

Cohen said he wants to thank his loyal followers over the past two and a half decades.

“Thanks for being customers and appreciating our efforts and enjoying our food,” Cohen said. “I want to emphasize I wish somebody bought the place and kept it going. It’s been for sale 10 years. Nobody wants it. The problem is it’s hard to make money up here.”

Cohen came to Tuolumne County in the 1990s from his job with Vic’s Towing in L.A. County. He and his girlfriend came up for two weeks and fell in love with the trees and mountains.

“We’re closing because we’re losing Sarah,” Cohen said, referring to his main helper at Andy’s, Sarah London, 29, who is eight months pregnant. “We were losing two more by August. We can’t run the place with just one employee.”

London said she and Cohen have been trying to hire new help for longer than the past three months and haven’t had any responses bear fruit.

“People apply through Facebook and email, but it seems they make that first contact to get unemployment,” Cohen said. “Nobody follows through. That seems to be the case throughout the county.”

“Yes, definitely, we’re having trouble finding qualified people,” Leif Kruger, one of the new co-owners at St. Charles Saloon in old town Columbia since November, said in a phone interview. “We have three to four people in the kitchen, and two to three out front serving. It would be advantageous to have more. The kitchen is where we’re having trouble finding qualified people.”

Kruger said he’s posted four to five openings on Facebook and has had some success. He said he hasn’t been super-aggressive in recruiting so far, but he’s noticed what appears to be a trend.

“Absolutely, it’s sad,” he said. “We definitely have not seen the numbers of applicants we’d like to see. People are thinking they can make more staying at home than working, and that’s not sustainable.”

“This doesn’t feel normal,” he said, “to be posting about job openings and getting zero applicants.”

Denise Anker, who owns and runs two Highway 120 eateries — Priest Station Café in Big Oak Flat and the Lucky Buck Cafe in Buck Meadows — said she hasn’t been advertising jobs at the businesses.

“I’ve been going through personal connections and word-of-mouth,” she said in a phone interview last week. “And I’ve been contacting some of my employees from the pre-COVID era. I have five employees who won’t come back. They all have excuses. Any time I contact them about working again they have excuses.”

The lack of job applicants in recent months has meant Anker has to run her businesses on reduced hours at both locations, she said, “because we can’t hire enough people.”

“We’ve experienced that,” he said. “We keep putting out announcements and programs. We do programs to help skill people up so they can get jobs, and we have programs where we put people to work and pay their salaries, but we don't have the interest right now. They’re preferring to stay home and not work.”

“We do recruiting for local businesses, too,” he said. “And they tell us ‘we furloughed people during COVID and when we call them up and ask them to come back, they say they prefer the government incentives they’re getting through unemployment.’ They get paid as much or more to stay home as they would at work. We had to shut our doors and we had rampant unemployment at the same time, so this has been a double whammy for us.”

The state Economic Development Department has a hotline employers can call if their furloughed employees are turning down re-employment offers, Thoeny said. It’s called the EDD Fraud Hotline and the number is (800) 229-6297.