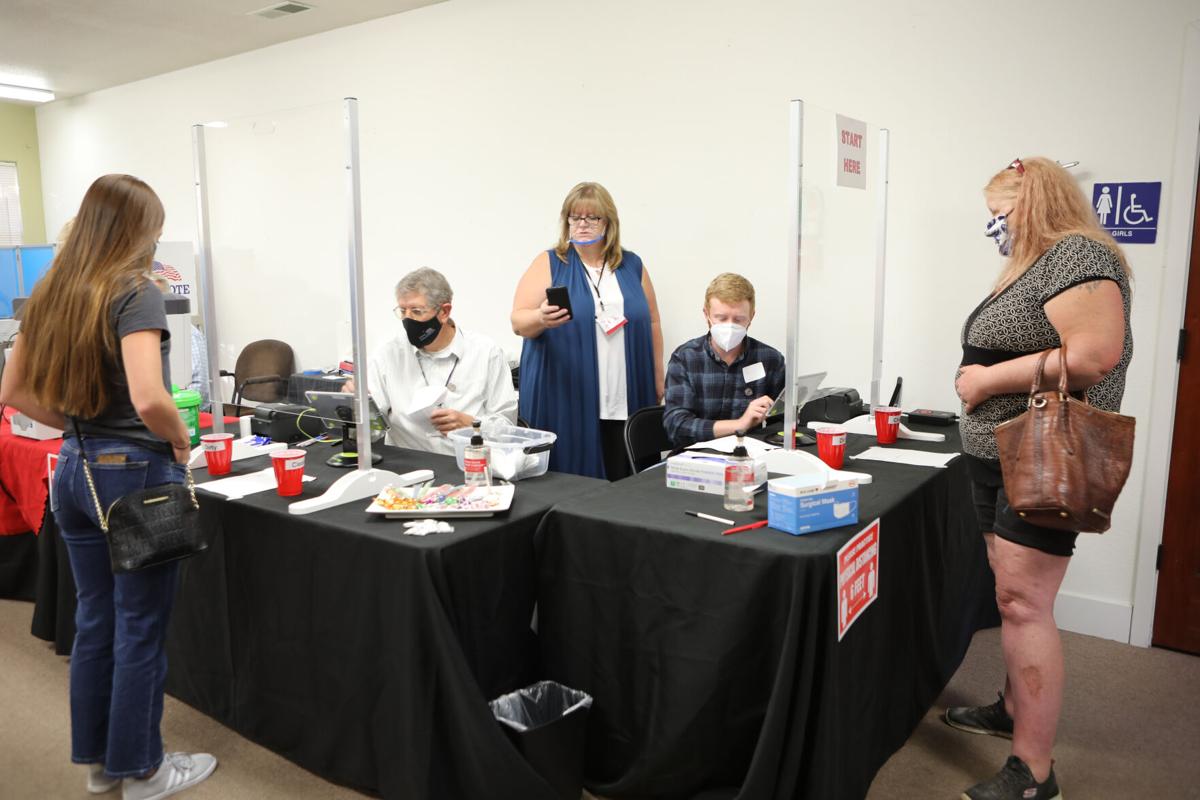 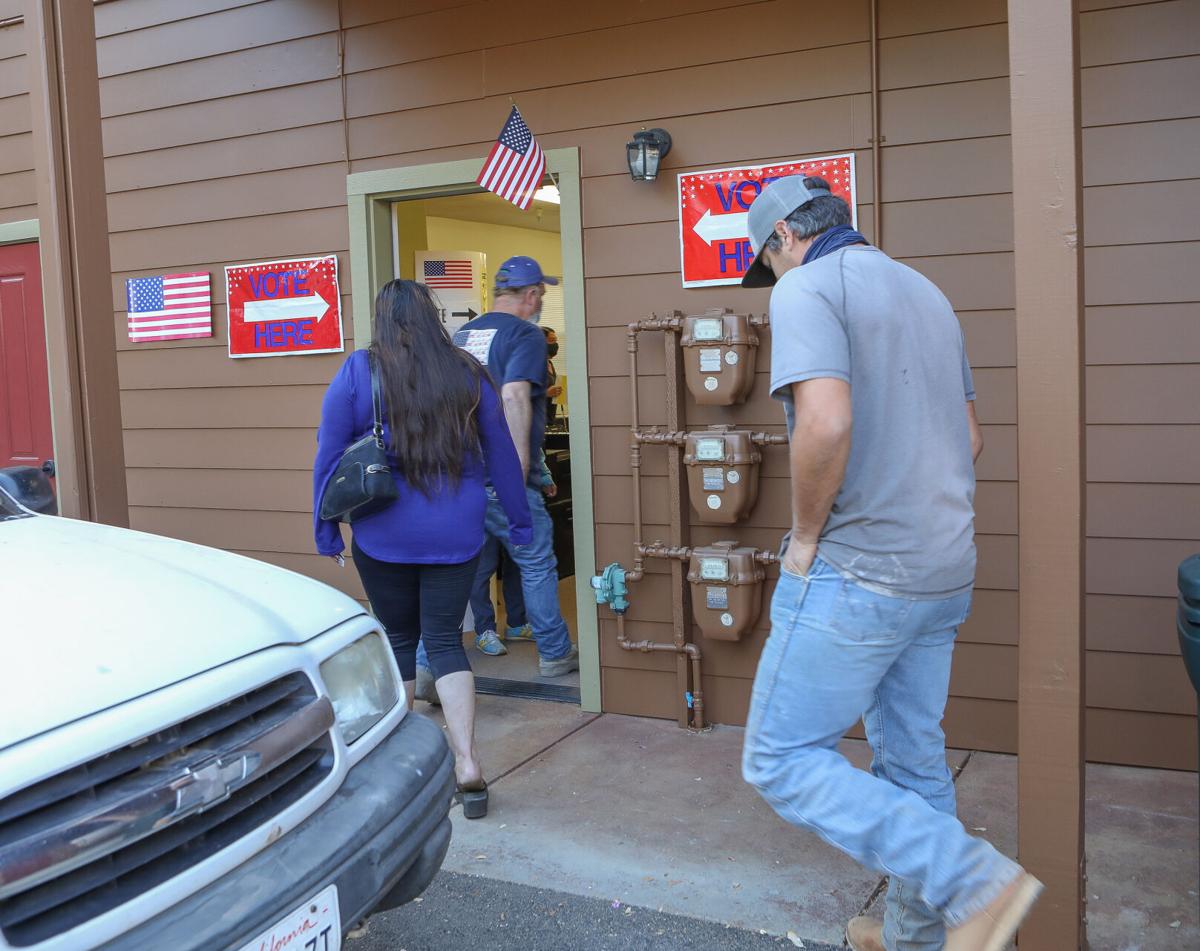 Voters make their way to the polling place on Main Street in jamestown Nov. 3rd. 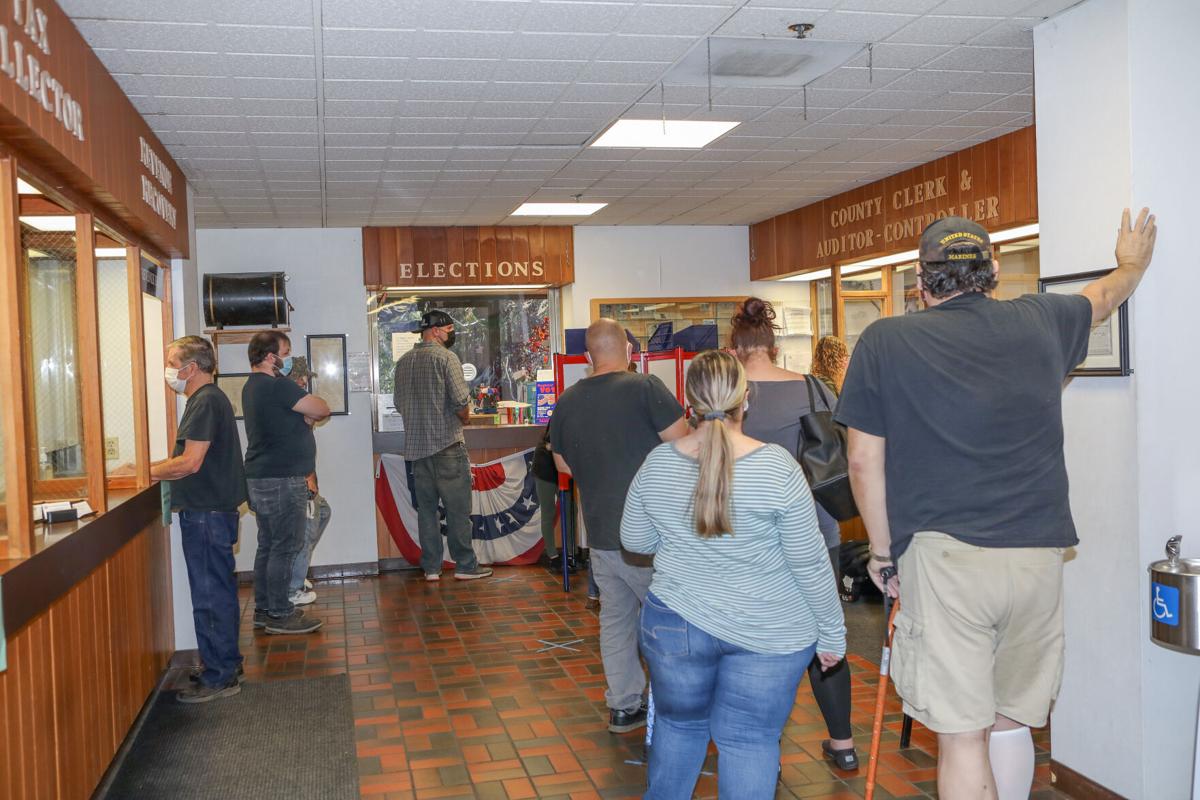 A line of people waiting to vote forms in the Tuolumne County Election Office on 2 South Green Street on November 3rd. 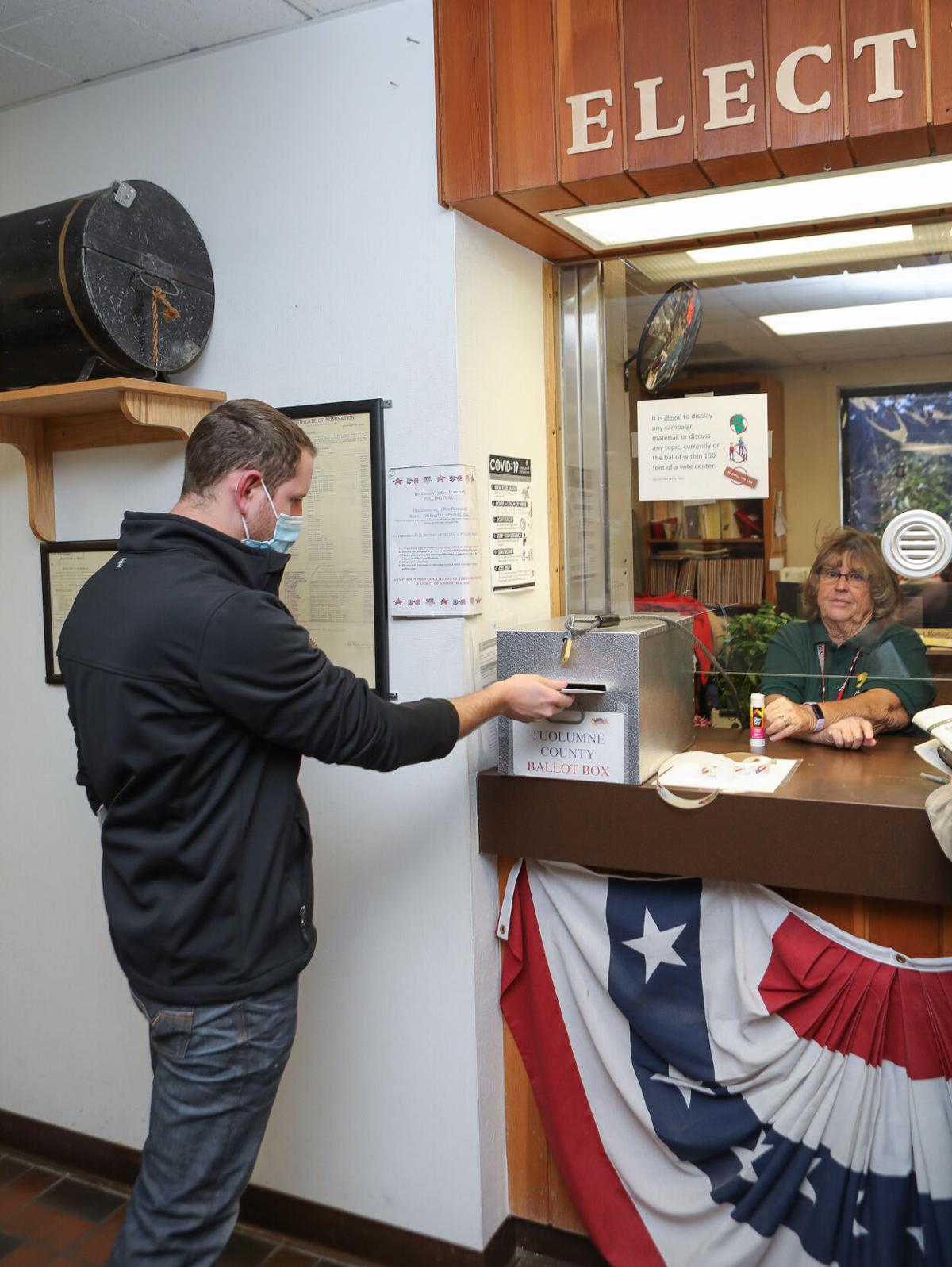 Sam Nash of Sonora drops off his ballot at the county office while volunteer election helper, Patsy Knos, looks on. Nash said he voted for Presidential candidate Biden but also voted for Tom McClintock. 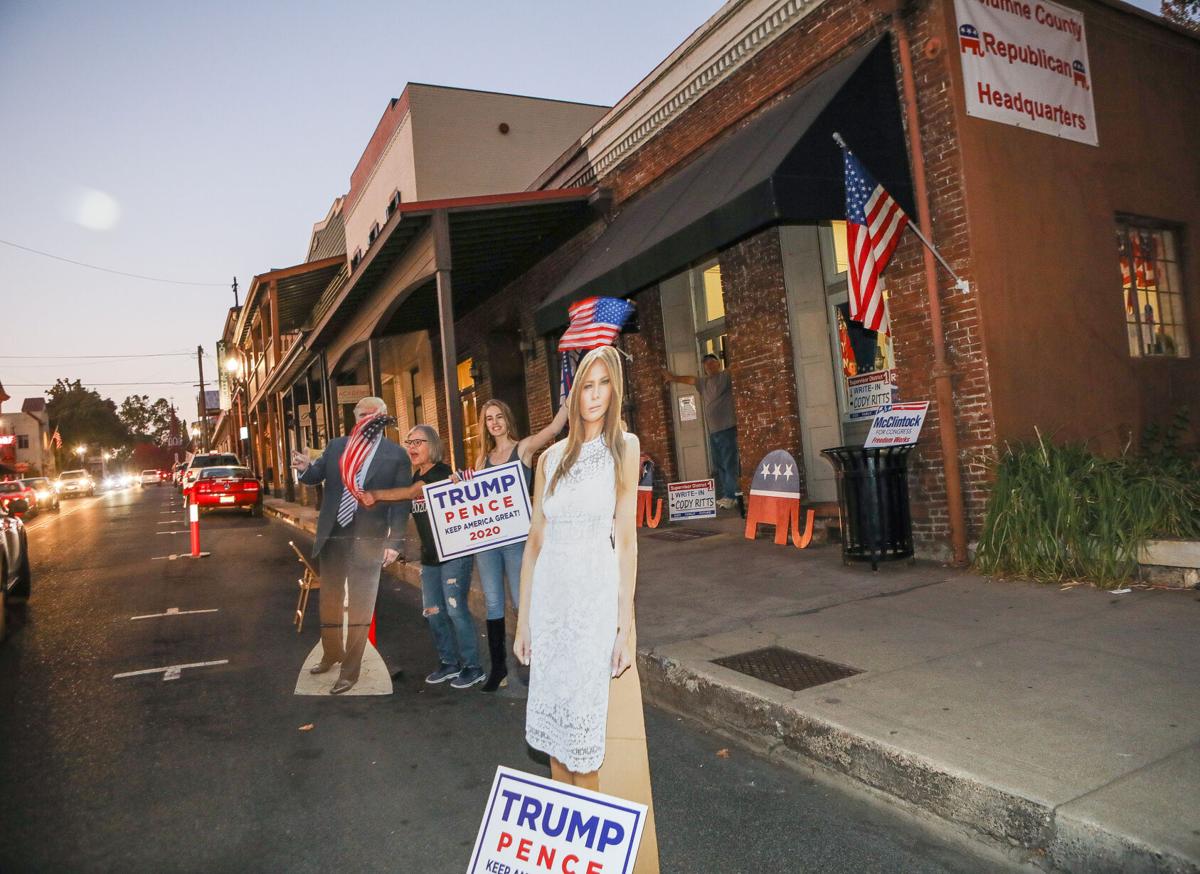 Mary Hackler, left, and Julia Van Bezey, right, both of Sonora, stump for Trump in front of the Republican Party headquarters on North Washington Street in Sonora on Nov. 3rd.

Voters make their way to the polling place on Main Street in jamestown Nov. 3rd.

A line of people waiting to vote forms in the Tuolumne County Election Office on 2 South Green Street on November 3rd.

Sam Nash of Sonora drops off his ballot at the county office while volunteer election helper, Patsy Knos, looks on. Nash said he voted for Presidential candidate Biden but also voted for Tom McClintock.

Mary Hackler, left, and Julia Van Bezey, right, both of Sonora, stump for Trump in front of the Republican Party headquarters on North Washington Street in Sonora on Nov. 3rd.

A steady line of voters, completed ballots, and a likely record turnout kept elections workers and volunteers focused all day Tuesday at 2 S. Green St. in Sonora, as more voters converged on the voting center at the Wilson Realty Building at 18125 Main St. in Jamestown to cast their ballots on Election Day 2020.

Dina Sulprizil, 50, and Julia Van Bezey, 23, came from Soulsbyville to vote in downtown Sonora at the county elections office headquarters.

“I don’t like the mail-in voting,” Sulprizil said before 4:30 p.m. Tuesday at the entrance to the elections office lobby, while other voters stood in line waiting their turn to vote or drop off completed ballots. “I worry they could take your ballot and my vote won’t count.”

Van Bezey said she had the same perspective on early voting procedures.

“I wanted to come in and vote in person,” Van Bezey said, “because I worried our ballots might not be counted.”

One level downstairs in a central vote counting area for Tuolumne County, a team of volunteers were still busy after 4 p.m., meticulously opening ballots and inspecting them to make sure there were no marks, initials or signatures that could identify voters.

“We’ve been very busy all day,” Leonides Russell, a volunteer with the League of Women Voters and the county elections office, said Tuesday afternoon as she went through individual completed ballots. “Lots of voter activity. There’s been quite a line upstairs all day.”

“I voted between 9:30 and 10 a.m. this morning,” Sewell said. “My first time voting since I moved her from Murphys. It was quicker here because last time I voted in Murphys it was November 2016 and at the Mason Hall it was like a bum rush after sundown. This time here it was easier, it took less than 10 minutes.”

Sewell said she voted for Biden because she felt it’s the fastest way to get rid of the division among partisans here and across the nation. She said if Biden wins, she also plans to vote Biden out in four years.

Her fiancé, Britt, is a firefighter with the Stanislaus National Forest, and she was bothered by the president’s criticism of California and its handling of another devastating fire season in mid-October.

Lee Freeman, 52, of Jamestown, stopped before he went into the voting center to proclaim he planned to vote for Trump. Asked who he would vote for in the race for Tuolumne County supervisor in District 5, Freeman said, “Oooh, I’m undecided. But I’m looking forward to this and I’m happy with the voting results I’ve seen so far today.”

Judy Isaman, 80, of Shaws Flat, said she’s voted in every presidential election since she voted for John F. Kennedy in 1960.

“I like to go vote on voting day like you used to do,” Isaman said outside the voting center. “I thought the early voting and mail voting was complicated.”

Asked who she voted for in the District 5 supervisor’s race, Isaman said, “I voted for the boy. I lost one of my sons recently and I’ve had trouble getting things done at the cemetery, Jamestown City Cemetery. I’ve been asking Rodefer the past couple of years about getting one way signs in there. So far no progress, so I want to give the boy a chance.”

Asked how she voted for president, Isaman said, “Trump. I think he’s tried and for four years he’s been shot down. He’s been for the people, but he hasn’t been given a fair chance.”

Dana Reel, a part-time elections worker at the Jamestown voting center off Main Street, said voters had been steady at the voting center all day Tuesday.

“Voters should be very proud of the county they live in, for the turnout and for their positive attitudes,” Reel said outside the Jamestown voting center. “Everyone’s been very respectful of each other here in Jamestown, just like I’d expect from Tuolumne County neighbors.”

In Sonora, Chief of Police Turu VanderWiel said before 5 p.m., “So far, we haven’t had any issues directly related to voting or polling locations.”

There was one “peace disturbance” reported at Courthouse Square, the park across from elections headquarters at 2 S. Green St. shortly after 4 p.m. Tuesday afternoon, “but the involved parties were gone before we arrived. No indication this was related to election activities,” VanderWiel said.

Earlier in the day Tuesday, there was also a small group of less than 10 peaceful demonstrators at and near Courthouse Square, “but they kept their distance and respected voter activities,” VanderWiel said.

If there were any Election Day incidents that required law enforcement response anywhere else in Tuolumne County, they had not come to the attention of the Sheriff”s Office public information officer or the sheriff before 5 p.m. Tuesday.

“I am not aware of any incidents related to voting,” Deputy Niccoli Sandelin with the Sheriff’s Office said Tuesday afternoon.

“We have not had any incidents at all today related to the election,” Sheriff Bill Pooley said Tuesday afternoon.

Debi Bautista, the county clerk, auditor-controller, and registrar of voters since 2005, said she’s expecting Election Day 2020 to go down in history books as a record turnout in Tuolumne County.

“It’s going to be a record turnout,” Bautista said  in a phone interview just before 5 p.m. Tuesday. “It’s hard when the lines are solid and they keep coming, so it’s harder to process ballots and get them downstairs. I’m hoping at our first count tonight we will be reflecting at least 25,000 total votes cast. That includes all the ballots we’ve processed since Oct. 5.”

Bautista and her staff already know they are going to have more work Tuesday night and for several more days before the Nov. 3 presidential election results are confirmed and finalized in Tuolumne County.

“We know there’s still going to be ballots dropped off at vote centers, at ballot dropoff boxes, and the vote-by-mail ballots,” Bautista said. “The mail-in ballots, they have to be postmarked today and I have to receive them by Nov. 20.”

Bautista said she doesn’t ever remember an election night with 25,000 ballots counted in Tuolumne County. For the primary election in March, the total number of ballots cast was 21,486. In November 2016, the entire turnout for Tuolumne County was 26,404.

She estimated she and her elections office staff will receive another 3,000 to 8,000 ballots later Tuesday night and after Tuesday.

“All the dropoff boxes, all the vote center ballots, will be brought in tonight, and mail from today will come in tomorrow,” Bautista said.

Bautista also said she’d heard of no incidents of voter harassment or voter intimidation anywhere in Tuolumne County. She said there is an observer from the Secretary of State elections office who has been visiting voting centers in the county all day Tuesday, and that person had not contacted Bautista or her staff with any issues all day.

“I want to thank the citizens of Tuolumne County for taking their responsibility of voting seriously,” Bautista said. “And thank you for the turnout.”