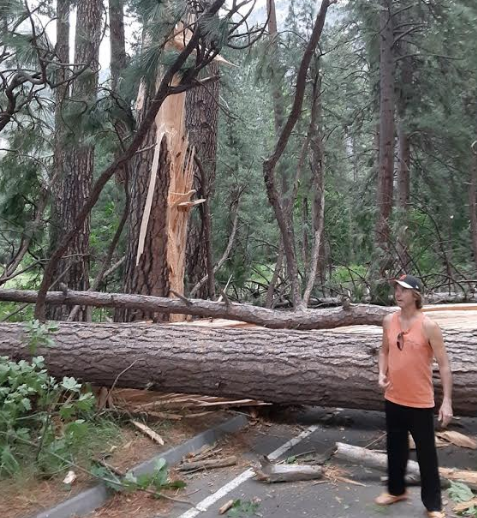 Dan Courtney, a resident of Tuolumne County, stands next to a downed tree on paved road in Yosemite Valley near Ahwahnee Meadow, on Thursday evening in the wake of a wind storm that toppled multiple trees in Yosemite Valley. 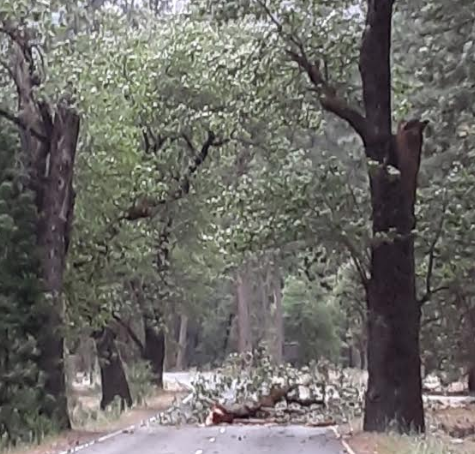 Dan Courtney, a resident of Tuolumne County, stands next to a downed tree on paved road in Yosemite Valley near Ahwahnee Meadow, on Thursday evening in the wake of a wind storm that toppled multiple trees in Yosemite Valley.

Fast-moving storm cells that brought a thunderstorm to Sonora on Thursday evening also unleashed winds that downed trees in Yosemite and coincided with at least one power outage that left more than 100 customers without electricity most of the day Friday, meteorologists in Reno and Hanford said.

Earlier in the day and further east, “healthy storms” were active on the Central Sierra crest from Tioga Pass to Tuolumne Meadows, between 2 p.m. and 5 p.m. Thursday, said Chris Smallcomb, a National Weather Service meteorologist in Reno.

There were also trees damaged in the Hetch Hetchy area during another storm about 6 p.m. to 6:30 p.m. Thursday, said Andy Bollenbachar, a NWS meteorologist in Hanford.

At 7 p.m. Thursday, instruments measured a 59 miles-per-hour wind gust at 6,634 feet elevation near the Crane Flat junction of Highway 120 and Big Oak Flat Road inside Yosemite National Park. That storm was separate from the earlier one in the Hetch Hetchy area, Bollenbachar said.

As of 3 p.m. Friday, about 115 Pacific Gas and Electric customers were without electricity along Highway 120 between Rainbow Pool and the Highway 120 entrance to Yosemite, due to an outage that started at 8:16 p.m. Thursday. A PG&E spokesperson did not respond to questions about the cause and duration of that outage, and whether any PG&E equipment was damaged.

But Tuolumne County resident Dan Courtney, 59, said he was on the steep Four Mile Trail that starts in Yosemite Valley and climbs to Glacier Point between 5:15 p.m. and 6:45 p.m. Thursday, and he said powerful winds knocked down more trees than he could count. He said no thunder or lightning preceded the winds. He described what happened as a wind storm.

“Trees were crashing down around me,” Courtney said. “Within 200 feet of me. I was walking up the trail and heard seven to 10 trees fall, and I saw two or three trees fall. Then one fell closer to me, 150 feet, too close for comfort. I turned around and started walking down.”

Then he drove from the Four Mile Trail parking area in Yosemite Valley toward Ahwahnee Meadow and he came across trees down on a road that connects to roads to the Ahwahnee Hotel and Yosemite Lodge. He met a stranger who took his photo next to one of the trees.

Courtney said Homeland Security officers in white sports utility vehicles are working in Yosemite Valley now, and they ordered him to leave. Then he came to a temporary roadblock and another officer ordered him to stay put. He fell asleep and woke up early Friday to an officer pounding his vehicle window with a flashlight, and the officer wrote Courtney a $280 ticket for “no permit for day entry.” Courtney said his annual parks pass had expired.

Forecasters in Reno and Las Vegas on Thursday tracked multiple thunderstorms that began forming in unstable weather systems over Nevada and then marched east over the steep Eastside Sierra to unload winds and rain.