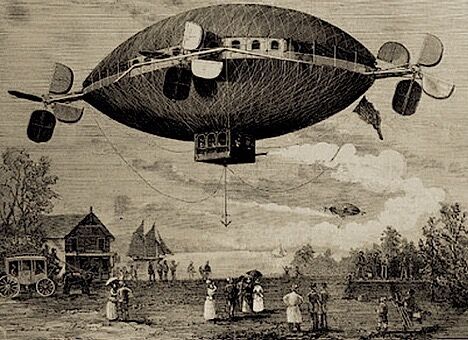 Simerley sought to find some rational conclusion to the historical record, noting the "remarkable similarities" between a proposed aircraft invention a year before similar crafts were supposedly spotted in 1896 above California. 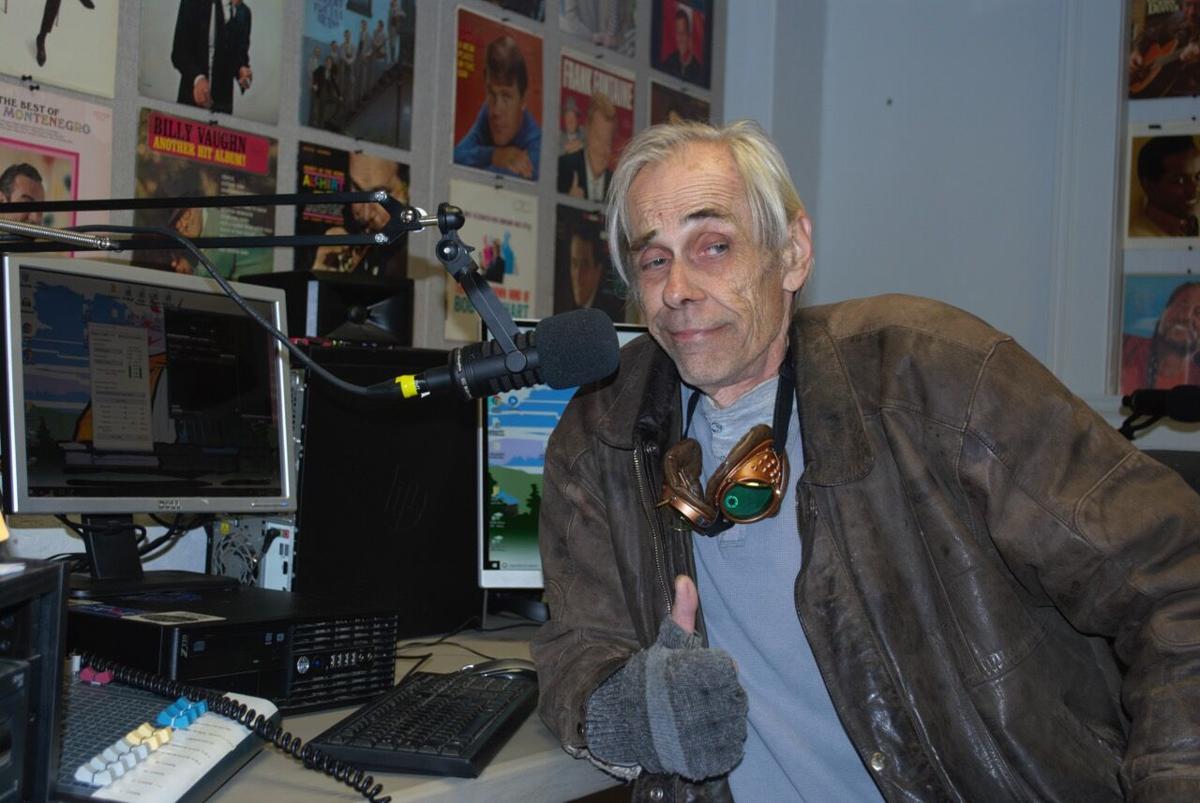 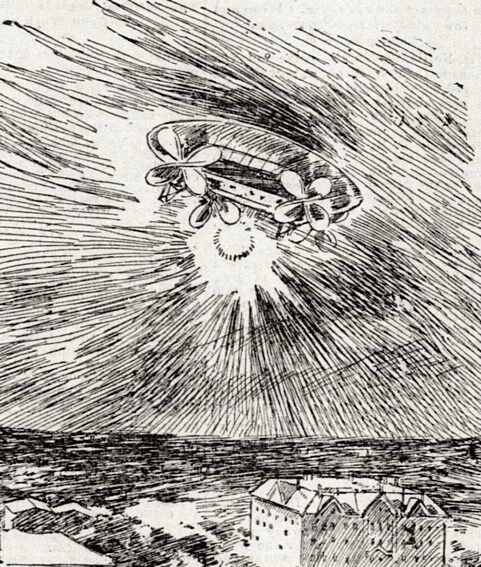 A grainy drawing of a dirigible with propellers above the sun and Sacramento appeared in a San Francisco newspaper in 1896 as one of the first sightings of a phantom airship in California. Some credit a mysterious cabal of inventors known as the Sonora Aero Club as responsible for the flights. 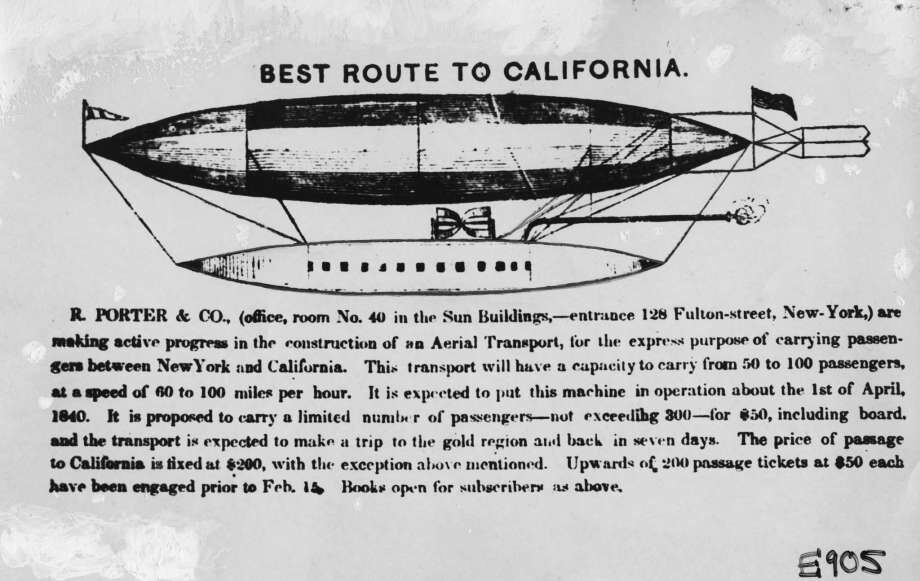 Simerley located local advertisements such as the one for "aerial transport" from New York to the Gold Country.

Simerley sought to find some rational conclusion to the historical record, noting the "remarkable similarities" between a proposed aircraft invention a year before similar crafts were supposedly spotted in 1896 above California.

A grainy drawing of a dirigible with propellers above the sun and Sacramento appeared in a San Francisco newspaper in 1896 as one of the first sightings of a phantom airship in California. Some credit a mysterious cabal of inventors known as the Sonora Aero Club as responsible for the flights.

Simerley located local advertisements such as the one for "aerial transport" from New York to the Gold Country.

Sonora community radio station programmer and board member David Allen Simerley has his own stories about encounters with unidentified flying objects.

About 20 years ago, a mysterious aircraft buzzed downtown Sonora and shook Simerley’s Stewart Street home like the "beginning of Star Wars," he said. He also once saw strange lights dancing erratically in the sky above the woods.

However, when it comes to popular theories that such aerial phenomena are visitors from another planet, Simerley said he considers himself “actually kind of a skeptic.”

“Once you research it, you find out all of this is totally possible," said Simerley, 68 of Jamestown. "What got me interested was the government's upcoming release of an official unclassified report on UFO phenomena. I knew Sonora had a long history with UFOs, and I decided to look into it."

The result of his research, which is limited to the early Gold Rush era and in the 1800s, is an hour-long program called the Sonora X-Files that’s set to premier on KAAD-LP 103.5 FM at the end of the month.

Strange stories that Simerley uncovered include sightings of experimental aircraft and other technological phenomena, which he said set the standard for the fascinations of the UFO and extraterrestrial fervor of our modern era, complete with sightings of mysterious aircraft with advanced technology, secret bases, cattle mutilations and alien abductions.

"We're going to examine the evidence of early UFOs in the Gold region, specifically Sonora and bring in other pieces as they relate and try to offer possible explanations of the phenomena," he said. "I start off very mysterious and imply UFOs, but by the end of the show I'm kind of saying there is a more rational explanation for this stuff. But I have fun with it."

Simerley delves into a few historical subjects in the show such as Rufus Porter, who advertised an "aerial transport" resembling a board and a zeppelin from New York to the Gold Country.

There was also Charles Dellschau, a supposed member of the Sonora Aero Club, a clandestine group of flying enthusiasts and inventors who are credited with possibly being responsible for a spate of sightings of phantom airships over California between 1896 and 1897.

"It is not far-fetched that there was such enthusiasm about airflight at the time that these couldn’t be an explanation," Simerley said.

The history of air travel and aviation is often convoluted dating back to kites in Ancient China to proposed inventions by Leonardo Da Vinvi to hot air balloons to bird and bat-like aviation constructions in the 1800s. A record of sustained air flight is credited to Orville and Wilbur Wright in Kitty Hawk, North Carolina in December 1903.

But the subject matter does get freakier — less about human innovation and more about supernatural phenomena — with the inclusion of an audio recording by a local man named Jake Jackson, which Simerley said describes his eyewitness account of three saucers landing on a hill above Sonora and people exiting the crafts.

"I'm not sure when the sighting was," Simerley said. "They started recording in 1971 and stopped in 1991, but some went back as far as 1949. Every one in the collection has a date on it except for this one.”

Though Sonora lacks some of the other characteristics of known UFO or alien hotspots, like kitschy memorabilia stores, it has been a focal point of supernatural research and phenomena in California for decades.

According to True People Search Insights, a website that compiles scientific data for newsy-entertainment articles and graphics on the internet, Sonora ranks fifth in the entire nation for cities with the highest frequency of UFO sightings. The analysis is based on information from the National UFO Reporting Center Database of 80,000 reports between 1910 and 2014, the article said.

The most common sights nationwide are of lights, the article said, but the UFO shapes can range from fireballs, triangles, disks, spheres, cigars, cylinders, chevrons, cones, crosses and many others.

Some skeptics point out the relatively small size of the towns included, with others noting their proximity to military bases.

Just over Sonora Pass is the Marine Corps Mountain Warfare Training Center, and Sonora is also not that far away from the Beale and McClellan Air Force Bases to the north.

The local reports are common, numerous and strange to conceive.

One from Jamestown on Feb. 23 of this year notes a triangle shaped UFO at 3:57 p.m. alleging a contact with someone from the star cluster Pleiades, 17.5 million light years away.

"Lacy is here. She is a avatar. She made contact earlier, but I failed to report it," the post said.

Another from Groveland on June 17, 2020 reported a five-minute trail of lights  at 4:16 a.m. heading toward Nevada.

One from Sonora in April 2008 reported seeing a grey translucent being studying flowers in his garden and, the next day, a sweeping white light across the sky.

A video posted on the video-hosting website Dailymotion purports to show a "Huge Glowing UFO over Sonora, California" in a gray, grainy video and a time-stamp of Sept. 21, 2008.

The TV show UFO Hunters also visited Sonora in 2009 and filmed an episode where they spoke with people who had their own sightings and filmed amateur video.

An undated Union Democrat article by reporter Chris Caskey also notes 24 UFO reports in Tuolumne and Calaveras County dating back to 2008, according to the Mutual UFO Network (MUFON), a non-profit organization which studies UFO sightings.

At that time, James Ingram, then 81 of Jamestown, was the latest local field investigator for MUFON, cataloging, investigating and reporting on UFO sightings in the Mother Lode.

Though Ingram told The Union Democrat many of the reports can be eliminated by checking online data, there are still some without explanation, like a Tuolumne man who claimed to see a bright orb in his room at night communicating with him telepathically.

Even earlier, according to a short article buried on page 12 of Section B of the New York Times on Dec. 12, 1983, Sonora real estate broker Marvin Taylor housed a UFO museum in three rooms above his downtown Sonora real estate office and brought in between 50 to 100 people to the museum each weekend.

"The museum's atmosphere is set by wall paintings that depict scenes such as the space shuttle in orbit and two U.F.O.'s landing in a field in the Middle West before an awestruck farmer," the article said. "The exhibit includes pictures of aliens based on descriptions of people who said they had seen them. The creatures resemble some of the malformed guests that populated the '’Star Trek'’ television series."

The museum included a life-size reproduction of television alien-star E.T., display boards and tape recordings of sightings, the article said.

"He had a UFO movie with Rod Serling narrating," Simerley said. “It was 50 cents to enter. A lot of his research, alot of ufologists used his material. He was pretty well respected."

In it, Taylor seeks to quash any suspicions that he is some kind of lunatic.

''I'm president of the Tuolumne County Chamber of Commerce, past president of United Way and a school board member,'' he said, quoted in the New York Times. ''I was raised in a Catholic family, had a normal childhood, played sandlot baseball and built model airplanes.''

Taylor said his fascination with UFOs and aliens began as ''an overwhelming curiosity" at a young age and morphed into a full-time hobby.

The Columbia College Claim Jumper publication also ran a short article on Taylor’s museum in April 1983 that cited the location as 111 S. Washington St.  and noted he was the assistant state director of the Northern California chapter of the Mutual UFO Network (MUFON), as well as a special investigator for the Center for UFO Studies (CUFOS).

According to his obituary in Union Democrat records, Taylor died in 2012 after serving in the Army and owning Taylor Realty in downtown Sonora.

Earl Grey Anderson, chief investigator and assistant state director for the Southern California branch of MUFON said he was unfamiliar with the Marvin Taylor or the museum, though he offered a comment on UFO sightings statewide.

“California, from Northern California all the way south, to San Diego, we have more UFO sightings than anywhere else in the world," he said. "It may have something to do with all the military installations here; also, that we’re a hub of aerospace technology …

“it may even have something to do with the clement weather in Southern California; people simply go outside more. Whatever it is, it is a well known fact. The entire state of California is a UFO Hotspot.”

Simerley produces the "Dave Allen Show" for the weekends on KAAD-LP and the "Friday Afternoon Traffic Jam" on Friday afternoons.

"The truth is out there," Simerley said.