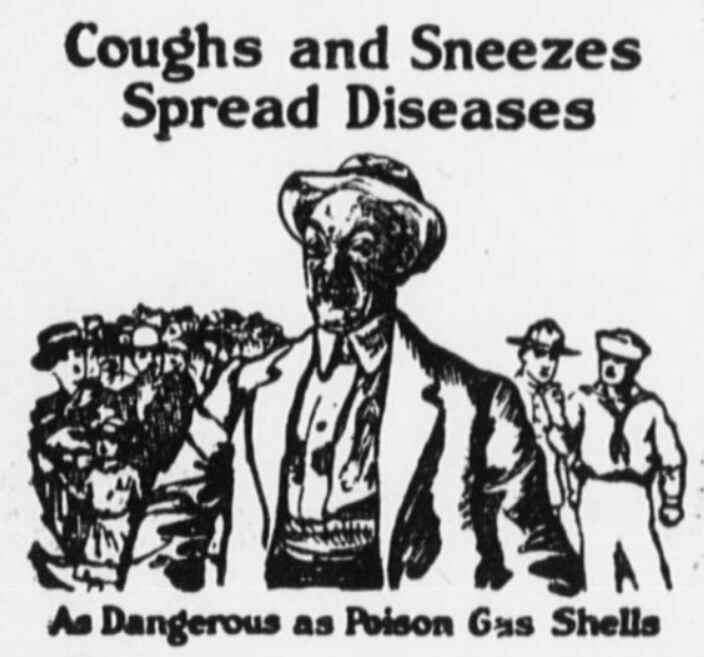 A public service announcement that was published in The Union Democrat on Oct. 19, 1918, with advice from the U.S. Public Health Service to prevent the Spanish influenza that was spreading throughout the world at the time. 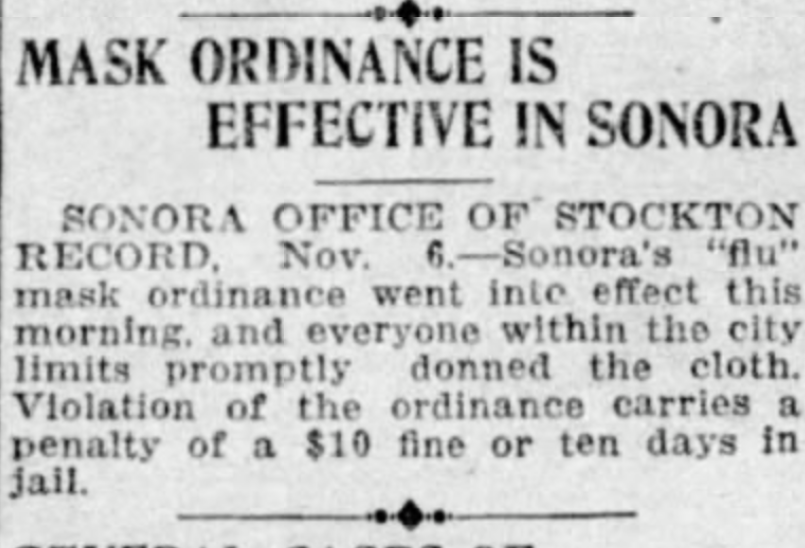 A brief published in The Stockton Record on Nov. 6, 1918, discusses an ordinance passed by the City of Sonora requiring people to wear masks in public during the Spanish flu pandemic, with a possible punishment of a $10 fine or 10 days in jail. 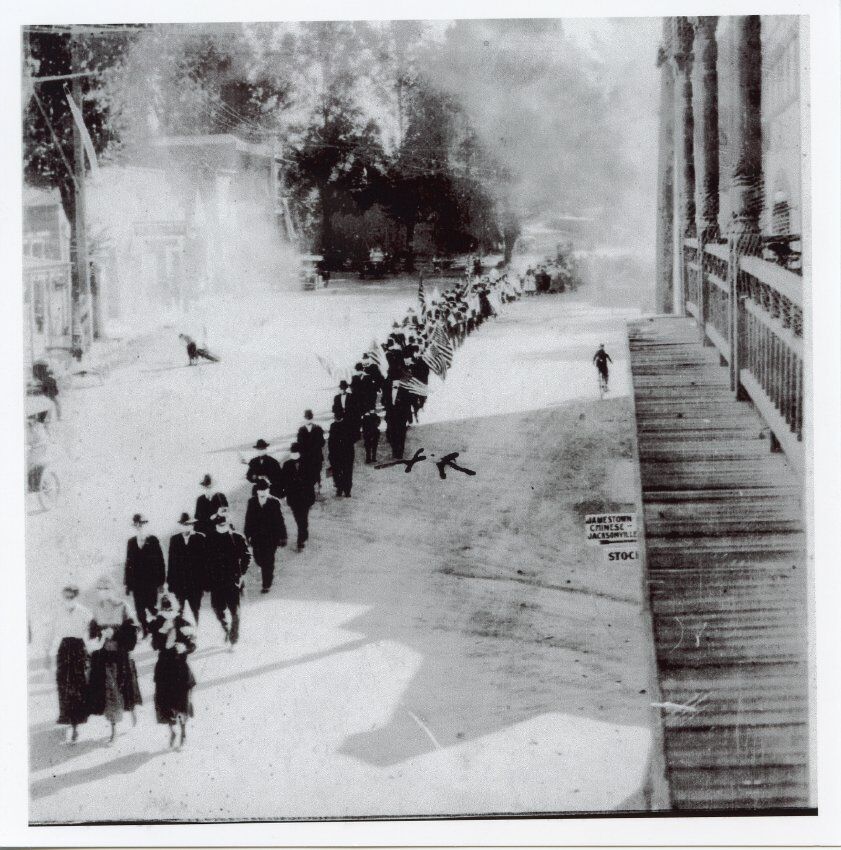 A parade on Washington Street in Sonora on Nov. 11, 1918, to celebrate the end of World War I shows people donning face masks as they were required to do when in public at the time under a local health order in response to the Spanish influenza pandemic.

A public service announcement that was published in The Union Democrat on Oct. 19, 1918, with advice from the U.S. Public Health Service to prevent the Spanish influenza that was spreading throughout the world at the time.

A brief published in The Stockton Record on Nov. 6, 1918, discusses an ordinance passed by the City of Sonora requiring people to wear masks in public during the Spanish flu pandemic, with a possible punishment of a $10 fine or 10 days in jail.

A parade on Washington Street in Sonora on Nov. 11, 1918, to celebrate the end of World War I shows people donning face masks as they were required to do when in public at the time under a local health order in response to the Spanish influenza pandemic.

Though mask recommendations and business closures during the COVID-19 pandemic may seem like Orwellian, unprecedented mandates of the modern age, a global pandemic just over a century ago prompted almost the very same response in Sonora and Tuolumne County.

"The big difference is everybody who got sick with the flu or died from it, it went in the newspaper," said Sonora historian Pat Perry of the 1918 influenza, or Spanish flu pandemic. "A man lost his wife and daughter a week apart. These people were members of those communities who were really known. People were in the prime of their life, and they died."

Today, privacy laws restrict much of what was included in the public discourse during the 1918 pandemic. The recent and tragic death of community leader Mike Ayala is one example: the outpouring of grief at his passing matched his lifetime of contributions and was even more magnified in the context of the pandemic.

During the influenza pandemic, every single day the newspaper carried not only the names of the dead, but their stories. Their deaths were more visceral and familiar as opposed to ephemeral.

"It hit people a lot more than reading about numbers,” Perry said. “I think when you know the people that died, even if you dont know them personally, you might know the name and you say that it's really terrible. I think it's a totally different feeling.”

More often than not, the deaths of COVID-19 patients in Tuolumne County are reported as ages and genders, largely anonymous and faceless to the general public.

To Perry, it is just one of the factors fueling the animus against public health measures during the COVID-19 crisis. She said another was the updates in the local economy, as well as the media sources funnelling information to the public.

Weekly newspapers and telephone handbills were subsequently replaced by radios and later TVs. Most people in the county today have access to the internet — or know someone else who does — which has a constant stream of news, in addition to misinformation surrounding the pandemic.

Perry said downtown Sonora also probably hosted between two or three restaurants at the time, as well as saloons, which has made the businesses closures appear more pronounced today.

"People were actually quarantined, and they posted a sign on your house that you're quarantined,” she said. “It was more visual in that way.”

Betty Sparagna, a member of the Tuolumne County Historical Society, wrote an article in the April-June 2018 edition of the society’s quarterly publication for the 100th anniversary of the Spanish flu that explored the details of the pandemic and its local toll.

The global influenza pandemic occured between October and December 1918, during the final days of World War I, and lasted through 1920. A third of the world’s population — then about 1.8 billion — was infected, with the death toll ranging anywhere from 12 million to 100 million due to incomplete recordkeeping.

Most people across the U.S. were willing to "implement restrictive measures such as quarantine and face masks," the article said. That was also largely true for the county, though there were some exceptions.

The county’s first death from the Spanish flu was recorded on Oct 14, 1918: Pietro Oliveri, the proprietor of the Europa Hotel.

On Oct. 20, 1918, the City of Sonora’s public health office took a step familiar to most during the COVID-19 pandemic: closing schools and theaters, forbidding public events and cautioning against gatherings.

The mask recommendations came on Oct. 23, 1918, which encouraged the public to wear masks with four layers of gauze, held by tape and sterilized in boiling water for 15 minutes. Masks were mandated with congregations of two or more people on Nov. 4, 1918, followed five days later by the closing of saloons.

On Nov. 11, 1918, the county Board of Supervisors passed its own mask mandate and put the county under quarantine.

Some flouted the rules and could be found guilty of a misdemeanor and punished by a fine of $2.50 to $10 and/or by imprisonment in county jail up to 10 days. A man named James Kelly refused to pay $5 and was sentenced to two days in jail. After he was bailed out by a friend, he was arrested again.

Drunken loggers, unable to drink in Sonora, moved to Jamestown for booze. The article indicated they were too drunk to adhere to the mask protocols and clogged the local jail.

The county began reopening by mid- to late November 1918, but there were spikes later recorded.

Andrea Anderson, the creator of the historical podcast “Queens of the Mines” about women in the Gold Rush era and beyond, has combed through regional newspapers from the fall of 1918 to locate those detailed stories of the stricken and the dead.

"We do not have to look hard to find the parallels in the past and now,” she said. “Since the Spanish influenza, there have been astronomical advances in science and medicine, and I think it would be highly irresponsible for us to ignore what has already been taught.

“In the fall of 1918, the telephone company asked the community to stop using the telephone, so the lines would be open for the doctors and emergency services. Do you think people held parades in protest? No. They wanted their community to survive, so they took all the precautionary actions they could."

The historical documentation reviewed by The Union Democrat about the Sonora and Tuolumne County areas during the pandemic does not include any claims of mask mandates being unconstitutional, but rather people who openly and flagrantly didn't do it without clear motive.

Anderson described the current opposition on the grounds of constitutional rights as misguided.

"We shouldn't have to beg Americans to do their part in helping other Americans," she said.

The death rate rose to at least 107 people (both by influenza and the subsequent development of pneumonia) in the county through the end of the 1918-20 pandemic.

Influenza, shortened to the flu, would mutate to pneumonia and kill many because there was no medical cure for the disease. The only way to protect yourself was to avoid contact with people who had it.

The county had recorded 16 coronavirus deaths as of Friday afternoon since March, with half occurring since the start of this month.