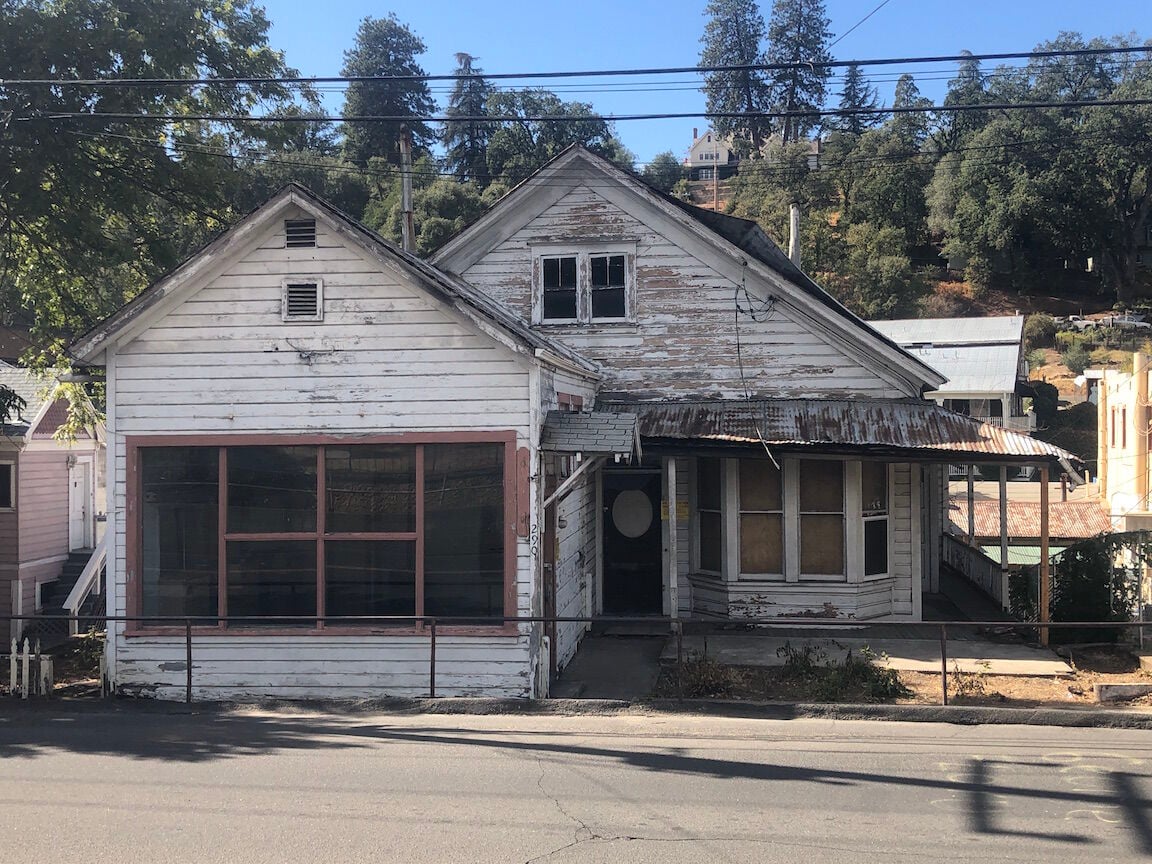 The City of Sonora bought the above property at 290 S. Stewart St. for $150,000 with money from a federal Community Development Block Grant to convert it into a new homeless shelter for between 12 and 15 people. 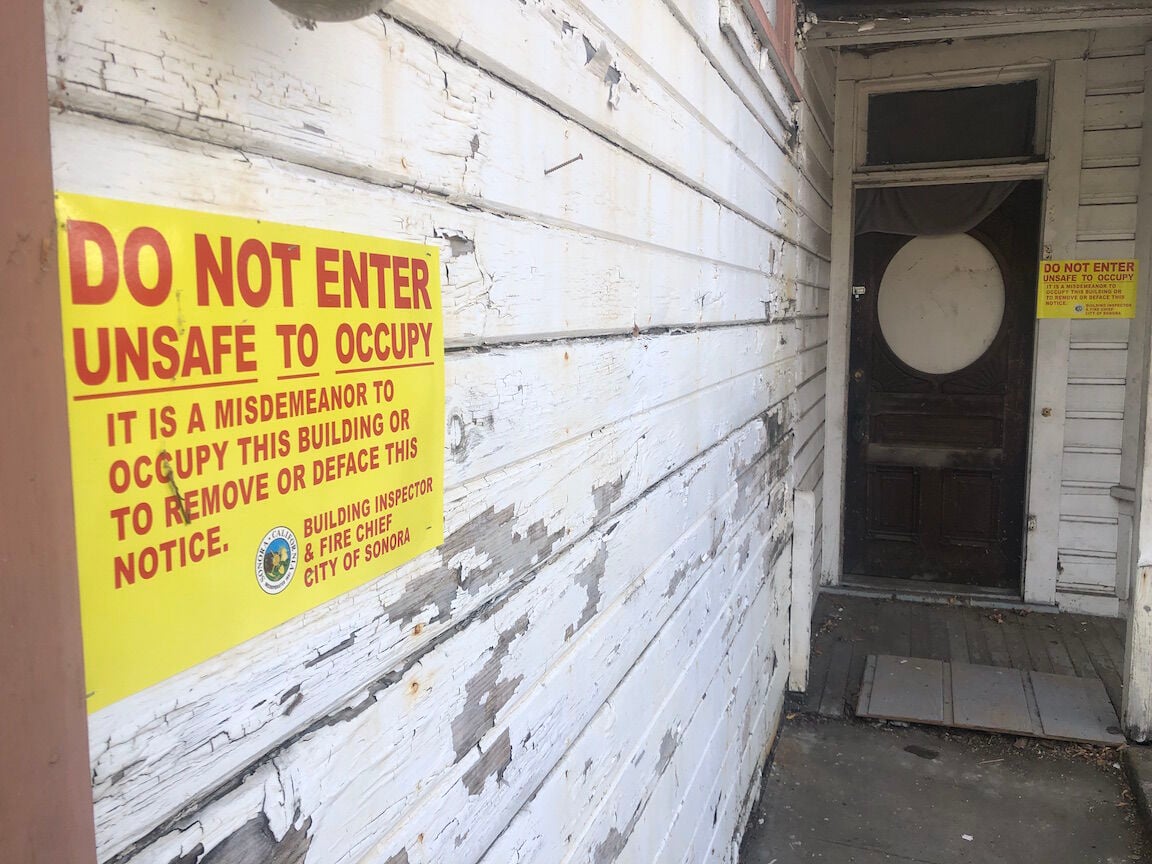 Signs warn its a crime to occupy or deface a dilapidated old home at 290 S. Stewart St. that the City of Sonora purchased this year and plans to turn it into a new homeless shelter for between 12 and 15 people.

The City of Sonora bought the above property at 290 S. Stewart St. for $150,000 with money from a federal Community Development Block Grant to convert it into a new homeless shelter for between 12 and 15 people.

Signs warn its a crime to occupy or deface a dilapidated old home at 290 S. Stewart St. that the City of Sonora purchased this year and plans to turn it into a new homeless shelter for between 12 and 15 people.

Sonora’s top law enforcement and fire protection officials are offering their support for the city’s plan to create a new homeless shelter by renovating and converting a blighted, vacant house on South Stewart Street.

The city Police Chief Turu VanderWiel and Fire Chief Aimee New both participated in a public meeting Tuesday night that was billed as a “community conversation” about the shelter plan before the Sonora City Council considers applying for grants to fund the project.

In June, the council approved purchasing a home at 290 S. Stewart St. for $150,000 using money from a federal Community Development Block Grant.

That home would be renovated and turned into a homeless shelter that could house 12 to 15 people at a time and would be professionally managed by Amador-Tuolumne Community Action Agency, which already operates a 26-bed shelter out of another home within the city.

VanderWiel explained the challenges his department faces with the growing issue of homelessness within the city and problems that it creates for other residents of the city.

In particular, a ruling in 2018 by the U.S. Ninth Circuit Court of Appeals prohibited cities and counties from enforcing bans on camping in public places unless they had adequate shelter space available.

The court ruled that preventing people from camping when they had no other place to go was a form of “cruel and unusual punishment” in violation of the Eighth Amendment of the U.S. Constitution.

As a result of the appellate court’s ruling, Sonora police are currently unable to enforce a “no-camping” ordinance that was put in place by the council first in 2014, failed to gain enough votes for renewal the following year, and then was reinstated in late 2017.

A longtime encampment formerly known as Camp Hope on the border of the city limits off Stockton Road was recently cleared out by Tuolumne County, though it was on private land that the state environmental officials had condemned as a health hazard because of former dump operations at the site decades ago.

Official homeless counts have also shown a rise in the number of people within Tuolumne County who are unhoused, from 130 in 2015 to 249 in 2019, the last year an official count was conducted due to the COVID-19 pandemic.

City Administrator Mary Rose Rutikanga noted that includes all of Tuolumne County, though they are working toward an official count for just the city. She said an informal count in 2018 or 2019 found 58 who were homeless within the 3-square-mile city limits.

Rutikanga noted that the numbers are expected to increase for both the city and county due to COVID-19 when the next count is done.

Approximately 25% of the Police Department’s calls for service are related to homelessness, which include thefts, aggressive behavior, public urination and defecation, trespassing, unlawful burning and more, VanderWiel said.

The city also has an average of 12 pedestrians hit by vehicles every year, VanderWiel said, adding that many of those are people who are homeless and have no other primary mode of transportation than walking. Some have resulted in fatalities, he said.

VanderWiel said having more shelter space available would help allow his department to enforce ordinances that address quality-of-life issues affecting everyone and hold those accountable who don’t want to make an effort at improving their own lives.

“It helps us identify those people who are willing to accept help,” he said of having more shelter space available. “That way, when it does come to us enforcing laws that are being broken by homeless individuals, whether it’s a camping ordinance or something else, we can say there’s a shelter available and they’ve been offered X, Y and Z, but it’s a life choice at this point.”

Fire Chief New said about 18% of the calls her department receives are related to homelessness, such as medical issues because they’re not getting the health care they need or calling 911 for instances that may or may not be an emergency.

One of New’s biggest concerns related to homelessness and people living outdoors is the fire danger. She said the City Council passed an ordinance against open burning in 2016, though it’s a challenge to enforce because most people are already gone when they arrive for a call about an open fire at a homeless camp.

New said the shelter would help the city and homeless encampments by providing services and beds for people to sleep indoors and “have a place to live their lives,” as well as coordinate resources for low-income housing and job training to ultimately help them be able to sustain themselves.

“The fact that we have people out in the wilderness areas in encampments cooking food, having open flame in fire season and even out of fire season is such a health and life safety hazard to our community,” she said. “Whatever we can do to try to put them in a position where they can better themselves and contribute successfully to our community, I am all on board to try to do that as much as possible.”

Joseph Bors, executive director of ATCAA, was also at the meeting to explain how his agency would be tasked with managing the shelter and providing services to ensure that it doesn’t negatively impact the surrounding community.

Bors talked about how the agency already has an emergency shelter operating within the city, which is full much of the time and hasn’t had any domestic violence issues to his knowledge and doesn’t expect there would be at the new one.

“My experience with the shelter we operate that we have not only here but the one in Amador as well, is that the shelter does just the opposite,” he said. “It doesn’t bring a problem, it solves a problem. The person defecating in a garage here may be the next person to go into the shelter.”

VanderWiel attested that his department very seldomly responds to the existing shelter for issues because it’s professionally managed, which was a large part of what gained his support for the new project.

Denise Cloward, housing director for ATCAA, said the current shelter houses about 130 individuals a year, 42% of whom are children younger than 18. The at least 12 more beds provided by the proposed new shelter would be a total of 4,380 bed nights per year, she said.

“That’s an exciting and emotional thing to say out loud, because we have so many people who call for shelter all the time … and there aren’t enough beds,” she said.

The home at 290 S. Stewart St. has been vacant for a number of years and previously housed a barbershop in the front addition. On Wednesday, it was boarded up with signs posted that bear the city’s logo and warn that occupying or defacing the building is a crime.

City officials have said that the shelter project would serve dual purposes in helping the city’s homelessness crisis and improving a blighted property.

Rutikanga said in an interview after the meeting the next steps will be for the City Council to consider approving a grant application for funds through the federal CDBG program for renovating the home, which is expected to cost under $1 million but final estimates are still pending.

Tuesday’s meeting was an informal process to introduce the public to the concept before the public hearings start, she said.

If the city is approved for the funding, Rutikanga said they would hope to get working on the renovation by next year. Funding for the ongoing management and programs at the shelter would come through grants that ATCAA receives for providing such services.

Rutikanga also noted the city does not receive a penny of the funding for homelessness that comes from the state and federal governments, all of which goes to the county and agencies like ATCAA.

“We had to be really creative at what funding sources we could use to find solutions and get something done,” she said.