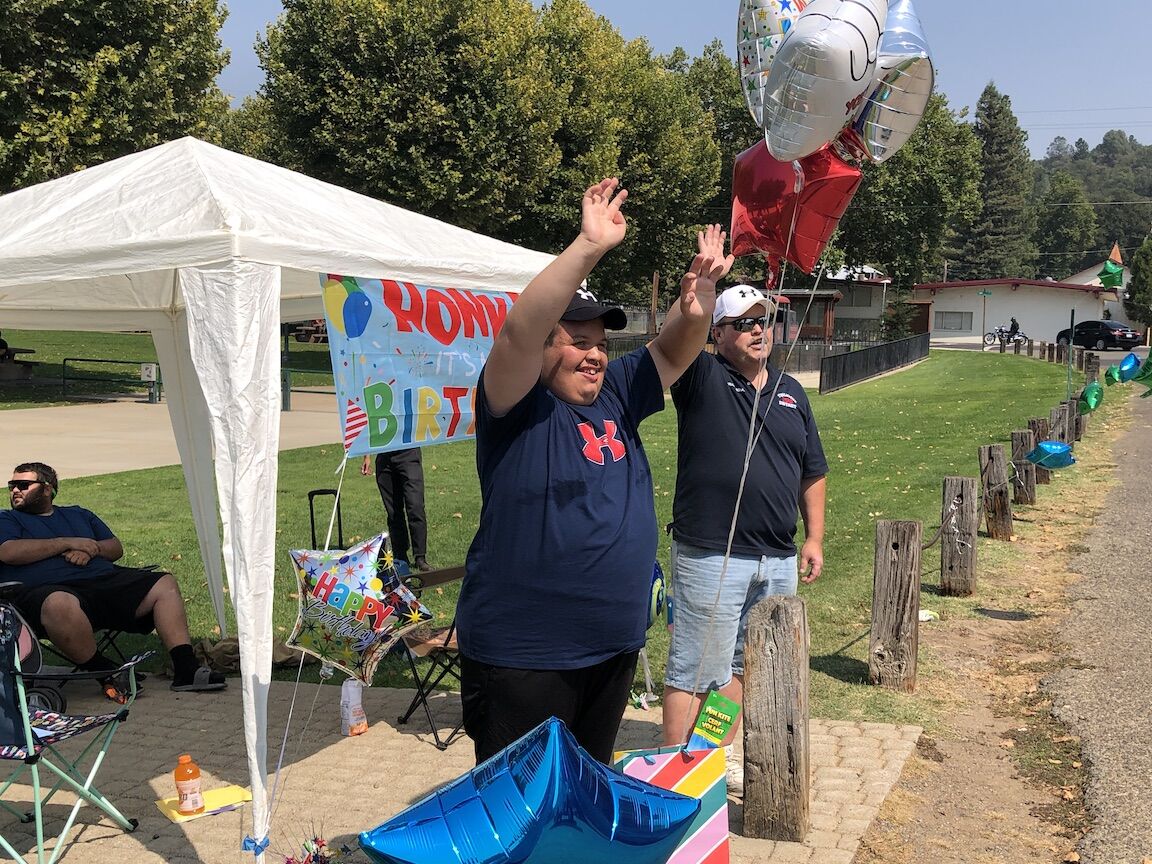 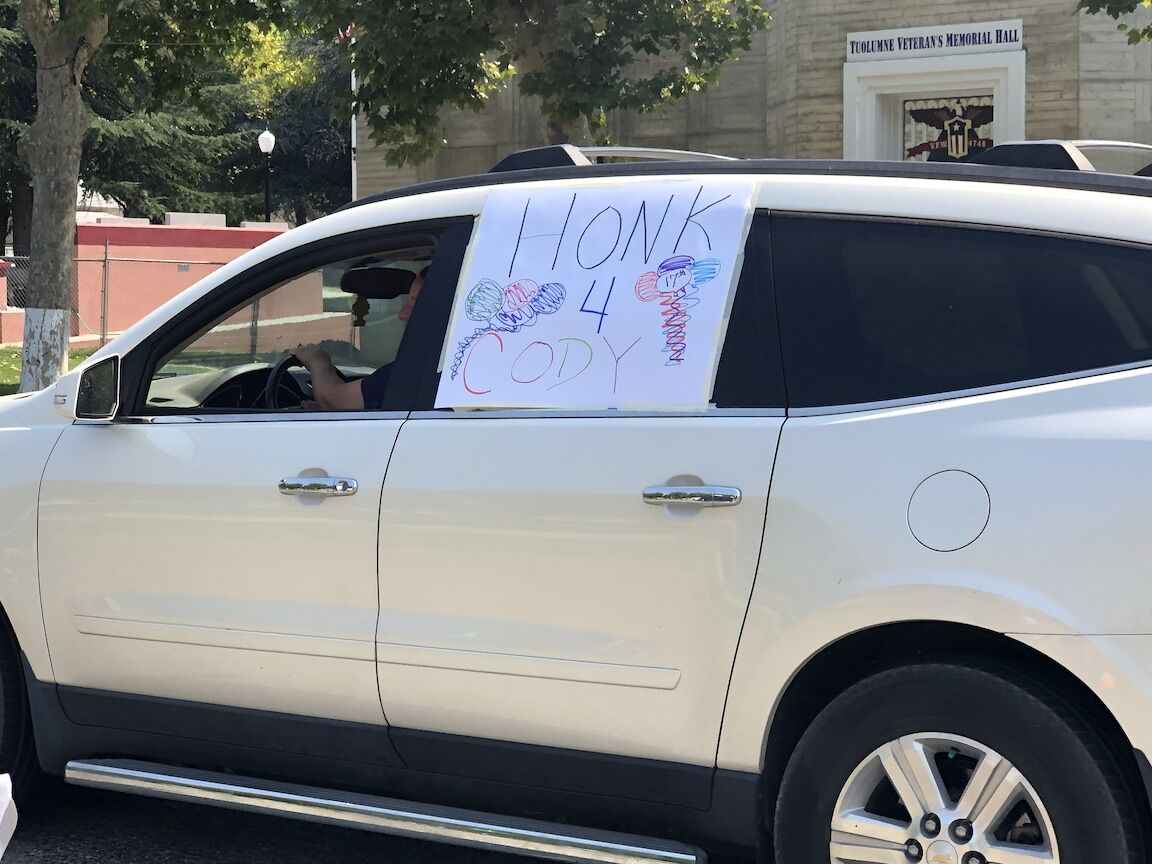 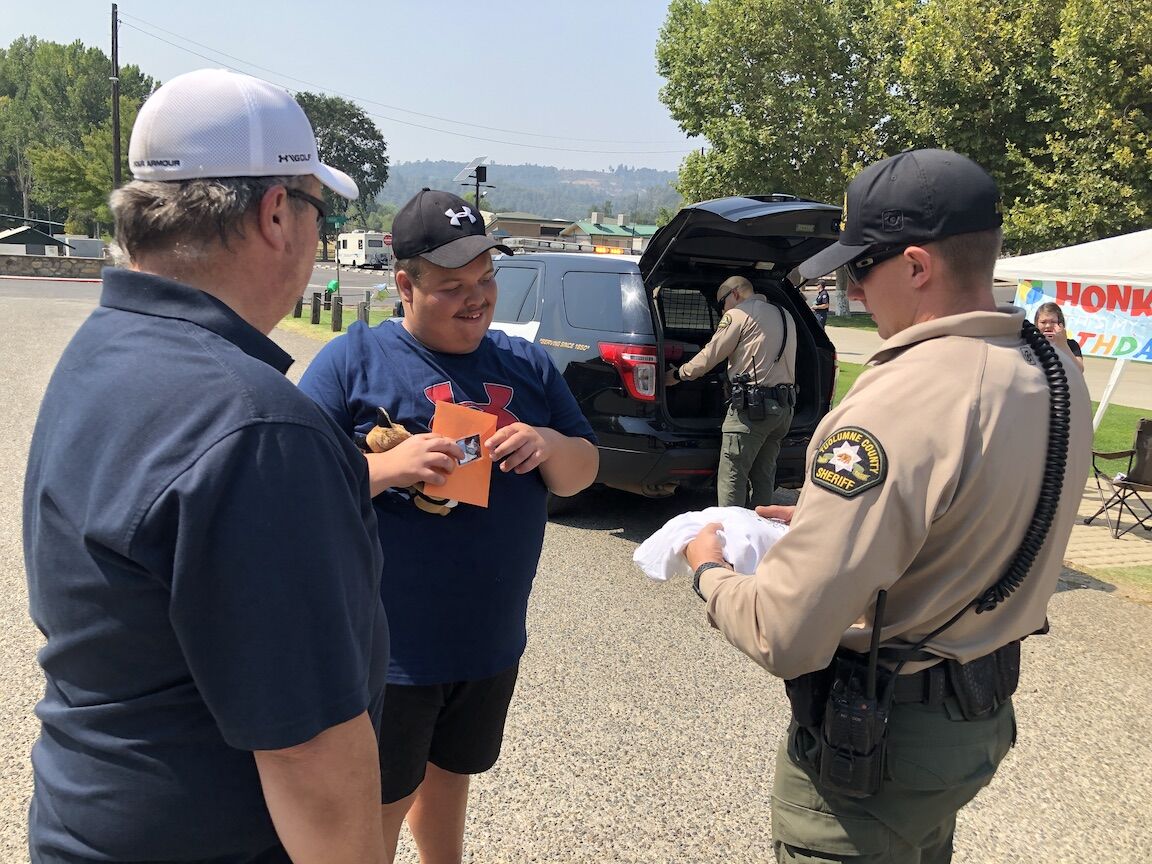 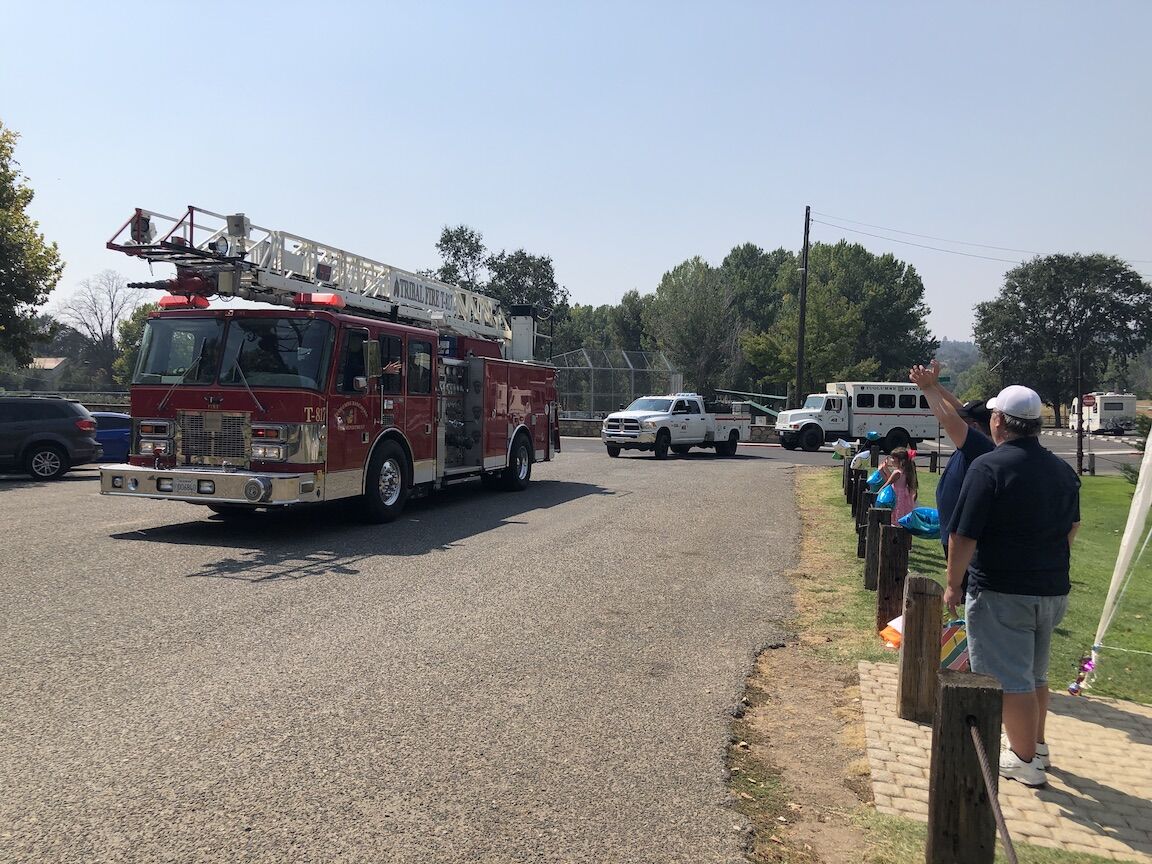 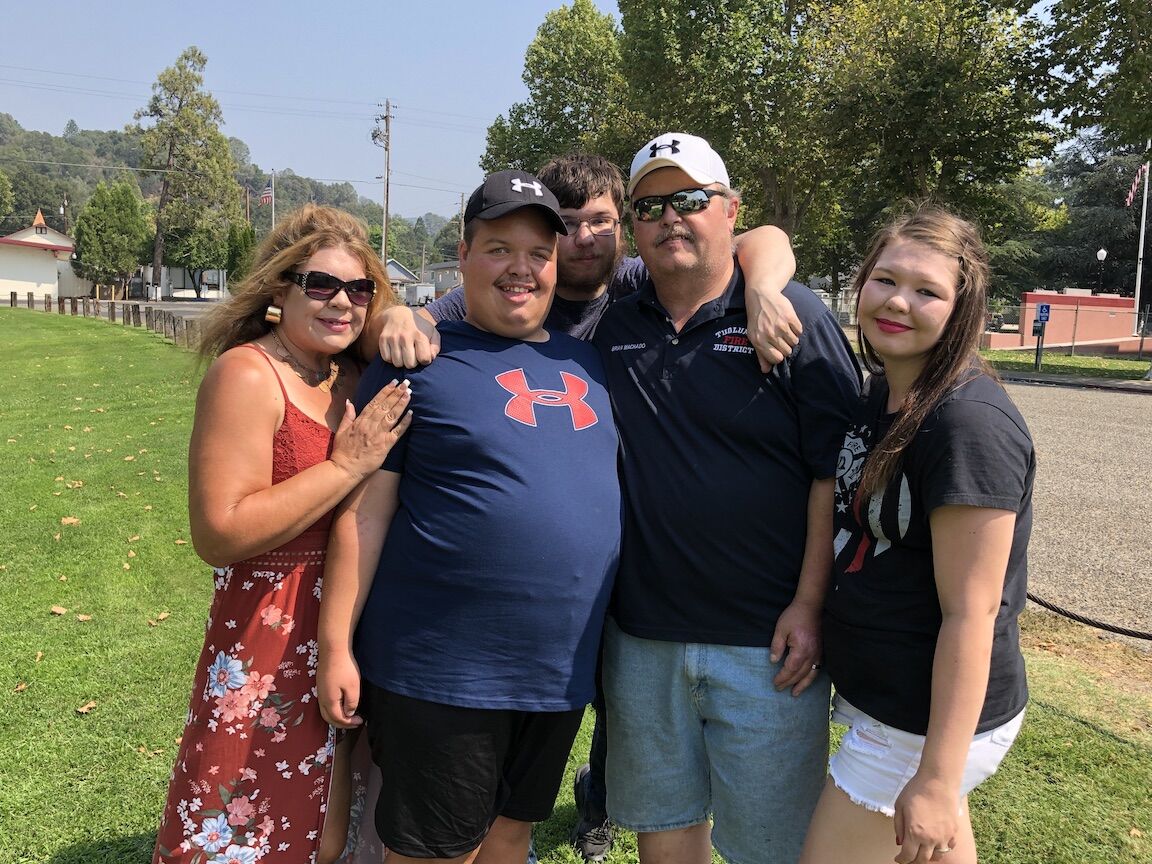 There’s a familiar saying in the town of Tuolumne: “Whenever you see Cody Machado, don’t forget to beep beep.”

On the eve of his 17th birthday during a social-distancing parade party at West Side Memorial Park in Tuolumne on Saturday afternoon, one firefighter commented to Machado, who has a rare genetic disease known as Coffin-Lowry syndrome, he may have “met his quota for the week, maybe for the month.”

“I feel good,” said Machado, a gleaming and permanent smile stretched on his face.

He is known in town – and throughout the county – for holding a sign at the corner by his house, asking for honks as emergency officials and members of the public drive by.

“We don’t forget. We do it for Cody because it’s what he loves,” said Tuolumne Fire District Chief Nick Ohler.

Diagnosed with Coffin-Lowry syndrome at 2 years old, Machado has defied the short life expectancy associated with severe cases of the disorder.

As a 9-year-old, Machado was expected to soon be bound to a wheelchair. Very few severe Coffin-Lowry syndrome patients live into their teens, much less into double-digits.

Machado was upright, buoyant and celebratory at his party on Saturday, exuberantly waving his outstretched arms at each of the 50 vehicles that passed by.

“I haven’t seen the gifts yet. I haven’t opened them,” he said.

A full length bus from VIA Trailways stopped on Fir Avenue and the driver, Jeff Best, stepped out with a wrapped present.

“This is from my company to you, thank you so much,” he said.

Next came a massive procession of the public: SUVs, motorcycles, a Kona Ice van, a bicyclist with an airhorn and a white convertible Oldsmobile Wildcat.

Many called out their congratulations to Machado by name. Some held out balloons, homemade signs and wrapped gifts. And each and every one knew what Machado liked best: Repeated blasts from their horns.

“The only way I’d miss this is if I was on a call, but I did everything I could to be here,” said CHP Officer Nick Norton, who sometimes drives Tuolumne as a part of his patrol duties.

“He’s always excited to see us. It always makes me smile inside. Even if I’m having a bad day, Cody can cheer you up.”

The Machado family said it was a testament to the community’s compassion for Cody and their own resilience as parents of a disabled child that the event came together with such vast public support.

“We wanted to have something and everyone jumped on board,” said Brian Machado, 52, a director of security at Black Oak Casino and a member of the Board of Directors at the Tuolumne Fire District.

“He’s built relationships along the years,” added Cody Machado’s sister, Kymberlee Stone, 25, who was also joined by Cody’s siblings Matthew and Adilynn. “For the most part we don’t have our own identities. We’re Cody’s sister or Cody’s brother. But we love it that way.”

“It was very emotional. I was teary-eyed and my hands were shaking when I tried to get a video,” said Cody’s mother, Mende Machado.

As of 10 years ago, only four children in California had Coffin Lowry and two of them were brothers, Brian Machado said.

The exact incidence of the disorder is unknown, but the U.S. National Library of Medicine estimates 1 in 40,000 to 50,000 people with varying degrees of severity.

Even before Cody Machado was born at Stanford Hospital in Palo Alto, doctors diagnosed him with a developmental disorder.

After his diagnosis with Coffin-Lowry syndrome came the brain surgeries. As a child, he lost many of his teeth simultaneously. Out-of-town doctor visits, specialized procedures and a range of therapeutics are now an accepted fact of the Machados’ lives.

“Even the doctors weren’t sure and didn’t have a grasp on what it was,” Brian Machado said. “Then the diagnosis was terminal. But here he is. We’re blessed. You never want anything to happen to your kid, so you take every day for what it is.”

It was the special moments of community outreach – Cody Machado visited Disneyland as a Make-A-Wish recipient at 3 years old and scored a symbolic touchdown at a Sonora High School versus Summerville High School game about five years ago – which made every moment with him lasting and remarkable, the family said.

“Every birthday is special because it’s just another year and moment with him. It can teach anyone who doesn’t have a disease a lesson about themselves. Everyone to Cody is a friend,” Brian Machado said.

The family has previously represented Make-A-Wish in Tuolumne County parades, volunteered at fundraising events and still donates to them annually.

“We didn’t know for how long we were going to have him. So we rushed to make it happen with them and we stayed with them,” Mende Machado said.

Cody Machado attends Summerville High School as a part of their special needs program. His instructor, a county special-education instructor named Jessica Paulat, who has only known him digitally for a week and a half, arrived in her car to meet him in person for the first time and offer him a homemade sign.

“I can’t wait for cake,” he said to his parents.

Kymberlee Stone turned toward him and asked if there was anything he wanted to share with the people who made it out to support and celebrate the birthday milestone.

“Thank you for coming,” he said.

In unison, his parents laughed, adding, “And keep on beeping.”