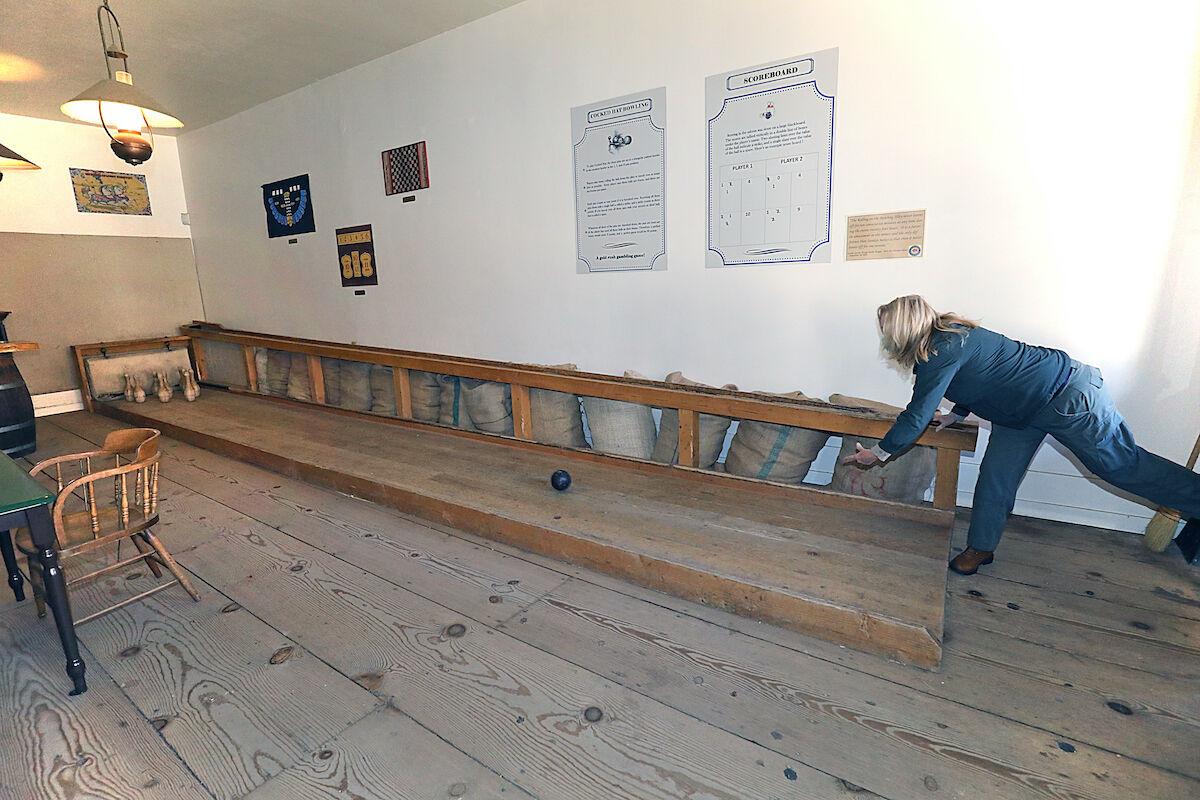 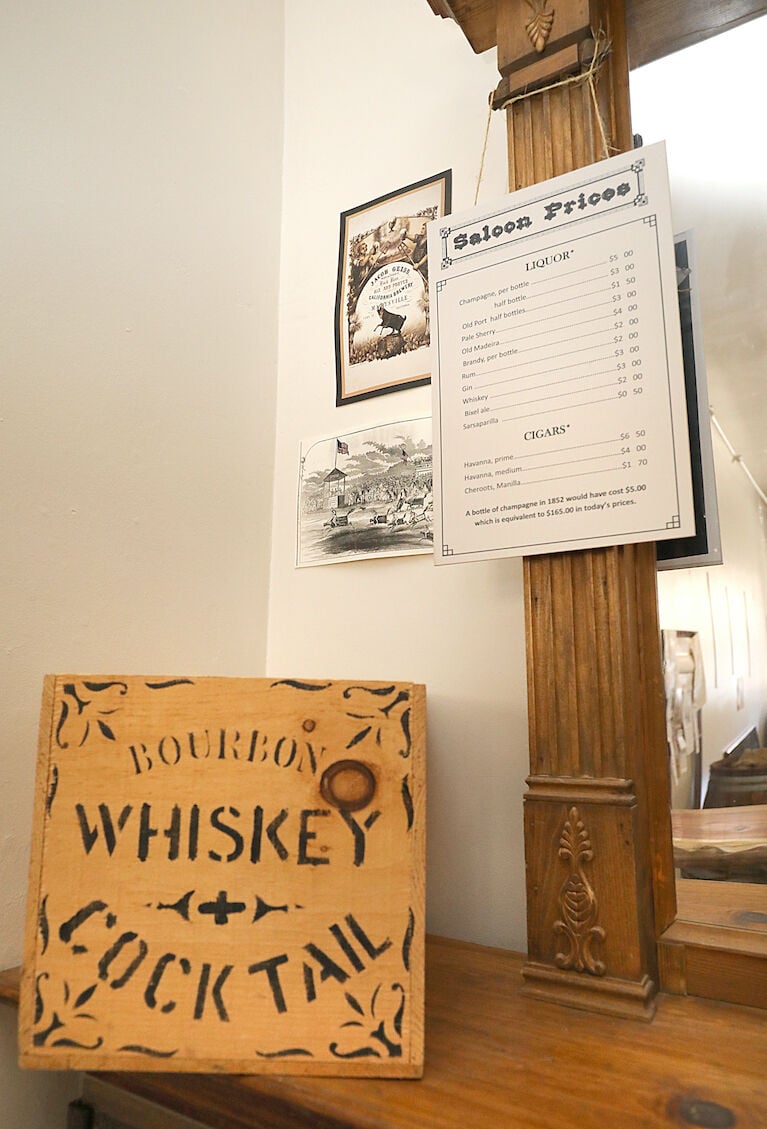 An authentic price list for beverages is located behind the bar. By today’s standards they are low but back then the drinks were quite costly. 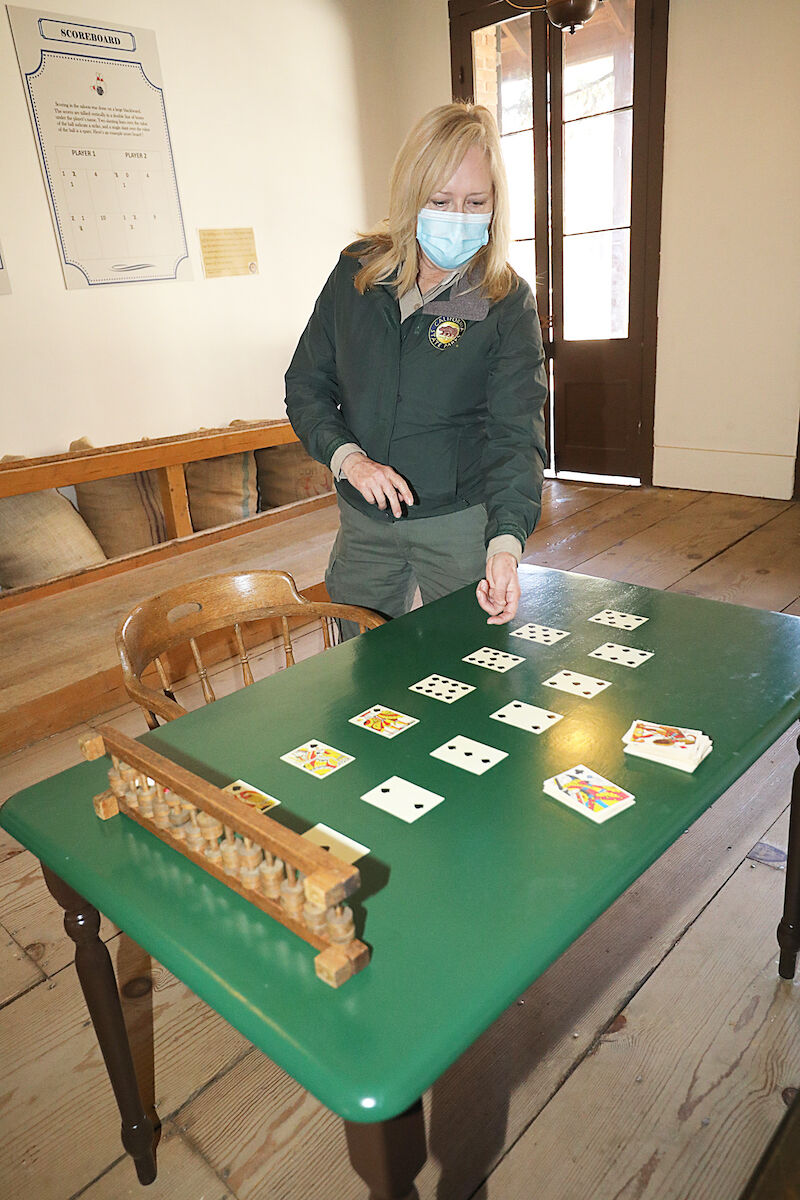 Columbia State Historic Park Interpreter, Kelly Leage, said the game of Faro was sometimes called “Pharaoh,” and the odds were in the gambler’s favor and cheating was to be expected. 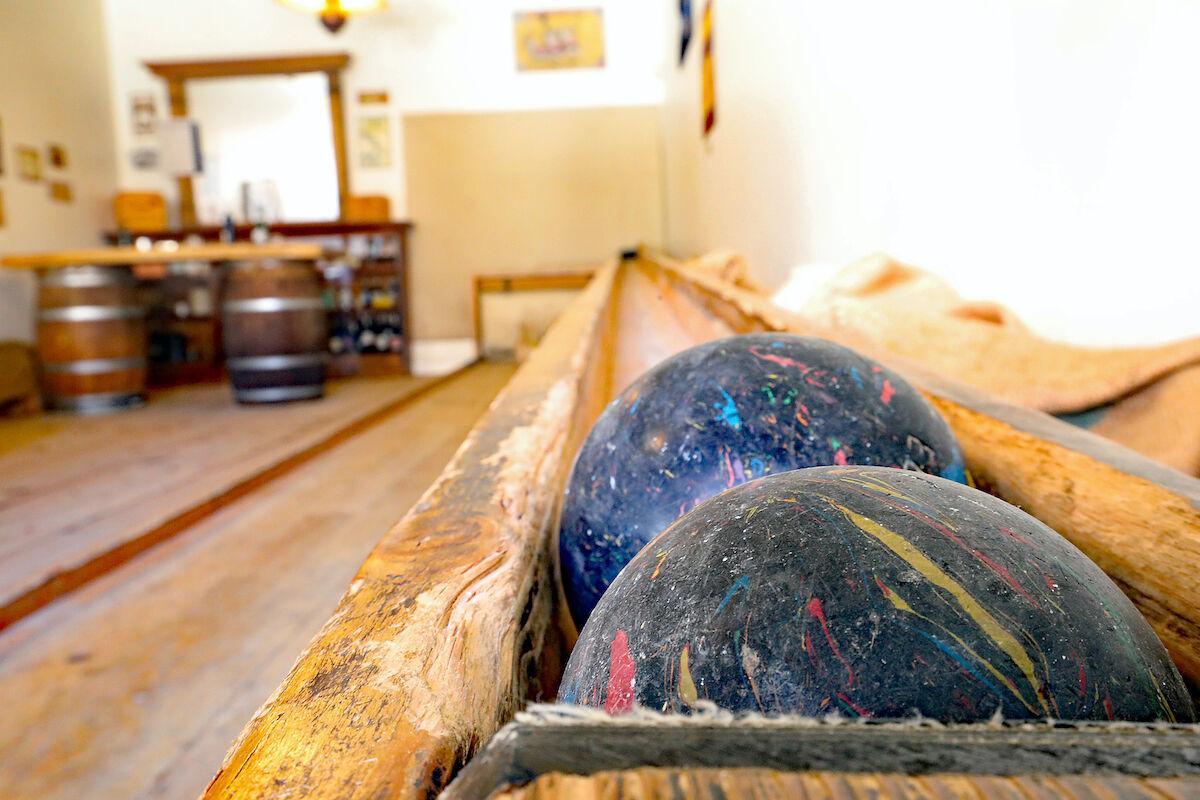 The bowling balls resting the groove near the door.

An authentic price list for beverages is located behind the bar. By today’s standards they are low but back then the drinks were quite costly.

Columbia State Historic Park Interpreter, Kelly Leage, said the game of Faro was sometimes called “Pharaoh,” and the odds were in the gambler’s favor and cheating was to be expected.

The bowling balls resting the groove near the door.

When the inside of the Columbia State Historic Park entertainment room opens to the public after the COVID-19 pandemic ends, it will look and sound as it did during the Gold Rush: staffed with revelers and filled with the repeating reverberative crashes of an authentic nine-pin bowling lane.

"Even in the rough and tumble camps, they had bowling alleys,” said Jim Miller, museum education coordinator at the park. “You'd hear it day and night. To hear them knocking down pins at the time would be very exciting. With the exhibit, you get a sense of what it would be like.”

The bowling lane has always been the centerpiece of the room, and besides a quick dusting off, it's the exact same one that has been there for at least decades, said Kelly Leage, an interpreter at the park and lead organizer of the refurbishment.

However, the entertainment room has gone through much more than just cosmetic updates over the past year. Like the bowling alley, the new features of the exhibit are meant to be interactive, whether you're standing up at the mirrored bar or sitting down at the card table.

"It's loud, it's noisy, but that's how it was back then, too,” Leage said. “During the Gold Rush, that was a part of the feel of the town.”

According to the exhibit, Columbia in the 1860s supported approximately 60 saloons for socializing and gambling that created "a town that never slept."

"With the toss of a gold coin or the roll of a bowling ball, fortunes were won and lost," it said.

Historic Columbia likely had three to four bowling alleys during the Gold Rush era, Miller said, tucked away on saloon floors or even underground in narrow basements.

"Everything we know about bowling here is based on good information," Miller said. "It was always associated with saloons, though it all depended on who was bowling.”

The saloons could at times be considered inhospitable: drenched in smoke, drink, and a whole host of debauched activities from gambling to prostitution.

The room as Leage called it, "Entertainment in the Gold Mines," is intended to have the same flavor, though with an obviously more family friendly and educational environment geared toward students learning about life and recreation during the Gold Rush.

The walls are adorned with quotes from local heros like Mark Twain, with historical photographs and game descriptions for cocked hat bowling, checkers, chuck-a-luck, hazard and faro. There's dust and soot on the sanded down floors and barrels filled with sawdust to cancel out the reverberation of the constant clatter of the pins. A display includes period piece items such as bottles, tobacco tins, glasses, barrels and jugs and handbills on the wall advertising bullfights, bear fights, and minstrel shows.

"The rolling on the bowling alley never leaves off for ten consecutive minutes at any time during the entire 24 hours. It is a favorite amusement of the mines; and the only difference that Sunday makes is that it never leaves off for one minute," reads a quote on the wall, a quote attributed to the Shirley Letters, historical documents of the California gold mines.

The game of bowling then was not as we know it today. Cocked hat bowling was a three-pin game with three rolls per frame and points tallied on a chalkboard. Nine-pin bowling was also popular, though when it was outlawed, a tenth pin was added to develop into the modern sport.

Overall, bowling wasn't a family friendly pastime, but an adult gambling game. In its older form, metal balls are palmed (no finger inserts) and rolled underhand to the beat-up wooden bowling pins on the other side of the room.

The slightly raised wooden lanes and the pins were built by docents at an unknown time to illustrate the craft, though Leage said it is not from the Gold Rush era and does not have historical significance in that way.

According to Columbia State Historic Park records, the first re-creation of Gold Rush era bowling was done in 1995 during the Columbia Diggins event.

During Gold Rush times, the lane was much longer to fill the expanse of underground saloons, perhaps two to three times as long, Miller said, though the pins and the balls in the exhibit are authentic to size.

Across the room is a refurbished faro table, affixed with a working abacus and adorned with hand-painted playing cards. A stack of handmade playing cards is on top and on the wall behind is a description of how to play faro.

Visitors are reminded that in the rough and tumble era of the Gold Rush, cheating and ruses ran rampant.

"Back then, everybody cheated,” Leage said. “The dealers cheated, the gamblers cheated. Everyone was getting creative on how to win.”

The renovation was inspired by a keen-eyed guest to the bowling and entertainment room who requested the three pieces of artwork on the walls of the room be updated to more appropriate designs for the time and function of the room.

The project was initiated in November 2019, and Leage was provided with a $1,500 budget through the Friends of Columbia State Historic Park, a nonprofit which provides financial assistance to the state park for educational activities and preservation.

But when the COVID-19 pandemic struck, all the money raised was returned because it was funded through down payments for school tours that could no longer take place. That circumstance led to an unfurling of philanthropy and adaptation, which still allowed the project to forge ahead.

Leage was returning from Murphys, still racked with anxiety about how she would complete the project without all the funding, when she saw a man sanding wood behind a barn and off the road, and she went to talk to him.

Anthony Armstrong, of Timbercraft Designs, was showing her through his items when she saw what she was looking for: a 27-inch-wide redwood slab to make the saloon bar top. Leage deferred, however, explaining to Armstrong that it would be out of her price range.

Leage recalled that Armstrong responded, "How about I just give it to you? I've always loved Columbia, and my kids always loved the bowling alley."

Armstrong later provided the varnished and sanded down bar top, which is set on barrels ahead of the display case behind it.

Up on the display behind the bar, authentic saloon prices for the era are advertised: $5 a bottle for champagne, $3 for whiskey and 50 cents for sarsaparilla.

Among other contributions was the sewing of gunny sacks by the town flute player, "Doc" John Watson. The sacks were provided by Mother Lode Coffee Roasting, Leage said.

Due to the ongoing COVID-19 pandemic, however, the bowling alley entertainment exhibit remains closed to the public.

Next year, Leage hopes to get an updated entertainment sign to adorn the outside wall of the building, which is located across the street from Browns Coffee House and Sweets Saloon and The City Hotel.