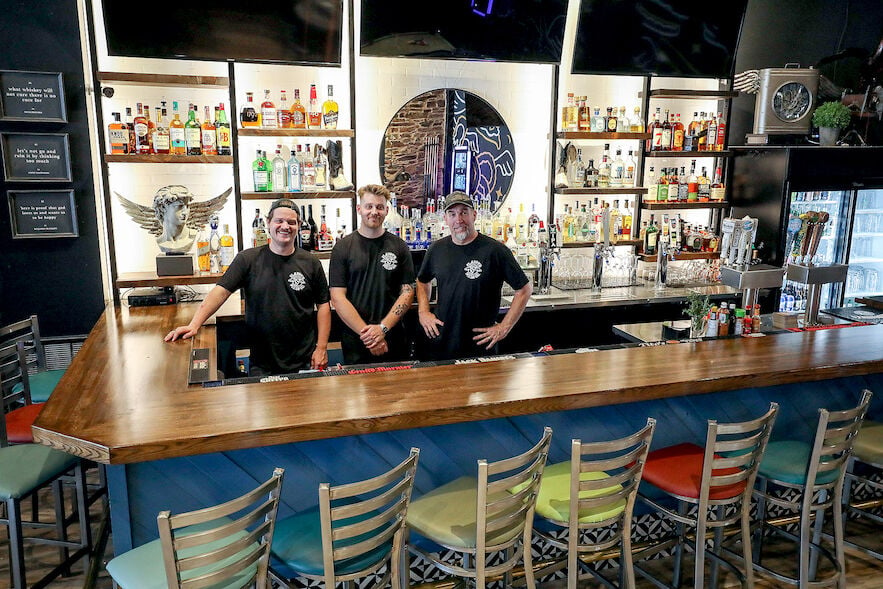 Flappy's Pizza Co. co-owners (from left) Mitchell Husong, 25, Zak Hailey, 27, and their father, Jonathan Hailey, all of Sonora, stand together behind the bar at the restaurant on South Washington Street in downtown Sonora. 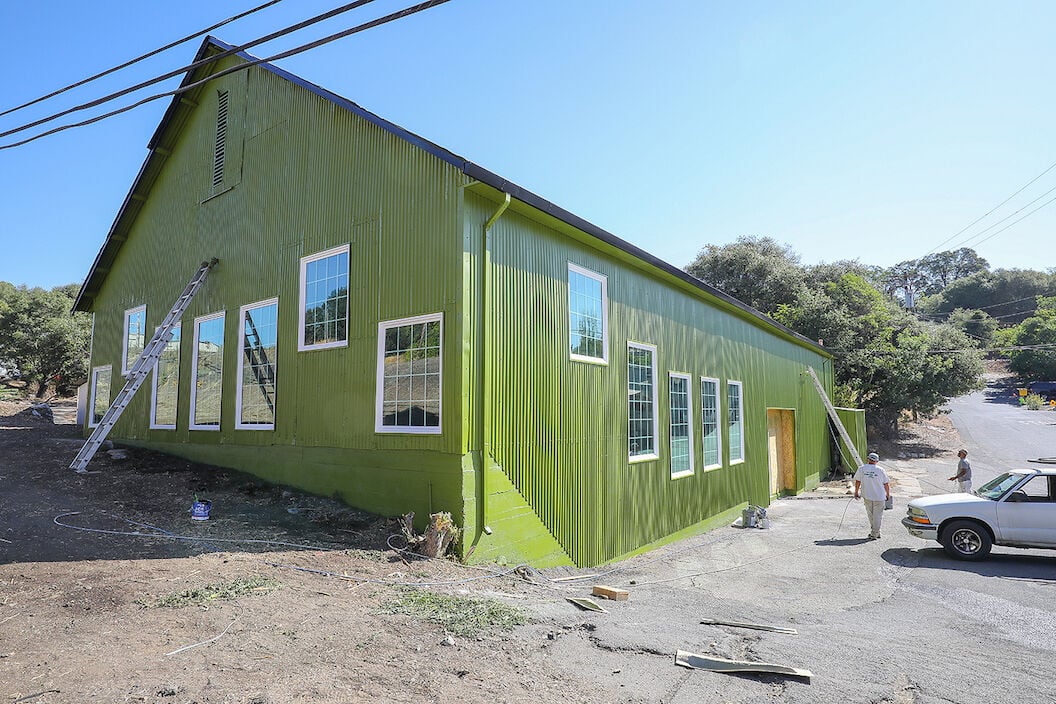 Painters Fidel Ulloa (right) and Jesus Franco, both of Lodi, spruce up a building at 10 Calaveras Street on the corner of South Washington Street that will be the location of the City of Sonora's second cannabis dispensary. 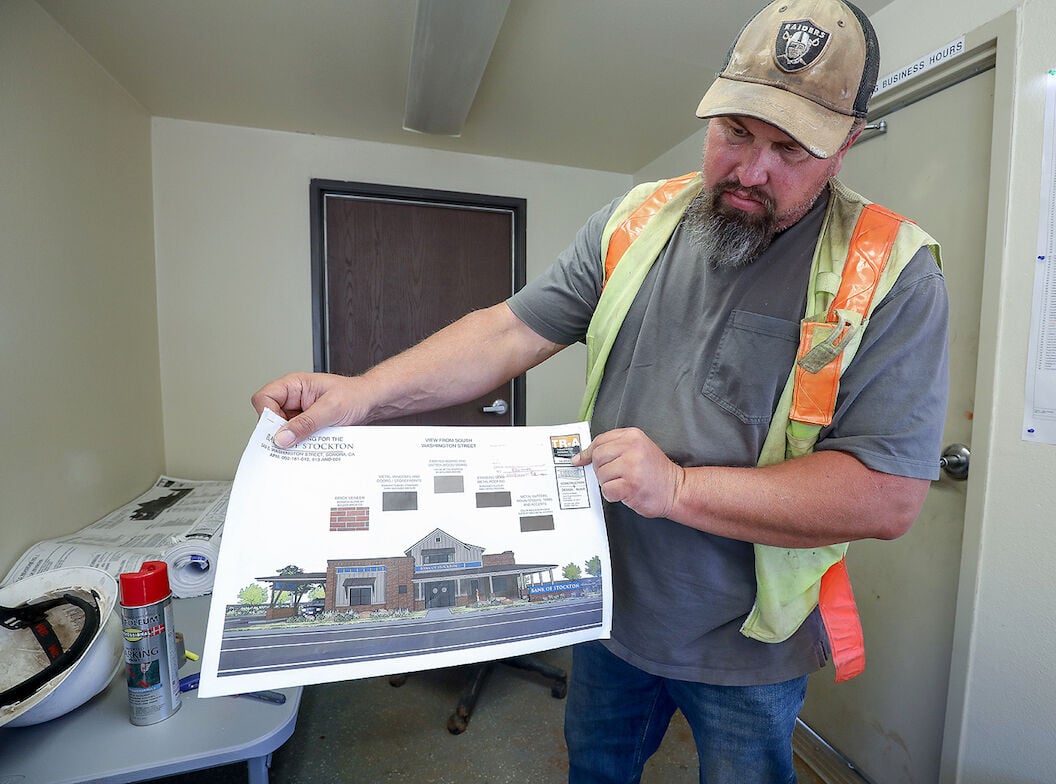 Construction Superintendent Nick Wyckoff shows an artist rendering of the Bank of Stockton that's being built on the corner of South Washington and East Lytton Street.

Flappy's Pizza Co. co-owners (from left) Mitchell Husong, 25, Zak Hailey, 27, and their father, Jonathan Hailey, all of Sonora, stand together behind the bar at the restaurant on South Washington Street in downtown Sonora.

Painters Fidel Ulloa (right) and Jesus Franco, both of Lodi, spruce up a building at 10 Calaveras Street on the corner of South Washington Street that will be the location of the City of Sonora's second cannabis dispensary.

Construction Superintendent Nick Wyckoff shows an artist rendering of the Bank of Stockton that's being built on the corner of South Washington and East Lytton Street.

The COVID-19 pandemic completely shut down business operations in downtown Sonora for some time, but a handful of new projects suggest commerce is alive and well.

Three soon-to-open businesses in downtown Sonora are in various states of construction, with all set to be opened in the coming months and into 2022.

The second recreational cannabis dispensary in the City of Sonora, located at 10 Calaveras Way, is seeking to open its doors to the public by the end of the year.

"There's a lot of bad apples out there. We're not one of them," said Tom Calmese, director of operations.

Calmese is a co-owner of the site with other investors, which include Raphael “Ralph” Calderon, of Valley Springs, who owns several cannabis businesses in Calaveras County and Northern California.

Calmese is an owner at Green Gold Calaveras in San Andreas, a recreational and medical dispensary.

The work has taken many months to complete on the building, which is over 100 years old and once operated as a machine shop and foundry.

Calmese said equipment inside, including refrigerators, freezers and a school bus, were removed before renovations such as painting and flooring.

In the next two weeks, they plan to install 30 security cameras and move in office supplies and other infrastructure.

The building is about 4,500 square feet, though the dispensary only plans to operate about 2,000 square feet at this time, he said.

The building will have to be signed off by the police and fire departments, he said.

The next, and pending step, he said, was approval of their license by the state Department of Cannabis Control.

The Bract House may have its name updated to include the known brand of Green Gold, Calmese said.

They were approved by the Sonora City Council  in May following a torrent of opposition from the public directed at recreational cannabis sales within the city limits.

The city's original pilot program allowed for up to two medical-only dispensaries in the city limits, but late last year the council approved changing the rules of the program to allow for recreational sales at up to three cannabis dispensaries within the city.

The recreational sites must pay a community benefit fee of $10,000 per month or 7.5% of sales if they exceed that amount.

Calmese confirmed that The Bract House had been paying the fee monthly to maintain its development agreement before the opening. He said at least $500,000 was invested in the purchase of the property and the renovation.

"It's all hands go. It's going with the faith that it's going to be a success," he said.

The Sonora branch of the Bank of Stockton has been at its leased location at 242 S. Washington Street since March 2009, but plans to expand into a newly constructed building on its own property by the first quarter of 2022.

"We have such a great team of bankers that look forward to serving our established customers and new customers alike in Tuolumne County," said Angela Brusa, VP director of marketing with the Bank of Stockton. "We are so excited to have a permanent location that we can call our own in Sonora, and we cannot wait to welcome the community into the new branch."

The new branch is about 3,100 square feet, complete with a drive-thru and 24-hour outdoor ATM. The design is intended to "pay tribute to the Mother Lode" with primary building materials of field stone, stucco, cobblestone, natural wood and rustic materials and Victorian details, Brusa said.

The walls will also be lined with large historical photographs reflective of Sonora and a gold-mining heritage.

"The bank uses photos from the Bank of Stockton’s Historical Archives to decorate, celebrating the history of the communities we service and bringing the past to the present in an interesting and educational way that reflects our strong brand," she said.

The bank employs seven people, and all will relocate to the new branch, she said. It is considered a branch relocation, not a fully new branch.

The bank will be at 549 South Washington Street.

She described Bank of Stockton as the oldest bank in California still operating under its original charter, with the first branch opened two years after the Civil war.

Bank of Stockton has 20 branches in 16 cities spanning nine contiguous counties, with $4.3 billion in assets, she said.

A new downtown pizza restaurant and full bar occupying the building once inhabited by the Intake Grill already caused an excited stir last week at its soft-opening.

"People came in and said, ‘It's almost like they're taken out of Sonora,' " said Marketing Manager Cassie Stevenson-Husong. "It's because there's nothing like it downtown."

At a grand opening scheduled for Saturday, they hope to officially debut the modern, quirky and cosmopolitan restaurant — Flappy's Pizza Co. at 123 S. Washington Street — to the downtown eating and drinking scene.

Wings are a common theme at Flappy's — on each of The Beatles on an Abbey Road print, on Neil Armstrong on the moon, on a neon sign and painted into a trio-chromatic pizza and beer wall art.

Stevenson-Husong said the design was inspired by restaurants "we know and enjoy" and would be a "cool new look that would be comfortable for everyone."

The menu includes appetizers like wings, "Flapperoni Bites" (sauceless, but dippable pizza rolls) and deep fried ravioli. For entrees there are salads, burgers, sandwiches and, of course, pizza, which is served by the pie or by the slice.

The menu includes a list of "Flappy Styles" which can be applied to a pizza, a burger, fries or a calzone.

The restaurant is also a full-service bar with beer and cocktails.

Jonathan and Jill Hailey were Modesto residents until about three years ago, whenl they moved to Sonora.