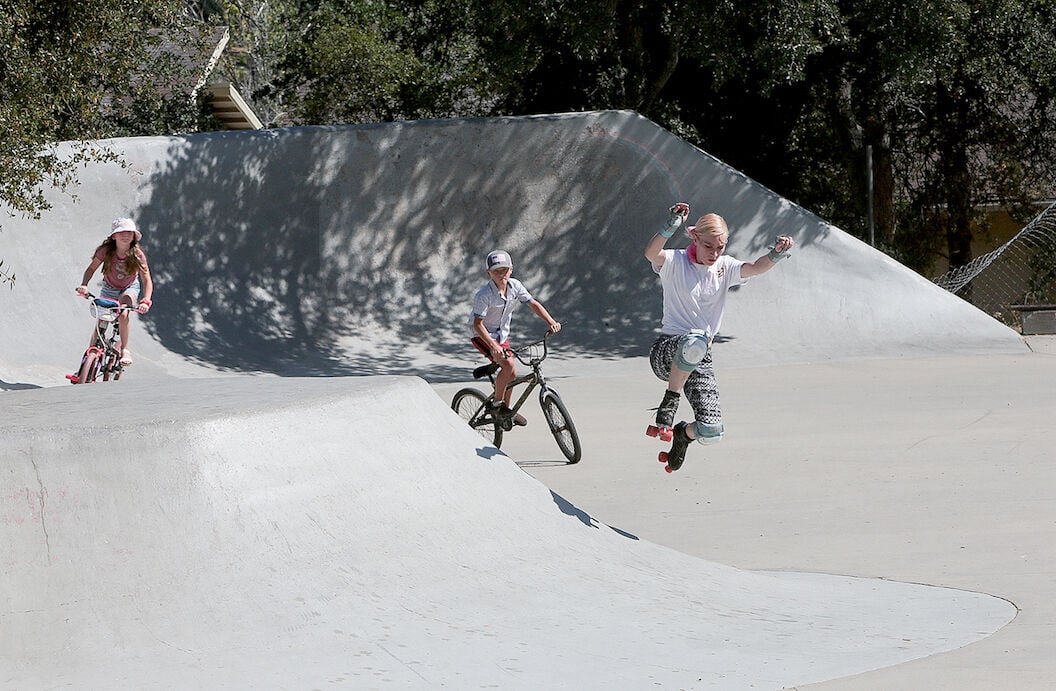 Kendall Aasen, 25, of Sonora makes a jump on a ramp and Tyler Hyde, 10, of Groveland, center, and his cousin, Raylie Flynn, 9, of Sonora ride their bikes at the Sonora Skate Park on Friday. 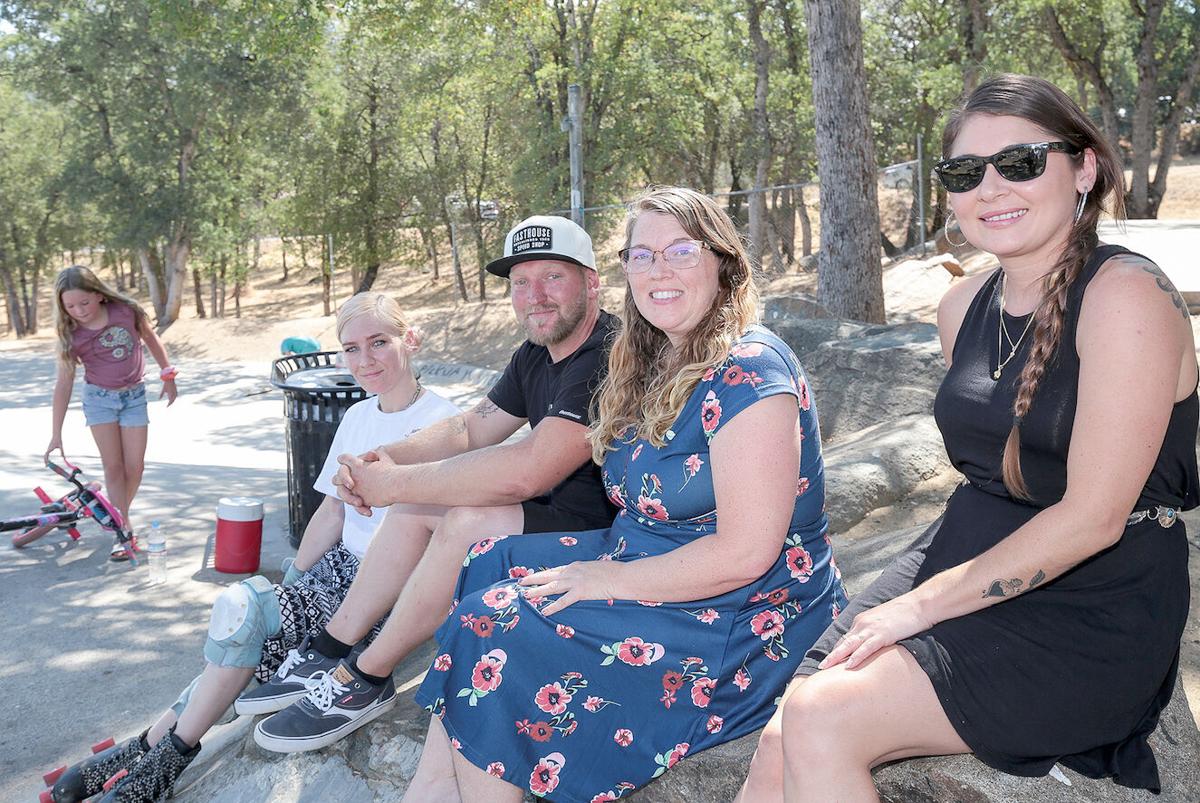 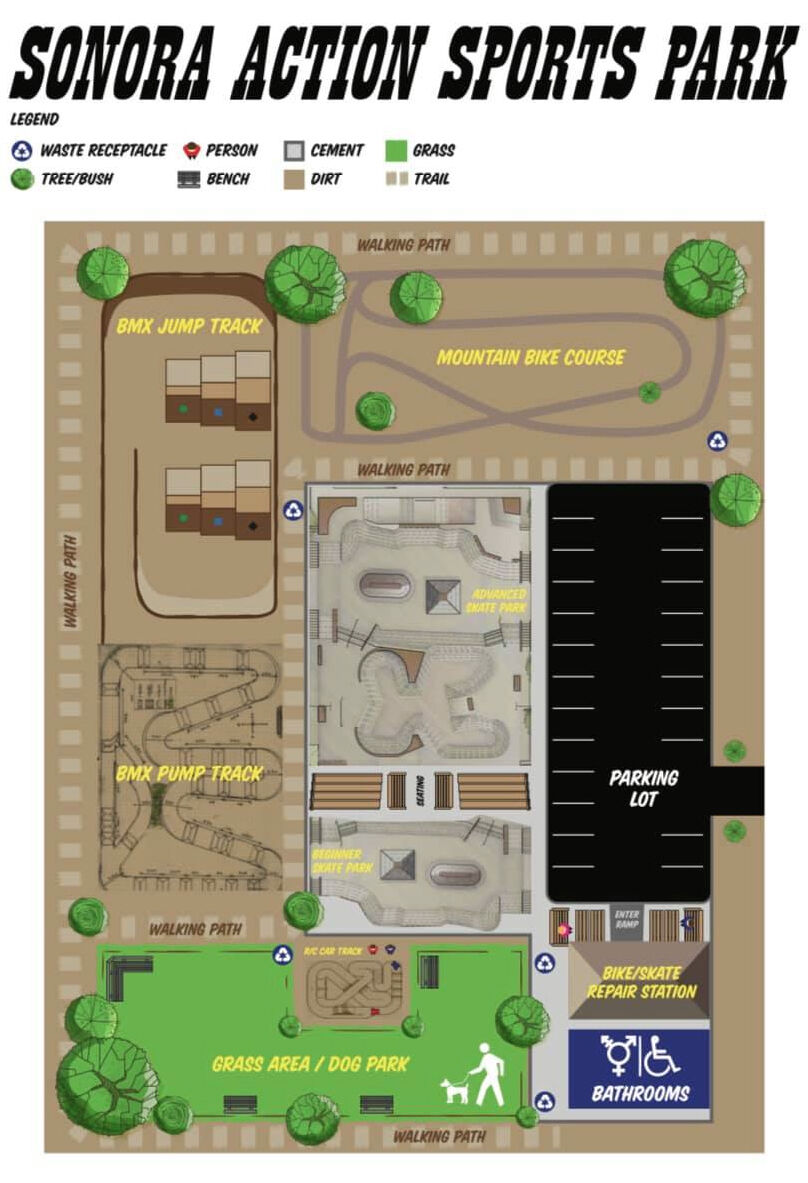 A graphic showing the proposed layout for the Sonora Action Sports Park, an idea being pursued by former motocross rider Justin Flynn, of Sonora.

Kendall Aasen, 25, of Sonora makes a jump on a ramp and Tyler Hyde, 10, of Groveland, center, and his cousin, Raylie Flynn, 9, of Sonora ride their bikes at the Sonora Skate Park on Friday.

A graphic showing the proposed layout for the Sonora Action Sports Park, an idea being pursued by former motocross rider Justin Flynn, of Sonora.

When Justin Flynn was a young adult, he was known as the freestyle motocross rider who performed aerial backflips and gravity-defying "supermans" at the Mother Lode Fair.

In later years, after the events were canceled, Flynn fell victim to substance abuse. But now, almost one-year-sober, he is strategizing the founding of Sonora Action Sports Park: a multi-sport, family friendly community gathering spot meant to promote healthy lifestyles for youth.

"I think it will create a new way of life for all ages, and I think it will help with our drug and alcohol problem," Flynn, 33, of Sonora, said. “However long it takes to do it, we're going to stick it out."

On Friday, Flynn's daughter, Raylie, 9, and his nephew Tyler Hyde, 10, rode BMX-style bicycles in circles around the upper level of the Sonora Skate Park on Greenley Road, sometimes taking up speed to crest over the bumps.

Others joined them. A skater meandered with a cigarette, attempting tricks, and another drove an electric car over small hills and into some rocks.

Kendall Aasen, 25, of Sonora, dipped into the bowl on roller skates. She has only roller skated for about a year, but trained in that time with the Motherlode Area Derby.

"Sometimes when I'm here, I'm racking my brain trying to do this line or do this trick and it doesn't work out," she said. "We really could use something new."

That sentiment is prevalent in the local skating community.

"It's fun, and I don't want to hurt anyone's feelings, but it's not engineered very well," she said.

The skate park is off of Greenley Road and adjacent to the 49er Rotary Park, the Tuolumne County Library and Heaven for Kids playground, which are operated by Tuolumne County.

Patterson is a transition skater: going vertical down bowls as opposed to the trick-driven street skating embellished by kickflips, heelflips, pop-shove-its and the ubiquitously known "ollie," or jump.

But it's one of the few places Tuolumne County youth can congregate for action sports. Since it's construction in the mid-1990s, DIY skate spots like one near the Quail Hollow Apartments or behind Sonora Elementary School, were shut down.

"Back then it was a piece of gold, but now it's just not working out," Flynn said.

Flynn remembered much of his generation turning to substance abuse due to the absence of available spots, as well as institutional and public chagrin to their sport. He believes boredom and a lack of recreational opportunities are still plaguing local action sports youth today.

"These kids don't have anywhere to go and be safe and do any healthy activities," he said. "I decided to spend the rest of my life doing something about the drugs and alcohol problem here."

According to the 2017-19 Tuolumne County Community Health Needs Assessment,

6% of seventh-grade students and 33% of 11th-grade students in traditional schools reported using drugs or alcohol at least once in the past month at the time of the survey, with increasing use by age.

Flynn's conceived project, contrary to some online speculation, is not a refurbishing of the Sonora Skate Park. Instead, they plan to leave it as it is — it's still county property — and find another 3- to 5-acre property within the downtown region.

Tuolumne County Recreation Manager Eric Aitken could not be reached for comment on Friday.

Flynn said they were assessing multiple options before drafting a proposal. He said he hoped the park would be near the downtown center, in the region of Adventist Health Sonora, Sonora Elementary School, the Tuolumne County Library and the Greenwood Village Apartments on Greenley Road.

The new site was designed to be an amalgamation of multiple action sport tracks and parks for a variety of proficiency levels. A widely disseminated "rough draft" of the park includes a central skate park with advanced and beginner sections divided by seating. To the north is a mountain bike course and to the south is a grass area, dog park and a small track for electric race cars. To the west is a BMX jump track and pump track (a circuit set with hills and turns ridden by BMXers who "pump" instead of pedal).

They're hoping the site will be built, designed and maintained to make it eligible for the professional race circuit, for events and youth clinics.

To the east is a parking lot, a bike/skate repair station and store, and bathroom facilities.

At the store, Flynn hopes to accept donated bikes, skate equipment and gear that can be sold or rented at a reasonable rate. The funds generated from the store, he said, would then be used to maintain the park.

Organizers cited a variety of public goods as a result of the Sonora Action Sports Park's potential construction, from reduced youth substance abuse to a revitalization of an underserved sector of the local economy.

This year, skateboarding will debut as an Olympic sport at the Summer Games in Tokyo.

The global skateboard market size was valued at $1.9 billion in 2018, according to Grand View Research, a market research and consulting company based in San Francisco, and appeals mostly to kids and teens. As of 2016, more than $500 million of those sales were credited to the United States.

To date, the plans are still very much in development. Flynn has embarked on a public-relations campaign, generating interest, support and, most importantly, the information he needs to execute the plan.

The group still needs to become a nonprofit organization and generate the funds (as yet unknown) to finish their plans. They hope, Flynn said, to have the entire park open to the public within one to two years.

At the moment, they're working on a promotional video to declare their goals and intentions. The Facebook page for Sonora Action Sports Park has garnered 611 likes and 662 followers as of Friday.

Tuolumne County has, in its past, overcome hurdles for the skate community.

Sam Taylor of the Senior Youth Partnership, a Sonora nonprofit organization, skated in college mostly bombing hills with his friends.

"In our day, it was just a question of going downhill as fast as you could," Taylor said.

When Taylor’s son took up the sport in the 1990s in Tuolumne County, there were better wheels, better bearings, better decks, but a lack of locations to safely or legally assemble.

BZ Smith, a friend of the Taylors who was involved in facilitating the creation of the Sonora Skate Park, remembered junior-high aged kids taking up the sport.

"It was new to our area, but the interest in skating has been around for a really long time," she said.

Taylor envisioned a place for those kids to develop their craft here in Sonora and in the style of the Lords of Dogtown, a skate crew from Santa Monica popularized later in a 2005 film who took up skating swimming pools for vert tricks.

Taylor visited Santa Rosa to see a skate park with his family and took photos from the air and the ground. A steering committee of skaters and parents made the project happen around 1996 and 1997, he said, though he recalled being two-thirds of the way through the project and $65,000 over budget.

"When all was said and done, there were some regrets,” he said. “Even at the time, we missed the mark on what some of the Santa Rosa skate parks had to offer. Some parts went too deep too fast, and there were limits on what a skater can do."

Since then, some believe the skate park has suffered from neglect and a lack of stewardship.

"If you look at other contemporary skating parks, they're more challenging, longer course runs, there's more variety," Smith said. "When it was built there was a keen interest, but in the meantime there was no system put in for maintenance."

Graffiti is a common criticism of the skate park and frequently painted over, though one tag was still there Friday telling skaters to pick up their trash.

"In today's world, it could probably use some updating," Taylor said.

It takes minimal experience — just a little bit of courage — for a young person to get on a bike or a skateboard and wheel down a bowl, Patterson said.

Used gear assists in price for children in low-income families. A complete skateboard with a deck, wheels and trucks cost approximately $130.

"It will be a safe place for our community to get outdoors and try something new," she said.