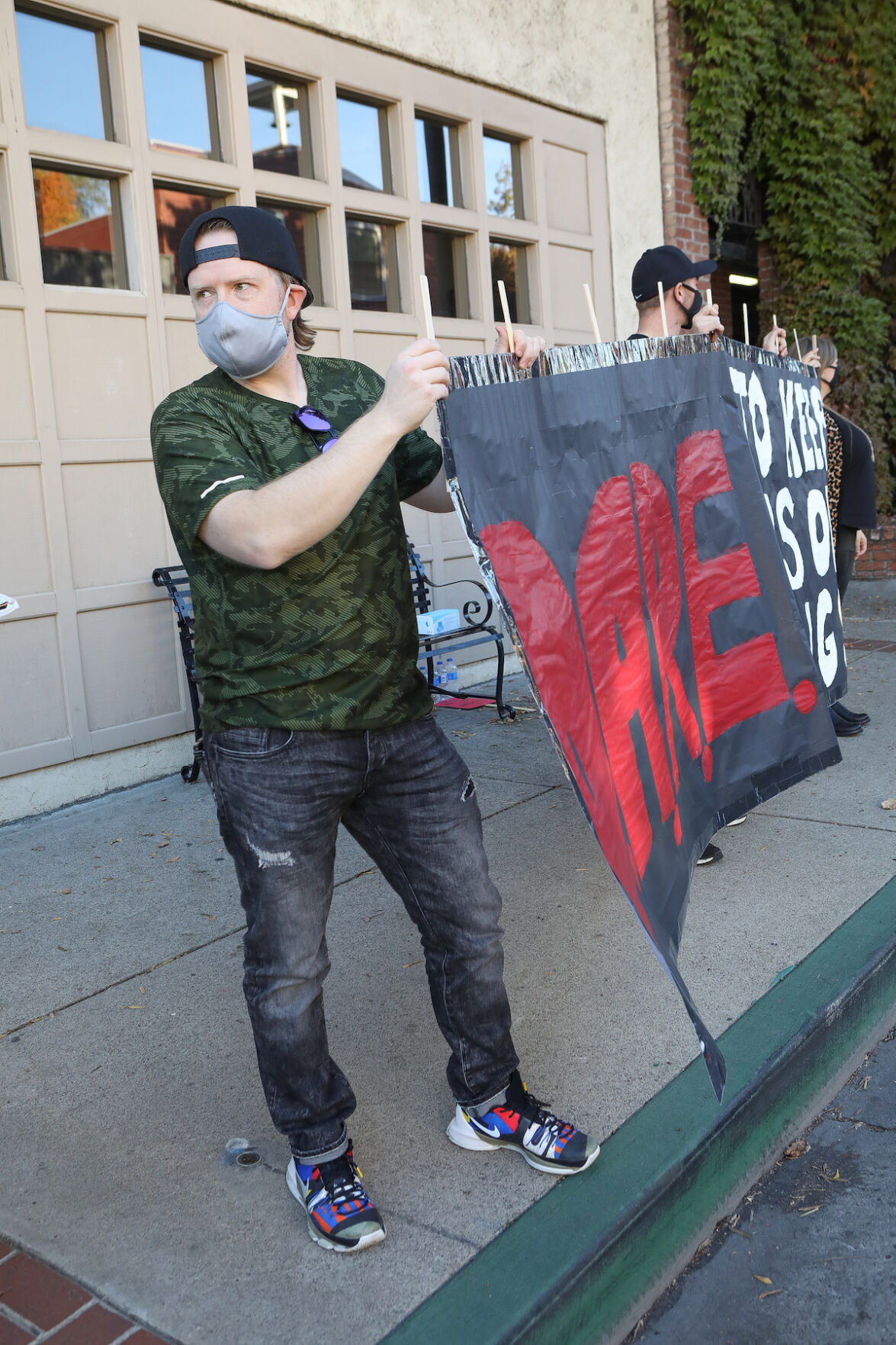 Mel Kirk, 38, of Mi-Wuk Village holds a banner with protestors in front of City Hall on Monday. 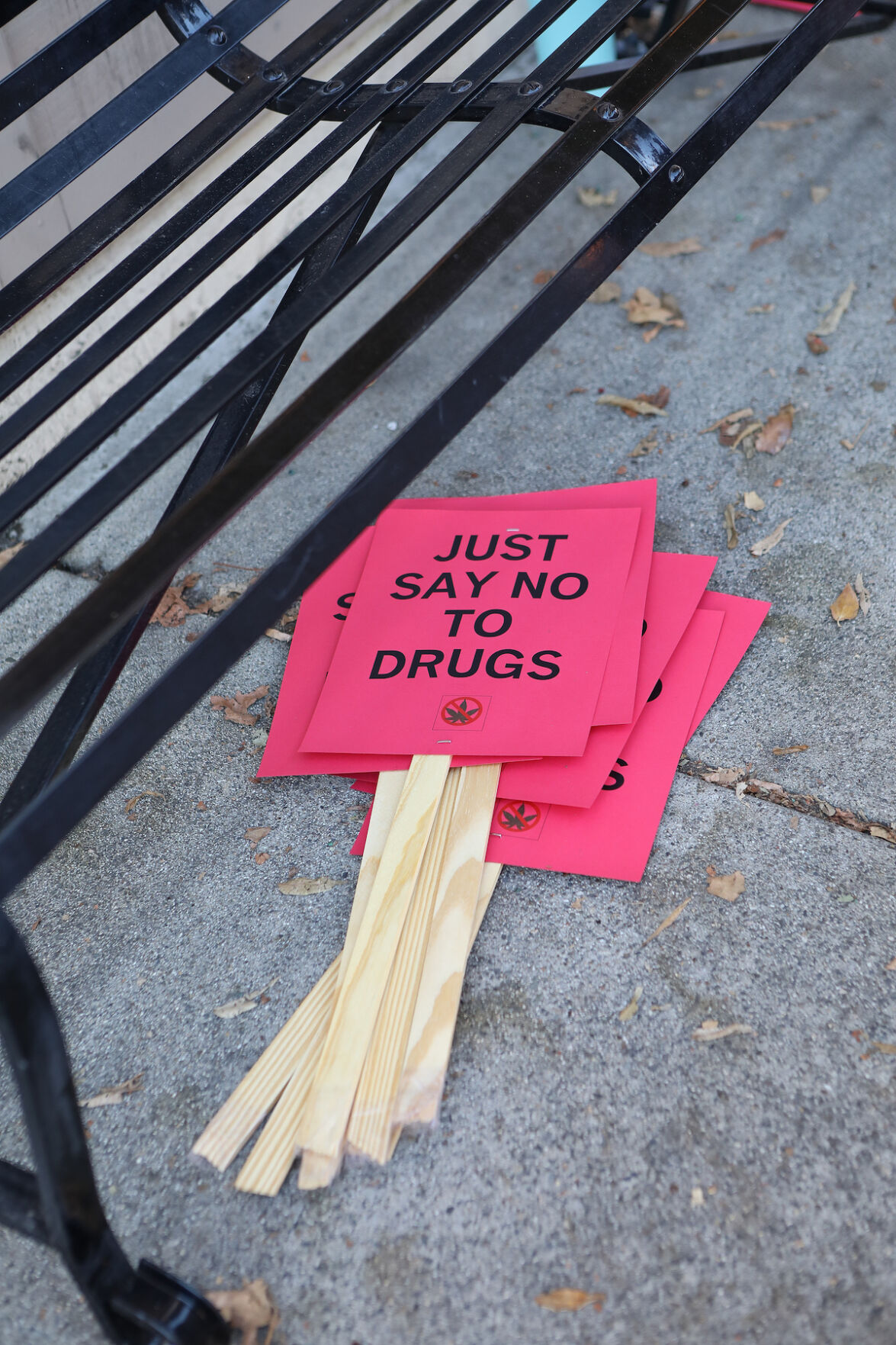 Additional signs are under a park bench in front of City Hall on North Washington Street. 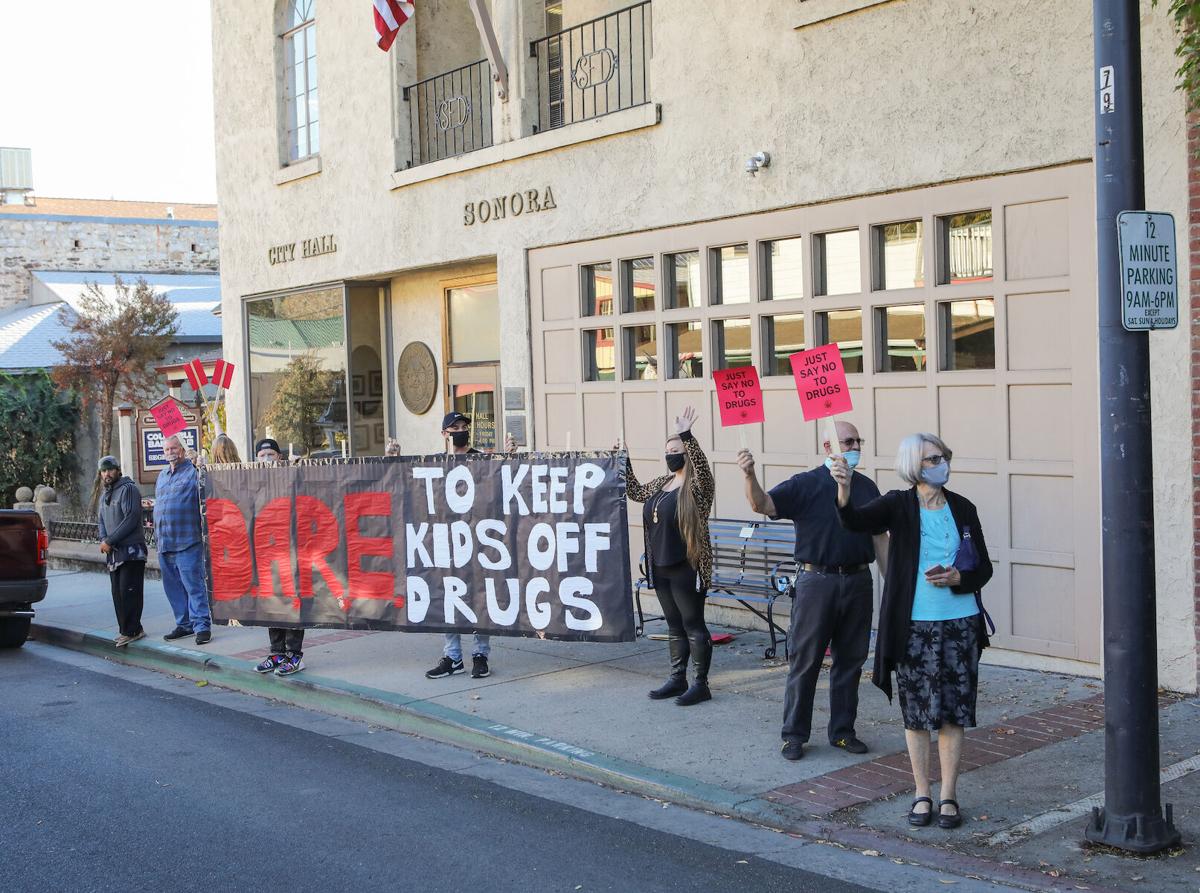 Protestors against the legalization of recreational marijuana stand in front of City Hall on Monday.

Mel Kirk, 38, of Mi-Wuk Village holds a banner with protestors in front of City Hall on Monday.

Additional signs are under a park bench in front of City Hall on North Washington Street.

Protestors against the legalization of recreational marijuana stand in front of City Hall on Monday.

Bobby Marsh was among dozens of demonstrators outside of City Hall in downtown Sonora on Monday protesting the city council’s pending decision later that night to legalize sales of cannabis for recreational, non-medicinal use within the city limits.

The 26-year-old Crystal Falls resident said he first used cannabis in middle school before turning to methamphetamine in high school. He hoped his advocacy could stop young people from ever trying cannabis at all.

"Marijuana and methamphetamine brought a huge chunk out of my childhood and I developed a lot of bad habits," he said. "Seeing the destruction it had in my life personally, I didn't want to see that in the youth of our community."

It was just hours before the council held a public meeting at 5 p.m. to consider the final approval of a proposed ordinance that would allow up to three recreational-cannabis dispensaries, manufacturing facilities and testing laboratories.

Many of the demonstrators hoisted matching red signs emblazoned with an anti-drug message and a green marijuana leaf. That number ballooned to more than 30 by 3:45 p.m., with teachers, concerned parents, politicians and even children joining the fray.

Their chants were individualized and usually directed at honking, passing cars that appeared to be showing their solidarity.

"We don't need it," yelled one demonstrator.

"For our kids," shouted another.

County Supervisor Anaiah Kirk — one of the most active, involved and vocal opponents to the legalization of recreational cannabis sales in Sonora throughout the multi-month approval process — said an approval of the ordinance would desensitize the county’s youth into believing cannabis use was socially acceptable and not harmful.

"It's starting with marijuana,” he said. “That's where we're at right now. We shouldn't, as a society, be promoting substance abuse.”

Kirk added he believed drug possession (but not possession with intent to sell) should be decriminalized to drug diversion programs, but said the changed messaging about the acceptability of cannabis in society would be detrimental to the community's future.

"I think it's easier to just say no now," he said.

The city’s current ordinance established a three-year pilot program that allows for up to two of each business type, but for medicinal cannabis only.

Last week, the council voted unanimously to approve the ordinance during their first of two meetings on the topic. They were expected to vote again on the updated ordinance Monday night.

The ordinance was initially approved with a stipulation that the council would negotiate an additional fee for public educational funding about cannabis as a part of the development agreements for potential new dispensaries.

On Oct. 12, the city Planning Commission previously held a public hearing to provide a recommendation to the council and voted 4-1 in favor of striking down the proposed ordinance.

Cannabis businesses must pay $10,000 or 10% of their revenue to the city per month, whichever is greater, under the current agreement. State law doesn’t allow the city to charge a sales tax on medicinal cannabis, but it could do so for recreational transactions.

The new ordinance will go into effect sometime in December if approved on Monday.

Jeff Muzio, owner of Hazy Bulldog Farms, said he was "optimistic" the council would continue on the same course from its previous vote.

"Unfortunately the opposition continues to make extremely outdated arguments, and it's falling on deaf ears," Muzio said. "Just because they are the loudest people in the community doesn't mean they're the largest."

Other advocates of recreational sales in Sonora have noted out-of-county cannabis delivery services can legally drive into the county to sell cannabis products to customers whether or not they have a prescription from a doctor.

"These protesters are going against the will of the community and making their voices as loud as possible, and it just comes off as immature," Muzio said.

Tracy Webster, a fourth grade teacher at Sonora Elementary School who did not attend the demonstration, said she was uncomfortable because she was contacted through her work email by Kirk about the meeting and the rally.

"Regardless of my beliefs, I just don't feel he should be doing that.” she said. “I don't know him, I don't know anything about him besides he's a supervisor.”

The email is directed at "educators, principles [sic], school board members and school staff" and asks anyone interested in the issue to participate at the protest and in the city council’s Zoom meeting. It also requested protest participants to wear masks.

The message also includes attachments to a blog post written by Kirk, an opposition letter to recreational cannabis legalization sent to an an anti-suicide, anti-substance abuse and anti-child abuse organization called the Yes Partnership, and instructions for participation in the Zoom meeting.

Webster declined to share her position on the issue, but added she was further discomforted about the message with the surging COVID-19 threat in the county. She said she knew at least two staff members at Sonora Elementary who received the email, as well as a teacher at another school.

Mel Kirk, 38, brother of Anaiah Kirk, said they were “simply voicing” their opposition to marijuana in the community.

He defended the presence of the demonstrators at the rally and pointed out an extra box of masks he brought in case anyone didn’t have one. He also said protesters were instructed to social distance.

"We take all this very seriously," he said.

Mel Kirk said he hoped the city would consider alternative methods of acquiring additional tax revenue, such as investment into local business or young entrepreneurs, allowing them to expand or provide jobs.

Mel Kirk speculated that an increase in cannabis use would lead to increased costs for law enforcement and contribute to expanding blight in Sonora.

He described their strategy as "old-school messaging" commensurate with the D.A.R.E program (Drug Abuse Resistance Education): "Just say no to drugs."

Dana Reel, 52 of East Sonora, said she was against recreational cannabis because her son, one of eight children, used cannabis before trying harder drugs and serving two prison terms.

"It's an addiction to the feeling, and it's just synthetic,” she said. “It's a fake feel-good, and if you keep masking that with drugs, you're never going to know how to deal with life.”

Reel said she did not have a position on medical cannabis products, but likened them to "painkillers."

"When it's not enough, how are you going to be able to stop?" she said.