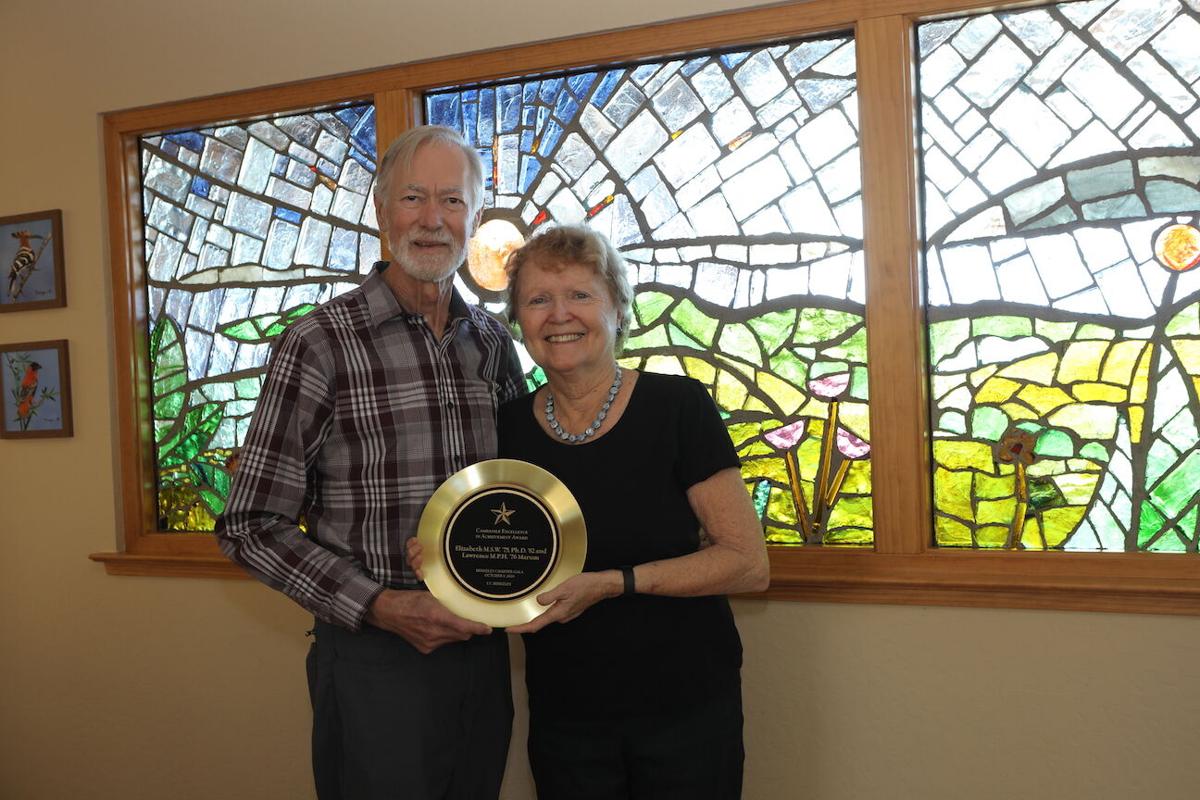 Larry and Elizabeth Marum, of East Sonora, hold the Campanile Excellence in Achievement Award they recently received from their alma mater, the University of California, Berkeley, for their work providing humanitarian aid in Africa and other places across the world. 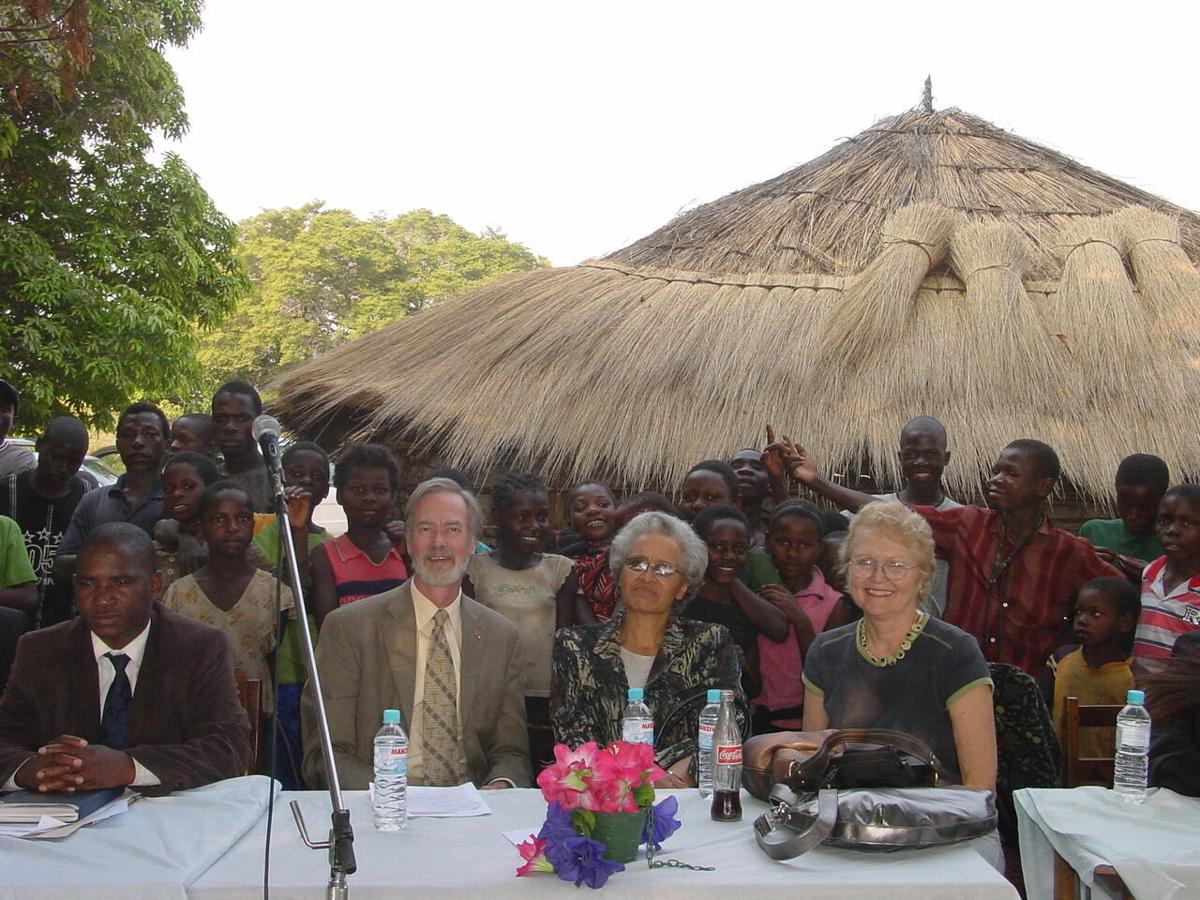 Larry and Elizabeth Marum, of East Sonora, hold the Campanile Excellence in Achievement Award they recently received from their alma mater, the University of California, Berkeley, for their work providing humanitarian aid in Africa and other places across the world.

Dr. Larry Marum and Dr. Elizabeth Marum followed a humanitarian calling which brought them from Bangladesh to Uganda to dozens of other countries in between.

Closing in on their twilight years, they plan to enjoy their retirement in their longtime home of Tuolumne County.

"We really appreciate the welcome back we've received from friends and colleagues here in the county,” Elizabeth Marum, 71, added. “Tuolumne County has made us very much feel like a welcome home."

This year, the Marums were honored as a couple for a premier commendation from the University of California, Berkeley: the Campanile Excellence in Achievement Award. The award recognizes alumni for a lifetime of achievement reflective of their education at the school.

"We feel honored and humbled by being selected," Larry Marum said. “They gave it to two other individuals and gave it to us as a couple. I think it was the complementary nature of our work."

"It was funny because we never worked on the same projects,” Elizabeth Marum said. “We tried to be in the same country most of the time. The award is to both us as a couple, though our work was quite different."

What bonds their work together was a humanitarian spirit that likely saved the lives of thousands of people over their career.

Larry Marum, a public health professional, was at the forefront of HIV research and prevention, and pediatric and maternal care throughout Africa.

Elizabeth Marum, a social welfare professional, campaigned vigorously for women's social and economic empowerment in countries where those values were often unknown. Her work also touched on the mounting epidemic crises in the countries, and she facilitated US government-sponsored aid to the needy.

The pair met in college in Wheaton, Illinois, in 1968 and were married in 1970. Larry Marum was born in Brooklyn and moved to California after medical school at New Jersey Medical School in 1973. He trained in pediatrics at Oakland Children's Hospital and studied public health at Berkeley. Elizabeth Marum was born in California, but grew up in Tokyo with her parents, who were missionaries. She received her masters degree and doctorate at Berkeley at the school of social welfare.

While at Berkeley, they said they facilitated close relationships with students and professors in a highly stimulating and challenging environment.

"It was just a wonderful mind expanding education environment with wonderful professors,” Larry Marum said. “We were able to do that while incurring very little debt. It enriched our lives, and there were so many rewards to be able to work in those resource limited environments."

"It showed how powerful it is to train and educate at all levels, competent health workers," Larry Marum said. "What we did is change the way the curriculum was completely taught."

Elizabeth Marum was not far behind in finding her own calling in Bangladesh and was soon hired by the U.S. Agency for International Development, evaluating a food-for-work program designed to assist unemployed women with families. She said the projects were designed around infrastructure and labor — most women worked all day digging and unloading mud to develop roads — and they were paid in six and a half pounds of surplus United States wheat to feed their families.

"In spite of the difficulty of the work, it was very much appreciated by the women," Elizabeth Marum said. "It was empowering for women to work outside the home and bring home the food, even if the wheat wasn't what they were used to eating."

The Marums were familiar with Tuolumne County before they officially made their move to reside here, coming up often to cross-country ski, hike in the wilderness, or spend holidays at Pinecrest and Dodge Ridge when they first lived in California.

In 1983 and after returning from Bangladesh, they bought a plot of land in Sonora near Tuolumne and took up occupations here – Larry Marum as a member of Foothill Pediatric and Elizabeth Marum as director of the Hospice of the Sierra.

"Coming to this county from Bangladesh, it was a beautiful change,” Elizabeth Marum said. “Bangladesh has been deforested. It is a flat river delta with horribly hot weather about 10 months of the year and the other two months it's just hot. It really helped us develop a love for the county.”

Larry Marum described formative experiences working as a pediatrician in the county and developing lifelong relationships with families. Before they took their next humanitarian journey to Uganda in 1991, Elizabeth Marum said she resigned her position at the hospice to be the first administrator at the Sierra Waldorf School, which they helped found in Jamestown.

Over the next decades, much of their work was defined by the social and health crises wrought in Africa and Asia due to war, famine and disease. Elizabeth Marum began work with the U.S. Center for Disease Control and Prevention in Uganda in the aftermath of the country's civil war, designing, managing and evaluating HIV prevention and care projects funded by the U.S. government.

"We found Uganda to be a wonderful place to work because people were so open to trying out new ideas," Elizabeth Marum said. "It was just a very open time in Uganda's history where people were open to try new things. But they had gotten through their war and had relative peace then they were just blasted by this virus, this epidemic."

Larry Marum worked with the faculty of Makerere University in Kampala, researching how HIV was transmitted from mothers to children during pregnancy, birth and breastfeeding. He was in charge of a mother-child clinic, working with Ugandan doctors, obstetricians and nurses to track children and their development with the disease.

"When we first went as we commuted to work, we drove along the road where there were alot of carpentry shops,” he said. “We would pass the coffins stacked high along that road every day. We attended many funerals of colleagues, burials as well as patients as well as others in the community.”

They stayed in Uganda eight years, they said.

Larry Marum said he returned a year ago to receive an award from the school of public health in Uganda after helping to found their master of public health training program. Many of his former students, he said, were now the head of Ebola response or the COVID-19 response country-wide.

Their international humanitarian careers went even farther from there.

They then spent two years in Malawi before moving to Nairobi, Kenya, working in the HIV and public health fields. Larry Marum later moved to Atlanta, leading the CDC global blood transfusion safety program, before moving to Zambia as the director of the CDC in the country. While in Zambia, he teamed up with the international charity managed by former Secretary of State Hillary Clinton and founded a pediatric center that reduced maternal mortality by 35 percent in its first year and 55 percent in its second, he said.

"That was one of the most rewarding challenges in Zambia and in my whole career," Larry Marum said.

Elizabeth Marum was asked to go to a number of countries in Asia such as Papua New Guinea, Myanmar, China and Vietnam among them. She later worked with the World Health Organization on global testing guidelines and was assigned to work in Geneva.

Oftentimes, they could not always be together, they said, but they strived to see each other as much as possible.

The couple is now formally retired from government service to focus on their health and family. They said they both maintain their connections with past colleagues and organizations, however, and do contributive work to research and academics.

They have two children, twins, who live in the county and a grandchild on the way

But their family extends out to all the children and families they have helped on their travels, the Marums said, including to some honorary "namesake grandchildren" in Africa.