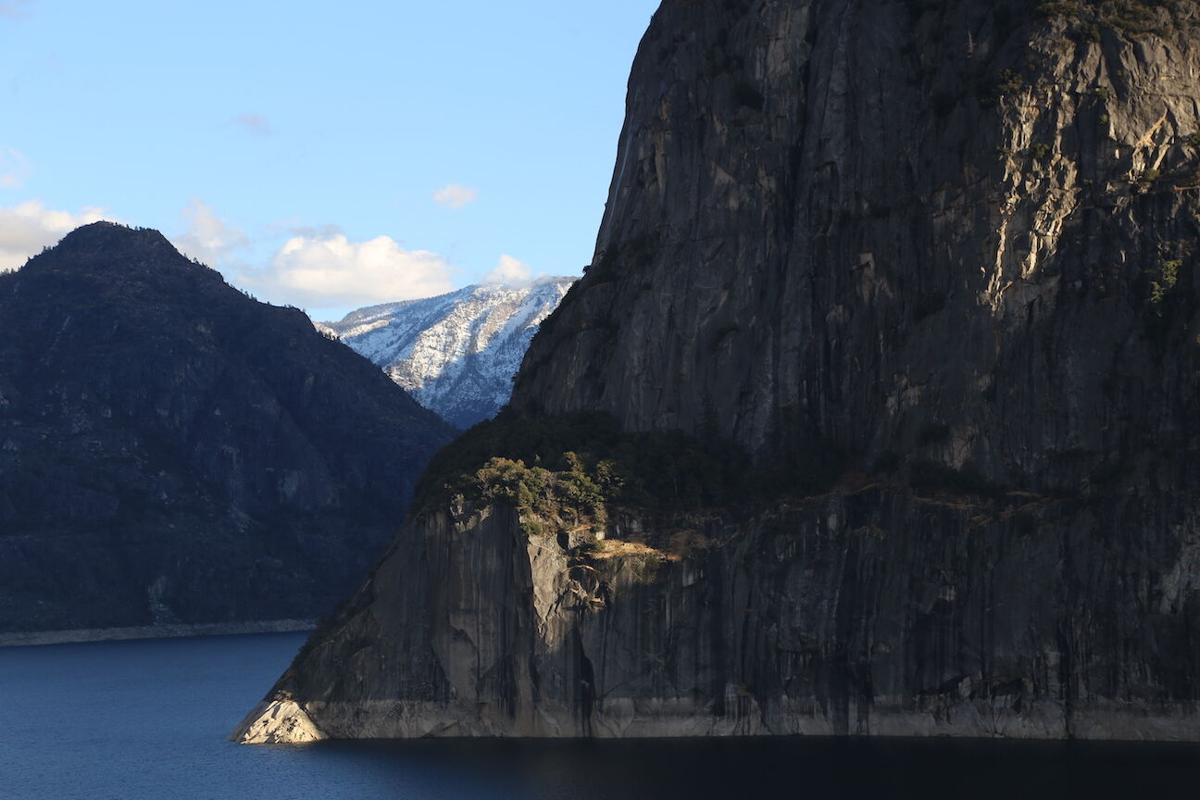 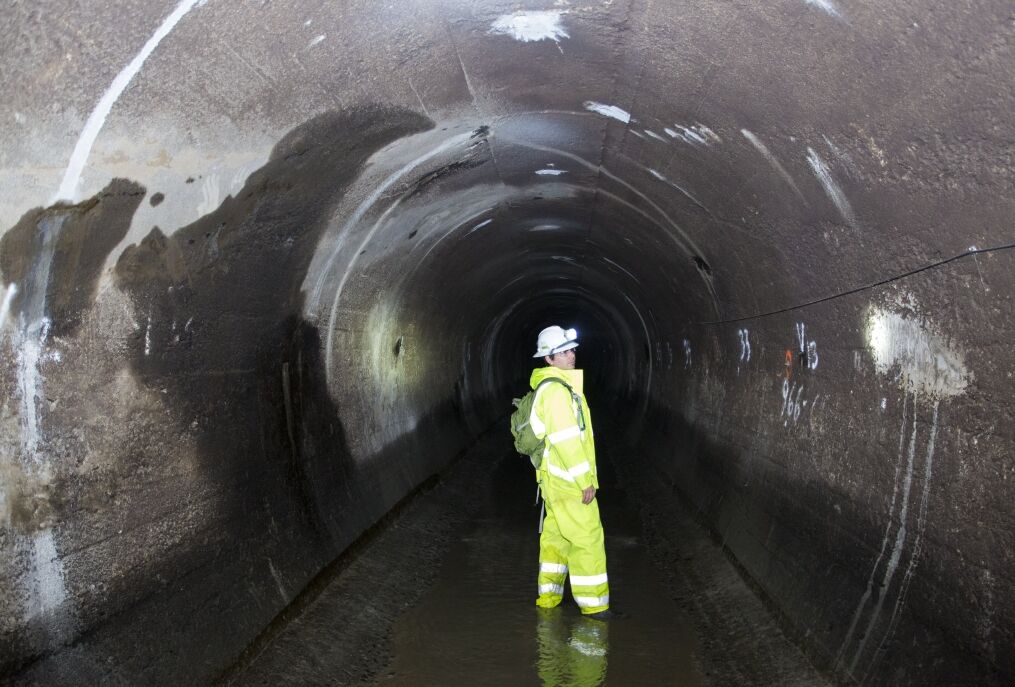 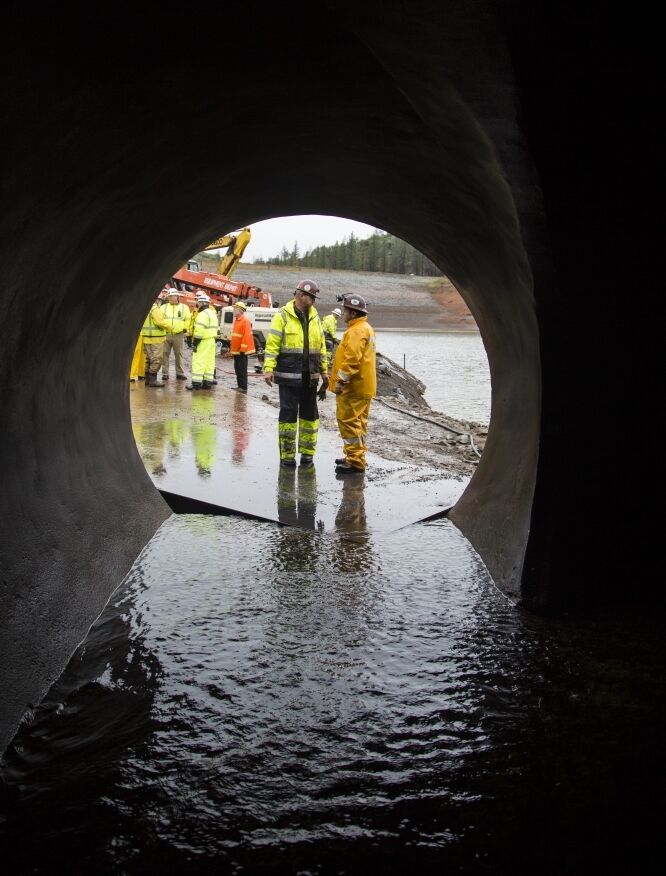 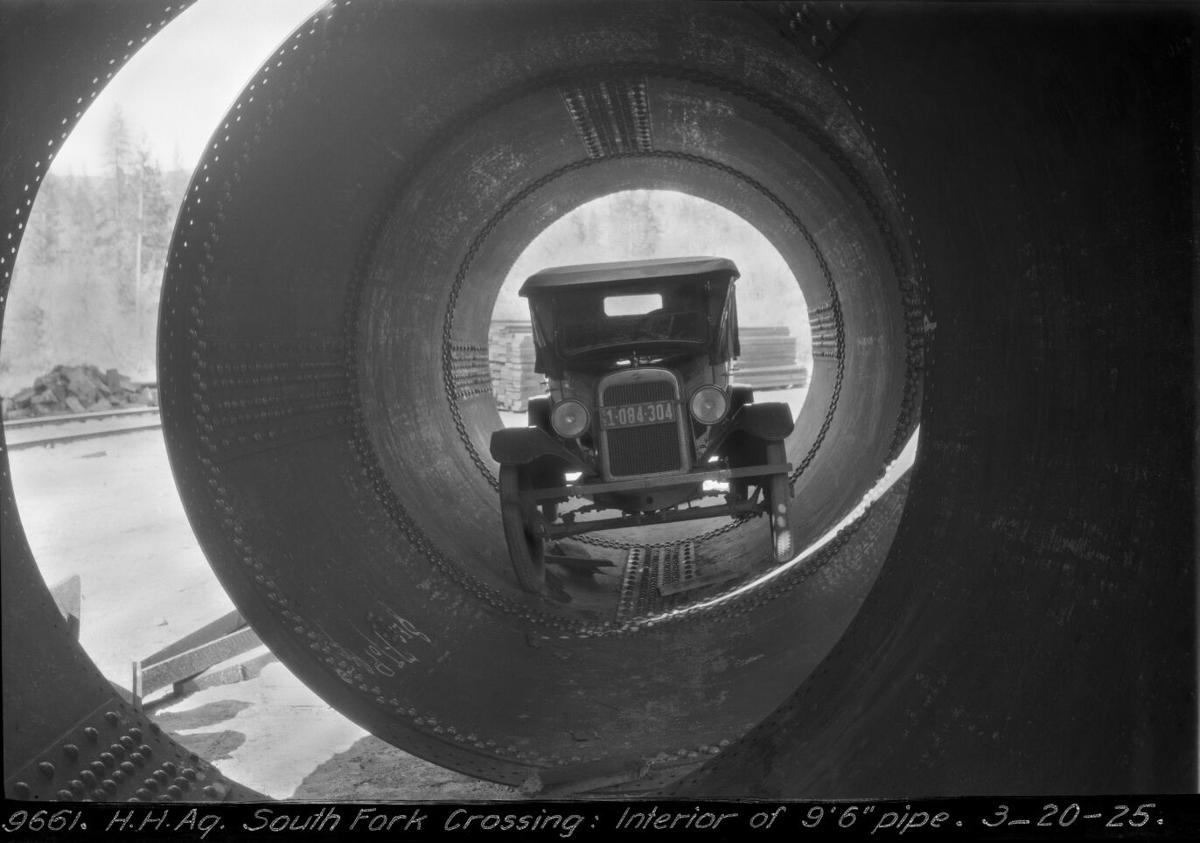 An old photo taken in 1925 of a car in a large pipe that was part of the Hetch Hetchy project. 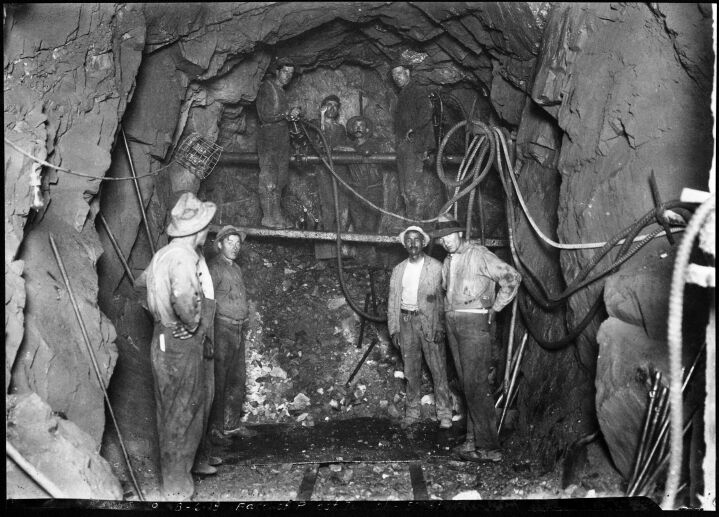 An old photo taken in 1918 of Hetch Hetchy project workers.

An old photo taken in 1925 of a car in a large pipe that was part of the Hetch Hetchy project.

An old photo taken in 1918 of Hetch Hetchy project workers.

The City and County of San Francisco and the San Francisco Public Utilities Commission are planning a five-year $140 million project beginning next year to repair, rehabilitate and upgrade the 19-mile-long Mountain Tunnel, a key component of the Hetch Hetchy Water System that takes water from Tuolumne County and sends it to San Francisco.

The San Francisco Public Utilities Commission, which is a part of the City and County of San Francisco, owns and operates Hetch Hetchy Water and Power. The system is named for the former Hetch Hetchy Valley, which is now underwater in Hetch Hetchy Reservoir, held back by the O’Shaughnessy Dam that impounds the Tuolumne River inside Yosemite National Park. The system also includes the company town of Moccasin.

The tunnel, completed in 1925 and operational since that time, is one of two Hetch Hetchy tunnels in Tuolumne County. Below O’Shaughnessy Dam, the 11-mile-long Canyon Tunnel is bored entirely through granite and carries water to a junction called Early Intake, where water from Cherry and Eleanor reservoirs intersects with tunneled water from Hetch Hetchy and the Tuolumne River.

Beginning at Early Intake, the Mountain Tunnel is a 14-foot-diameter water tunnel with eight miles bored through granite and 11 miles lined with concrete. It stretches underground from Kirkwood Powerhouse on the Tuolumne River, below and downstream from Preston Falls, the Yosemite National Park boundary, and O’Shaughnessy Dam, to Priest Reservoir, near Priest Station Cafe, above Moccasin and the giant penstocks that send Hetch Hetchy water downhill to Moccasin.

The contract for the next big tunnel project has been awarded to an infrastructure construction contractor called Michels Corporation, which is headquartered in Brownsville, Wisconsin. Work on the project is expected to begin in January 2022, with closures of 60 days to 100 days each year, and it’s expected to be complete by December 2026.

Asked how many total new jobs the project will create, and how many jobs it will create in Tuolumne County, a spokesperson for the San Francisco Public Utilities Commission referred those questions to Michels Corporation, which did not respond before deadline for this news report.

The $140 million contract with Michels Corporation requires that 30% of the construction work hours, and half of the apprentice work hours, will be completed by local workers based on the City of San Francisco’s hiring policy, Will Reisman with the San Francisco Public Utilities Commission said Wednesday.

The system serves about 3,500 Groveland Community Services District customers and 2.6 million people in the Bay Area, including all of San Francisco and San Mateo counties, and portions of Alameda and Santa Clara counties.

During shutdowns of the Mountain Tunnel, the Groveland Community Services District, which relies on Hetch Hetchy system water, has a treatment plant at Big Creek that can treat water from the Pine Mountain Lake reservoir, as well as another plant at the former mining settlement called Second Garrotte, which can treat water from Cherry or Priest reservoirs, Pete Kampa, GCSD general manager, said Wednesday.

Tunnel shutdowns “occur annually normally for a period of 30 to 60 days, with one coming up in just over a week” between Feb. 11 and 23, Kampa said.

“We have been informed that the annual tunnel shutdowns for 2022 and 2023 will be 60 days each, extending from January to March,” he said. “In 2024 and 2025, we are planning for longer shutdowns of up to 120 days spanning December through March each year.”

The district asks its customers to watch their water use during tunnel shutdowns, Kampa said.

Gray is 72 years old now, and his father worked for Hetch Hetchy starting in 1924 at age 14 as a water boy and then as a brakeman on the Hetch Hetchy Railroad. Hetch Hetchy projects over the decades served as catalysts, including high points and low points, in the Groveland and south Tuolumne County economies, affecting generations of boom-bust workers and some who stayed and became Tuolumne County residents, Gray said.

“At first they kept that railroad alive because they knew they would have to raise the dam,” Gray said Wednesday in a phone interview. His father moved eventually up from brakeman to equipment operator, and part of his duties included chauffeuring dignitaries in modified buses on the Hetch Hetchy Railroad tracks.

Gray said the railroad remained active until World War II, then Hetch Hetchy Water and Power had workers tear it up, and the scrap iron got used for the war effort.

“My father and my uncle had a contract to remove railroad ties in the 1950s,” he said. “My father, he worked for the Hetch Hetchy system 27 years and he died at age 50. Many miners and ranchers worked for Hetch Hetchy. My great-uncles worked for them, and my grandfather drove wagons to make freight deliveries.”

The history and economic fortunes of south Tuolumne County along Highway 120 — the ebbs and flows, the highs and lows, the peaks and valleys — reflected what was going on with Hetch Hetchy Water and Power over the course of a century, Gray said.

Work continued in the 1950s with construction of Cherry Dam, to catch more water for Hetch Hetchy at Cherry Reservoir, which impounds Cherry Creek on the edge of what is today designated as the Emigrant Wilderness.

Lots of Hetch Hetchy workers were miners who came from out-of-state, Gray said. Some stayed, and most of them moved on. There are some families that stayed on here in Tuolumne County.

Today, the company town of Moccasin is home to some of the best-paid workers in Tuolumne County, Gray said. He estimates there are 250 to 300 highly skilled workers based at Moccasin, including electricians, plumbers, carpenters, engineers, and hydrologists, who can make $35 to $40 an hour.

“It’s one of the last company towns in California,” he said. “The City of San Francisco owns all the housing there.”

Over the decades, Gray said, he’s seen Hetch Hetchy Water and Power do tunnel shutdowns “almost every year” so they can walk the tunnel and inspect it for cracks. Each year the shutdowns are normally for a short period of time.

“The sheer age of the tunnel means they need to do annual inspections,” he said. “In my lifetime, it’s just about a yearly event.”

Steven Ritchie, assistant general manager of water enterprise with the San Francisco Public Utilities Commission, said Wednesday the next project is really big and really important for Hetch Hetchy Water and Power to ensure the nearly 100-year-old tunnel will last at least another century.

The San Francisco Public Utilities Commission just gave notice to Michels Corporation to proceed, so that they can prepare to start work on site.

Recent shutdowns of the tunnel included repairs on the tunnel lining, contact grouting tests, drilling holes, and pressurized grouting in early 2019, Ritchie said, and two years before that, a major inspection with interim repairs, and improved access at manhole entrances to the tunnel called adits for about two months in early 2017.

Longer shutdowns of the tunnel happen less frequently. The previous major shutdown before 2017 was in 2008, and before that it was in 1989, Ritchie said.

The project will include installation of a big valving system on the downstream end, to eliminate the need for draining Priest Reservoir each time Hetch Hetchy Water and Power shuts down the tunnel.

Hetch Hetchy Water and Power also wants to remove the giant bulkhead that seals up the tunnel with 40 nuts and bolts, Ritchie said. It’s a big job to open the tunnel and close it again. The new valving system will make it easier to close the tunnel and allow easier access to the tunnel from Priest Reservoir. On dry ground above the reservoir, there are plans to install a new adit entrance into the tunnel, Ritchie said.

“I’m sure it will create new jobs,” Ritchie said of the project, but how many jobs that will mean in Tuolumne County remains to be seen.