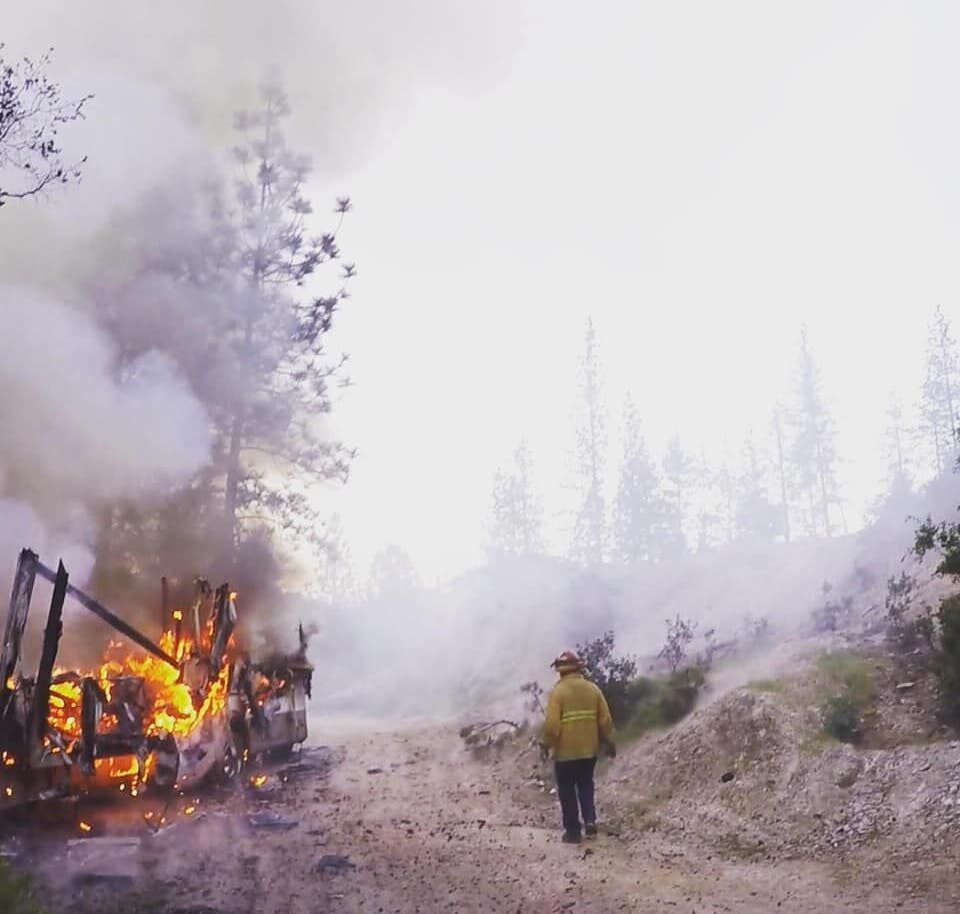 An unoccupied RV was destroyed after catching fire on April 14 just above where homeless people reside in an area known as Camp Hope off Stockton Road near downtown Sonora. 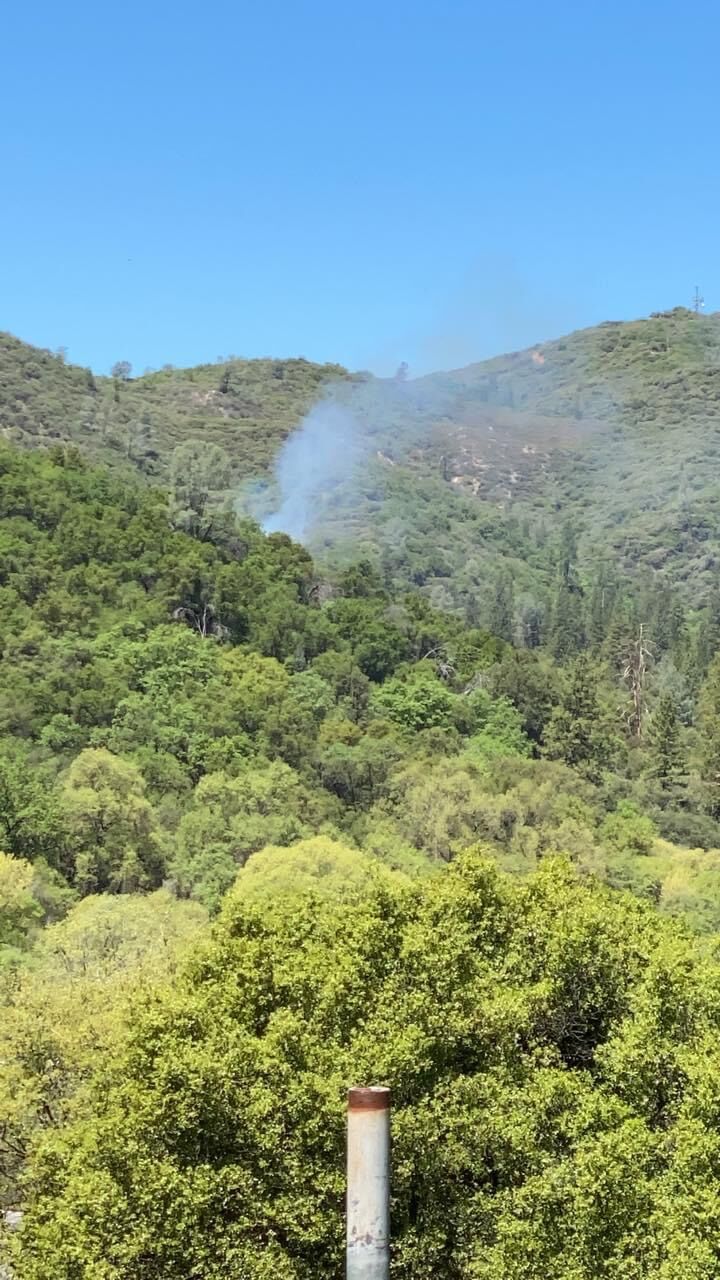 A cloud of smoke rises from a small blaze Sunday afternoon in a homeless encampment off Stockton Road, across the street from an area known as Camp Hope.

An unoccupied RV was destroyed after catching fire on April 14 just above where homeless people reside in an area known as Camp Hope off Stockton Road near downtown Sonora.

A cloud of smoke rises from a small blaze Sunday afternoon in a homeless encampment off Stockton Road, across the street from an area known as Camp Hope.

Two blazes in the past week at homeless encampments near downtown Sonora are fueling concerns for fire officials about the ongoing danger posed to the city.

City firefighters extinguished a blaze that was initially reported about noon on Sunday in an encampment off the east side of Stockton Road across from an area known as Camp Hope, where multiple agencies responded on April 14 and put out a fire that destroyed an unoccupied RV.

“I have huge concerns about the homeless encampments because they have no regard for anyone but themselves,” Sonora Fire Chief Aimee New said in an interview on Monday. “It’s only a matter of time before the temperature is high enough, humidity is low enough, and fuels are dry enough that a fire will take out the city and part of the county.”

New said she loses sleep at night thinking about the ever-present threat if a warming or cooking fire gets out of control at the encampments, in particular because the topography of the area and direction of winds means one will likely burn toward the city at a fast pace.

A city fire engine, two Cal Fire engines, a Jamestown engine and Mono Village engine responded to the area across from Camp Hope on Sunday and spent more than five hours containing the blaze, which New said burned about a third of an acre and didn’t result in any reported injuries.

“They had to do a lot of work with chain saws to cut a line in the heavy brush around the fire,” she said, adding that aircraft from Columbia Air Attack Base weren’t available to assist at the time because the agency wasn’t scheduled to begin staffing its summer response until Monday.

New said the cause of the blaze is under investigation, and no one was at the scene when crews arrived, but it was surrounded by items indicating people had been camping in the area and potentially spread from an escaped cooking or warming fire.

The east side of Stockton Road where the fire was on Sunday is city jurisdiction and consist of several parcels owned by different entities, including the city, Caltrans, and several private citizens, while the west side where Camp Hope is located is part of the unincorporated area of the county.

“We’re investigating to determine if it was on city, Caltrans or private property,” New said of Sunday’s fire.

New noted how the city has taken actions in recent years intended to help address the situation along Stockton Road, including a no-burning ordinance adopted by the city council in 2016 that she proposed shortly after becoming chief.

The ordinance doesn’t altogether ban cooking and warming fires due to other laws that supersede it, but people still could be fined or arrested if they’re determined to be criminally negligent or don’t follow the same requirements as a burn permit.

Another ordinance recommended by Sonora Police Chief Turu VanderWiel and adopted by the city council in 2019 provides a way for property owners to request to have someone trespassed who is on their land without permission, which was recently used to clear out a homeless encampment behind the Lowe’s store on Old Wards Ferry Road.

New encouraged people to make sure no one is staying on their properties illegally due to the potential for liability.

“They (property owners) need to remember they could be held liable if a fire starts on their property and goes onto others,” she said.

City Administrator Mary Rose Rutikanga said they have been urging Caltrans to do something about the encampments across from Camp Hope because most of the area is the agency’s right-of-way, but current regulations prevent it from moving people out of homeless camps during the COVID-19 pandemic.

Rutikanga said the city is also working with the county to address the situation at Camp Hope.

“We are trying hard to mitigate fire danger and work with the county to find dignified solutions for our homeless population,” she said.

City firefighters helped the Tuolumne County Fire Department and personnel from Cal Fire to extinguish a fire to an RV shortly after 7 p.m. April 14 in an area on the side of Camp Hope just above where most people reside. There were no injuries reported, but the vehicle was completely destroyed.

Andy Murphy, chief of the Tuolumne County Fire Department, said both the cause of the fire and who owned the RV were still under investigation as of Monday afternoon.

Murphy said there is “definitely concern” over a seemingly increasing number of fires in the area of Camp Hope and that his department is involved with discussions between the county and state agencies that are investigating environmental concerns at the site.

“We’re looking to take action, but it’s such a complicated issue with the property owners, state agencies, homeless advocates and the rights of the homeless,” he said.

It was revealed early last year that the county Environmental Health Division was conducting an investigation with the state Department of Resources, Recycling and Recovery, or CalRecycle, regarding contaminated soils from a former dump that operated in the area where Camp Hope is located and potentially pose a health hazard to people living there.

Hazel Mitchell, co-founder of the organization Give Someone a Chance that provides aid for the county’s homeless population, said the uncertainty over the future has created a sense of anxiety and nervousness among residents at the camp.

Another issue that Mitchell cited for creating issues at Camp Hope that illustrates the complex nature of the issue was the recent clearing of the encampment near Lowe’s, which she said was populated by some people who had previously been evicted from Camp Hope and have now moved back.

Mitchell also said another problem has been the lack of access to county behavioral health services due to the pandemic.

The county Board of Supervisors recently formed an advisory committee on homelessness and appointed Mitchell’s organization as a voting member, though she doesn’t believe any solutions will come out of that soon because they are still in the process of creating bylaws for the group.

Mitchell emphasized that her organization has never been in charge of Camp Hope but has helped to gather the funding for amenities that include portable toilets, a water tank and regular trash service, which were intended as a pilot program to determine how a more structured, designated homeless camp would operate.

“I understand 100 percent the fire chief’s problem. You’d have to be dumb not to understand that the wind could catch it and bring it right into town,” said Mitchell, who owns commercial buildings in the downtown area. “But what are our options for this? They’re not giving us any.

“We’re talking about human life here, our neighbors, our loved ones, people who were born and raised here. We’re talking about people with very, very deep mental problems to where they should actually be hospitalized long term, but we closed all the mental institutions and now they’re out on our streets.”