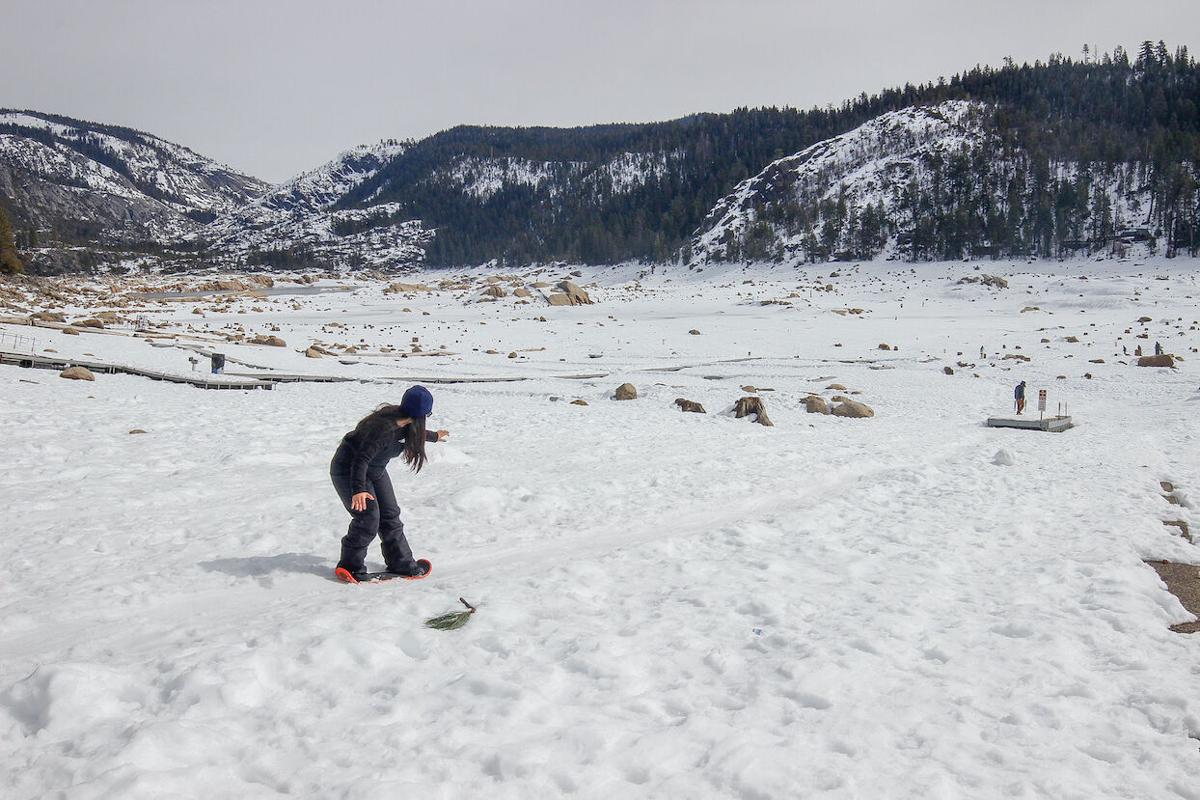 Leslie Maldonado, of San Diego, tries out a snow skate, similar to a skateboard without wheels at the Pinecrest marina on Feb. 18. 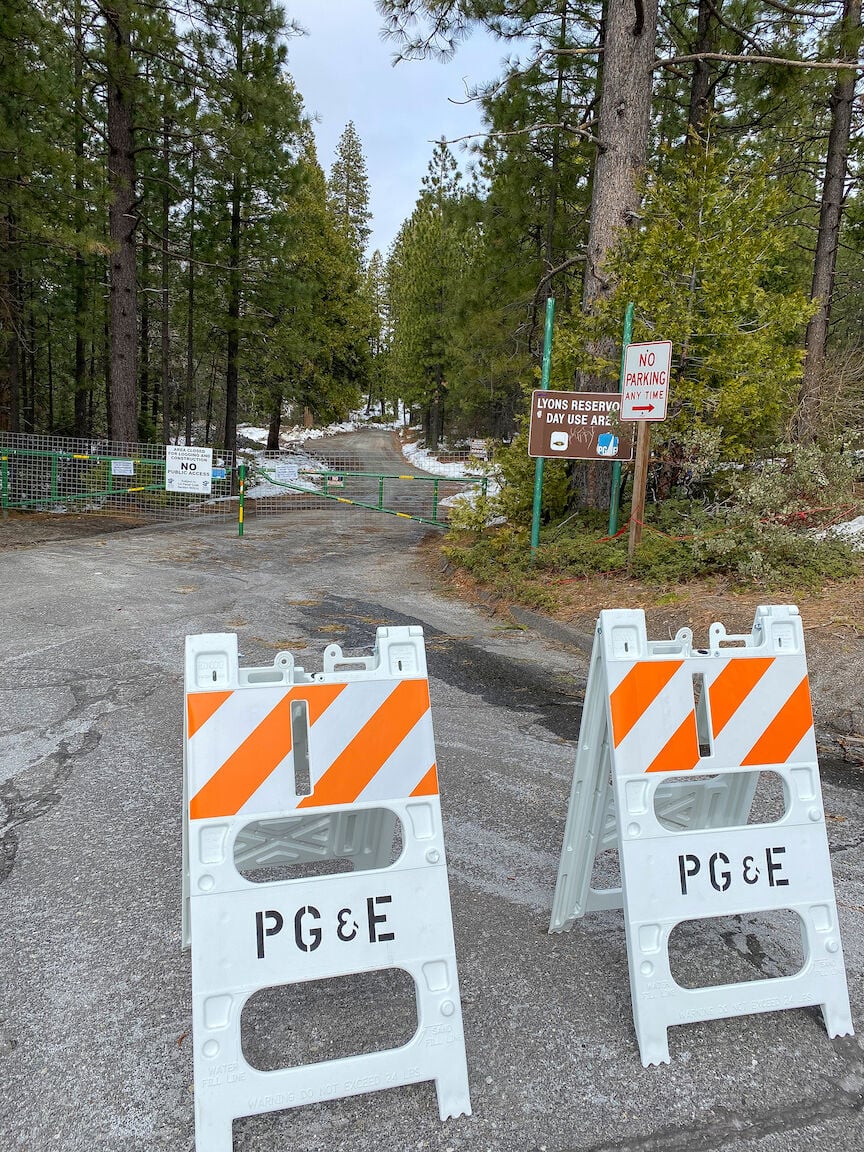 Roadblocks stand in the road near the entrance on Highway 108 to Lyons Reservoir, owned by Pacific Gas and Electric Co. 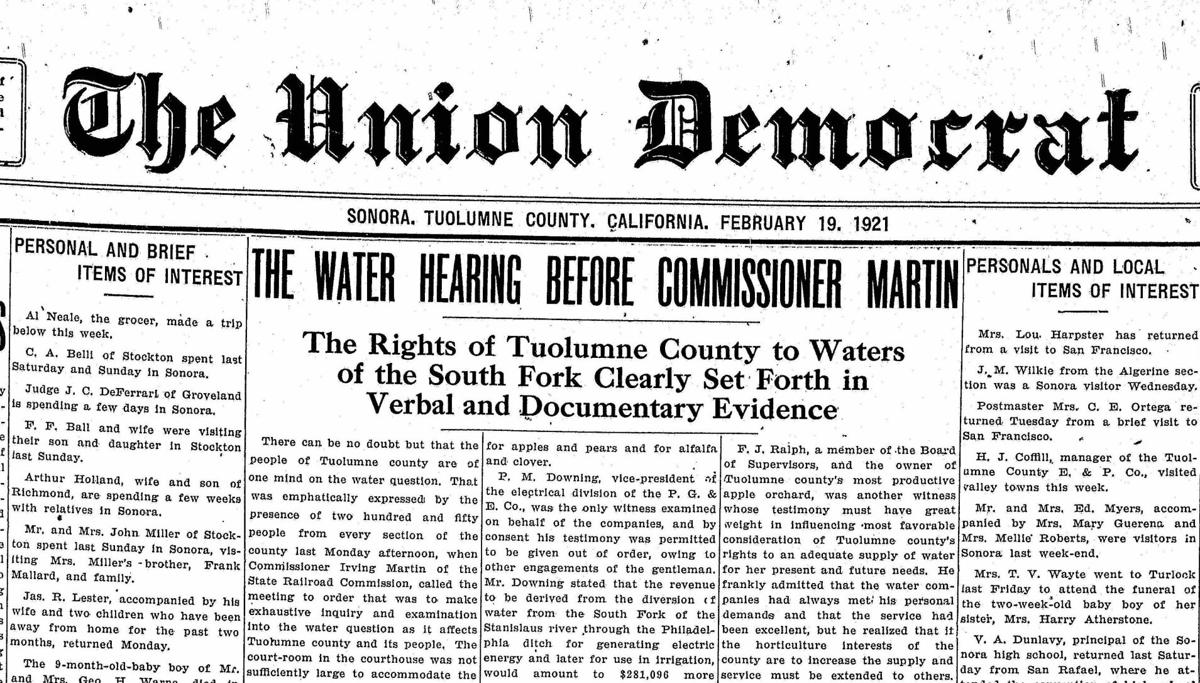 A newspaper article from Feb. 19, 1921, shows that waters rights in Tuolumne County were a hot topic 100 years ago.

Leslie Maldonado, of San Diego, tries out a snow skate, similar to a skateboard without wheels at the Pinecrest marina on Feb. 18.

Roadblocks stand in the road near the entrance on Highway 108 to Lyons Reservoir, owned by Pacific Gas and Electric Co.

A newspaper article from Feb. 19, 1921, shows that waters rights in Tuolumne County were a hot topic 100 years ago.

Tuolumne Utilities District provided an update on Thursday regarding negotiations to acquire Pacific Gas and Electric Co. assets in the South Fork Stanislaus River watershed and rights to water in New Melones Reservoir, though the possible costs remain unclear due to a confidentiality agreement.

The TUD Board of Directors hosted a rare joint meeting via video with the county Board of Supervisors, Sonora City Council, local Me-Wuk Indian tribes, and other stakeholders, during which members spoke about the need for community-wide cooperation and collaboration due to the scope of the undertaking.

“This is not a TUD, Tuolumne Utilities District, deal. This is an entire Tuolumne County deal,” said TUD Director Ron Ringen, vice president of the board. “TUD just happens to be the one entity that’s able to maybe, hopefully, bring this thing to a conclusion for all of Tuolumne County.”

TUD announced in March last year, just before the COVID-19 pandemic took hold, that it had entered exclusive negotiations with PG&E to acquire the company’s Phoenix Hydroelectric Project, between Sonora and Long Barn, at the upper end of the TUD-owned Tuolumne Water System.

The project includes the Phoenix Powerhouse, Lyons dam and reservoir, the Tuolumne Main Canal, and pre-1914 water rights, which are some of the most sought after in California because they take precedence during times of scarcity such as a drought.

In addition, TUD would also acquire Strawberry Dam and Pinecrest Reservoir that are part of PG&E’s Spring Gap-Stanislaus Hydroelectric Project, because about 95% of the water that the district serves to some 44,000 residents originates in the South Fork Stanislaus River and is impounded in both Lyons and Pinecrest reservoirs.

“One of the key, and frankly most important, assets that come with these projects are the water rights,” said Tom Johnson, TUD’s chief negotiator in the process.

The rights date back to the 1850s when miners formed the Tuolumne County Water Co. to provide water for working gold mines in the Columbia area through a ditch system that remains part of how TUD conveys water to this day.

In 1909, the company’s assets and water rights were sold to the Sierra and San Francisco Power Co. that was later itself purchased by PG&E.

All of TUD’s current water supply from Lyons and Pinecrest reservoirs is provided by PG&E each year for free under a contract when the county purchased the ditch system in 1983, which stipulated the utility would supply the water in perpetuity and that the county would not apply for water rights on the river.

Johnson said that PG&E first approached TUD about selling the Phoenix Hydroelectric Project because it has been trying to get rid of assets that are generating less revenue than the cost to operate and maintain them, though he couldn’t disclose the numbers due to a confidentiality agreement in case the deal with TUD falls through.

The district would need to make up the revenue elsewhere to cover the costs if it acquires the assets, Johnson said, such as through rate increases, a tax, or bond measure.

Some people who spoke at the meeting expressed concerns about the potential costs on TUD customers due to current rates already being high, which Johnson said will have to be part of the discussion within the community prior to executing a purchase agreement.

Johnson said progress has been somewhat hindered by the COVID-19 pandemic and inability to negotiate in person, though he estimated a purchase and sale agreement will take about a year followed by 18 months to get the necessary licenses, permits and train TUD staff to operate the facilities.

One of the arguments in favor of acquiring the assets is because PG&E will likely look to another buyer if TUD doesn’t purchase them, which wouldn’t have to honor the 1983 contract that has served the community up until now.

The possibility of another private entity potentially purchasing the assets and looking to make money off the water provided to the county was discussed, which was something that TUD Director Jeff Kerns said scares him and should scare everyone.

“No matter what we finally agree to with PG&E on what this system may cost to operate or to take care of into the future, we’re going to pay for it, our ratepayers are going to pay for it, whether we own it or we don’t,” he said. “I think it is imperative … that we get this deal done, that all of us lock arms and march forward in lockstep, because our future generations depend on it.”

Many of the other elected officials who participated in the meeting seemed to be in agreement with Kerns.

County Supervisor Ryan Campbell, who serves as board chairman, said he believes it’s an issue that affects all public agencies in the county, but they will need to be clear with people that the process will be “long, difficult, and potentially messy.”

“This is a once-in-a-lifetime opportunity to truly right a wrong, a crime that was done against future generations of Tuolumne County residents,” he said. “Surrendering these water rights has caused difficulties that have rippled through this county for a generation.”

John Buckley, executive director of the Central Sierra Environmental Resource Center in Twain Harte, spoke in opposition to TUD acquiring the assets and said he felt that the discussion had been mostly one sided.

Buckley said it was “total speculation” at this point that PG&E would sell a money-losing system to another entity that would turn around a break the contract for free water in perpetuity, but the district would have to spend millions of dollars to take it over.

“It is really sad for me to, before there has been a full discussion of both sides, to see county supervisors, other politicians and board members here endorsing the acquisition of PG&E’s facilities without even a clear understanding of many of the mitigations, or requirements, or costs that would be there,” he said.

Shaun Crook, a member of the Tuolumne County Farm Bureau, said he couldn’t tell his organization to support the idea without more details about how it would potentially affect rates for agricultural customers. While he noted that he’s not against the idea of acquiring water rights, he felt ag interests have been left out of the discussion.

Another man who identified himself only as “David” expressed similar opposition as Buckley and said he heard it cost PG&E nearly $1 million to repair a weeklong outage. He also asked whether anyone other TUD would buy the assets because they are losing money.

Jesse Barton, TUD’s attorney, said it’s “not a leap” for him to think of a third party buying the assets because he’s been contacted by a number of entities looking to purchase water rights so they can capitalize on them during times of drought.

Barton said the question is now whether people want the owner of the system to be a for-profit entity that would pass on the costs associated with it in addition to make money on top of that, or a public agency like TUD that would do the work at cost.

“Yes, the 1983 contract was a wonderful deal, it provides free water. That’s in the past,” he said. “What we’re confronted with now is a new paradigm.”

In addition, Barton provided an update on negotiations with the U.S. Bureau of Reclamation for a contract to water from New Melones Reservoir that the county was originally promised as part of an agreement allowing for the development of the facility.

A contract with the bureau, which the TUD board voted to pursue in late 2019, would help to diversify the district’s water sources so it’s not solely reliant on the South Fork Stanislaus River.

Barton said the process is expected to take about two to three years to complete and would provide backup water for TUD during times of emergency, such as drought or to fight fires, in addition to cover future needs that could be affected by development and climate change.

The cost for the water from New Melones would be $45 to $70 per acre-foot, as well as $193 per acre-foot for electricity costs to pump the water out of the reservoir.