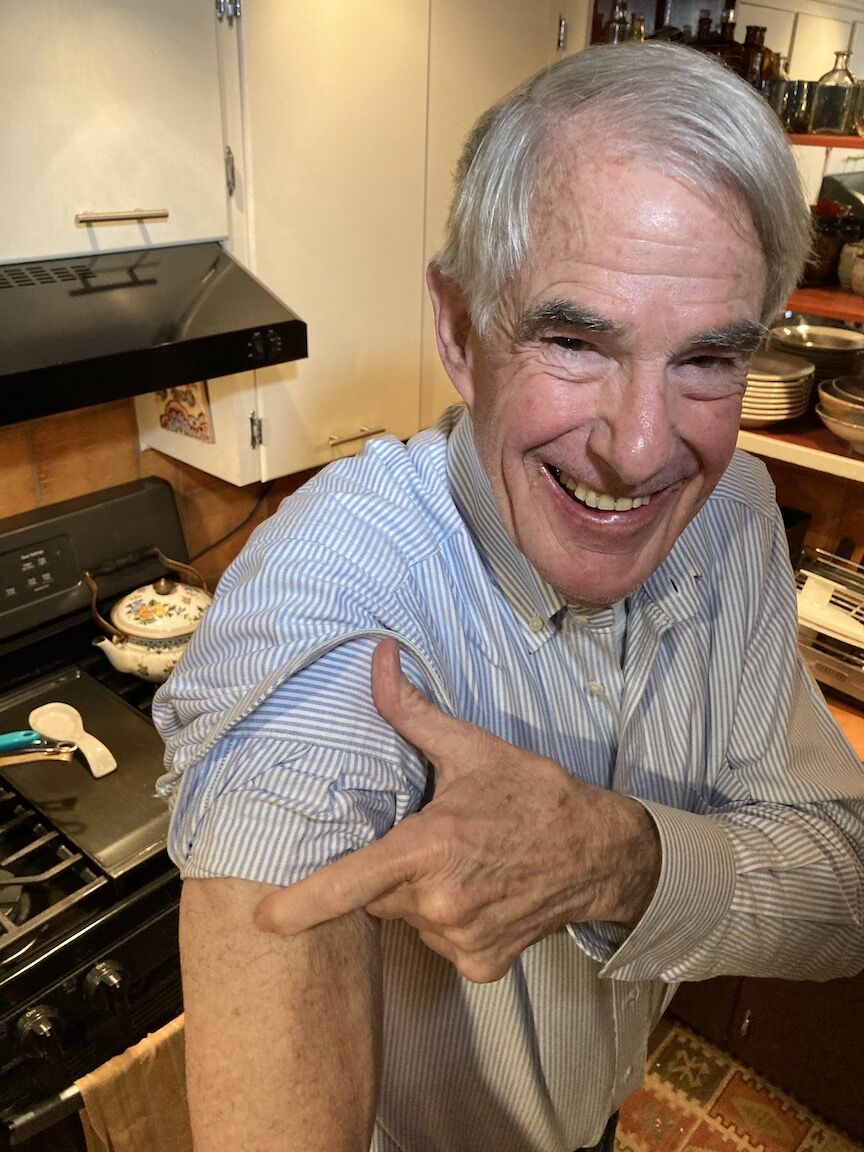 Telling 'em where to stick it: Bateman is still waiting for a shot. 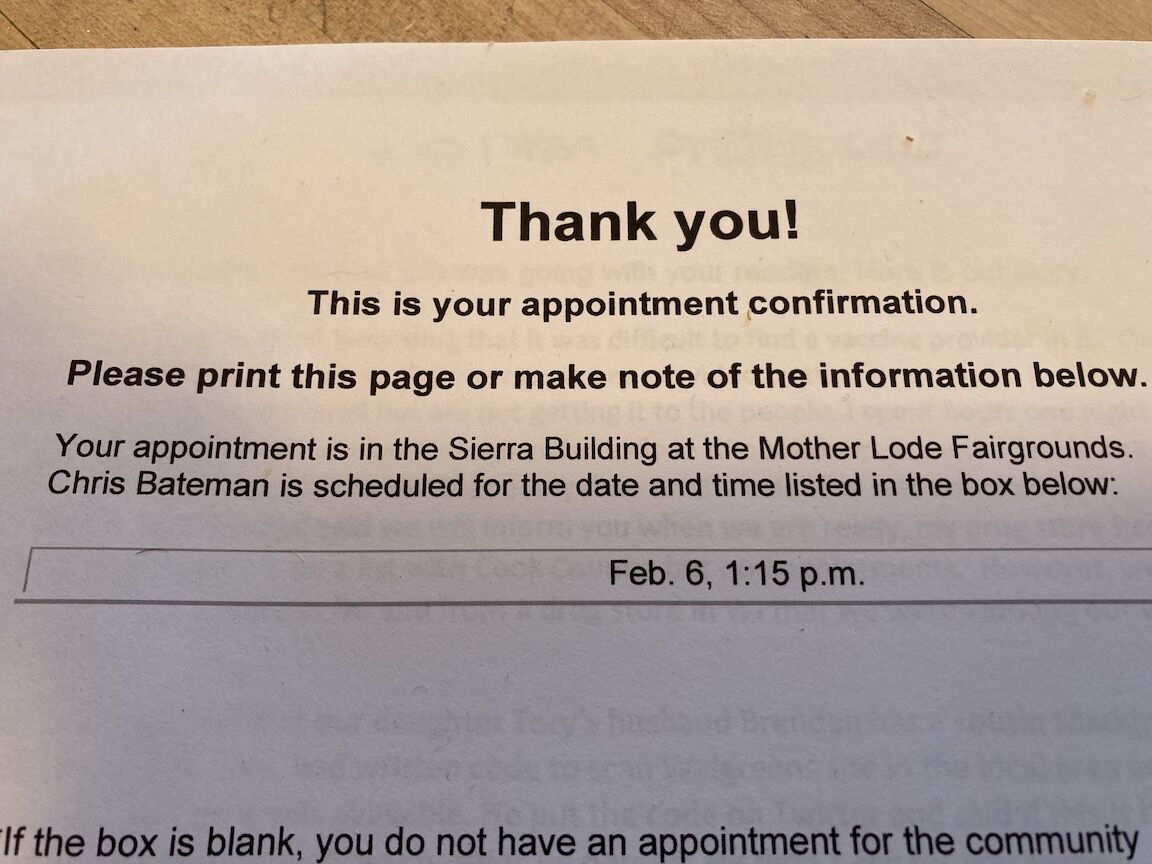 Not worth the paper it was printed on: Reporter Bateman's Saturday vaccine confirmation.

Telling 'em where to stick it: Bateman is still waiting for a shot.

Not worth the paper it was printed on: Reporter Bateman's Saturday vaccine confirmation.

It’s like I had all at once won the lottery, was given 50-yard-line Super Bowl tickets and had front-row seats for Dead and Company.

In late-60s drug parlance, I had scored and I was holding.

It was not a dream: On Friday I had my Adventist Health Sonora appointment confirmation in hand. Bring your ID, come down to the Mother Lode Fairgrounds tomorrow and it will happen, it read. I was getting a COVID shot and it would come within 24 hours.

“Your appointment is in the Sierra Building,” read the one-page notice.  “Chris Bateman is scheduled for the date and time listed in the box below: Feb. 6, 1:15 p.m.”

Until that piece of paper was in my hands, I was unsure. But once it was, all doubt vanished.

I told my kids, who were all ecstatic. I called a bunch of fellow geezers, who were at once happy for me and envious.

On Sunday, I would drive to Arnold to watch the Super Bowl with old friends who got their own vaccines a few weeks ago. “Now I have one too,” I would tell them. “So we’re all a little safer.

“Get someone to take a photo of you getting that shot,” said Alex MacLean, The Union Democrat’s managing editor. He knew I’d be writing a joyous post-immunization story.

I stuck a Zelda’s Chicago-style pizza in the oven Friday afternoon and cracked open a celebratory fake beer — which is about as wild and crazy as this recovering alcoholic ever gets.

I was on a Pfizer high, which lasted maybe two hours. That’s when my friend Dave Urquhart called.

“I got bumped,” he told me. “Just got the call from Adventist.”

Yes, he said, the hospital’s caller was polite, sincere and good-natured. But a bump is a bump.

It made no sense. Dave was right there in my 1:15 vaccine group. He also had a printed confirmation.

“A computer screw-up,” he said. “They overbooked.”

This was a gross understatement:

The Feb. 6 Fairgrounds clinic was originally reserved for those 75 and over. But not enough Super-Geezers signed up, leaving some 350 available slots.

So Adventist announced that online signups would open to us 65- to-74-year-old ordinary geezers at precisely 9:30 a.m. Friday

Word spread quickly. I heard about it from three friends Thursday, then relayed it to three more. This geometric progression apparently continued.

At the stroke of 9:30, the cyber floodgates opened. By 9:37 the powers that be at the hospital realized something was terribly wrong.

The 350 available slots for Saturday’s clinic were filled, but then Adventist’s computer program — apparently not wanting to leave any of us oldsters disappointed — began filling these already-occupied slots again and again.

Overbookings, apparently, were happening at the rate of more than one per second before the hospital staff discovered the mega-glitch and shut the program down.

Next, a squad of about 30 operators were recruited to let some 500 of us newly and unjustifiably ecstatic geezers know the truth: We were SOL. None of us would get shots Saturday. Dave’s wife, Teree, and their friend Marilyn were among the politely bumped casualties.

When my phone rang an hour after I had talked to Dave, I knew it was Adventist. “OK, give me the bad news,” I said.

Leslie, the operator, just laughed. “Our appointment program was overwhelmed,” she explained.

I tried to stay upbeat: “You must have known there would be a huge response,” I suggested.

According to census figures, there are more than 13,000 of us 65-to-74 regular geezers in Tuolumne County. We are old and getting older. COVID is breathing down our necks. We are all eager to enjoy the diminishing number of good days we have left.

So you can understand how much all of us wanted shots.

“Well, yes,” Leslie agreed. “We knew there would be a significant response. But our system had been able to handle this kind of thing before.”

She was apologetic, understanding and hard to get angry with. Plus, she promised to put me on the hospital’s “Priority Wait List” for future clinics.

“You’ll be getting your shot in a week or two,” she assured me.

No, I did not demand a notarized, printed statement to that effect. Nor did I ask for Leslie’s last name and a phone number so I could reach her and vent should her assurances to prove untrue.

That’s because I really wanted to believe her.

Turn the clock back two days, before Adventist opened up its clinic to us younger oldsters:

Could I have imagined then that I would get a shot Saturday? Not in my wildest fantasies. (Although at my age I am not likely to fantasize wildly about much).

And, if told I would get a COVID vaccine within two weeks, would I be happy? The answer is an unqualified yes.

I was letting myself think I might get a shot some time in February. But until this weekend’s near miss, I was by no means sure I would.

No, I did not get a vaccine Saturday.  But now, thanks to Leslie, I really believe I will get one within two weeks.

Well, Leslie, I am a highly trained, if somewhat out of practice investigative reporter. So I will track you down and demand an on-the-record accounting.

And if you again apologize profusely, admit you were a week or so off, and then assure me I will get my shot by the end of the month…well, yeah, I’ll probably still be OK.

But if we get into March and I’m still unvaccinated, all bets are off.