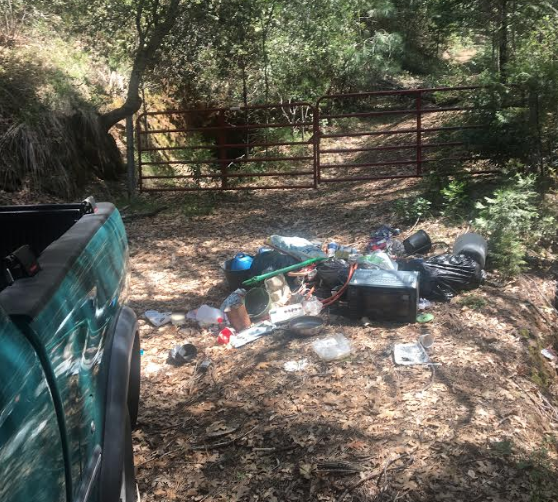 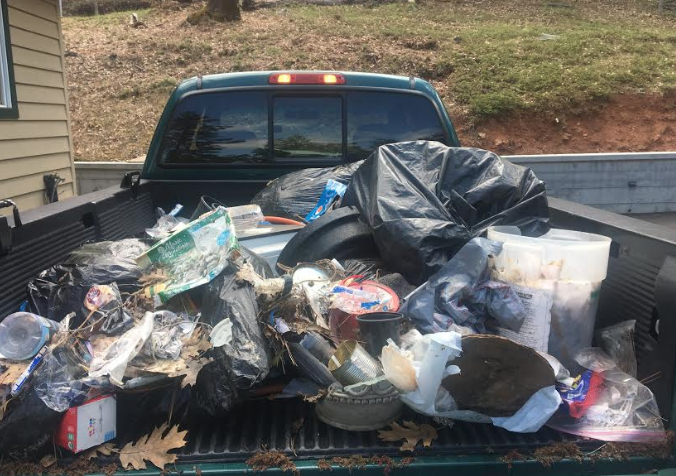 Next we have Tai Pei sweet-and-sour chicken, 100 percent Arabica coffee beans, a three-pound bag of Cutie mandarins, Skippy peanut butter (creamy) and, oh yeah, a box of Omaha steaks (I like mine medium rare, thanks).

Finally, we have a Panasonic microwave oven to cook it all up.

So, with weeks and maybe months of Covid quarantine remaining,

have I been restocking my larder?

Heck no: The inventory above includes only stinking remnants and rancid packaging from the food and drinks listed. It was all part of an illegal dump nearly a mile beyond the end of Yankee Hill Road’s pavement.

Off-loaded in the middle of the night sometime last fall, it’s a local eyesore that I for months have walked by with Lil. For a week or so, my dog would nose through the reeking rubbish, but I dressed her down and she now steers clear. (No actual Omaha steaks were left, I’m sure Lil found).

A couple of months ago I called Tuolumne County’s Solid Waste Division to report this minor atrocity. I was asked if the trash was actually on the road right-of-way.

I was routed to the enforcement officer’s desk and left a detailed message. My call was never returned.

I could understand why:  There are no doubt much larger, more egregious dumps out there. I read about one of Big Hill Road that would cost an estimated $16,000 to clean up.

The one down my road would take less than an hour to load into a pickup.

But I knew why it wasn’t: Nobody but a few of us even see this particular mess. And I doubt if anyone else has complained.

Our off-the-beaten-path wheel is not nearly squeaky enough. As a result, this dump has become part of the local landscape.

Still, it rankled me every time I walked by. “It would be so easy to clean up,” I’d grouse. “Why can’t the county just do it?”

Then, earlier this week, my question morphed into, “If it’s so darn easy to clean up, why don’t I just do it?”

God knows, I have the time. So yesterday I did it.

Although this particular heap of trash was dumped long before the Corona virus hit and has been sitting outside for at least a hundred times the supposed 48- or 72-hour decontamination period, I walked up to it fully gloved and masked.

I took photos of the cigarette butt-seasoned mess before loading it, thinking maybe I could get a cost break at the county transfer station. In fewer than 45 minutes, it was all in the bed of my pickup.

Throughout the loading process I was on the lookout for receipts, paperwork, prescription bottles or anything else that might give away the dumper’s identity. No luck: The best I could find was the name “Eric” faintly scrawled on the back of a grocery-store checkout tag.

I then tarped and strapped the load, drove to the transfer station and told the attendant that I had just cleaned the garbage from an illegal roadside dump. I added that I could prove this with a photo.

No deal: I forked over more than $20, put my mask and gloves back on and off-loaded the mess.

Yes, I now feel slightly better about myself. But I’m under no illusion that the dumping problem here on Yankee Hill Road or, for that matter, the problem countywide, is even an inch closer to being solved.

Folks far more heroic than I have tried and failed.

For a couple of decades, Columbia-area builder Jim Grossman led local cleanups by the score. More than once, he even brought a crane to Beer Can Corner, Yankee Hill’s most notorious illegal dump. There he dredged out hemorrhaging couches, ancient refrigerators, and used diapers by the hundred.

A chain-link fence put up a few years ago by the Bureau of Land Management, mercifully, has halted the Beer Can dumping, but there is more of it elsewhere

I used to joke to Grossman that he had job security. But that just wasn’t funny.  I’m not sure, but I think Jim gave up after years of trying. It was a battle he could not win.

Yes, when I walk by the now trash-free clearing down my road, I’m glad I cleaned it up. But I know it will happen again. And I know for certain that a mile later I will come upon a decaying travel trailer that someone pushed over the edge more than five years ago.

The Highway Patrol put a few cones on the dirt road right after that dump. Then the cones disappeared, but the trailer did not.

No, this is not the “new normal” and has nothing to do with Corona. Sadly, it is the old normal and likely will persist long after the virus has receded.