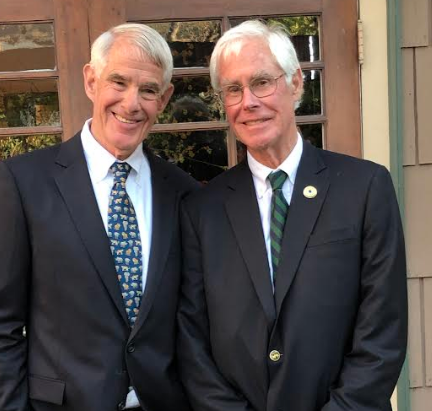 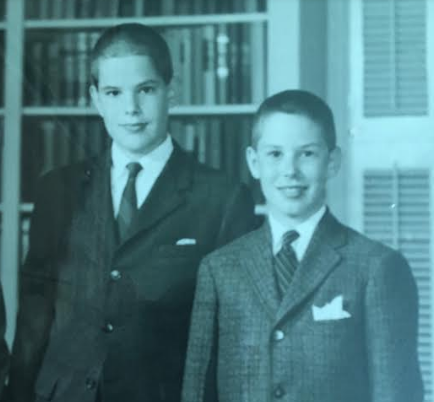 Chris Bateman, left, and his brother Chip in early 1960s, all-dressed-up in the living room of their Winnetka, Illinois, home.

Chris Bateman, left, and his brother Chip in early 1960s, all-dressed-up in the living room of their Winnetka, Illinois, home.

So Brooks Brothers has filed for bankruptcy. After more than 200 years atop the American sartorial heap, the venerable firm is in trouble.

Don’t blame me: I bought one of their suits less than two years ago, and it wasn’t cheap. I’ve worn it once, and my best estimate is that I’ll put it on twice more before I die. Then maybe once afterwards.

Credit (or blame) my daughter.

“Dad, I’d really like it if you wore a suit to my wedding,” Hallie told me several months before her ceremony last year. So I showed up at the Women’s Twentieth Century Club in Los Angeles on April 6, 2019, dressed in dark-blue Brooks Brothers threads.

I looked OK at Hallie and Jack’s wedding. But younger people in far less expensive outfits looked much better. After a certain age, there’s only so much clothes can do.

My two sons have been with their respective girlfriends for years, and one is engaged. So two weddings are likely ahead for this suit (unless the boys ask me to wear jeans).  After that, I’ll retire it.

Unless I dress up in Brooks Brothers for my own funeral. (More on that later).

But why did I choose Brooks in the first place?  Blame my parents: They began outfitting brother Chip and me in sport coats and suits when we were young.  We were forced to go to church, parties and dances all dressed up.

Brooks Brothers, our suburban Chicago parents let us know, was the gold standard for fine menswear.

But we hated dressing up. After Chip and I departed for college we never got even semi-formal.  Then came work: For much of my career at The Union Democrat, jeans and polo shirts were just fine on the job.

If I had ventured onto Sonora’s Washington Street in a Brooks Brothers suit, I would have lost all credibility. It’s like I would have become a pretend-lawyer or a banker overnight – and a pretentious one at that.

I didn’t even wear Brooks’ stuff to my own mid-80s wedding. Instead I was in a shiny, period-correct, silver-gray tux that looked like something out of a Travolta disco movie.

But Chip, who lived in cities and was in the business world, became a Brooks Brothers customer. He has a sense of style, and was my go-to guy as I geared up for Hallie’s wedding.

Chip escorted me into a Phoenix Brooks Brothers outlet several months before the ceremony and made all my decisions for me. The resulting suit fits perfectly and looks great.

It should, as my pro-rated cost per-use will be several hundred dollars.

A side benefit, however, is that I am now on Brooks’ email list. I get dispatches on such topics as “decoding collars and cuffs,”  “the six pocket-square commandments,” “the elusive white tie” and “shirt details that define your style.”

Buying that wedding suit, I was sure I couldn’t go wrong with Brooks. But reading news accounts of the venerable firm’s bankruptcy filing, I’m not as certain.

The company, according to The New York Times, “buckled under pressure from the coronavirus pandemic after years of faltering sales, as customers embraced more casual apparel and sales shifted online.”

With most of us are stuck at home, times are indeed bad: Who on earth would order Brooks Brothers stuff now? And for what?

My own daily fashion decision is which T-shirt to wear with which pair of shorts. Zoom conferences are about as formal as anyone gets. And are you really going to gussy up in Brooks garb for a two-minute gig on the boss’s laptop?

Not only that, but the Times described Brooks suits as “somewhat boxy” and as “a less fashion-centric riposte to the more structured English tailoring and more showy Italian style.”

Funny, that’s exactly what I had been thinking!

Which brings me to the potential final wearing of my Brooks Brothers suit:  My own funeral.

Trouble is, I’m opting for cremation and I’m not sure I’d want that suit to go up in smoke with me. Really, how would the expensive, all-wool Brooks ashes mix with mine?

Finally, I’m looking into the beyond: If I show up at the Pearly Gates in a Brooks Brothers suit, will that enhance my somewhat slim chances of getting in?

So maybe I’ll leave my suit to Sierra Repertory Theater as a period piece, to a Sonora second-hand store, or even to my kids.

Because who knows? If Brooks really does go out of business, that 2019 suit just might be worth something.