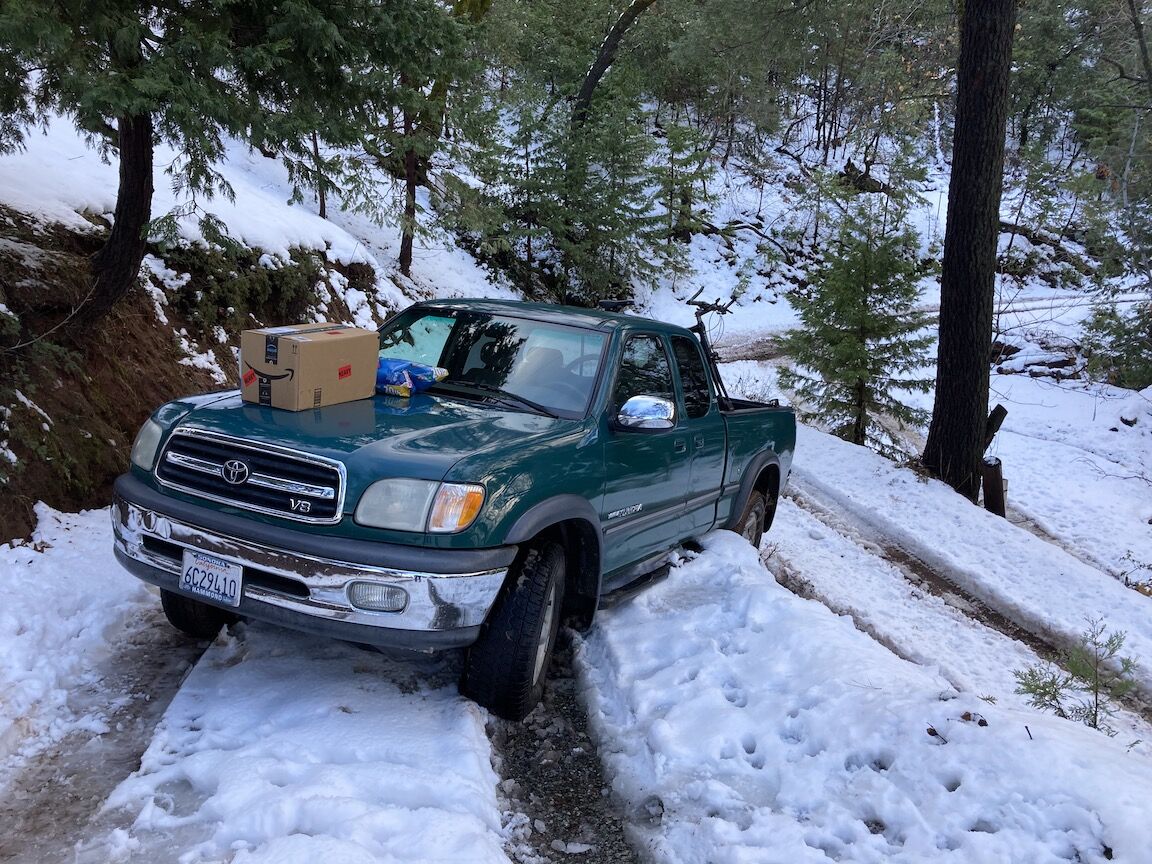 My previously invincible Tundra truck, hopelessly stranded on my own driveway. 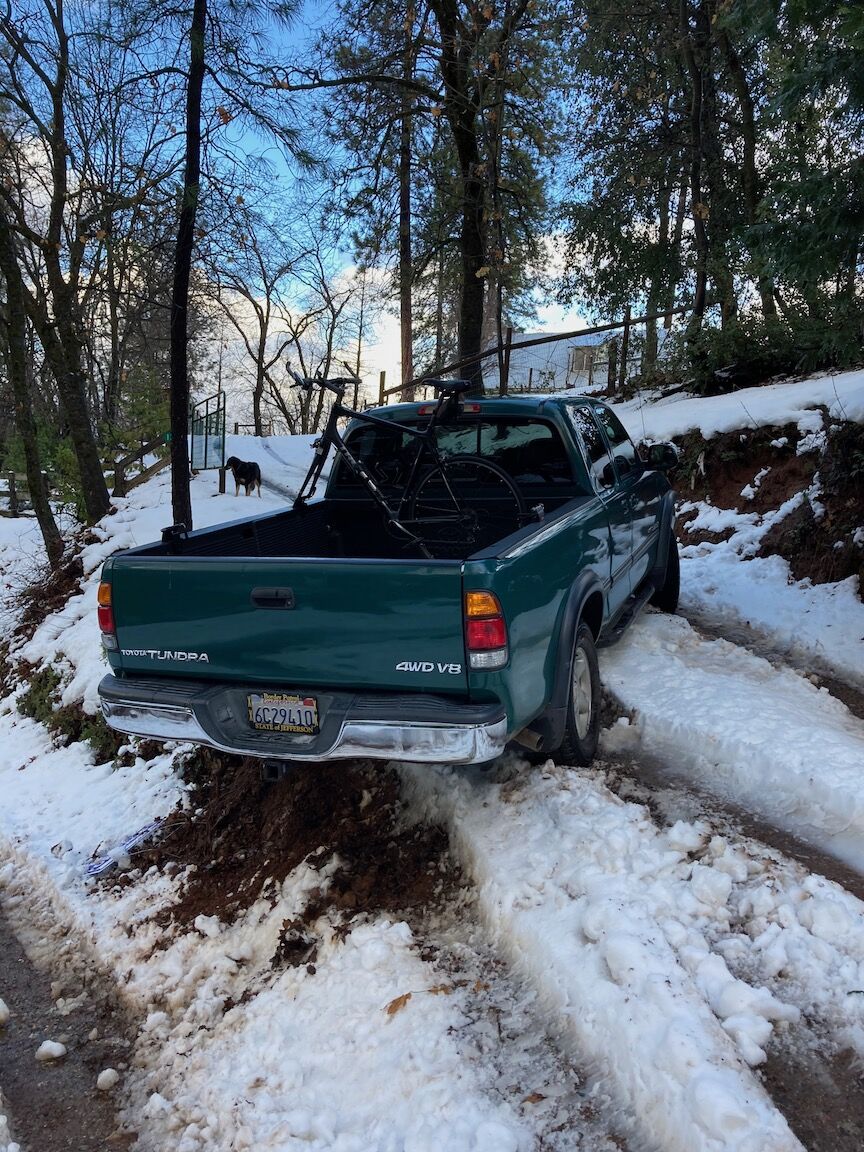 My previously invincible  Tundra truck, hopelessly stranded on my own driveway. 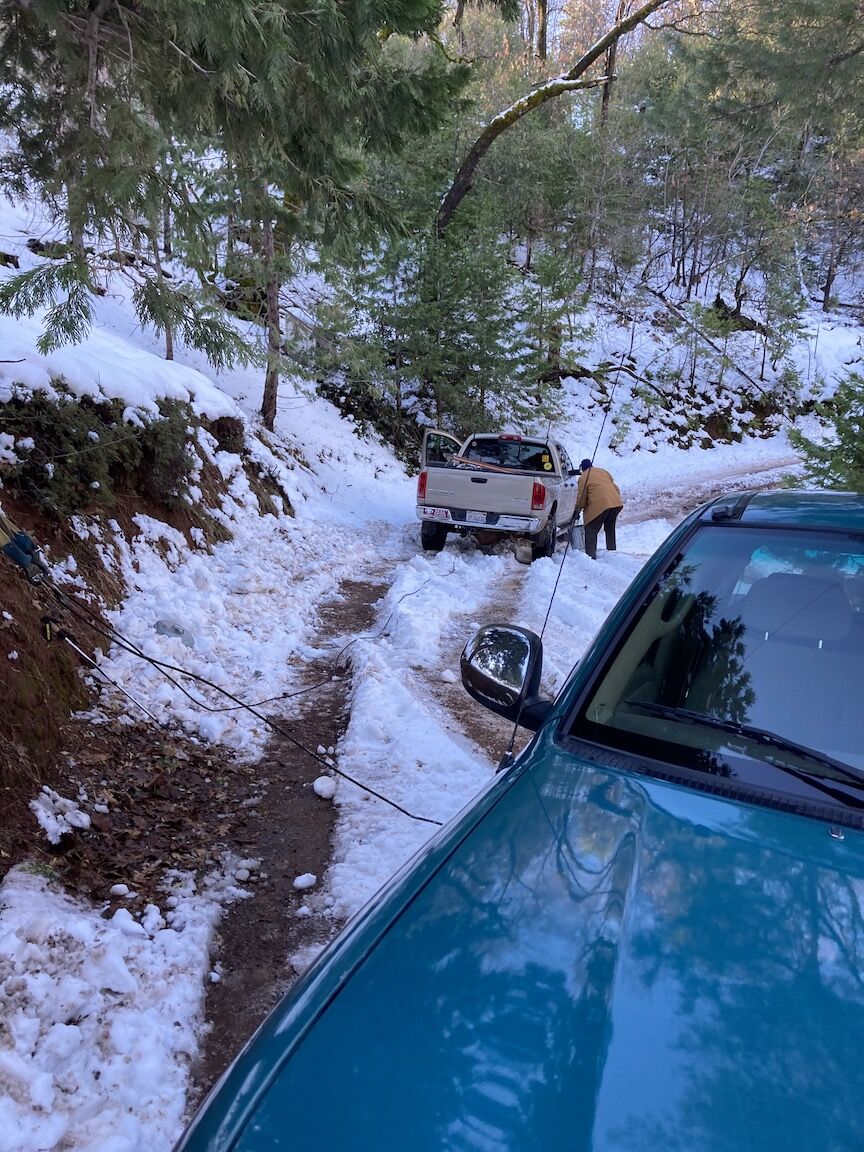 Yankee Hill neighbor Mark, in the process of rescuing my stranded pickup.

My previously invincible Tundra truck, hopelessly stranded on my own driveway.

My previously invincible  Tundra truck, hopelessly stranded on my own driveway.

Yankee Hill neighbor Mark, in the process of rescuing my stranded pickup.

Decades ago I came to this conclusion: Chaining up cars sucks.

The work is wet, cold and invariably takes much longer than you think it will. You end up dirty, frustrated and cursing. Not only that, but you worry that you didn’t install the chains quite right and that once you get going, they’ll slip off the tires and end up wrapped hopelessly around the axle.

Which would suck far more.

So back in the early 1990s, our family began buying four-wheel-drive SUVs — which in TV commercials could go anywhere in any weather. On the tube you’d see these utes cruising through 2-foot drifts and leaving impressive plumes of snow behind while the kids smiled and laughed in the back seat.

“Top this, Admiral Peary!!” they seemed to be saying.

But, I soon found, these family four-wheelers could not go anywhere in any weather. I had to chain mine up several times and got hopelessly stuck once.

My answer? Several years ago, I bought a Toyota Tundra pickup truck with a V-8 and not only four-wheel-drive, but a low range that moves the truck inexorably along at the speed of a fast tortoise. Next, I outfitted my pickup with super-aggressive mud-and-snow tires with canyon-like tread grooves.

Over the past few years, I came to believe my Tundra could get me anywhere. I had powered through the worst snow storms Yankee Hill could dish out with nary a shimmy. I drove up to visit friends in Arnold, where the snow is even deeper. No sweat.

I still had a set of chains in the cab, but my goal in life was to never, ever use them.

By now, readers, you might see where this story is going. Or not going.

My undoing came late last week, with home literally in sight. I was finishing my third round trip to Sonora since the storm dumped a foot of snow on Yankee Hill early in the week.

By Friday most of that snow had melted. And my earlier trips had left tire tracks in my driveway’s steepest pitch. On approach, I shifted into low range to power through the slurry of mud, snow and slush ahead.

My truck said no. With a mind of its own, its tail end slid leftward off the driveway and a foot or two down the short slope between it and Yankee Hill Road. I was high-centered and going nowhere.

I did not panic. Instead I called AAA, my habitual, ever-reliable saviors since I joined up in the 1970s. “So you’re on a dirt road?” the agent asked. “More than 100 feet from pavement? We won’t cover that. You’ll have to pay the towing service.”

A minute later I was on the phone with a Sonora-based tow-truck dispatcher.  “Can’t get there,” she told me. “Too much snow, too much mud, too many calls.  Call back when it’s dry. No, no — not when snow has melted. When it is actually dry.”

“You mean, in April?” I sputtered, amazed that my erstwhile saviors were failing me when I needed their help the most. “When it’s dry,” she repeated.

Which left me, figuratively at least, high and dry. More accurately, my once-trusty truck was blocking my own driveway. I was stranded. What if I catch COVID? What if my vaccine is ready?

But I was not out of options. I called my neighbor Mark, which is like breaking the fire-extinguisher glass when flames are licking at your feet.

Mark can almost literally do anything. Over many years he has gotten me out of one jam after another. When it comes to mechanical, automotive, building, plumbing and other real-world problems, he can solve nearly all of them.

I’m a writer and an English major, but Mark has a larger vocabulary than I — mostly because he can name about a thousand parts and tools that I’ve never seen or heard of. What’s more, he owns and knows how to use most of them.

At the same time, he finds some humor in my own lack of practical abilities. He claims that I once called him for help screwing in a light bulb — which may or may not be an exaggeration.

Still, Mark is invariably gracious, and promised to extricate my truck in the morning with his own Ram pickup, a cable, and a snatch block. And if you asked me to draw a picture or give a definition of “snatch block,” I shudder to imagine what I’d come up with.

Anyway, on Saturday morning Mark secured one end of a cable to my truck’s rear spring, routed it to a nearby cedar via the aforesaid snatch block, then wound it back to his own pickup’s hitch. Next he got in the Ram’s cab, gave a pull — and with some alarm I saw the cedar’s roots move.

“Wimps!” was Mark’s response when I told him of the tow outfit’s refusal to brave fewer than five inches of melting snow.

Could I have prevented this misadventure? Highly likely.

“You shouldn’t have used low range, ” Mark advised. “With a regular four-wheel you would have been going a bit faster and probably made it up. Also, you should put some weight in the bed, maybe sandbags, for better traction.”

But, still seeking to shift some blame, I went down to Wright’s Tires in Sonora for an inspection of my once-aggressive mud-and-snows. “They still look pretty good,” was the verdict. “They have some miles left.”

Which means, yep, this predicament was 100% my own damn fault.

If there’s any consolation, it’s that even at age 74 life can still teach you lessons.

So, yes, I’ll be more careful and cautious in the future. But I’m still not going to put those chains on.