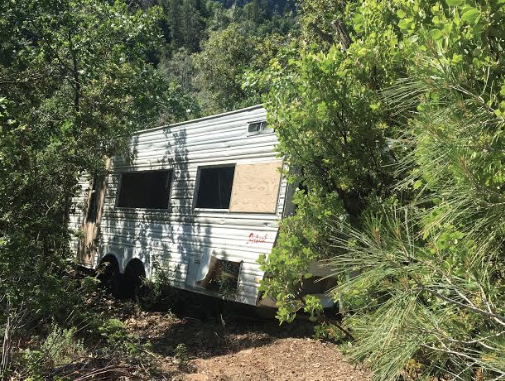 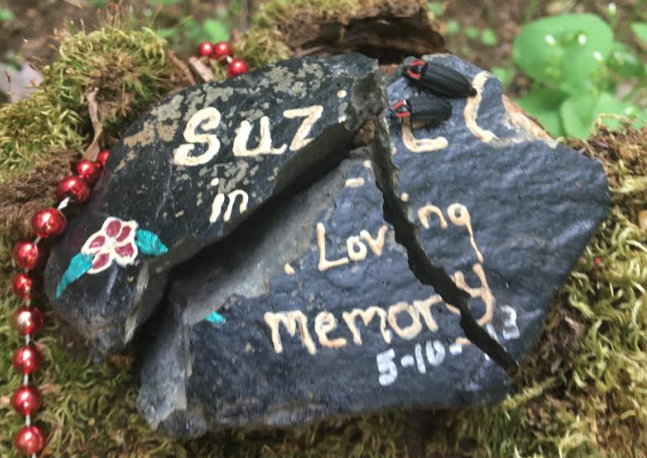 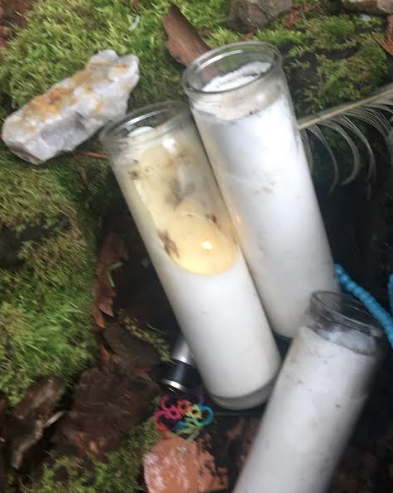 Readers of my last entry on hiking may have a question or two.

Like, “Really? It’s all wildflowers and beautiful scenery out there?  That can’t be the whole story.”

It’s not: My almost-daily Yankee Hill walks are indeed wonderful, but they’re not pristine. Man has left his unmistakable and often nasty imprint – even in this quiet neck of the woods.

First, there was that drive-by midnight dump I cleaned up a few weeks ago. But take a good look downslope as you hike these roads, and you’ll see more trash – mattresses, furniture, blankets, old clothes and more.

Then there’s what some of us call Burn Mountain. It’s about a mile beyond my place on Upper Yankee Hill Road. Briefly it served as a helicopter-salvage logging deck in the wake of 1994’s Creek Fire.  Then it became a hangout and a dump.  Still is, although the trash levels ebb and flow – as the occasional neighbor cleans it up.

About a half mile beyond Burn is “Ideal.” Ideal is the brand of the travel trailer unceremoniously pushed over the edge of the road maybe five years ago – in the middle of the night in the middle of nowhere.

A neighbor reported it, and the Highway Patrol put out cones to mark the spot.  Two weeks later, the cones disappeared, but the trailer did not. Ideal has become a distinctly un-ideal but enduring landmark.

It also left a question: Why didn’t its owners simply leave their banged-up trailer in a shopping-center parking lot? It would be so much easier to clean up that way.

Curious about whether Ideal would ever be hauled away, I called the Highway Patrol today. “We’ll send an officer right out,” a dispatcher told me. “Don’t bother,” I said. “You have more important things to worry about.”  “Not these days,” she answered.

But a Tuolumne County sheriff’s deputy instead responded. Chris Passeau, in charge of vehicle abatement, took a long look at Ideal.

“Well, it’s on Forest Service or BLM property, and I don’t think either agency will tow it out,” he said. “It would just cost too much.”

I suspected this would be the answer.

But in time, Deputy Passeau continued, the canyon brush will swallow Ideal up and the trailer will be “much harder to see.”

Ideal is hardly the first junker junked on our road.

When I first moved here in 1976, I would often run from my place to Five Mile Creek and back. A key milepost then was a 1950s-vintage Chevy panel truck pushed down the canyon a mile short of the creek. All that was left was the chassis.  Manzanita and buck brush snaked through its windows.

A few years later, it disappeared without a trace.  Salvaged by a classic-car restorer?  Removed by an art collector? Sold for scrap? Who knows?

Decades later, a trashed-up blue Datsun appeared on the banks of Five Mile Creek, apparently rolled down from the road. Although without any artistic or historic value, it vanished within two years.

I have saved the best of my man-made diversions for last: Suzie Q.

It’s at the very end of Five Mile Creek Road, by the banks of the creek itself. This is a shady, refreshing spot year round.

This area is also graced by blooming Tuolumne faun lilies, a rare species, for a few weeks each spring. And one of those yellow lilies flowers amid Suzie Q’s memorial.

Before going to a friend’s place to watch the Super Bowl early last February, I hiked down to the creek. It was a cold, drizzly Sunday morning, and I was bundled up.  I saw no one else.

But when I got to Five Mile, one of the candles at Suzie Q’s shrine had been lit. Protected by a cylindrical glass holder, its flame flickered against the winter breeze.

Nearly a week after the 49ers coughed up the Lombardi Trophy to KC, the rains eased and I returned to Five Mile Creek. Suzie’s flame was still burning.

“Now this is some Twilight Zone stuff,” I thought to myself. “How on earth has that flame stayed lit?”

The persistent flame and the shrine itself are unsolved mysteries, they are one step beyond. And I’m looking for answers. So if any reader knows them – or has the imagination to make up good ones – I’m all ears.