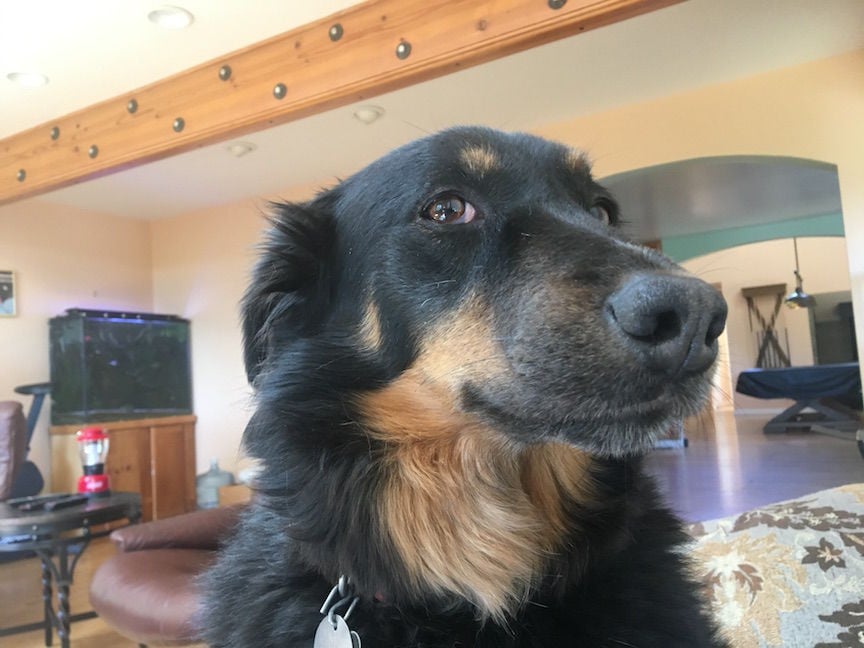 Lil, the day after her adventure. Chris Bateman says this is her defiant pose. 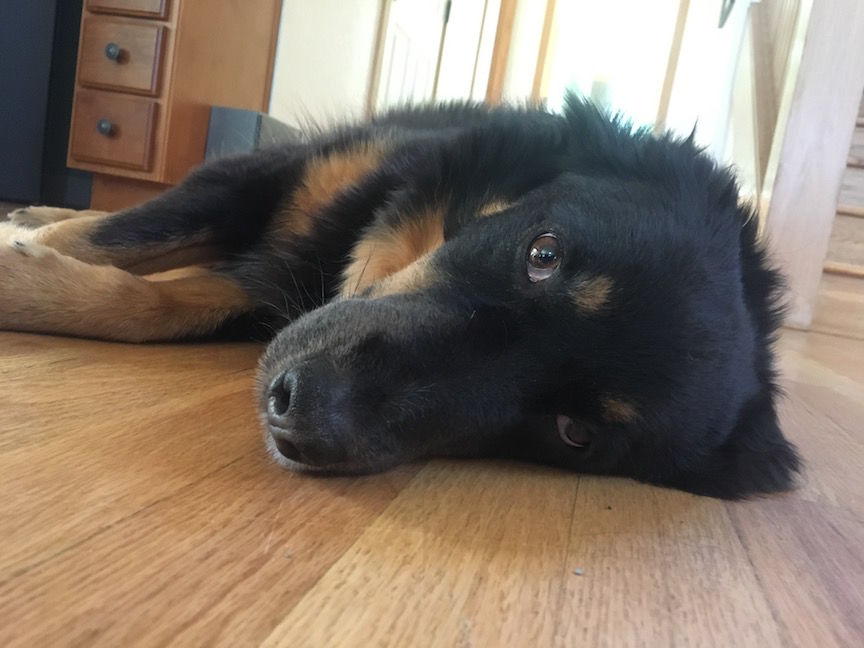 Lil, the day after her adventure.

Lil, the day after her adventure. Chris Bateman says this is her defiant pose.

Lil, the day after her adventure.

I didn’t think twice when Lil flushed out a wild turkey during our walk yesterday, then chased it into thick brush below Five Mile Creek Road.

This happens nearly every time we hike together. An Australian shepherd cross, Lil is a hunter. With sharp eyes and an educated nose, she regularly rousts out critters then gives chase.

So I was not alarmed by the cacophony of barking and gobbling that accompanied my dog’s pursuit. Within a minute or two, she would emerge from the brush defeated and turkeyless. Then our walk would continue.  As it has 99.9 percent of the time.

And the other .1 percent?

Well, Lil has caught and killed two squirrels and one turkey in the year and a half since I adopted her.

That I know of.

Many times she has sent wild turkeys flying high into the nearest ponderosa pine for refuge. But once she returned proudly to the trail with a young bird in her mouth.  This adolescent gobbler was clearly not yet wise to the ways of the woods. Or to the ways of Lil.

Sadly, I had to put that wounded turkey out of its misery. Happily, these birds are a few hundred miles short of the endangered-species list.

But yesterday I saw no turkey fly high to safety and Lil did not come back to me.

Instead I could hear her barking in short bursts while her quarry clucked and gobbled with what I imagined to be a degree of desperation.

So I began calling my dog. And calling her and calling her, for the better part of 30 minutes. I might as well have been in a silent movie. Someone had hit my mute button. Lil heard nothing.

My level of desperation mattered not a whit. Her attention was 100 percent on the imperiled turkey and zero percent on me.

Lil was like a teenager having the rendezvous of a lifetime and I was like Dad calling her to do the dishes.

Plus, I could see nothing.  Had Lil cornered this turkey? Had she treed it?  Was her quarry a hen defending her brood? I had no clue.

Because maybe 30 downhill yards of manzanita, poison oak and mountain misery were between me and my dog, I wasn’t about to claw my way through the brush in shorts and a T-shirt to find her.

So I began the long walk home without Lil, figuring she would eventually give up and run after me. She did not.

Halfway back I met my neighbor Claudia, outward bound on her dirt bike. I warned her that Lil could be on the road and detailed the predicament.  She took off, but returned in 40 minutes.

“Your dog won’t come up until dark,” she guessed. “I heard her down there, I called for her, but nothing.”

At home I loaded my pickup with Lil’s dinner, jeans and a long-sleeved shirt (in case I had to climb down through the brush), a flashlight and a good book – figuring I might have to wait for a while.

When I got to the chase scene, Lil was still barking and her quarry was still gobbling. I shouted for her, shook her bowl of kibble, got back in the truck, and began reading. I had 90 minutes to nightfall.

Lil was back in five, absolutely exhausted after a 90-minute adrenaline rush and with no turkey in her mouth. She inhaled dinner between pants, then crashed in the truck’s back seat.

At that point I wished I had strapped a Go-Pro on Lil’s head before the day’s hike. I wanted to know the rest of the story.

We got home and Lil went into dreamland quickly. And somewhere below Five Mile Creek Road, one lucky turkey also had a story to tell to her flockmates.

Today I took Lil on the same 5.5-mile loop walk, but kept her on the lead. But as we approached the scene of yesterday’s crime, she betrayed no awareness that anything dramatic had happened just 20 hours earlier. Life just went on.

So, yes, I will let my dog off-lead in the future. I don’t want to deny her the great freedom and fun she has untethered.

That said, if Lil emerges from the brush with a spotted owl or a yellow-legged frog, I may have to rethink my strategy.