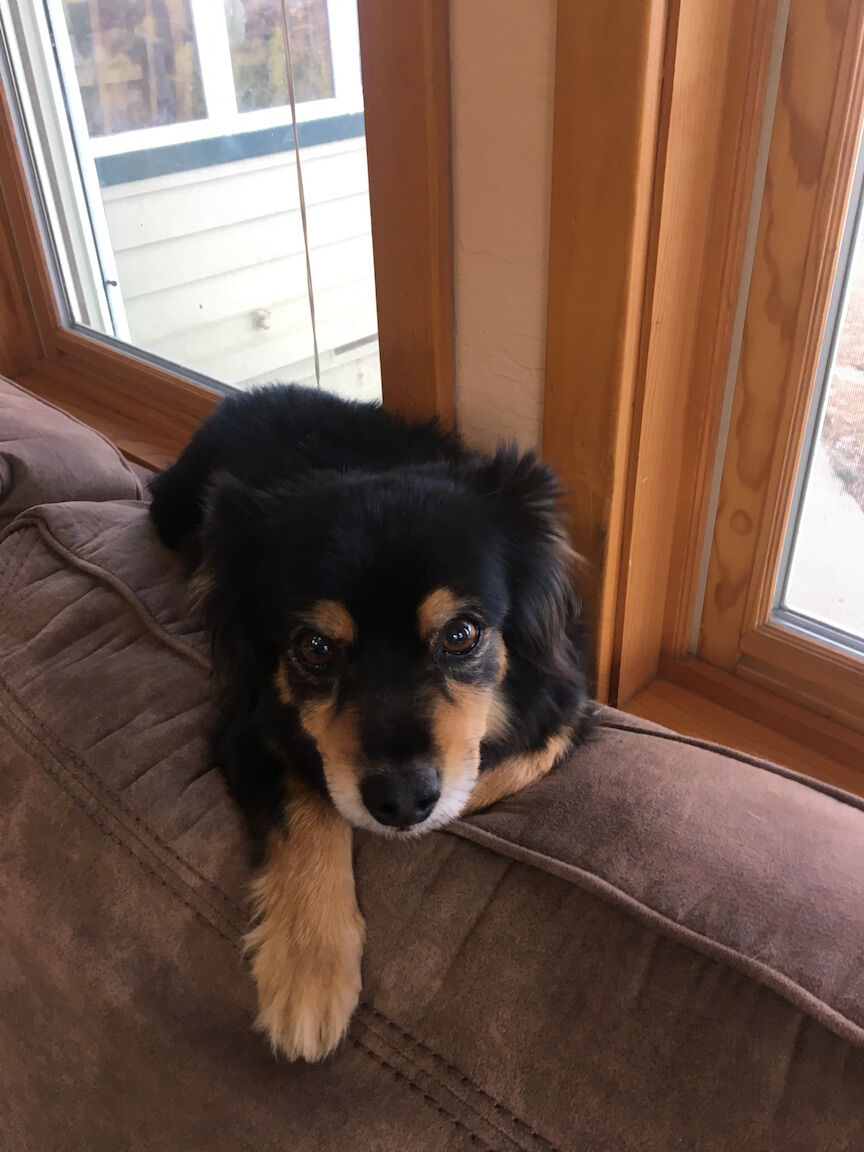 Roxy makes herself comfortable atop the living-room couch during her less-than-24-hour stay on Yankee Hill a year ago. 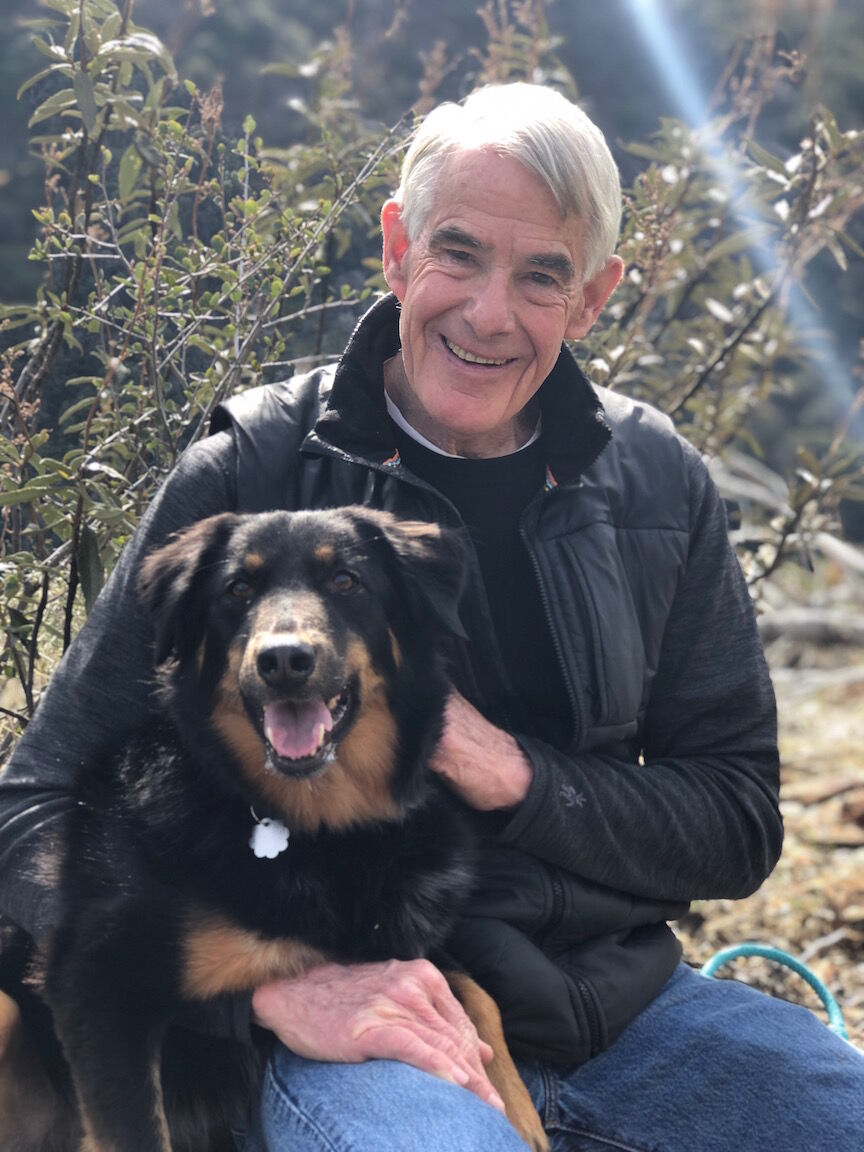 This dog look familiar? My dog Lil, who bears a certain resemblance to Roxy, getting ready for a walk with me back in 2018.

Roxy makes herself comfortable atop the living-room couch during her less-than-24-hour stay on Yankee Hill a year ago.

This dog look familiar? My dog Lil, who bears a certain resemblance to Roxy, getting ready for a walk with me back in 2018.

So, today I have a year-old mystery that involves a stray pup named Roxy — who looked like a miniature version of my own dog, Lil. Not only that, but this tale has a happy ending.

Except that I have only sketchy details of the ending itself.

My part of this story began on Jan. 1, 2020, long before any of us suspected what the year might bring. I ended the day taking a seven-mile walk with Lil, an Australian-shepherd cross I had adopted in early 2018 through Friends of the Animal Community.

She’s been my constant companion since, and we’ve probably put in more than 2,000 miles of hiking since she joined me here on Yankee Hill. Lil probably knows every creek, canyon, gully and hollow on the half-dozen hikes in our regular repertoire.

Last year’s New Year’s walk, however, ended with a surprise: When we got home, a stray puppy was waiting for us. She looked scared and disoriented, but was friendly and came right into the house when invited.

I was ready to call her owner, but the stray was without a collar and tags. So, after giving the pup some food and water, I put her in my car and we started visiting neighbors.

Maybe one of them had just adopted this mystery pooch and hadn’t had time to get a license. Or perhaps the pup belonged to a holiday guest. No luck — although all of my neighbors thought she was as cute as can be, and one was ready to adopt her on the spot.

So, we went back to my place, and the pup made herself right at home. She reclined comfortably on top of my couch, and when nighttime arrived she curled up on Lil’s dog bed.

Lil then gave me a look, so I moved the new arrival onto my own bed. The next day, I decided, I’d go to Animal Control and have her scanned for a microchip.

But in the morning, I first called a Calaveras County friend whose older dog had died some weeks earlier. “I just might have a puppy for you,” I said, texting her a photo of the Lil-lookalike.

But that adoption was not to be: Animal Control scanned my wandering guest and, sure enough, she had been chipped. Her name was Roxy. “And her owner doesn’t live too far from you,” the attendant told me. “He’s on Big Hill Road.”

I was happy the pup and her owner would be reunited. But a couple of days later, I thought the lost-and-found dog might make for a heartwarming New Year’s yarn. So, I called Animal Control back.

“I know you can’t give me the owner’s phone, but maybe you could call him, give him my number and just let him know I’d like to talk,” I told the attendant. “If he doesn’t want to, that’s fine. Just let me know in either case.”

Yes, I was curious (and still am) about how this pup got loose. Had she wandered from her home? Did she race away from her owner on a walk?  Did she wriggle out of her collar? Or — as has happened to me more than once — had her owner become distracted for a few seconds only to look up and find his pup had vanished?

But Roxy’s owner never did respond. Or maybe he was never contacted. I called Animal Control two or three more times, repeating my request, but never got an answer.

This did not bother me: I realize that AC has far more important things to worry about than helping a writer neatly tie up a lost-puppy story. So, I promptly forgot about it.

At least I did until New Year’s Day 2021, when I suddenly recalled Roxy’s short but enjoyable visit. “She’s probably gotten a lot bigger,” I thought. “Does she now look even more like Lil? Is she still with the same owner?”

So, while stopping at the Animal Control office last week to renew Lil’s license, I recounted Roxy’s tale to a staff member. “Would her information still be on file?” I asked. “We’ll check,” she answered.

My phone rang 15 minutes later. “We have no records on that,” an Animal Control officer told me.

So, unless Roxy’s owner or a friend of his reads this and gets back to me, the pup’s story will remain an unsolved mystery. Which really doesn’t make the tale any less charming.

Meanwhile, that Calaveras County friend whose dog had passed away ended up getting a Lab-Great Pyrenees-cross puppy that weighs about 100 pounds, is still growing, and by all accounts is a delightful companion.

(Know Roxy or the rest of her story? Feel free to email me at chrisbateman1908@gmail.com)