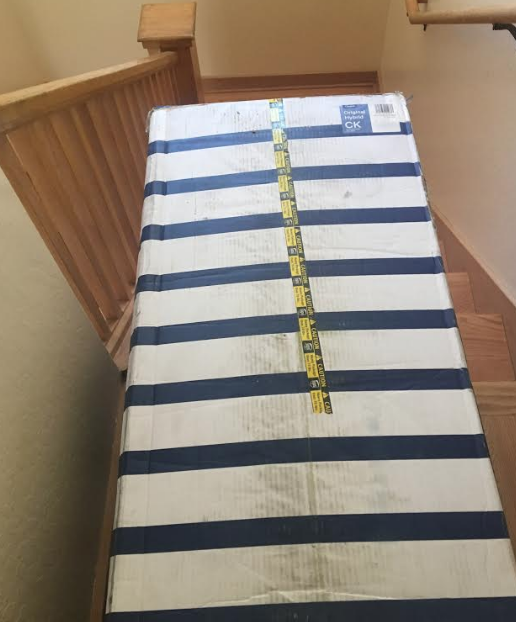 New mattress at the top of the stairs. 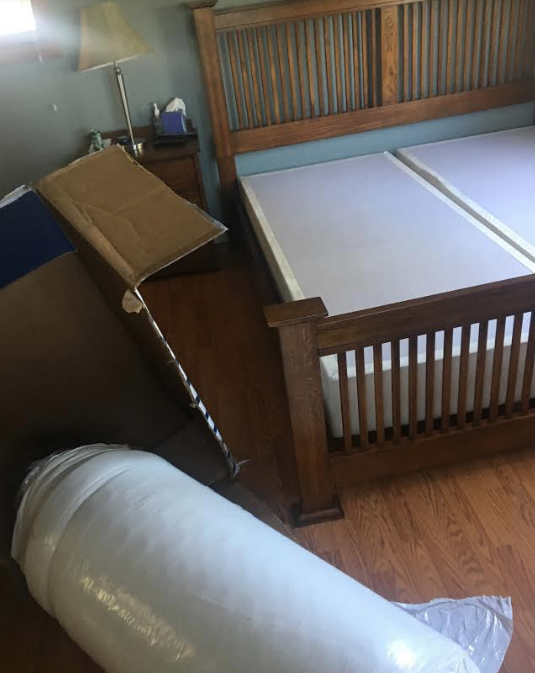 New mattress at the top of the stairs.

Now I’m in the hands of the Sustainable Evolution Team. Its job? To get me a total refund on a mattress I once bought, never had, and now don’t want.

The Sustainable Evolution Team is part of the trendier-than-thou Avocado Green Company, which sold me that mattress. At normal  companies, it might be called “The Returns Department.”

Those of you whose post-lockdown minds are totally uncluttered might remember a diary entry I wrote in early June: “Geezer tries to buy a mattress.”

This is Chapter 2.  But I don’t end up with an Avocado Green, even though Consumer Reports says it makes the best.

AG’s rub?  Its service is not the best: It took me nearly 10 days to talk to a human being at Avocado. This was after I had refused to join a “virtual retail experience” or to take an online tour of its “Experience Center.”

I was in no mood for anything virtual, and had run out of patience. Then a “Brand Experience Advocate” named Aaron asked me online to “rate my experience with AG’s team.”

I hit the roof, firing off a seething email pointing out that I had had “no experience” with Avocado and would look elsewhere for a mattress.

Next Aaron actually called me and, despite his title, he sounded kind of like a human being. “I understand your frustration,” he said. “My dad’s about your age and he wants the same things you do.”

So I softened up, ordered an Avocado mattress, and was OK until a week later.

That’s when FedEx called: They had my mattress, but its trailer-truck was too big to make it up Yankee Hill Road. So I’d have to drive down the hill, muscle the mattress into my pickup truck and haul it up myself.  And that “in-home set-up” fee I had paid? Well, I’d be refunded.

I called AG to complain. No one answered.

But an hour later I got an email stating that “due to increased demand” it would take Avocado Green “eight to 10 business days” to deal with my problem.

So I decreased AG’s demand: I declined delivery, canceled my order, and asked for a total refund.

Aaron pleaded once more in a final email, but I told him I’d be instead buying from a company “that has real people answering its phones and can bring a mattress to my door.”

That company would be Casper, based in New York City.

I called the firm and within two minutes was talking to a human being (a “snooze specialist” in Casper’s corporate-speak). Within 10 minutes, I  had placed an order. Next, I was transferred to a shipping expert, who promised delivery to my door.

Had I gone to mattress heaven? Not quite.

Friday morning Casper sent me an email:  “This is your day!” it said. “Your shipment is out for delivery.” I waited all day. It never arrived.

Working up a second head of vitriolic steam, I called Casper Saturday morning.  “UPS will be there mid-afternoon today,” promised a real rep.

And when I came back from late-morning errands in Columbia, my mattress was there.

I shouldered the 130-pound box onto my deck and shoved it into the house. Next, I hoisted it, end-over-end, up the stairs and into my bedroom. I yanked it out of the box, tore off the plastic wrapping and  muscled it into the frame. It fit perfectly.

Finally, I flopped down onto the new mattress, exhausted.  It felt wonderful.

But my brief repose gave rise to questions:

Have I become crotchety and impatient in my old age? Is expecting straight talk and clear English from a retailer now above and beyond? And is it unreasonable to want to talk to a fellow human being before making a substantial purchase?

But, stepping back to look at the big picture, do I have any real cause to bitch and moan?

After all, millions of people around the world sleep on dirt floors – and I just had a very nice mattress delivered to my doorstep.

In my defense: Those millions of dirt-floor sleepers will never have to deal with a Sustainable Evolution Team.